Being two of the greatest games ever made, both directed by Shinji Mikami and published by Capcom within one year of one another, it should come as no surprise that there are similarities to be found between Resident Evil 4 and God Hand. But I am here to tell you that despite inhabiting two very different genres, the two games share the same core with certain elements exaggerated or diminished to create different, yet similar experiences. Thus making them essentially the same game. If you squint. Like, a lot.

This is the Grand Resident Evil 4 / God Hand Unification theory. Or to put it succintly, the GRE4GHU theory. Which you really should't, because people will think you're trying to summon a lesser deity or something. Anyways, onwards onto the discussion! 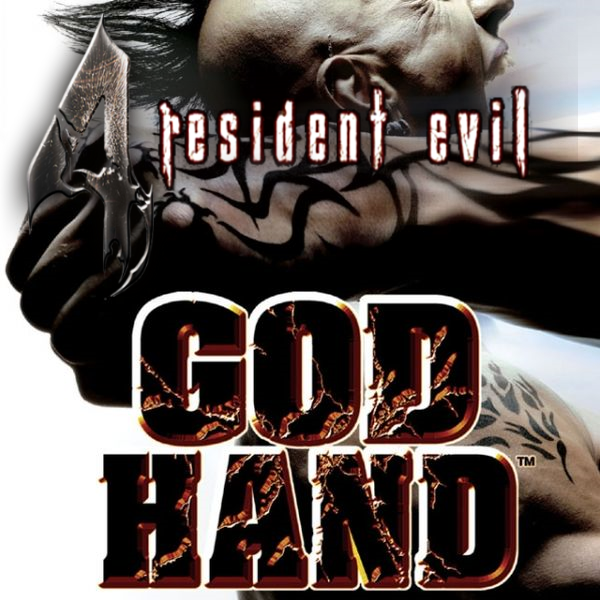 While the stories of the two games have their similarities (loads of corny writing, fighting an old man who transforms into a giant insect crab, an inexplicable giant animatronic statue), I'm mostly concerned with the gameplay, starting with the camera and basic movement controls.

Both games use tank controls (plus a handy 180 degree quick-turn) and let you either walk or run to move forward, with Gene's dash being ridiculously over-powered when compared to Leon's brisk jog. The camera is positioned over-the-shoulder, which is extra important in God Hand, as it gives you a good view of enemy attacks, which you'll need when dodging.

Moving on to combat, both games revolve heavily around group management and follow the same flow of events when it comes to individual enemies. By shooting/punching skillfully, you stun enemies, which then opens them up for a grab/melée attack (hopefully a suplex), which makes you temporarily invincible while it deals damage.

The grab is much easier to set up in RE4, since you only need to shoot an enemy in the face for it to trigger, but to balance things, the resulting grab is much weaker than it is in God Hand. It's more meant as a way to knock enemies back and create space (since getting Leon to dodge attacks by moving is rarely a reliable approach), whereas in God Hand it's a juicy amount of damage meant to reward incessant beatings of someone's chin.

While the core gameplay loops of these games are great, what really cranks up the appeal is the hoarding and subsequent usage of special resources in just the right circumstances. Our brains are keen to release copious amounts of dopamine whenever their hoarding tendencies feel justified. You can thank evolution for that one.

RE4 has different ammo types and God Hand has Roulette Orbs for Roulette Moves, the odd metal club and the Tension Gauge for releasing the power of the titular divine appendage. What separates the games here is the differences in power and availability of their resources. Ammo in RE4 is plentiful and you're allowed to carry a lot of it. This means any individual pickup isn't that special and that it'll take you a while to run out. This makes sense, as without any ammo, you only have the knife to depend on, which really isn't meant to carry you through a whole combat encounter.

God Hand on the other...hand, makes the protagonist stronger without any resources (you can't really run out of drop kicks, now can you?) and makes each pick-up so much more powerful than ammo in RE4 while heavily restricting how much you're allowed to carry. Of course, to balance this, they made the enemies so hard that you're gonna be wanting to spend super moves and become invincible by releasing the God Hand in close to every encounter. I'll fight the Bella sisters with just a handgun any day instead of dealing with a level 2 demon without any Roulette Orbs or Tension gauge in God Hand.

And speaking of those demons, both games have a mechanic where common enemies can turn into elite enemies. Plagas in RE4 and the aforementioned demons in God Hand being said elite enemies. In my experience though, I'd say that the Plagas are much more predictable than demons across playthroughs, whereas demons can appear to shit on your proverbial birthday cake whenever they feel like it. Of course, that makes it all the sweeter to save up some Roulette Orbs so you can baseball them into oblivion before they get a chance to slap you silly.

Now, your experience with the demons in God Hand is heavily predicated on your luck, which dictates the nature and availability of your pickups. There are some static power-ups in the game, but most of them will be randomly dropped. As such, the amount of effort you'll have to exert in a particular section of the game will vary from playthrough to playthrough (or from retry to retry), which increases replayability. For comparison, the pickups in RE4 are mostly static, with most of the random rolls deciding how much money you get, making playthroughs pretty deterministic should you play the game the same way multiple times.

With the dynamic difficulty system in place though, playthroughs in RE4 aren't technically that deterministic, but since the difficulty modulation stays in the background and matches your skill pretty well, it might as well be. You'll only notice it if you die a bunch and keep in mind how damage and health numbers on enemies change between attempts.

For comparison, the dynamic difficulty system in God Hand remains in your face throughout the whole game and holds your experience by the balls. As soon as you change difficulty level, enemy patterns will shift drastically, either making them slower and weaker or faster and stronger. God help you if you find yourself fighting a demon on Level Die without a plan. At that point you might as well run to the next room and forget it ever happened.

Now, I could talk about a few other things (the QTEs, how the setup of both games incentivizes survival and getting as much money as possible over explicit displays of skill like in Devil May Cry, Krauser's charge in Mercenaries being a Roulette Move), but I think talking about and comparing the main mechanics is enough.

Holistically speaking, I'd say RE4 is a "smooth" experience, while God Hand is a "jerky" experience. RE4 isn't as much of an emotional rollercoaster as God Hand is. It can be tense and is very satisfying to play, but with how low the skill ceiling is when compared to God Hand (Aim at face -> Shoot -> Suplex -> Repeat until victory or until you need to throw a grenade), there aren't many situations you can't get out of easily. I mean, when you have access to a shotgun as magnanimous as the one in RE4, it's your own fault that something came close enough to harm you.

God Hand doesn't play that way. God Hand throws you to the thugs in minute one and expects you to play as scummily as possible to win. This includes throwing boxes, abusing aggro ranges and kicking people in the dick. As such, it's a lot more frustrating, even when you know what you're doing. But good god if it isn't satisfying when your skills, rough plan and luck aligns to let you completely disarm a difficult situation. Both approaches are legit of course, as the exquisite quality of these games prove.

As a game designer, it pays to play around with mechanics, as I have hopefully proven here. Maybe by mixing alien elements together (fixed camera angles and frame-perfect action input) to create something like Onimusha or by abandoning a key element (ditching the stamina meter in Dark Souls) to create Sekiro: Shadows Die Twice.

If there's one thing I want you to take away from this it's that one of your favorite games could have their elements and mechanics shifted around to create something different, yet equally excellent. Who knows, maybe you could jury-rig the shooting and shield mechanics from Halo 2 and make something that makes playing Rez feel like a sleeping aid in comparison. Never hurts to try. Unless you're on a budget with money-hungry investors at your feet. Then you might lose a toe or two.

Now if you excuse me, I need to figure out another way to justify writing about God Hand and RE4 in 2020 before the rumored R4make hits store shelves. I can't let all these new-fangled video games that refuse to rip off God Hand and RE4 remain in the limelight unopposed. I will not rest until I get to suplex cultists and gorillas in more games, dangit!