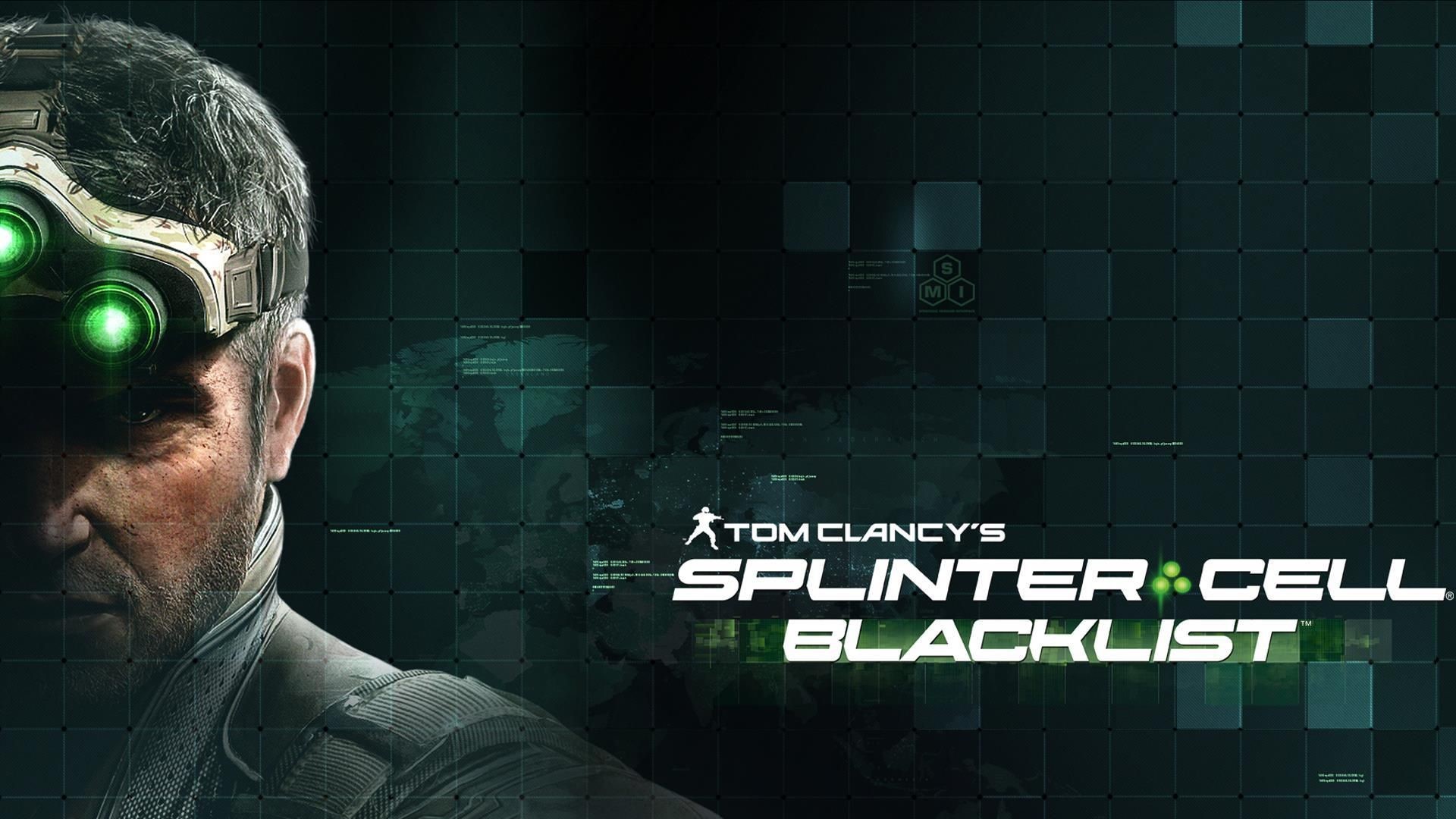 Time to pull out the night vision goggles one last time, as for it’s the final Splinter Cell ranking blog (for now). You can find the rank itself at the bottom, while the rest of this text is my way of explaining why I ranked this game where I did. Without further ado, let’s get into it.

A group known as the Engineers attacked a United States military base in Guam, but that was only the start. The group publicly announced “Blacklist” attacks every week against the U.S. until it recalls all troops stationed overseas. In response, the U.S. President forms Fourth Echelon, assigning Sam Fisher and others to the group in hopes of stopping the attacks. The game then follows Fourth Echelon as they fly around the world in a heavily modified cargo plane trying to stop attacks before they start.

Story has never been a major factor for me with this series, but this game had more of my attention, for better and for worse. The biggest hit to the story is Sam Fisher himself, who dawns a new look and voice. Sam is faster and more nimble in this game, so I get wanting to have a younger look and voice; but Michael Ironside’s voice is, in my opinion, more iconic than Fisher himself, making this a notable loss. The other weak link to this story are the bad guys. The Engineers throughout the game act in a way that hints a deeper motive, but that motive doesn’t exist by the end. Not all of it is bad, however. The story was more engaging for me, as for this game follows a constant stream of atrocities instead of slowly building up to one at the end. Also, the characters are more memorable in this game, which I think is better considering I don’t remember a lot of the characters in the older games. Story is still a smaller aspect to this game overall, but it does play a larger role here compared to the others. 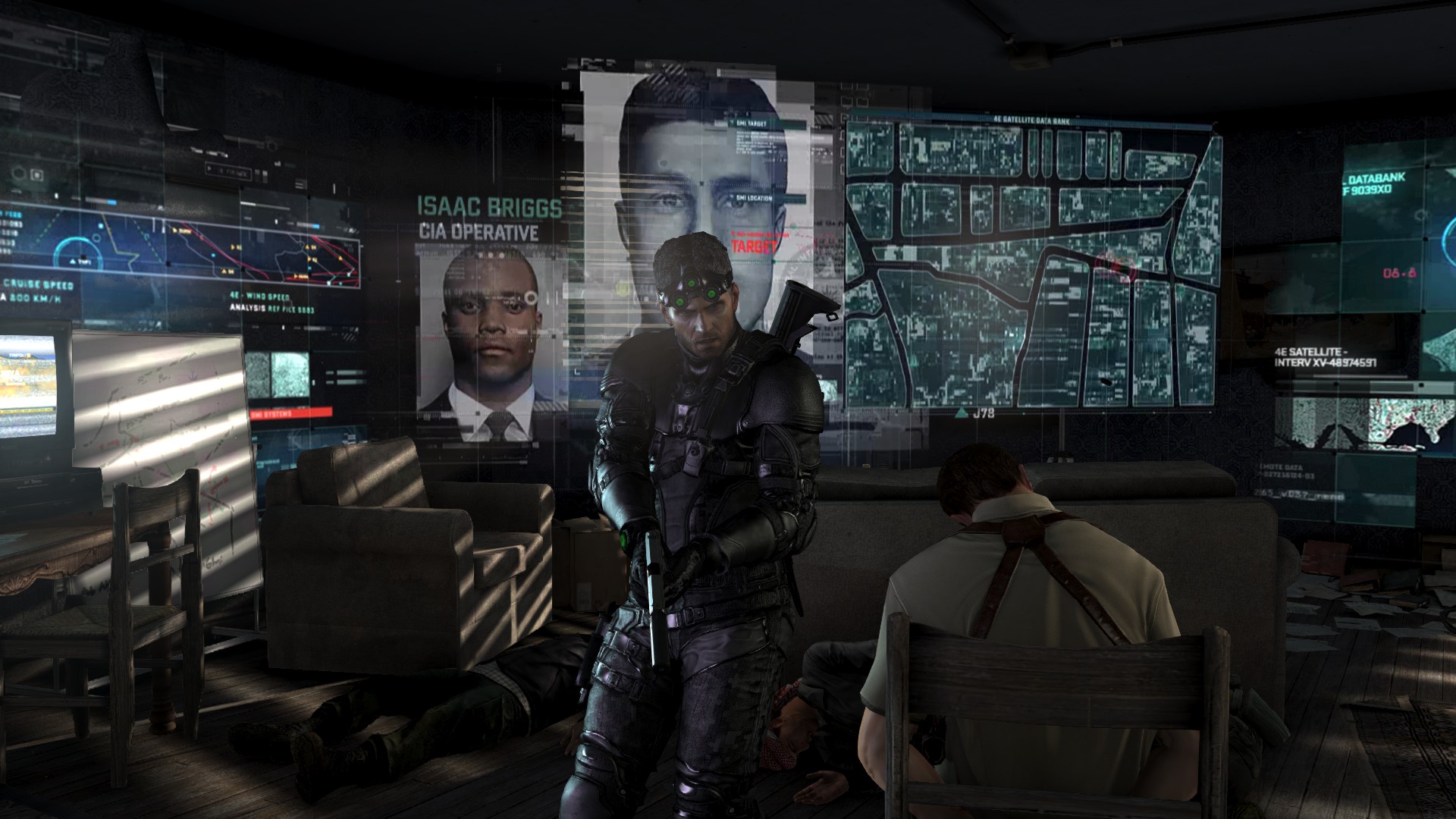 This game has more of a cast of characters compared to the others.

Conviction is a sequel to Double Agent story-wise, but Blacklist is a sequel to Conviction gameplay-wise. Conviction is my least favorite game in the series because of its gameplay, as for it lacked identity and stripped away a lot of what makes the series great. I understand evolving the gameplay alongside the evolution of a new console generation, but Conviction took that generational shift and turned the series into a basic cover shooter with no incentive for stealth. This game takes Conviction’s newer gameplay and tries to bring it back to its roots. And while it doesn’t live up to the highs of Chaos Theory, what is there is still pretty good.

Stealth, the key component to this series, was lacking in the last game. Fortunately, this game makes up for it in many ways. Bodies can be moved again, and there are even hiding spots for bodies. One positive from the last game, the last seen silhouette, is back. Shadows are still unfortunately binary, but there are green lights on Sam’s body to indicates whether he is in a shadow or not instead of the colors going black and white. Night vision is useless in this game, but there are many goggle options, and I found sonar vision to more than make up for night vision’s shortcomings. The default movement speed can be changed between walking or running, which isn’t as great as the older games, but is still a valuable option. Enemies, on the other hand, are a bit more mixed. While there are some neat things like noticing opened doors, they are usually pretty dumb. For example, if you run off and leave a silhouette, guards will only focus on that silhouette. This means you can stand a few feet from your silhouette and watch guards only stare at your ghost instead of you. There are other elements of stealth I will touch on soon, but the core stealth systems of this game are a huge improvement over the last game.

Conviction made the change from the SC-20K to an arsenal of weapons that can be equipped and customized. Blacklist takes that concept and gives it a serious upgrade, offering a wide array of customization. At the start of each mission, you can choose from a wide variety of weapons, and each can be customized. On top of that, there are different armor options, different goggle options, and different gadgets like smoke grenades, noise makers, a camera drone, sleeping gas, and much more. All of these options can be customized and upgraded, and a lot of these items have different stats. All of these options are great, as for they give flexibility to different play styles. This may seem against what the series is about, but I think having a level of freedom to how you play helps widen the audience while still keeping its core. 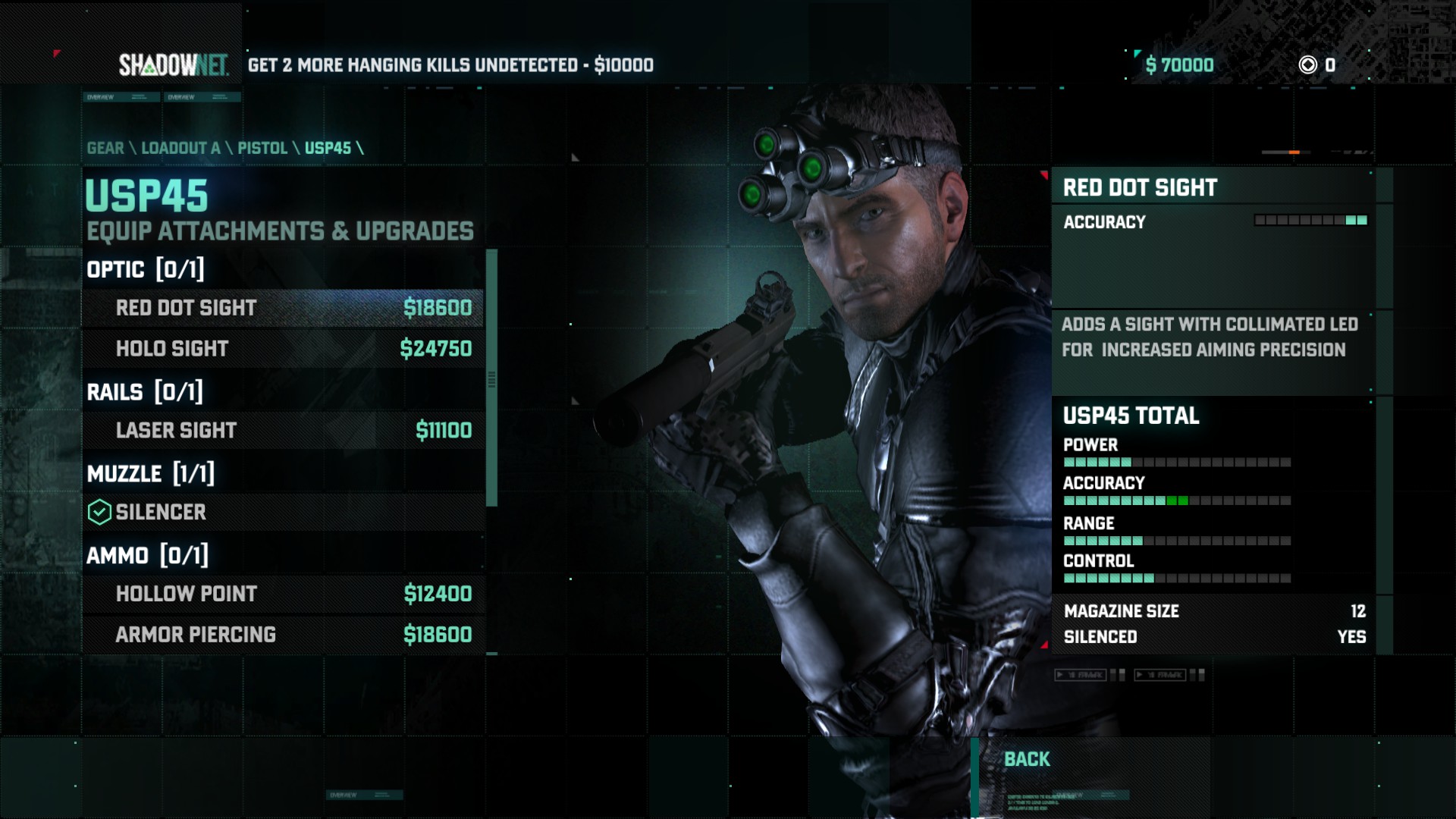 There are a lot of weapons and attachments to try out.

How do you get these items? Through the all-mighty dollar, of course. Money is earned through completing missions, but there is another, more notable way of earning it. Shadownet is what I could best describe as a social hub and a progress tracker for the game. I didn’t pay attention to any of the social elements like the leaderboards, but I did look at the other half of Shadownet, which offers daily challenges, weapon challenges, and more to complete for money. On top of the loadout options, money can also be spent on upgrading the plane, which unlocks various items and upgrades. The higher level of progress and customization offers more flexibility and a reason to go back once the credits roll, which is more than I could say for a lot of these games.

Once the loadout is complete, there is actually playing the levels. Here is where the game’s flexibility shines, though there are a few rough spots. Levels feel more open compared to the rest of the games, and they have more options as to how to tackle them. Each level has three different rating systems that scores performance based on three categories: action, lethal stealth, and nonlethal stealth. I love this rating system as for it offers a reason to go back to levels and try different play styles while also showing the flexibility of the gameplay and items. Yes, that means the option to go loud and turn the game into a cover shooter is available, which does feel antithetical to the series, but I found there are greater incentives to be stealthy over loud unlike the last game. At the same time, missions like the Guantanamo Bay level are a callback to the older titles, forcing nonlethal stealth only. Some of the levels, however, aren’t so great. There are a few day levels, which broke the immersion for me because I found it hard to believe that hiding in a shadow during the day worked just as well as in the night. There are also these weird levels called “Gone Dark,” which are essentially text adventure games that popped up at random times are pretty much time wasters. Finally, there are a few levels where you play as Briggs, one of your crew members. Playing as Briggs in-and-of-itself is fine, but these levels switched to the first-person perspective. I thought they were neat at first, but these levels highlight the issues I had with the controls. 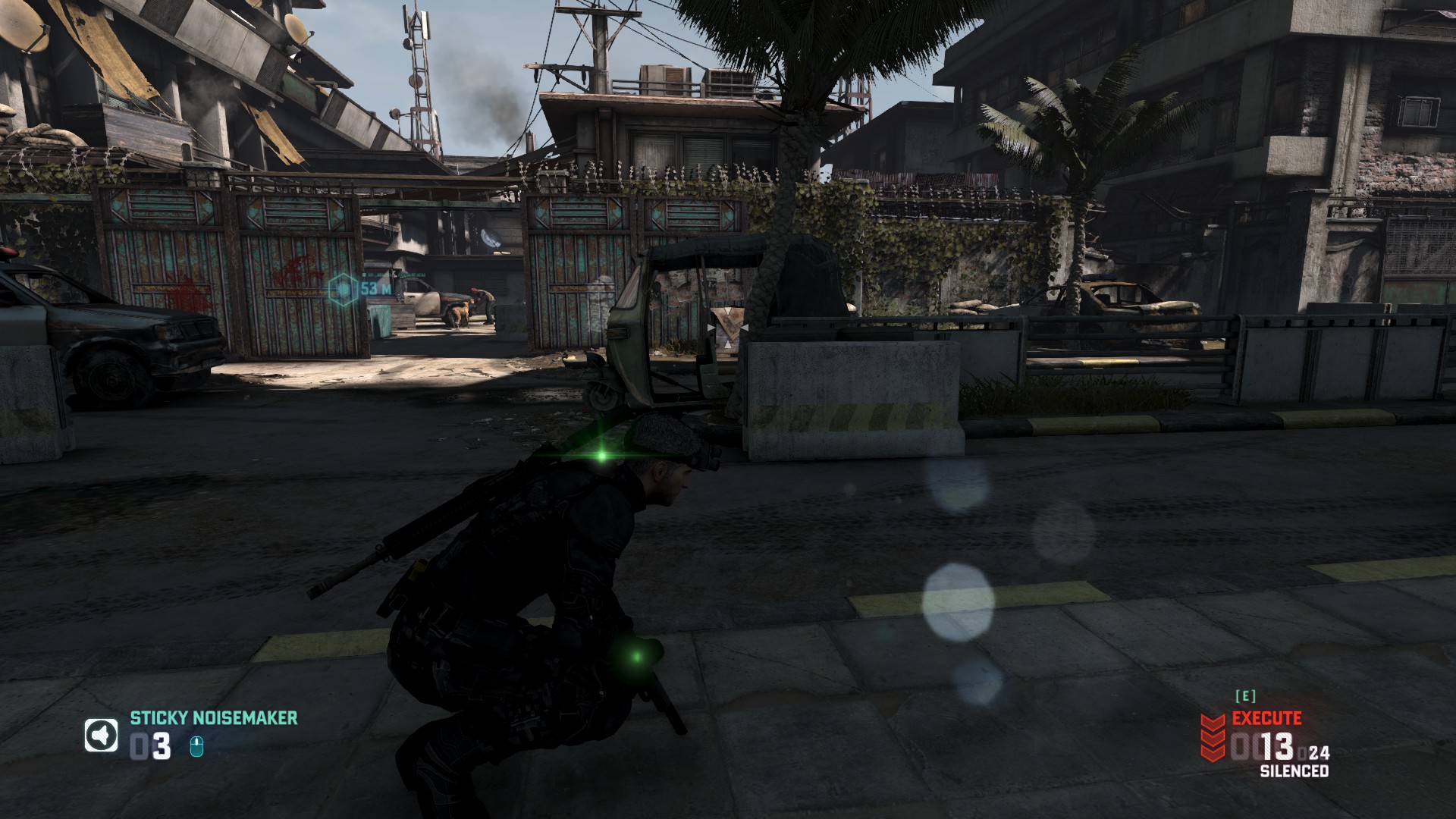 Trying to be a tactical stealth operative during the day feels off.

The controls and movement abilities aren’t the worst in the world, but they could’ve been better. Aiming is clunky, and the FPS segments with Briggs highlights this issue. The silver lining to this issue for me, however, was that it desensitized going loud. Also, the controls in general are weird, and while I do have the ability to change them, I found it hard to considering how easily things can screw up with changing around a lot of controls. Finally, you can’t swap shoulder outside of one scripted moment, which simply makes no sense to me. Not all of it is bad though. There are movement abilities in this game I quite like actually. Conviction’s execution ability is back, allowing you to paint targets and kill in rapid succession. Aslo, parkour in general is a lot faster, and there are a lot more pipes, ledges, and windows to climb in this game.

Outside of the main campaign, there are co-op missions and multiplayer. Multiplayer was dead when I played, so I have nothing to say on that, but a lot of the co-op missions can be played solo. There are four types of co-op levels: an objective-based level that requires stealth, a wave-based mode, hunter mode from the last game (kill all enemies in the level), and a fourth that requires a partner. These levels are smaller compared to the campaign, but they still offer the same level of openness and fun that the campaign offers, and I had a good time with these levels as well.

In conclusion, Splinter Cell: Blacklist is a game starting to find its own identity on a different console generation. It still feels like a game trying to reach a wider audience, but this time at less of a cost to the core audience. This isn’t my favorite Splinter Cell game, but it is one I am most likely gonna go back to and play some more of. With that said, I am going to rank this game in between the first game and Pandora Tomorrow in the number three position, and I hope that this won’t be the last time I talk about this series.