Don't sleep on Streets of Rogue 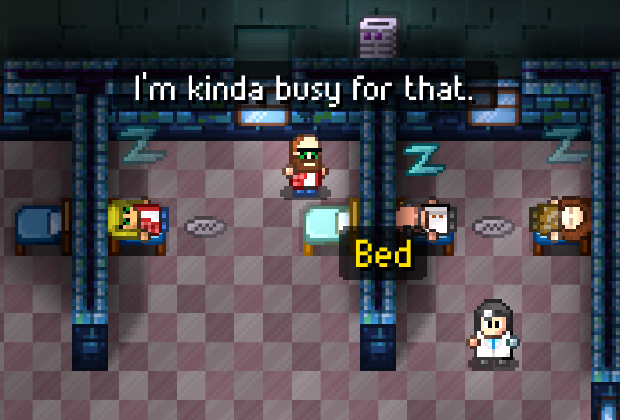 There are beds and you can't sleep in them, this garbage writes itself

So last week, Dtoid posted this "Best Games by One-person Devs" thing, and there's some cool games there. There's also a bunch of cool games in the comments that weren't included in the article proper, alongside some discussion over what exactly counts as being "made by one person." But not a single solitary comment mentioned Streets of Rogue, and that means I have to tell you about one of my favorite indie games of the last couple years. It's the best roguelike you're not playing. 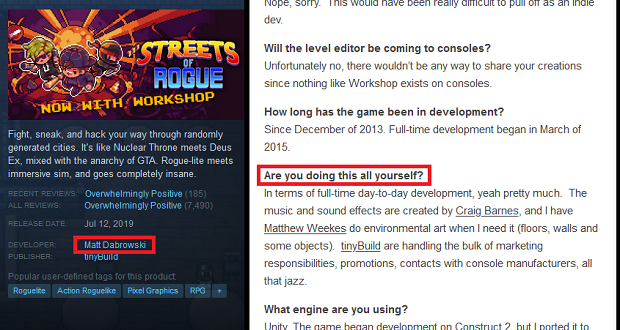 Of course, there are reasons you're not playing it. It's an indie pixel-art roguelike and those words don't necessarily mean "quality." The original Spelunky came out over a decade ago; the fatigue is real. Most websites didn't bother reviewing it. Also, that title kind of sucks. It sounds like it wants to be a randomized version of Streets of Rage (which just sounds like a bad idea at its core) but it's immediately clear in screenshots that this game isn't a belt-scroll beatemup. So what is it?

It pitches itself as a mix of roguelikes like Nuclear Throne and immersive sims like Deus Ex, which also kind of sounds like a bad idea maybe, but unlike The Binding of Isaac (Zelda) or Rogue Legacy (Castlevania) it's hard to make a direct "It's like ___ but roguelikey" comparison.

More important than any one influence, though, is the rare trick that Streets of Rogue manages to pull off. Its levels are more than just obstacles and enemies: They're a set of interwoven systems and rules that allow and encourage emergent play. 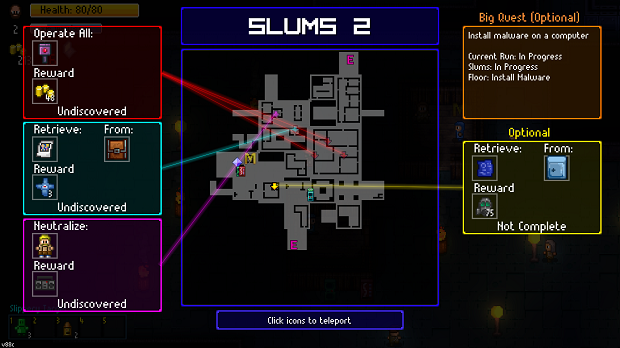 In case it isn't clear, I'm using the term roguelike pretty broadly, in the "ProcGen+permadeath" sense

Streets of Rogue does this in a few different ways. First, its map generation is much more open. Any good roguelike dungeon will have some branching paths and exploration, but if there's a room between the player and their goal, the base expectation is the player will likely have to go *through* that room. Streets of Rogue generates buildings to construct its maps, and each building has space around it. This creates a mini-open-world "outdoor" element where the player can roam freely and choose which buildings to enter and when, if ever, to enter them.

This freedom of movement means that simply reaching the exit is practically effortless, so the game also creates a few goals for the player to accomplish before leaving. Typically this is a matter of finding and interacting with the right person, item, or place. It's impossible to leave before these quests are resolved, but "resolved" doesn't necessarily mean "completed." It's possible to fail these missions and still continue on, without whatever rewards were attached to the quest. Occasionally, it might even be preferable to intentionally fail a quest rather than face the danger of fulfilling it. 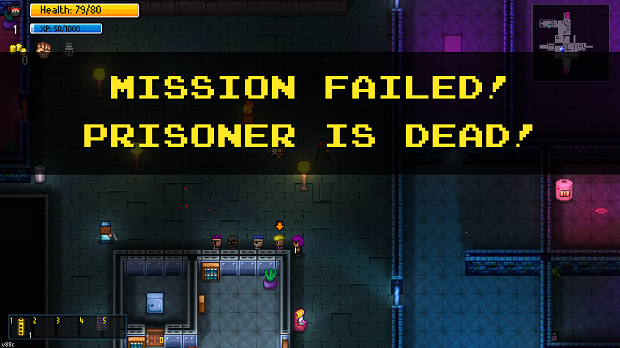 Yeah, I got some poor sap killed just for this screenshot

Then there's the enemies: You don't have any. At least, not yet. Under normal circumstances, all NPCs on the map start out neutral to the player. Granted, cops patrolling the streets are almost enemies, since completing the map's objectives will typically require some amount of "crime." Likewise, armed goons guarding restricted areas turn hostile the moment they see you trespassing, which is pretty much textbook stealth game enemy behavior. But because you have to enter their space before you're 'trespassing,' the player gains agency in when and how (and potentially if) that conflict plays out.

There's several NPC types, and they have relationship/alignment values with each other, not just with the player. Red Gang hates Blue Gang, and they will attack each other on sight. Cops will react to violence that they see, whether it involves the player or not. Dynamics like these ensure that chaos will spring up sometimes, and it's not hard to give it a little push. Loyalty can be bought, and characters can be manipulated. It's hard for any game to make social solutions work, but here it's about as valid as stealth or violence.

Now, that's only really possible because none of it is incredibly deep. The base gameplay isn't really special. It's a twin-stick shooter with melee attacks and some stealth/line-of-sight mechanics. All other interactions are menu-based (shops and trade windows, “dialogue” options with prices, use-item-on-object progress bars) and this is Streets of Rogue's single biggest drawback: Different strategies don't always feel different in gameplay. They're all just specific applications of the same basic 'modes' of play (Combat, stealth, progress-bar actions) and that hurts the game's long-term staying power.

The saving grace is that each solution to a given problem has meaningful strategic factors that make it distinct. There's different risks and rewards with each option, and most actions cost items, money, or ammo. This element of resource management is supported by the procedurally generated city, ensuring that the player gets a variety of scales to weigh. 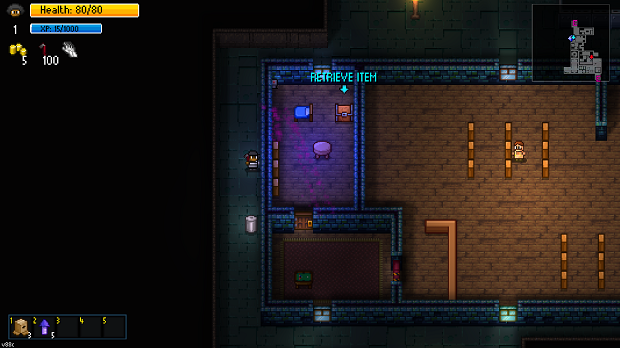 Let's dive into an example

That's me, in the thief-stripes, creeping in the alleyway. One of the floor's missions is to get some blueprints for who-cares-what out of that chest, which is in the back of this shop behind a locked door. Because I'm a thief, the shopkeeper standing between those bookshelves will chase me out on sight. But he's holding the key, and if I can slip in behind him, I can use the thief's pickpocket skill to claim it as my own, then sneak behind the counter and go loot the chest. Alternatively, if I'm not out of lockpicks, I could try skipping the pickpocket part of that plan.

I'm gonna skip more than that. I'm gonna use one of my window-cutter items to bypass the shopkeeper entirely and hop right into the room with the chest. As long as I avoid the camera, he won't know I was ever there.

But what if I hadn't picked thief? Any character could break the window with a punch and climb through, but then I'd be spending HP when I cut myself on the hastily broken glass. I could always kill the poor shopkeeper and get the key that way. If I was a gangster, I could even have my homies do it for me. Or maybe I could use some kind of explosive and blast the wall open. Not a subtle approach, but it gets me access. If I was a cop or a doctor, I wouldn't have to kill the shopkeeper: I could just cuff him or sedate him, respectively. And if I was a comedian, I could walk up, say "Derp derp" at him, and with a little luck, he'll think that's so funny he'll be willing to hand over his keys and let me take the macguffin for free.

I’m not exaggerating. That’s the comedian’s gimmick: Tell a joke (with placeholder derp text, because writing jokes is hard) and whoever hears it will randomly change their alignment towards you, for better or worse. It could make your mission a cakewalk, it could make you instantly fail it. It’s a mess, and I love it. 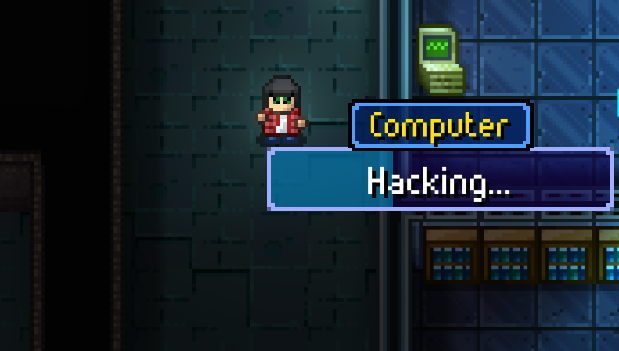 Hacking minigames can be pretty annoying, but this is the alternative

The game also incentivizes (though doesn't strictly require) actually playing differently for each class. In addition to the floor-by-floor missions, each character has an optional "Big Quest" for bonus XP. Thieves are supposed to steal, so their Big Quest is to loot a certain number of chests and/or safes. Doctors aren't supposed to harm, so theirs is to keep their kill count under a certain number. Blue Gangsters hate Red Gangsters, so their Big Quest is to kill them all. Each class also has unique XP rewards, so the same action (killing a cop, let's say) will be weighed differently for a soldier (+10) than for a cop (-43.) This gamified roleplaying helps keep each run distinct and reinforces the personality of each role.

Otherwise, the back-of-the-box feature list is more or less what you'd expect from a game like this. There's a persistent progression system where you unlock more items and character traits for the reward pool, unlockable characters, custom characters, and daily runs. That's all fine, but personally, I'm most excited by multiplayer. I haven't yet played any, but the potential for shenanigans is huge.

I don't really know what else to say about this game. I don't want to oversell it. It just kind of bums me out that it hasn't had a lot of mainstream attention. It doesn't have an obvious gimmick like Necrodancer or an in-your-face aesthetic like Darkest Dungeon. It's not as slick and polished as Dead Cells or as artistically personal as Isaac. And yet, it's as unique and interesting as anything I've found on those "Roguelikes you should play" lists. It's messy and silly and a bit shallow sometimes, but it's also a great slapstick playground full of hilarious surprises. It deserves better than obscurity.