My Thoughts on Vigor's Switch Beta 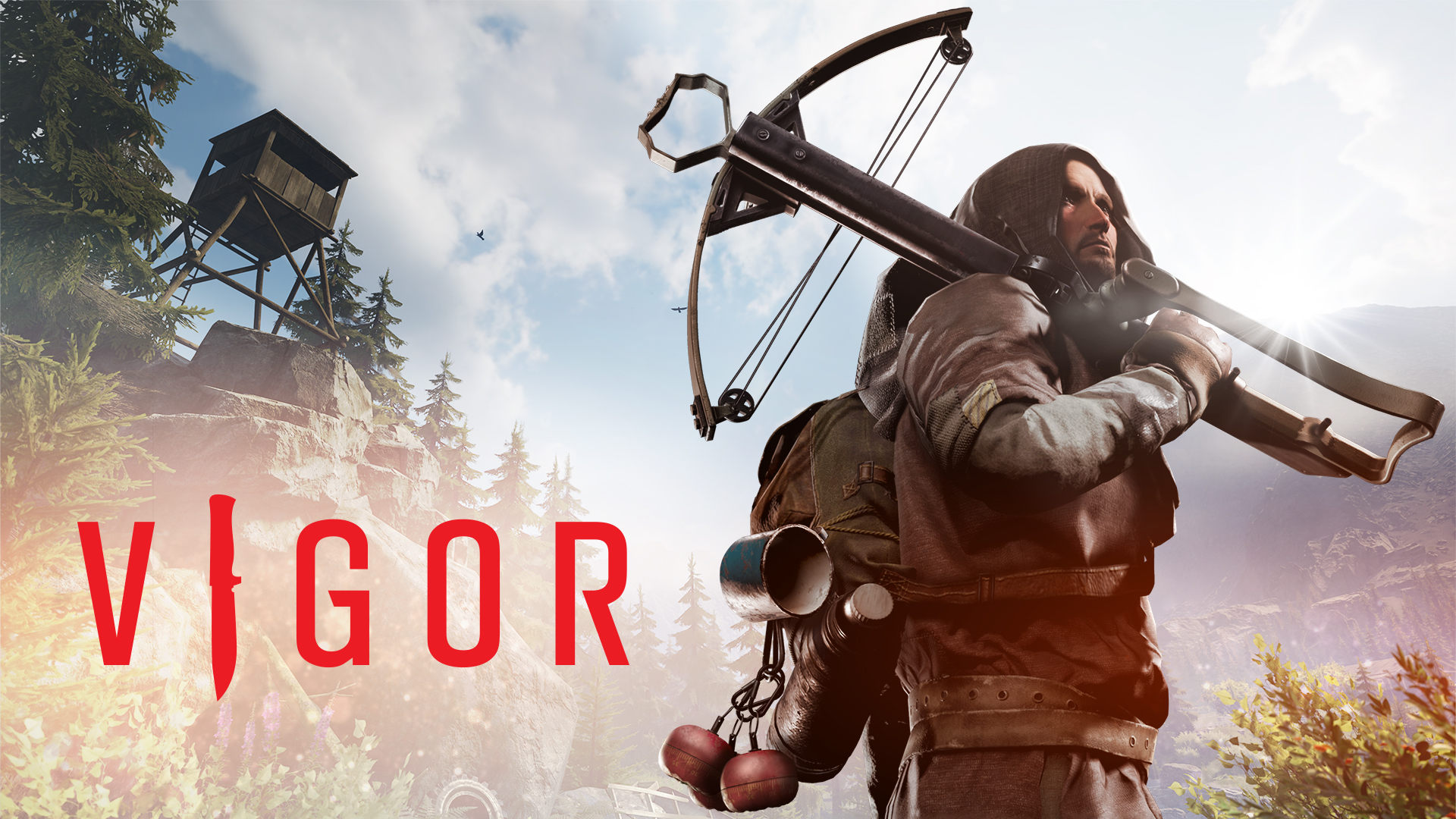 I have a love-hate relationship with Escape From Tarkov. On one hand, I really enjoy the premise of the game; but on the other hand, I do not like the realism of the game. There are many other things I could talk about with that game, but the main thing I want to say is I wish the premise of Escape From Tarkov could be implemented into a different game. Fortunately, I found the game I’ve been looking for, but I found it in the wrong place. With that said, here are my thoughts on the beta for Vigor on Switch.

Vigor is a free-to-play third-person multiplayer shooter that originally released on Xbox One in 2019. 8-12 players enter an area and loot resources and weapons. Each map is filled with locations to loot as well as a few event areas like an airdrop landing zone and a house with a safe in it, and these areas have the best loot. There are also exits found around the edges of the map where players can leave at any time. After some time has passed, radiation fills the map, slowly killing anyone left. If you live, you keep whatever you picked up in the match; but if you die, you lose whatever you picked up as well as whatever you brought into the match. In between matches, you spend time in a house you are slowly renovating with the resources picked up in the game.

I don’t exactly know what to call this style of multiplayer, but I enjoy it a lot, and I think it is well executed here. The combat and feel of the game reminds me of PlayerUnknown’s Battlegrounds, which isn’t for casual play but isn’t close to how hardcore Escape From Tarkov’s combat is. Resources are simplified to a few core items like glass or nails, while ammo is classified by caliber like 7.62 or 9mm. Instead of weapon attachments, there are variants of the same weapon with different attachments. This game has a good balance of simple and hardcore, but the various features in and around the game is what makes this experience unique.

A lot of the neat features in this game can be found in other games, but the fact that they are all housed in the same place is what makes this game feel different. Before a match starts, everyone in the match can spend money on supplies, which will spawn more and better loot in the match. Players can also buy insurance, which will keep any loot picked up as well as any loot brought into the game if they die. Inside of the game, there are special events that change location every match. There is a barred house with a safe full of good loot that takes a while to open, a radar station that temporarily shows the location of all players on the map, an airdrop that spawns towards the end of a match that drops good loot, and a comms station that changes the location of the airdrop. These zones will announce when they are being used or collected by someone, and being the person trying to collect loot while anticipating a fight is a lot of fun. Speaking of loot, there are photographs that can be picked up that show an “x marks the spot” location, but they are too vague to be of any use. I think it’s a neat idea, but it should be improved. Finally, while in combat, you can change to a first-person view while aiming down sights, which helped me quite a bit with certain guns. The various features of the game are neat, but what really gives this game and its loot meaning is what happens outside of matches. 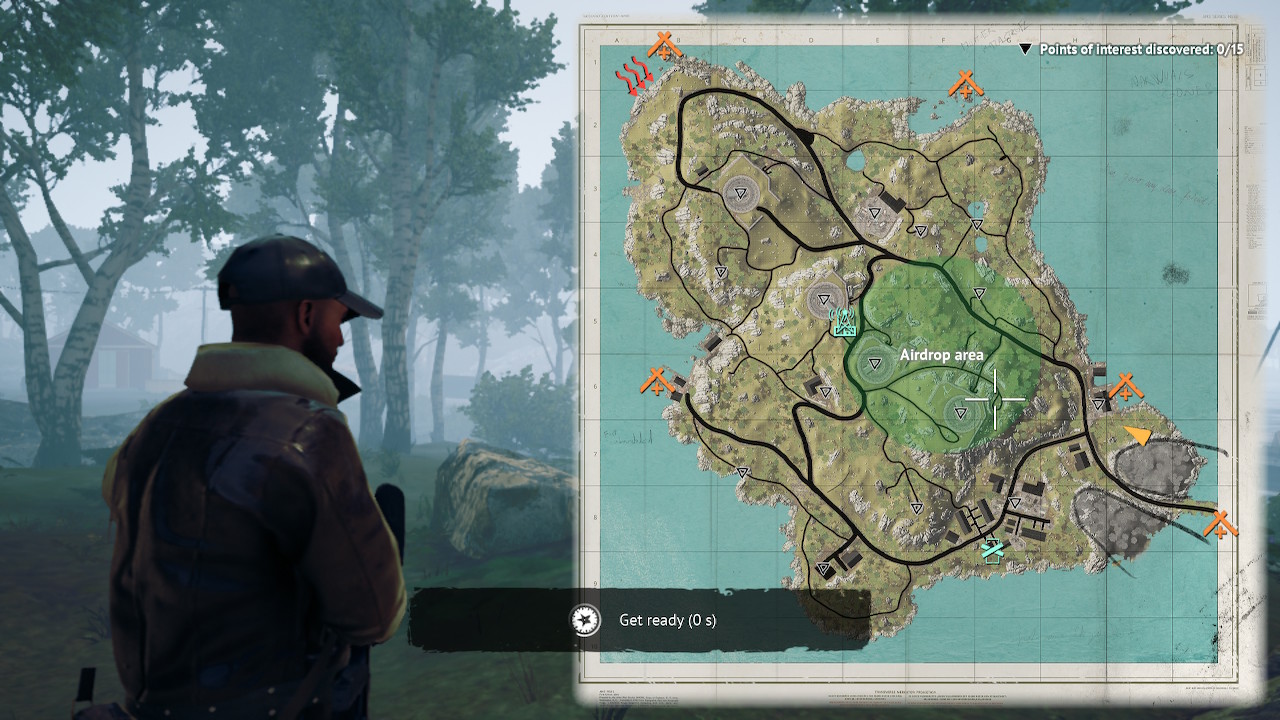 The giant green area on the map shows the general area where the airdrop will land.

In between matches, you spend time at a dilapidated house, slowly renovating it through the resources you pick up in the match. There is a giant upgrade tree for the house, and buying upgrades for your house will renovate it and even unlock some resource generators. I prefer the type of base building where you buy or earn base upgrades that are automatically placed in the area, and this game is right up my alley. The house isn’t the only thing you can explore in this area though. Outside of the house is a firing range with weapon challenges, a dock that leads to the lake, and even a charity box where the community pools resources together for a prize. I really like the house upgrades in this game, as for it gives meaning to looting and it makes a good grind I could get into.

So, is there anything wrong with this game? Other than not being able to revive partners in duos mode and footstep noises not always matching what you are walking on, no. Personally, I think this game is great, and I really love the formula of looting and building. The biggest issue I had with this game, though, is the platform. This game isn’t a Switch game. I’m not saying it shouldn’t be on Switch, but I think this should be the last platform it comes to. Bohemia Interactive—the developers of this game—make Arma games, and it shows. Remember how I said the combat feels like PUBG? I like that style of combat, but only on PC. On a controller, the combat feels really clunky. The controls also aren’t map well, as for I found some of the basic shooter controls like reloading or jumping to be flipped around with other controls. As for performance and graphics, it isn’t great. The game is pretty muddy in console mode, and super muddy in portable mode. Both forms ran okay, but one thing worth noting about the portable mode is that the controls feel significantly worse, as for the aiming is slowed down considerably. I know that the Switch can be a difficult system to port games to, but I find it hard to believe this type of game would go from Xbox to Switch instead of other platforms first. 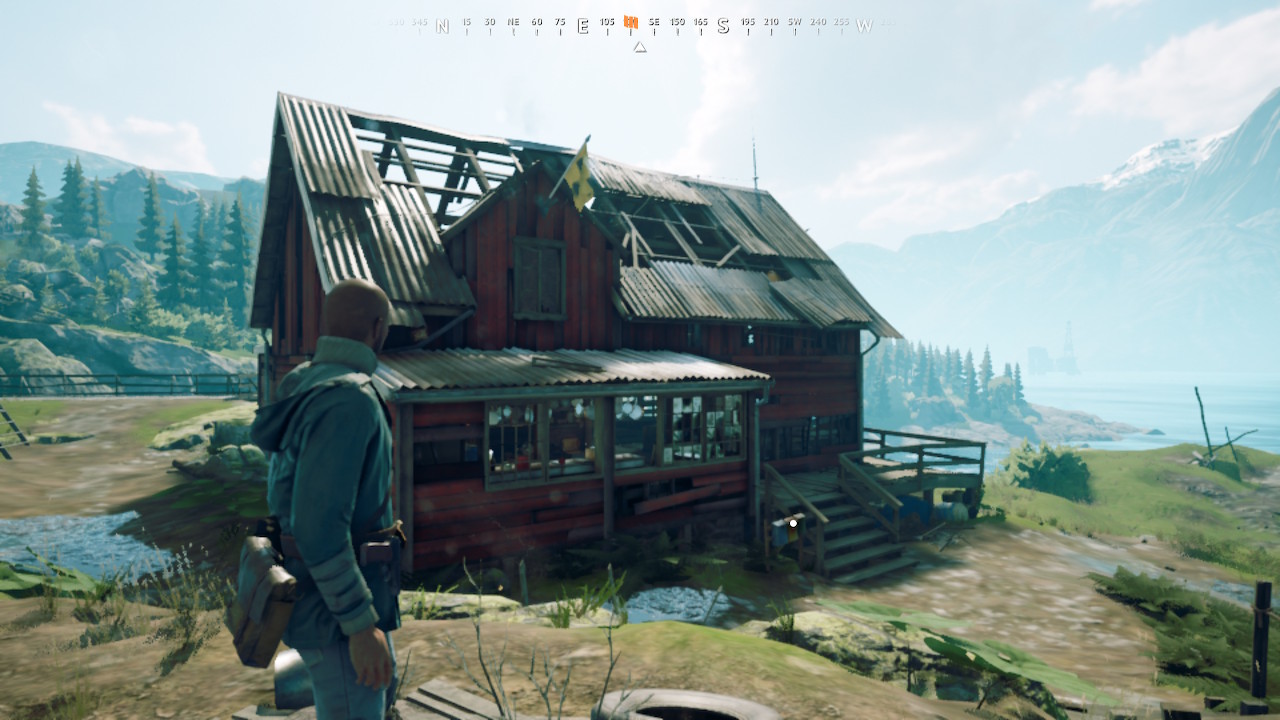 This game has beautiful scenery, but it’s hard to enjoy with how muddy the graphics are.

In conclusion, Vigor is the right game on the wrong platform. I love just about everything this game has to offer, but I do not love playing it on a Switch. I would only really play the Switch version if I was stuck in a hotel room and could transfer save files to other platforms, but I don’t see myself getting into this game on this platform. This game is definitely worth keeping note of until it hopefully releases on other platforms.