Sigh... It is quite hard to believe how hard this franchise has fallen. It started off good, then jumped to portable where it fell hard. It took them 10 years to finally release a proper console sequel that felt not only rushed, but somehow also cobbled together in a rush. It was like they took every possible wrong turn along the way and then wondered what happened. The further delayed release on the PC and the release of Valkyria Revolution meant that they could not take advantage of the PC or HD release that brought renewed interest either.

Valkyria Chronicles 4 follows Squad E of the Federation led by Claude Wallace and his friends as they attempt to make one final gambit north to capture the Imperial Capital Schwartzgrad with Operation Northern Cross. But as the early winter begins, plans quickly go wrong and they are forced to use prototype boats to cross the sea and invade the capital with their backup plan, Operation Cygnus. The boats turn out to be powered by children with the Valkyria potential who will self destruct upon reaching their destination or should the boat fall in order to trigger the equivalent of a nuclear explosion. The only one who makes it is the Centurion, the ship that Squad E is on. This causes everyone to hesitate, but luckily, a ceasefire is called during the final moments just before they were about to activate the bomb.

Each of the main characters do have a bit of time to shine, but the focus is on Claude, Kai, Raz, and Riley. Everyone else is pretty much there to just fill the spaces and end up fading into the background (especially Minerva). One of the problems with the story is telling the events out of order, which is rarely ever a good thing. We do not understand how everyone got together until a few missions in and one more for what happened to the Kai we see in some scenes. There are some missions that are unlocked by using some characters enough to develop them, but even then, they do not help address the problem of sidelined characters. The inclusion of the DLC content being unlocked out of place does not help either and just messes up things even more. On top of that, the "True Ending" adds random scenes here and there and should have been the original ending and not have bothered with the hard mode final battle for like twenty extra seconds of footage.

The graphics are not much of an improvement over the Valkyria Chronicles 1 days. It is a step up from the portable PSP, but that is not saying much. The thing that stands out the most about the game is the style in the cutscenes, which is actually toned down in this version compared to the previous games due to the lack of pre-rendered cutscenes. Most of the cutscenes in this game are done through smaller animated portraits, making it feel as if a lot of the game was hastily put together at the last minute. But, the few pre-rendered scenes that they do have are all great. It is just a shame that some of them were clearly cut short.

The game has a rather unique take on the turn based system. It utilizes a command point system where you can take a number of turns based on the command points that you have. Repeated actions by a single character lowers how far they can move (there are skills to counter this on some characters, allowing them to run across the entire map by chance) and limited ammo for some weapons makes it harder for them to fire repeatedly. You are also able to deploy two tanks in addition to eight infantry units on most maps, with an additional two or three units you can deploy in battle through camps as well, bringing the number of total units to twelve on some maps. A few prevent reinforcements from being deployed. 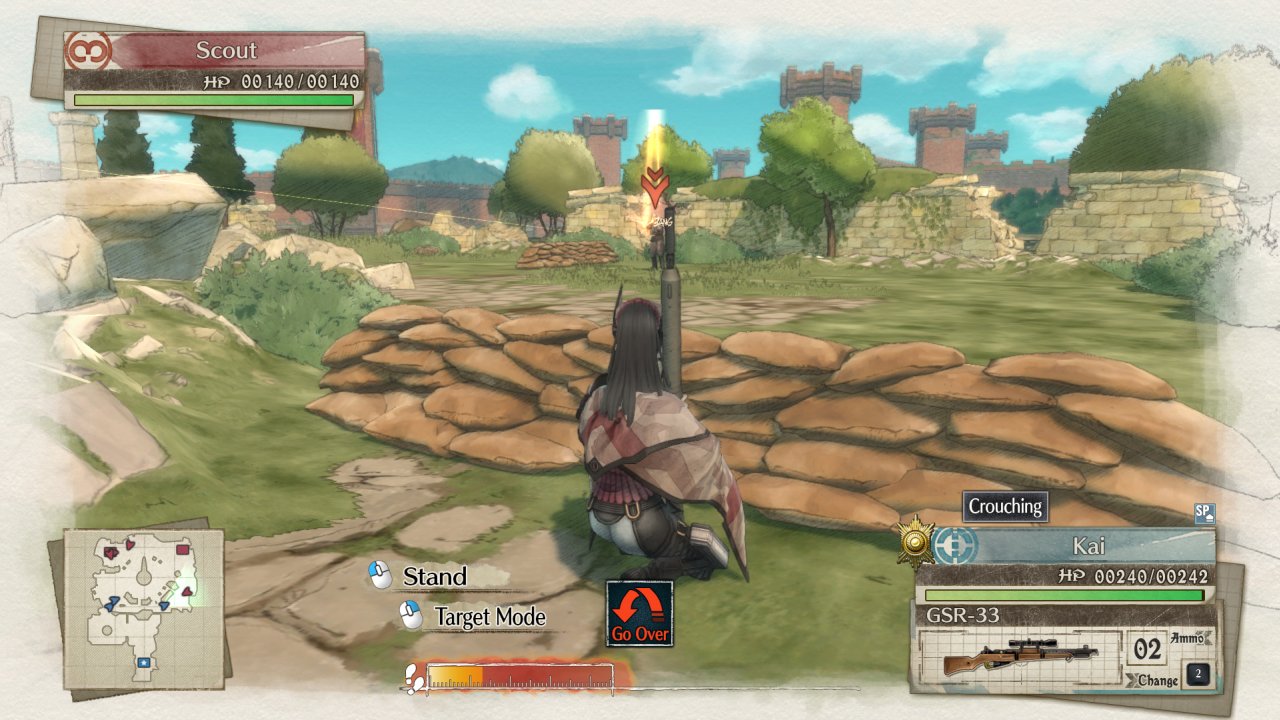 The command points can also be used to give Orders, which boost certain abilities. They vary wildly, but the most useful are the ones that boost your defenses to run through enemy lines. The anti-tank ones are also very useful due to how bad Lancers are in this game. Their power is good, but their terrible movement and the openness of many maps prevents you from taking advantage of it. Because of this, a single Shocktrooper with Demolition boost can do significantly better when using the same amount of command points due to the difference in movement. If it were not for the stages that mandate a Lancer, there would be no need to use one at all. Anti-tank sniper rifles and Grenadiers are luckily able to replace them late game.

When a character is selected, it goes into a third person view where you can control them, take aim and fire. The result is a hybrid turn based and action style game that I have not seen in other RPGs outside of Valkyria Chronicles. It is something that you will either love or hate. The problem is that the rules for turns differ between your characters and enemy characters. This is most noticeable in the Grenadier class. When your Grenadier class is setting up, they will still be shot at. When enemy Grenadiers are setting up, they will not be shot at. The same applies to how long it takes enemies to stop shooting. Your guys will not shoot the enemies as long as the enemies are not moving. Because of their warm up time, they will also be terribly inaccurate, meaning that they will miss unless the enemy is climbing over sandbags or are forced to stop to make turns because you put a tank in their way. The most noticeable version of this is if you unlock Crymaria in the post game where she cannot seem to hit anything due to her incredibly long wind up time, but the enemy Crymaria will eat away half your health even as you are aiming in front of her face and should be out of her range. This problem is further exasperated by poor hitboxes, especially with the Lancers when it becomes necessary to use them at the end of the game. Meanwhile, increasing the blast radius of Grenadiers do make up for their bad accuracy. 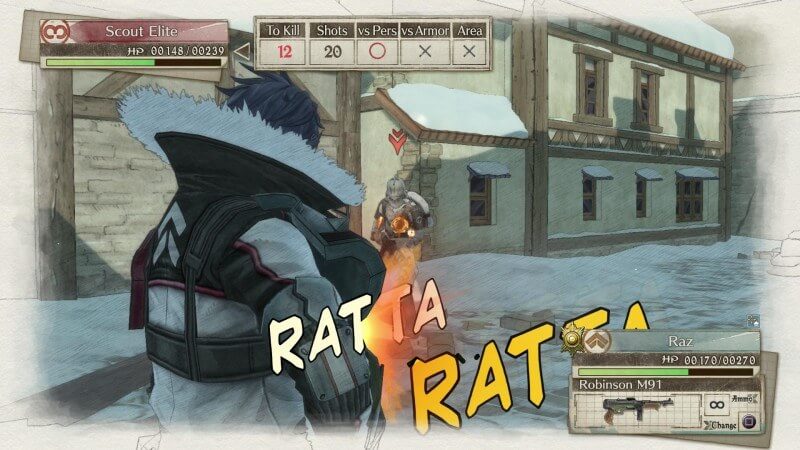 It is a shame that there is not as great of a diversity in weapons to make each class more interesting. Scouts get grenade launchers that allow them to use it at a greater range. Shocktroopers get flamethrowers that can ignore the defenses provide by barricades. The Engineers are able to carry three grenades instead of one as well as disarm mines, repair vehicles and barriers, and reload ammo. But, that is about it. Lancers and Grenadiers can switch between anti-armor and anti-infantry focuses outside of battle and there is a rare sniper rifle that can do the same for snipers. But for the rest, it is just clip size, range, and accuracy that varies slightly. Some things can be adjusted with the accessories you can earn from the game to equip one to each character, but their differences are small, such as an extra five damage here or an extra ten percent health there. But, the bonus AP that grants greater movement seems to be invaluable.

Most missions have a gimmick of some kind that only applies to that one specific mission. They vary wildly from avalanches to parachute bombs that you have to snipe out of the sky. While this might seem interesting at first. One of the issues is that few of them ever repeat, so they are not quite new mechanics. Heck, even the Centurion's special Ship Orders that you unlock halfway through the game feel pointless as the only one with any use is probably Bombardment that you might use once or twice to take out annoying Grenadiers and Snipers you can't seem to pick off.  Instead, it just tries to force you to diversify your build rather than try to adjust the classes so that some of them are not as bad (I'm looking at you Lancers). The core concepts of these missions are not bad, but in execution, they just have too many of them that are there for the sake of being different. It would be different if more of them had utility instead of just being one time things. Even hiding in grass as cover disappears as you get weird barriers that are meant to provide cover against Grenadiers instead. The focus on these gimmicks end up hurting the game as squads are pretty much predetermined as they try to funnel you into a specific strategy. This is especially true of the final battle, which is the worst combination of several of these gimmicks stacked together as it requires you to use Lancers and Engineers together while making anti-tank weaponry and actual tanks usueless for most of the same said fight.

There is also the problem of not knowing what enemy types are. Normally, it is easy to tell that this is an armored unit, so anti-tank orders and weapons work. But in the case of bosses, they do not seem to count. A giant armored tank is not considered a tank and the anti-armor seems to do nothing. Penetration, which ignores defenses, also does nothing. It would help if it was more clear what counted as what type. And because of this, most orders become entirely useless.

Somehow, this game feels like they took all the rejected maps of the previous games and dumped them together. The ability to switch classes is gone from this game. Valkyrian transformations are gone. The new Grenadier class is a complete miss though due to how enemies work and Lancers were ruined because anti-armor Grenadiers do their job better. The only positive thing when it comes to the classes was bringing them back under their respective trees instead of having a bunch of pointless ones. Much of the game is based around gimmicks that do not repeat. Combat is a bit wonky due to most bosses being "unclassified" enemy types and hit boxes on Lancers are super weird. The accessories are nice for customizing some status attributes, but not much else. The soul of the Valkyria franchise is here, but its heart feels like a cheap imitation.