Jeff: My Favorite Horror Stealth Level in a Video Game 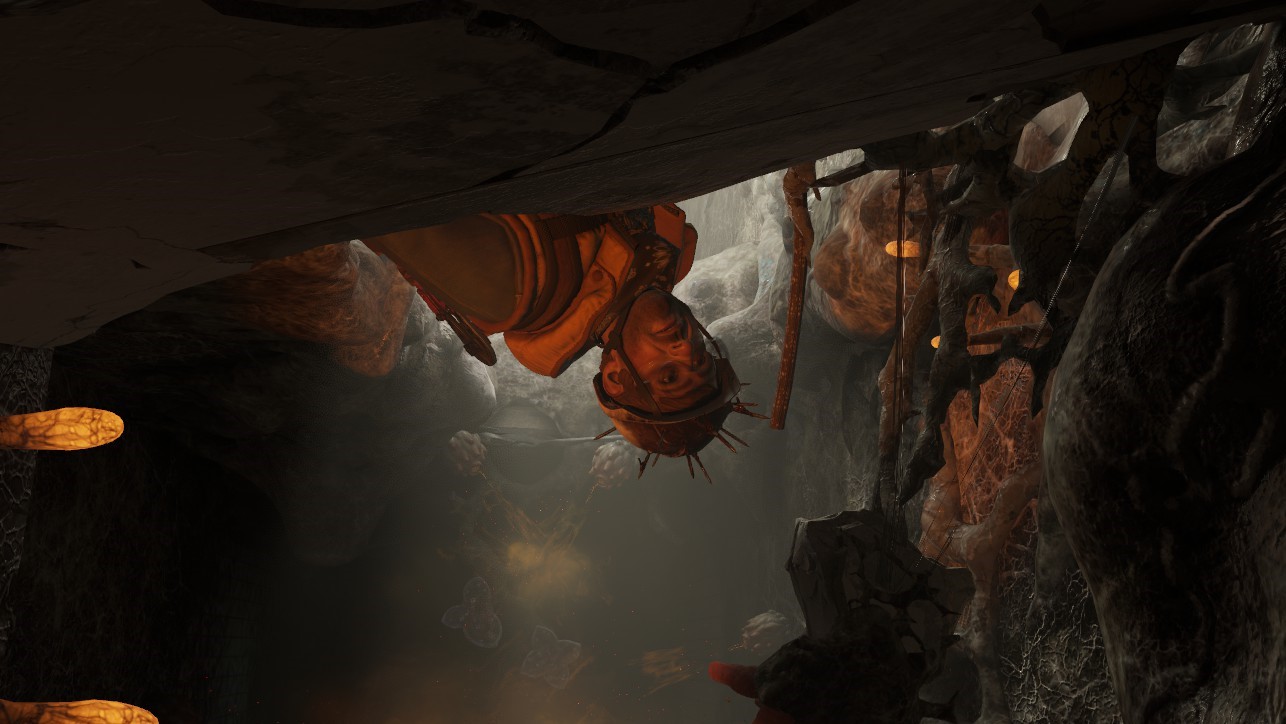 Note: This blog does not contain story spoilers, but does go through the entire level in question.

Half-Life: Alyx does a lot right. Combat is a blast, the puzzles are a lot of fun, and the story is memorable. In the midst of all of that, though, is a level unlike the rest. In most non-stealth games, the stealth level usually varies from bad to forgettable. In Alyx, however, I found this particular stealth level to not only be my favorite level in the game, but one of my top favorite levels in general as well as something worth writing about. So, without further ado, let’s get into the level simply titled “Jeff.”

Jeff is the title of chapter seven in this eleven chapter game. It starts with Alyx strolling through some empty buildings until she comes across the first major element of this chapter: orange spores. These spores make her cough when she walks through them, but nothing else as far as I could tell. After some more walking, she comes across a man struggling with a barnacle. She shoots the barnacle and frees the guy, but something roars right after she shoots. The guy briefly explains the roar came from “Jeff,” who is blind but can hear really well. He runs off screen, but is met a minute later when they both meet at a giant hole in the ground. The hole leads to the floor below, where Jeff is roaming. The guy shows Alyx how Jeff reacts to any noise he hears by throwing a bottle near him, which makes Jeff go to the source of the noise. Despite his predictability, the guy says he is extremely dangerous, and that Alyx should be cautious. After some more walking, Alyx finds a safe way down to the area where Jeff is roaming. Before going, she is stopped by the guy one last time, who tells her she should cover her mouth when she is near the orange spores. Then, before leaving, he says his name is Larry. You jump down into area, do a little more walking, and slide open a door to find Jeff standing only a couple of yards away. This is, in my opinion, where the level truly begins.

When I started this level, I didn’t think much of it. An enemy who is only sensitive to noise isn’t exactly a new thing, and Jeff is no different. Still, I thought at least throwing around bottles to distract him in VR was neat. The first part of this level plays out just like I thought: I try to progress through the level while throwing bottles in the opposite direction to keep Jeff busy. There are three things I discovered in this first part, though. First is that Jeff spews orange spores, second is that I have to actually put the controller to my mouth to stop Alyx from coughing instead of it automatically happening, and third is that any resin (material used for upgrading weapons) in this in this area as well as in the rest of the chapter are placed in such a way to easily break bottles. Some neat little things, but the level is playing out how I predicted. I get to a point where I need to turn a wheel to open a door, but the wheel is loud and slow, which meant I can’t keep Jeff distracted long enough to fully open the door. I eventually figured out that he can be locked in a walk-in fridge, which is what I did. I locked him in, spun the wheel, and went on my merry way. There is an elevator behind the door, so I started walking towards it, thinking about Jeff’s wasted potential. 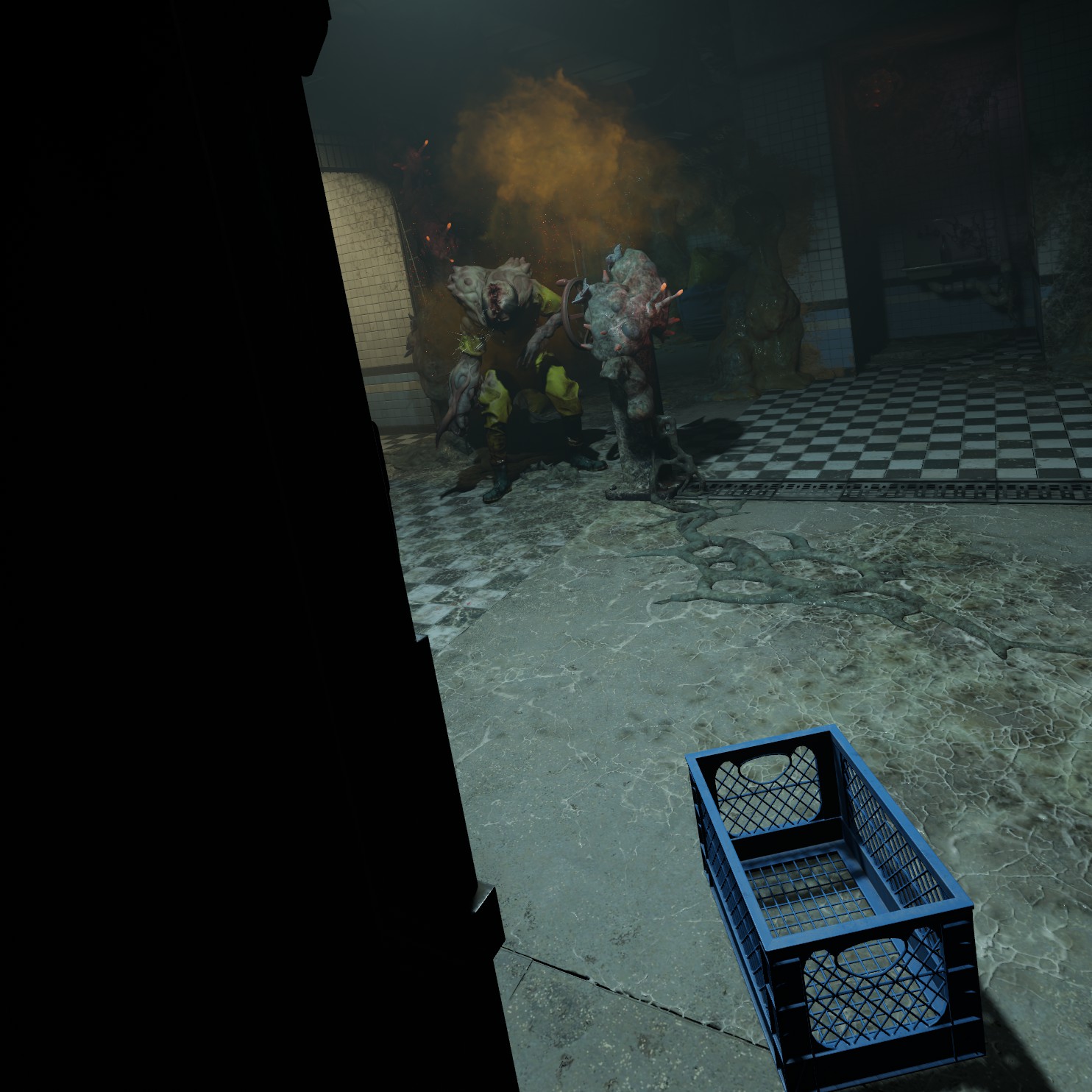 Jeff with some orange spores and the wheel.

About halfway to the elevator and Jeff about 99% out of memory, the lights turn off. No lights means no power, which means no elevator. I entered a room to the right just before the elevator, and found a power box. To turn on the power in this game, you have to essentially connect power lines, which can only be seen with a multi-tool. I followed the line, but it dead-ends in the one place I didn’t want it to: the walk-in fridge. At this point, I started thinking about movie scenes where the hero locks a bad guy in a room and sighs in relief, only to find they have to go into the said room for a key item. I went back to the fridge and opened the door, letting him back out. The door was busted by this point, which meant not being able to lock him back in. Me being that close to the door made me cough in the game, which activated him. I quickly took a bottle, threw it somewhere, and stood in a corner with wide eyes and a hand over my mouth. The hand over my mouth was virtual, but the wide eyes were mine, scared that I was done for. Just when I was done thinking about movie scenes with the fridge, I started thinking about them again, this time with the protagonist doing exactly what I was doing while the blind monster inches closer and closer.

I eventually get Jeff to leave, which allowed me to get to work. I turned on the power and opened up the elevator. The elevator made a lot of noise, but I had a feeling the game was trying to make a “run to the elevator and escape just in time” moment. So, I started running (more like teleport-walking, but that’s besides the point). I reached the elevator, pressed the button, and said goodbye to Jeff. I thought to myself releasing the monster you caged was neat, but that’s all the developers could get out of him. Then Jeff entered the elevator. 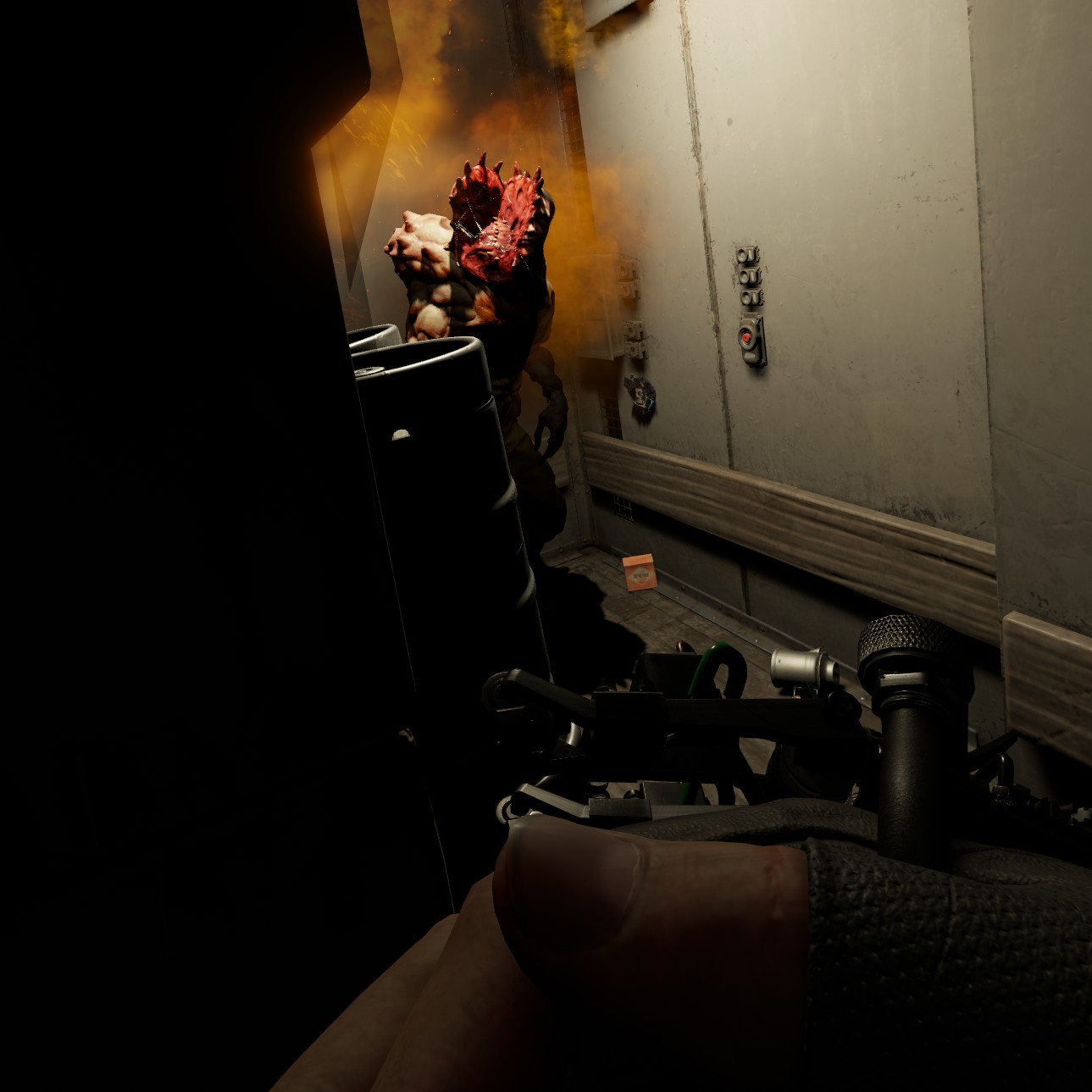 No pop-up scares can compare to the horror I felt when Jeff suddenly entered the elevator.

The best horror moments aren’t always pop-up scares and screaming. Wanting to yell “oh no!” but not being able to can be just as scary. I can’t think of any games that have made me feel this way until I was stuck in an elevator with Jeff. There was a giant box in the elevator, so I hid in a corner behind the box while I watched Jeff smash a headcrab against the wall. Once we reached the top, we entered a room filled with more bottles. I threw a bottle, distracted him, and ran to the exit. When I got to the exit, I found myself on a walkway looking over this giant industrial mining-looking thing at the bottom, and a giant hole in the wall. Beyond the hole was a breathtaking view of the city at sunset, with atmospheric music to match. I stood there for a second, looking at the view and forgetting about Jeff, then started moving again. The second I moved, though, something near me broke, and Jeff started chasing. I ended up in a room with a headcrab knocking bottles to the ground, so I knew I had to do something fast. I found a way through the generators blocking my path, and eventually found a safe place away from Jeff. I followed the path and ended up on an another walkway across from the first, with three stands in front me asking for three power cores.

By this point, I wasn’t too scared of Jeff. It was still scary accidentally coughing or knocking over a bottle, but I started to notice his patterns. So, when the time came to go to a room where the power cores (and probably Jeff) were located, I didn’t fret. I dropped down to the floor where Jeff was, and started trying to find the power cores. Unfortunately, two of the three cores involved making noise, which threw my comfortability right out a window. One was hidden in a tool box, which was no sweat, but one was hidden behind a barnacle tongue and the other was behind a giant squeaky store gate. On top of all that, the room had tight corridors and a few areas filled with orange spores. Still, I got to work, grabbing power cores and throwing them to a safe place. For the ones that forced noise, I would throw a bottle, get the power core, and run to a corner until he wandered off. That and a death or two later, and I got all of the power cores safely out. I got back to safety, plugged them in, and checked out whatever these power cores were powering.

As it turns out, the power cores were powering the giant industrial mine-looking thing the room, which was actually a giant hole cover. I got to the ground floor where there was a control panel meant to open the lid. At this point, the atmospheric music playing when I first visited this giant room started playing again, which made me think I was finally done with Jeff. I started working the control panel when Jeff suddenly appeared, attracted to the noises the control panel was making. I eventually found a way to lock him into a trash compactor, got back to the control panel, opened the lid, and went down the hole. And that wraps up the level simply known as Jeff. 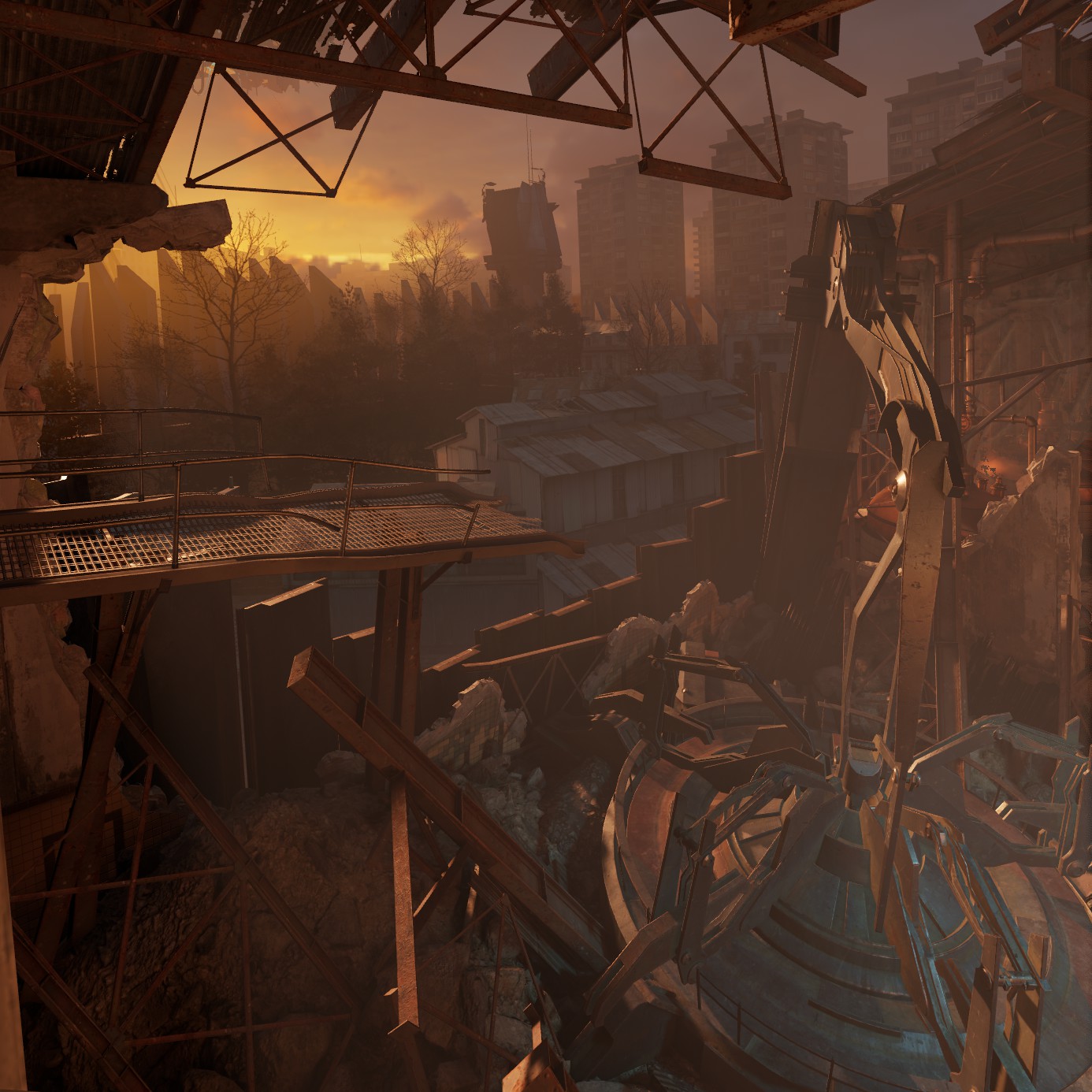 What a beautiful view. Too bad some spore-spewing freak is chasing me.

Mechanically speaking, I don’t think there is anything revolutionary about Jeff. He is blind, but is attracted to noise, which isn’t new. Outside of small things like coughing or purposefully-trapped pickups, I can’t think of any new stealth mechanics in this game. What makes this level so incredible, though, is the way the developers drag it on. Just when you think it’s over and Jeff is nothing more than a cheap stealth level, the game forces you to re-introduce him into the game. The game forces you to re-open the door to his prison cell. The game forces you to be in a cramped elevator with him while he beats up a headcrab. The game forces noise making throughout the level to keep him on your tail. The game even throws pretty music and scenery in there to make any threatening feeling go away, only for Jeff to suddenly reappear. Virtual reality made these moments even better. Standing in a corner with my controller over my mouth or peering around a corner to see Jeff, or even being clumsy with how I throw bottles made these movie-like moments I don’t really get in traditional horror games.

In any other game, this chapter would range from boring to frustrating. Spending an entire chapter of a non-stealth game in stealth with the same enemy sounds awful in any other game, but Valve managed to make something spectacular. It’s the combination of virtual reality and Valve’s craftsmanship that makes this level so tense, so scary, and so memorable. Jeff may be a silly name for a chapter, but it is one I won’t forget.