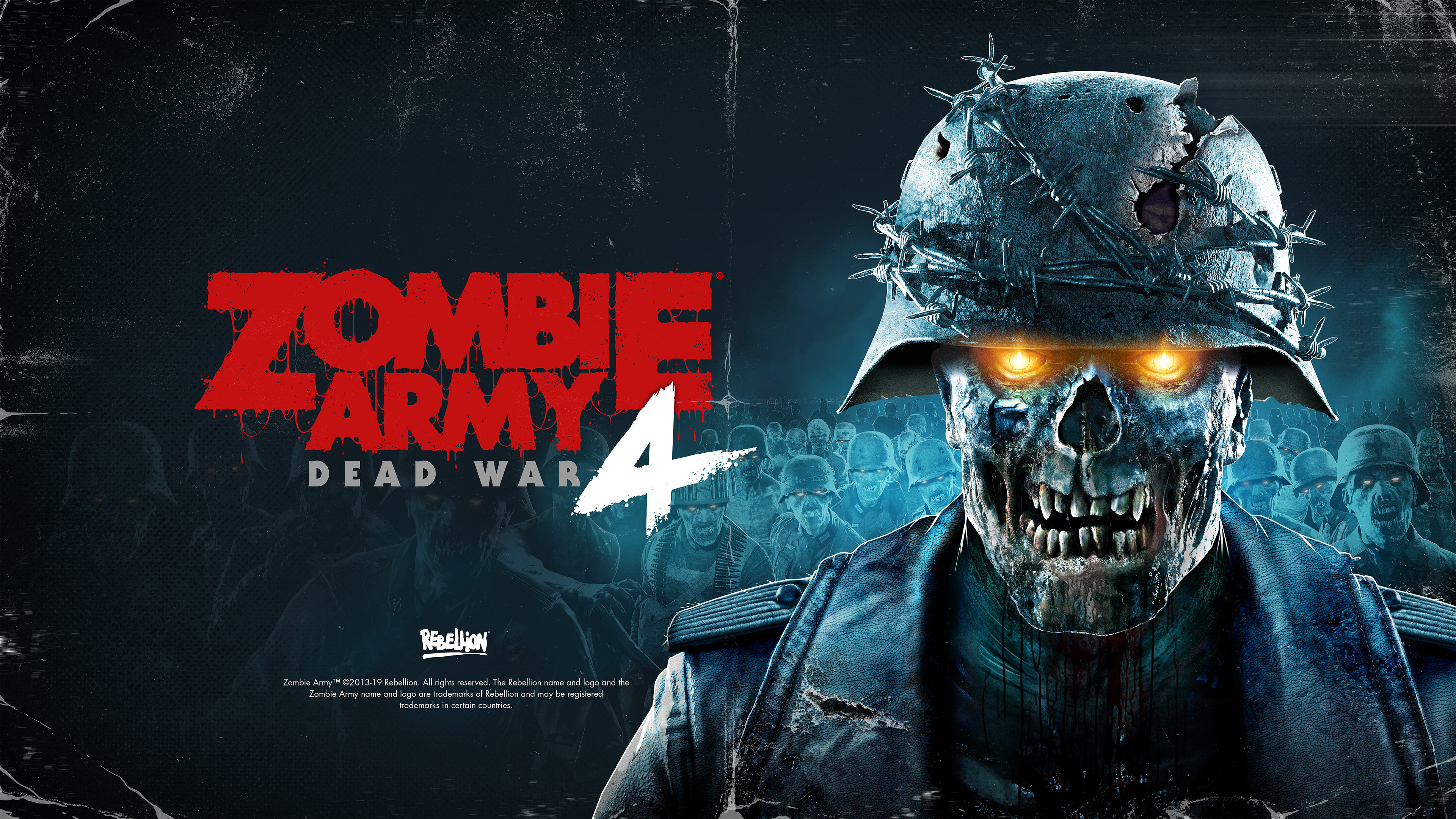 There are a couple of specific genres that can be seen throughout many releases over the past decade. There are many indie games that uses the metroidvania formula, and there are triple-a games that are trying to make open-world, 60 hour experiences. One of these recurring formulas is the Left 4 Dead formula, which I would describe as a linear level with a few horde survival parts put in between while a group of four fights off waves of normal and special enemies using a variety of weapons and consumables. Warhammer: Vermintide is this, World War Z is this, and Zombie Army 4 is this. While it may be familiar, what it has to offer around the edges is what makes or breaks this game.

Taking place shortly after the events of the trilogy, Zombie Army 4 follows four resistance members in 1946 as they continue to fight the undead army that plagues Europe. While travelling from country-to-country in an effort to stop the horde, scientist Efram Schweiger, a central figure in trying to stop the apocalypse, suddenly disappeared. With the zombies on the rise and the one man who knows how to stop it gone, it is up to the group to stop the horde for good.

The story of this game is nothing to write home about, but the fact that there is a connecting narrative between the levels is a step above any of the L4D-like games I have played. The closest thing I can think of is World War Z, but those were four mini-stories while this is one large story. I like the fact that there is a connecting narrative throughout the levels over being just a bunch of random levels because it makes the levels feel more connected and gives them more personality. On top of that, the game mixes its World War 2 setting with an 80s B movie style, complete with arcade sound effects and synth music. The setting and the style work pretty well together, and the two result in a not-too-serious tone that I enjoyed. For a game of this style, I enjoyed its connecting narrative and tone. 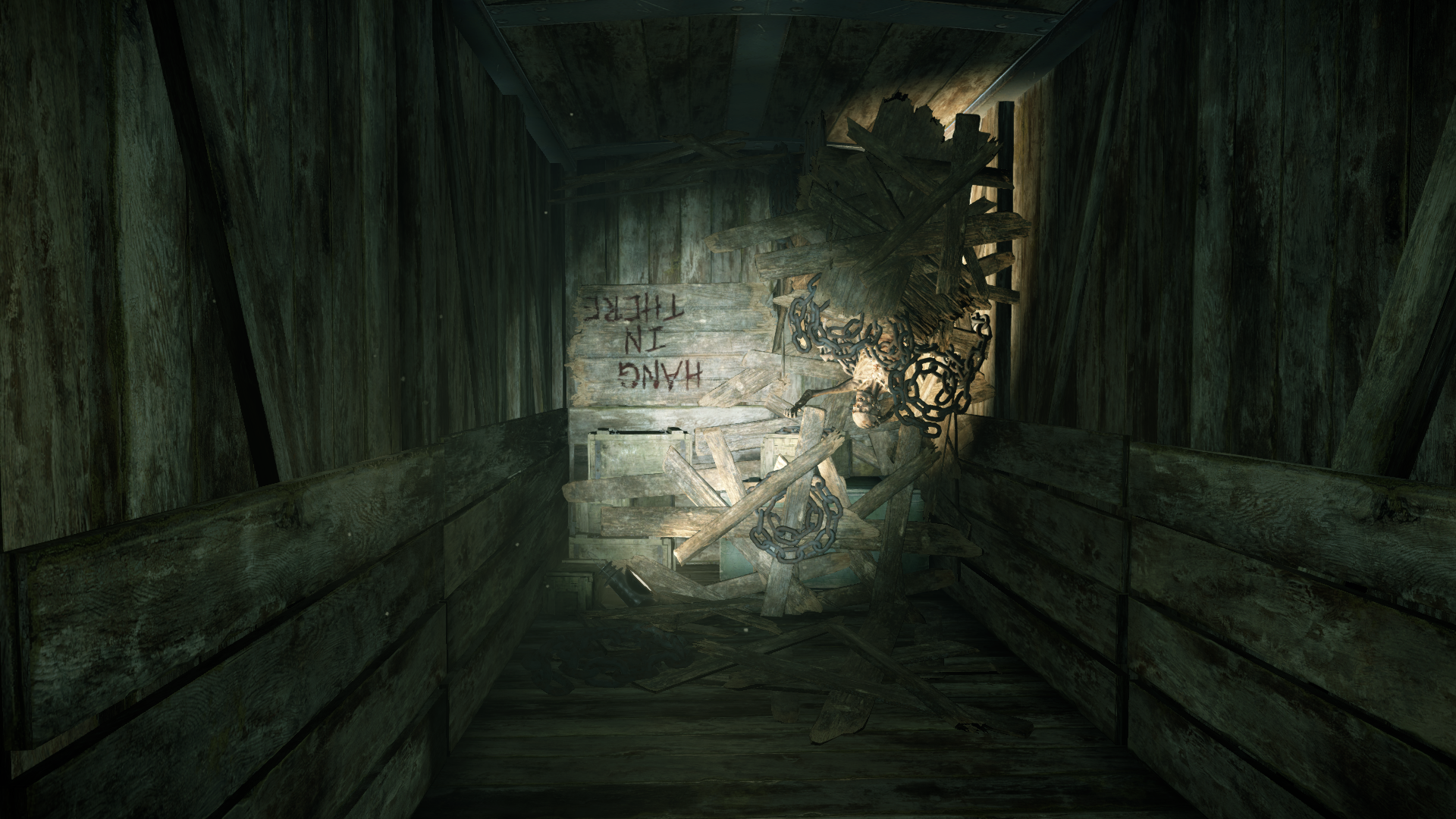 The humor in this game can be pretty funny at its best, and out of the way at its worst.

Earlier, I described this game as a L4D-like, and games that follow a formula tend to offer differences around the edges. So, what does this game have to offer? For starters, since it is a spin-off of the Sniper Elite series, the more hardcore sniping mechanics and x-ray kill cam are here. One thing I will say about this game in comparison to other Sniper Elite games though is that there seems to be a better balance between sniper gameplay and other gun gameplay. In Zombie Army 4, the other weapons feel more fleshed out and more fun to use while the sniper is a bit more basic, which I think works for a zombie game like this. The main distinction I would say this game has compared to other L4D-likes, though, can be found in the enemy variety and levels.

Enemy variety and levels are the two highlights of this game for me. When it comes to the enemies, I was surprised by the amount of variety as well as the distinctions between them and the basic enemy structures in other games similar to this. While a lot of the special zombies can be broken down into different categories like an enemy with a heavy weapon or a spawner, I still found the variety to be refreshing and impressive. Normal zombies, water zombies that spit toxic material, big zombies that use one of a few different heavy weapons, suicide bombers, zombies that spawn suicide bombers, zombie tanks, sniper zombies, and many more are fun to fight, and a lot of them didn’t rely on the basic enemy structures from Left 4 Dead such as hunters or smokers.

As for the levels, I found them to be varied and unique. There are nine levels in this game, which may not sound like much, but each level took me around one to one and a half hours to complete and are split up into chapters that almost feel like their own level. These levels have some fun locations like a zoo or Naples covered in lava, and there are a few cool moments I had in this game that I don’t really get in games similar to this one like surviving planes dropping suicide bombers or fighting the final boss. The story that ties all of these levels together allows the levels to feel more unique, and I enjoyed the variety and unique encounters I had with them. 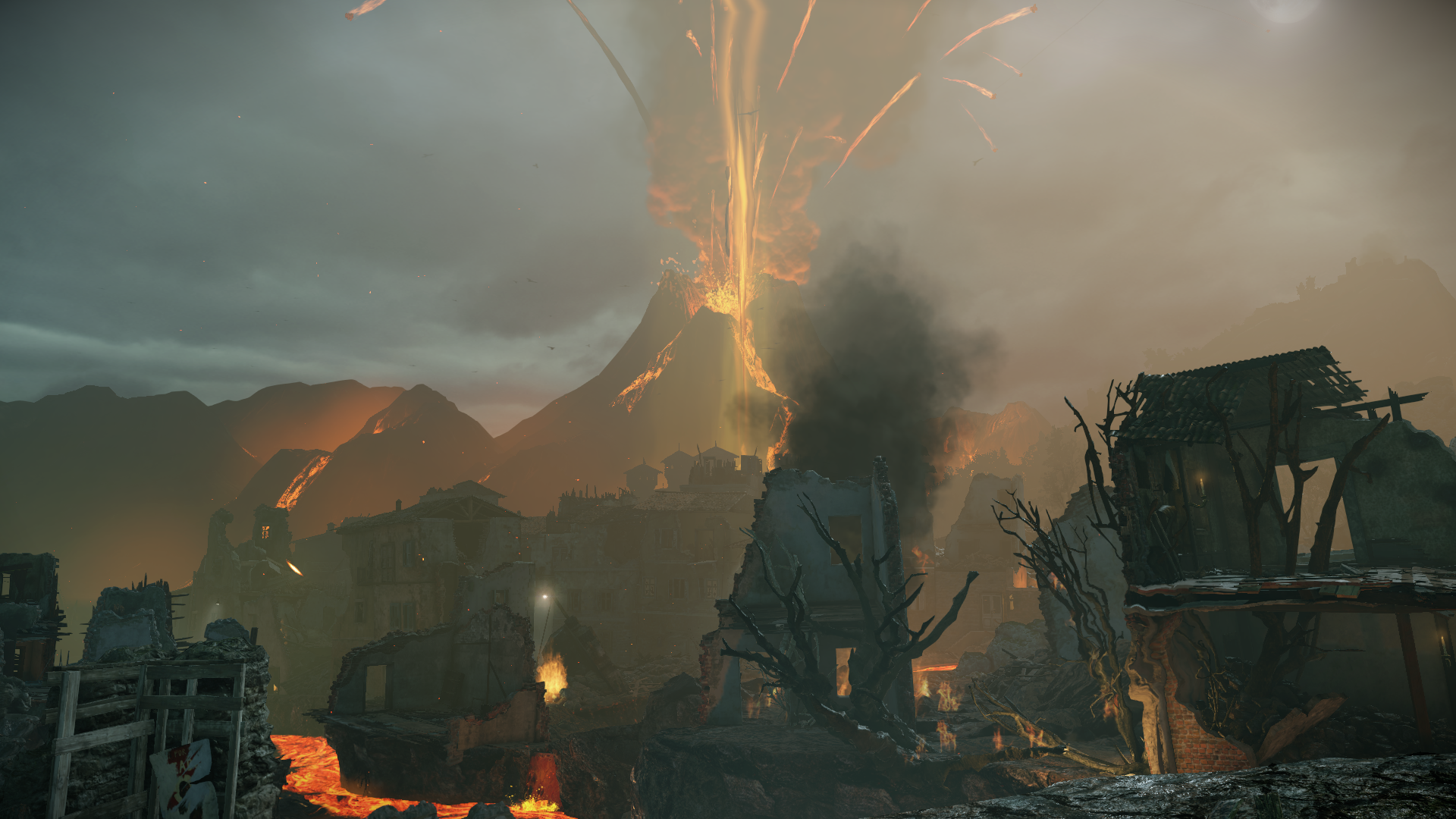 Sometimes, zombies aren’t the biggest threat to your health.

One of the biggest issues I have with Left 4 Dead is what to do once I beat all of the levels. I know there are some things to do like try to get high scores, get achievements, and so on, but in terms of in-game progression (something I am particularly fond of), I find that game to be lacking. Fortunately, Zombie Army 4 offers enough challenges and progression to keep me coming back. Every level has a set of collectibles to pick up like comic books, letters, and so on as well as a safe that offers a unique little challenge like saving humans or killing hidden rats. Every chapter of every level also has a challenge to complete and a high score to achieve, which rewards each chapter with either a bronze, silver, or gold medal. Outside of the levels, there are stickers to collect, which are obtained by doing challenges. Completing levels gives you xp, which unlocks various things to equip to your loadout. As for your loadout, you can customize and upgrade guns, perks, melee abilities, and more. Zombie Army 4 gives enough incentive to go back, which is something that other games can sometimes lack.

Those who have played either Sniper Elite or the first three Zombie Army games will have a good grasp of this game’s third-person combat. While it is very familiar, there are a few tricks up this game’s sleeve. Weapons can be upgraded, and these upgrades will apply elemental damage as well as other upgrades like better scopes. Each of the four characters have different buffs, though I found them to be passive and minor. Getting a 10 combo allows you to do a takedown on a zombie, which is a free knife kill to weaker enemies that will restore some health and ammo. There are four different melee attacks that have different effects. There are traps in every level like a re-animated shark or a fan that kills zombies. Each weapon type has a charge-up ability, like auto-aiming to zombie heads with a pistol. I could go on and on about the various different combat mechanics, but long-story-short, the combat in this game is more fleshed out compared to previous Zombie Army games and is a lot of fun. The biggest issue I have with the combat is the lack of weapons as well as a few weapons being locked behind a paywall. The weapons got stale fast for me, even with the upgrades, and I am disappointed to see the few extras added behind a paywall. Still, combat is a lot of fun in this game, and I like the improvements it has over the last three games.

Outside of the campaign is the horde mode and the weekly mode. The horde mode is a wave-based mode where you survive against the undead for 13 waves, and higher level items and new areas open up as time goes by. While this mode is pretty fun and I like the fact that it isn’t infinite waves, I found the experience to just be okay. There are only five maps (one was added shortly before this review), and no weapon upgrading or leveling. It’s a wave-based mode like many others, and I wish it had some more features. As for the other mode, the weekly event takes a level from the main game and adds modifiers to it, with a cosmetic item and some xp as a reward. It’s fun to play the levels with modifiers, but there is only one level per week, so there isn’t a lot of interaction with this mode. Overall, the side modes offer a few extra hours of killing zombies, but it’s nothing to write home about. 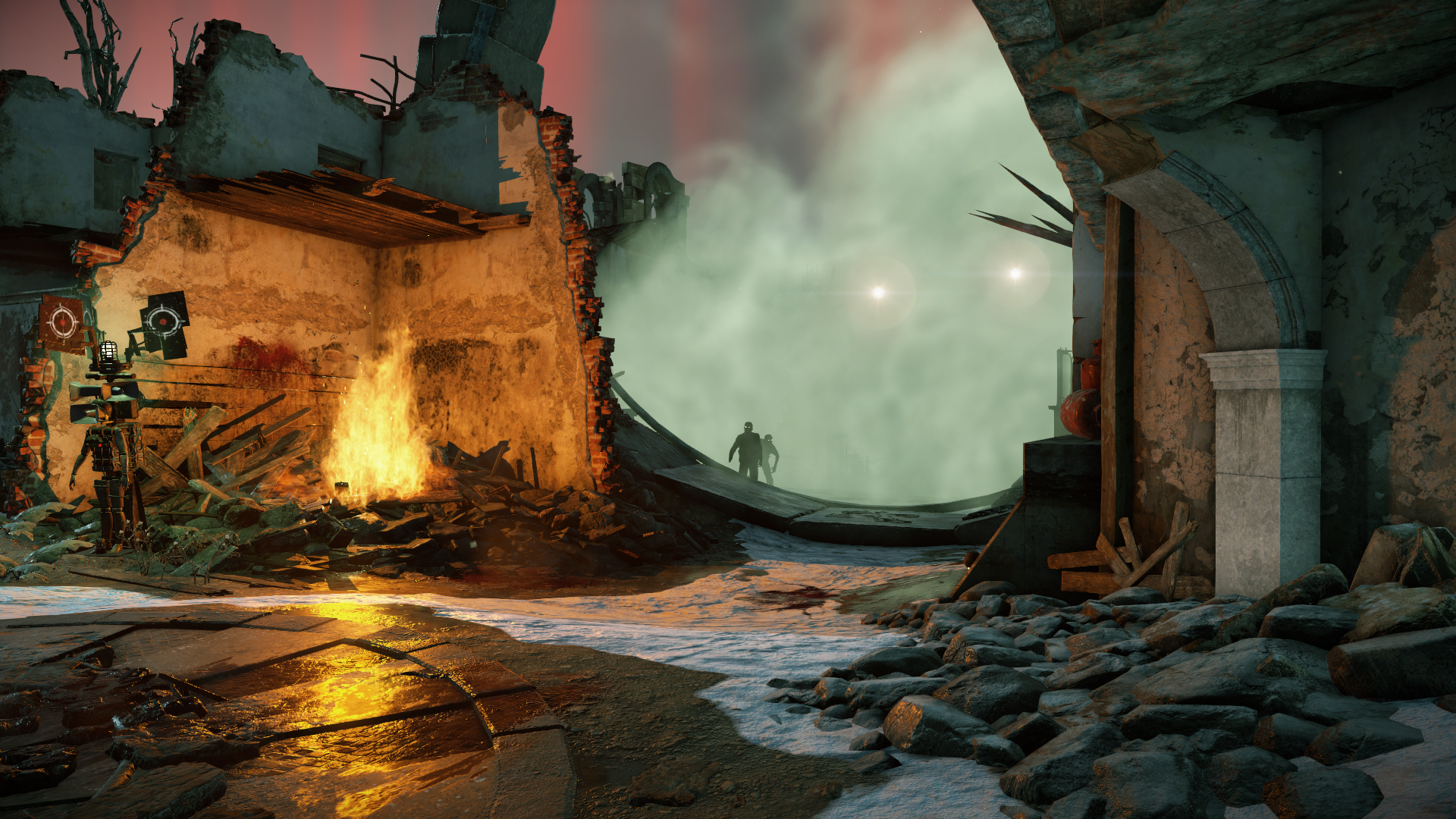 Horde maps are filled with fog, but completing waves will clear the fog up.

In conclusion, Zombie Army 4: Dead War is a fun one-of-those with meaningful improvements over the first three Zombie Army games. It has some good combat ideas as well as a lot of different zombie types and varied levels, but its biggest downside is that it is a familiar game in a sea of others like it. If you are a fan of the Sniper Elite/Zombie Army series or you are looking for a new Left 4 Dead-like to play with friends, then I would check this game out.