I may have mentioned this a few times before, but I’ve been playing Final Fantasy games since I was very young. My first RPG in general was Mystic Quest, I went from that to Final Fantasy Adventure on the Gameboy, Final Fantasy IV on the gameboy advance, and the trinity of VII, VIII, and IX on the Playstation and PC. Since I chose the Xbox during that console generation, it took me a while to play the tenth Final Fantasy, but it was going to be one of the first games I played once I finally did get a Playstation 2. I was familiar enough with Final Fantasy to know what I was going to get into. I knew it wouldn’t be anything like Final Fantasy Adventure or Mystic Quest because the one wasn’t actually Final Fantasy and the other was specifically made for Americans and very small children. Years later, and on the following console generation, part of why I chose to switch from Xbox 360 to Playstation 3 was because I expected the PS3 version of Final Fantasy XIII to be the optimal version. So let’s get down to how those games subverted my expectations. 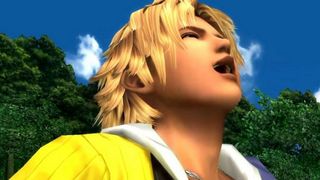 (That face when you subvert expectations)

Final Fantasy X, from a gameplay and story point of view, was exactly what I was expecting. Turn-based combat was the rule, and unlike previous and future entries you’re shown the turn order. The way elemental damage and weaknesses work felt a little simplified, but also familiar and logical. Of course fire and ice are strong against one another, of course electric magic is strong against water elemental enemies, and sure, I guess the opposite is true too. The most subversive aspect of Final Fantasy X is the very linear presentation. A vast majority of Final Fantasy X’s layout is presented as corridors with only one way leading to forward progression. There are still towns, and a handful of dungeons, but those don’t offer many opportunities to divert from the main path. You do eventually get an airship in Final Fantasy X, and there is an area that’s wide open, but exploration was very clearly not a priority when it came to level design. The Calm Lands are wide open, but even here there’s only really one way in, and one way out. Final Fantasy X’s world Spira is a varied and beautiful setting, but once you realize that it’s a series of corridors, some of the magic kind of dissipates. You still have the engaging combat, the story was very interesting to me, and backtracking in the remastered version can lead to optional encounters that are really challenging. It just doesn’t feel as real as the worlds in other Final Fantasy titles.

I played Final Fantasy XIII on day one, and during the lead-up to its launch I was working at Blockbuster Video. One of the trailers that kept playing through the store was for Final Fantasy XIII, the pre-release hype was promising the biggest and best entry to the series. It was going to be next gen, it was going to completely change not only the public perception of Final Fantasy, but of JRPGs in general. I found out later that Final Fantasy XII didn’t have the same linearity issue that X had, and even though I haven’t played XI, I would assume that an MMO wouldn’t ever be linear. My expectation going into Final Fantasy XIII was that it would open up very soon after you start playing, but after X I had a sort of epiphany: Final Fantasy is, and always has been, and cannot escape from, linearity. At its core the Final Fantasy franchise is story focused, and no matter how open these games are they will always be bound by their narratives. As open as the games can be, you can’t go straight from Midgar to the Gold Saucer, you can’t go straight from The Fire Cave to The Shumi Village, you can’t go directly from The Village of Mist to The Moon. You can’t separate Final Fantasy from linearity, but I was confident that Square had learned from Final Fantasy X and would be able to mask that linearity, present a compelling story with likable characters, and provide a fun gameplay experience for the Xbox 360 and PS3.

(It's like a sitcom, but everybody is a terrible)

Final Fantasy XIII is a series of corridors, devoid of towns, devoid of an airship, with one wide-open area kind of like in Final Fantasy X, but more restrictive until you get to the last chapters of the game. In Final Fantasy XIII you can only directly control the actions of one character during battle, and if that character dies you get a game over. You can change the general behavior of the rest of your party, but there’s no way to directly control what everyone in your group does. Furthermore, there’s no way to change your party around until late in the game because the story needs certain characters to be in certain places at certain times. The playable cast in Final Fantasy XIII is made up of a half-dozen humans who are all difficult to like or care about, and the face of this iteration is so devoid of emotion that it was retconned to be canon in 13-3 that God itself took away her emotions. Final Fantasy XIII subverted my expectations: I never would have guessed that a Final Fantasy would be so obsessed with looking good (even today, Final Fantasy XIII looks gorgeous) that it would sacrifice level design, gameplay, and story to the point that it took 2 sequels to try and make sense out of what was supposed to be going on. This was also a surprisingly challenging game but for the wrong reason. In every other Final Fantasy, it’s almost always possible to grind levels and resources if you’re having trouble with a fight. In Final Fantasy XIII, there are level caps until you get very late into the game, which makes grinding impossible, and arguably pointless. Final Fantasy XIII didn’t just subvert my expectations by being linear and having a nearly incomprehensible story, it subverted my expectations by playing like it didn’t want to be a video game at all.

Final Fantasy X subverted my expectations by not hiding the linearity inherent to its genre. It made me realize that linearity in games wasn’t a bad thing, even in games that present themselves as being open. It was a good entry to the Final Fantasy series, and I would recommend people play it if they’re curious about the series. Final Fantasy XIII subverted my expectations by limiting character growth, being linear, having unlikable characters, and needing 2 additional games to get its story straight. I can usually find the good in a bad game, and there are criticisms I can make about great games too, but Final Fantasy XIII was far worse than I would have ever guessed. One of the great things about Final Fantasy as a franchise is that it’s essentially an anthology series, so the best thing about Final Fantasy XIII is that you don’t really lose anything by ignoring it. If you really want to experience Final Fantasy XIII, the best I can do is recommend that you play XIII-2. This may subvert your expectations, but I enjoyed playing that game. The combat engine from XIII is still there, but it feels less restrictive. The plot is completely about time travel, and offers more than one ending too. My advice if you chose to play XIII-2 is to pick your favorite non-canon ending and just assume that's how XIII ends. Canon is subjective after all, and I can respect a story that ends with your main character turning into a common monster.