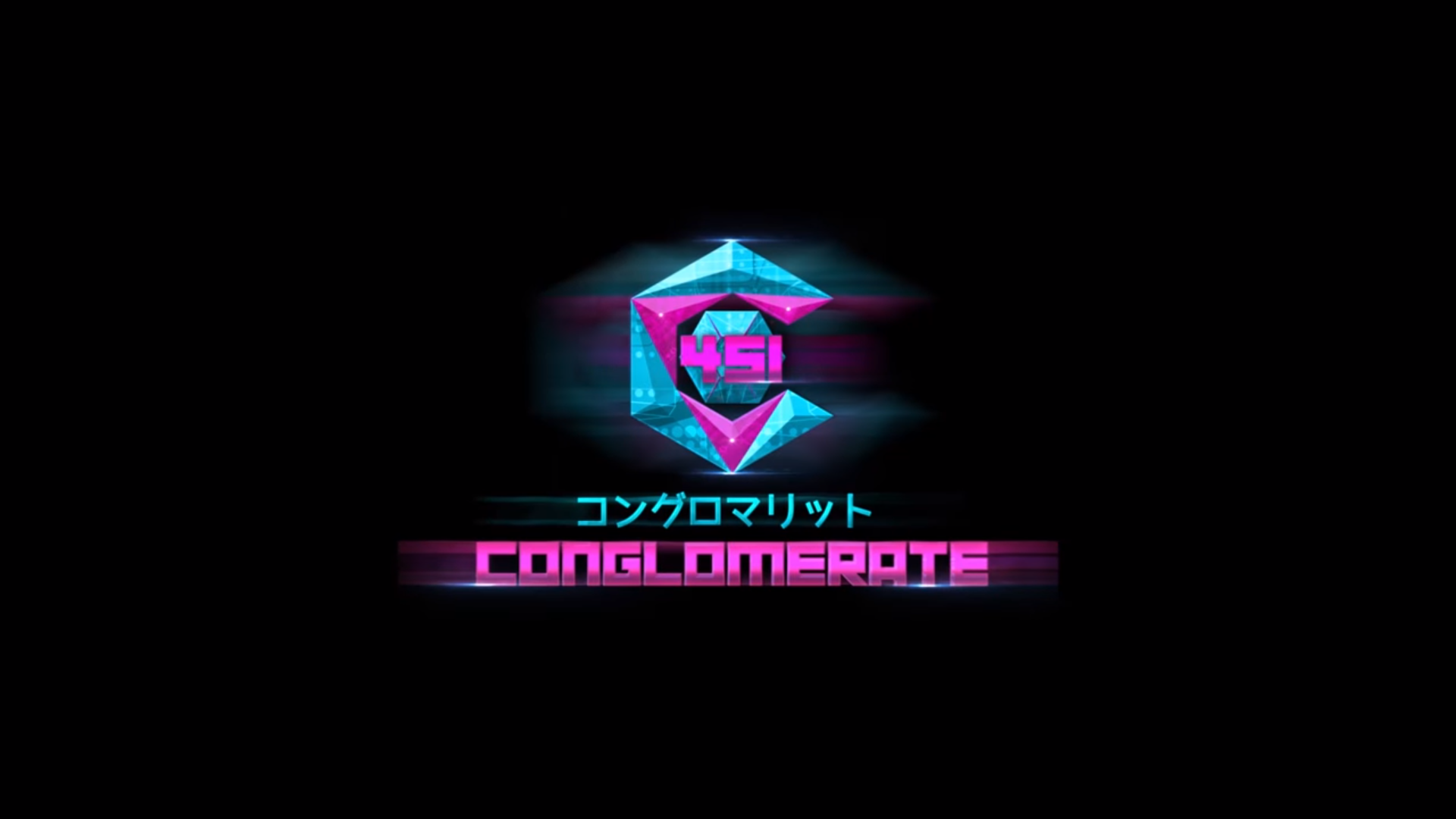 Whether it be films like Blade Runner or games like the upcoming Cyberpunk 2077, the cyberpunk aesthetic is here to stay. A small trend in games seems to be “cyberpunk plus either a game inspiration or genre.” With that being said, Conglomerate 451 is what you get when you mix cyberpunk with grid-based gameplay.

Corrupt corporations are taking over, and the government of Conglomerate City is not happy about it. They have decided to set up task forces around the city to stop the spread of these companies, which is where you come in. You are the leader of one of these task force, and your goal is to clean up the streets of Sector 451 of the city using clones.

While this game has a story, I found the story elements to be rather poor. The story itself is passive, with little story moments in the shape of small world choices inserting itself between missions here-and-there. These choices, like whether or not you want to pass out government propaganda or whether or not you want to support a rogue task force, aren’t seen in the gameplay in any away, but apparently leads to one of three story endings. The story itself had a very tiny impact on my experience, so by the time I reached the first ending, I had no motivation to explore the other two endings. The worst part of the story, though, is an AI speaker that talks to you during missions. It is supposed to be the comic relief similar to Glados from Portal, but in reality is incredibly annoying. Its humor never landed with me, and the dialogue started to repeat pretty early on, which made things worse. I’m fine with games being a “gameplay” game or a game that has more emphasis on gameplay than story, but the multiple endings makes it seem like there is a larger emphasis on the story than there actually is, and the AI speaker certainly doesn’t help. 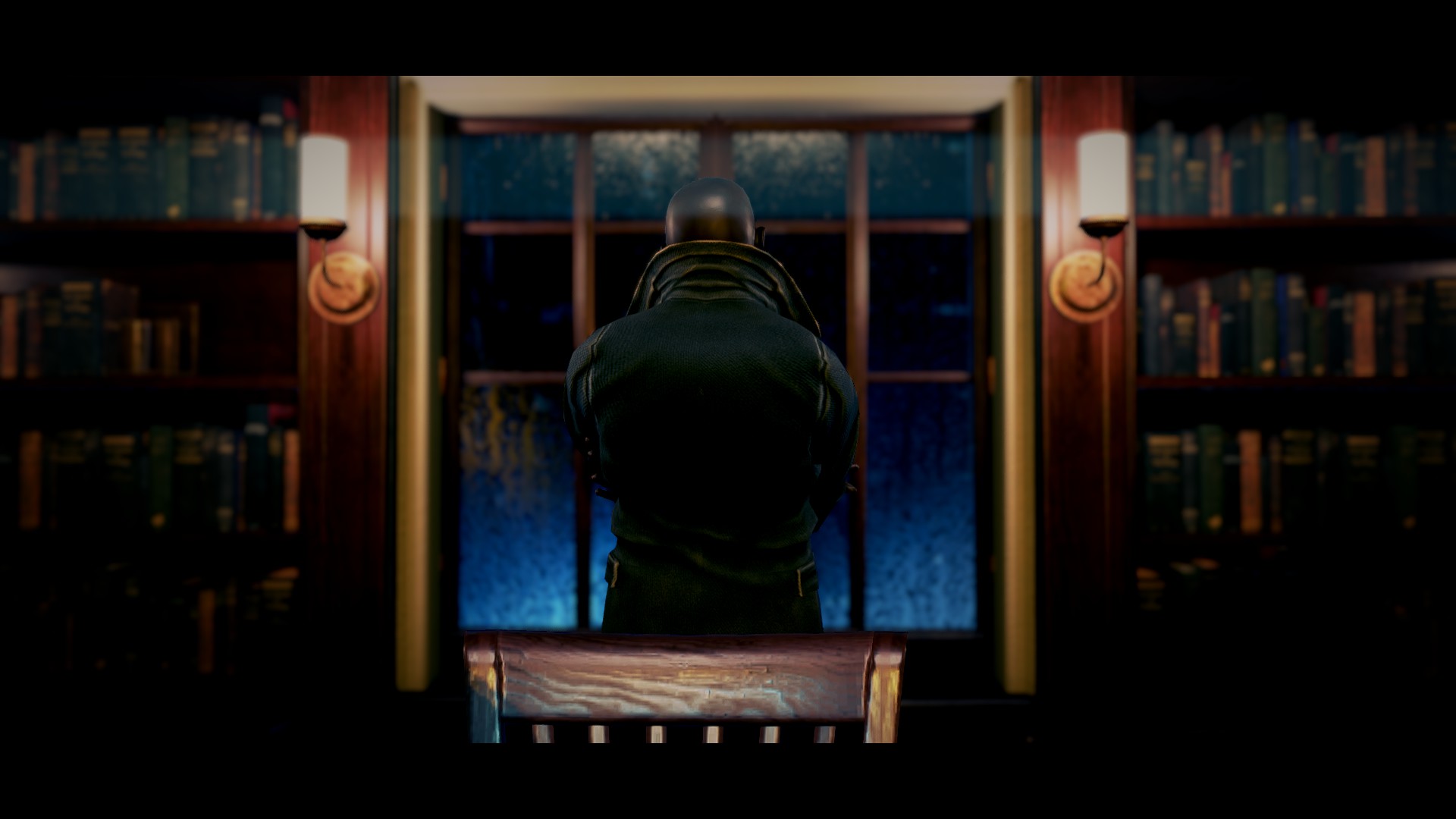 The first twenty minutes sets up a story with cutscenes, but the rest of the game doesn’t follow through.

This is my first time playing a grid-based game, so I don’t know how this game compares to other grid-based games, but it is similar enough to turn-based strategy games, which I do have a lot of experience with. In terms of the main gameplay loop, I found it fun. The levels consist of walking around a city block in search of the exit, then going to the main part of the level and doing the main quest. The main part of the level takes place in one of multiple areas, and they consist of simple quests like kill all of the enemies, kill a select target, find a certain item, and so on. Early on in the game, though, you can opt to skip the city and go straight to the main level, which I appreciated. Speaking of the levels, the game is also a rogue-lite, which means the levels have randomized layouts and missions. I wouldn’t take that to heart though, as the levels get repetitive fast, and the only major difference between each area is the look.

Every time you complete a level, you complete a week, and slowly bring down a corporation’s control on the sector. Once a corporation hits zero control, you have a boss fight. The goal of the story mode of the game isn’t to defeat the four corporations, though, but is to reach week 75, which doesn’t make sense to me and takes way too long to reach. I defeated all corporations by around week 50, so the last third was mostly just grinding levels to the end. Also, in terms of difficulty, there isn’t really any incentive to play the harder levels other than a larger gain of currency and a greater challenge, so most of my time with the game was sticking to the easy levels and cruising to the finish line. 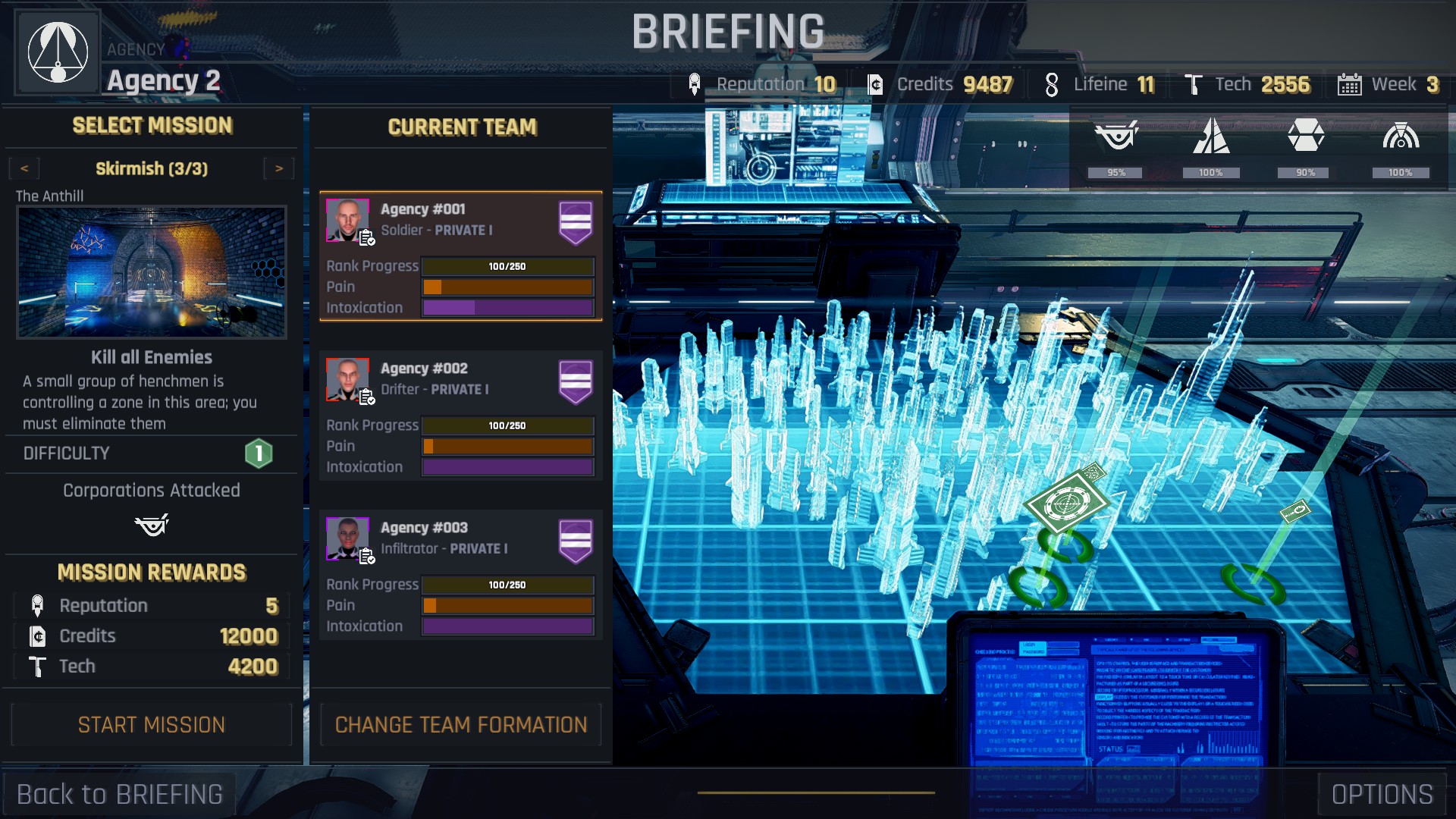 The mission select screen has up to five missions to choose from, but the game never shifts the difficulty of the levels up as the weeks go on.

In terms of what you do in the level, there are three main components: combat, looting, and mini-games. The combat for me was fun as a fan of turn-based strategy games. Not only are the various moves that you can attach to each clone fun to use, but there are even cool features to the combat like a Fallout-style V.A.T.S. system that lets you target specific body parts and the ability to hack an enemy’s brain to weaken their defenses. The mini-games can be found throughout, and are used to hack doors and get some items. While the mini-games themselves are fun and unique, I found them to be too easy regardless of the clone’s hacking proficiency and they made finding key cards to locked doors pointless. Looting is, well, looting, though what it entails is much larger than my simple description.

In my opinion, the best part of this game is the high amount of customization options for your clones. There are eight different types of clones, each with their own weapon and set of specialties. Weapons, armor, and the hacking unit used for hacking during combat can be upgraded and equipped with SPUs, an item that gives various stat boosts that can be found either through looting or by buying them from vendors in the city. Body augments can be applied, upgraded, and fitted with even more SPUs. Each class can use four of six different combat abilities, and each can be upgraded. You can even change a clone’s name and the color used to identify them. There is a lot to customize and upgrade around each clone, and the biggest risk in the game is sending out clones where if they died, I would lose all of the upgrades and progress I made with them. On top of the customization, money earned from the levels can be spent on research upgrades, which expands various aspects of the game. One of these research trees surrounds the detox tanks, which is another mechanic worth pointing out. As clones get damaged, they have a pain and intoxication bar that increases. There are detox tanks you can unlock to drain those bars, though putting a clone in a tank takes them out of the fight for a week. If the bars continue to fill, however, temporary and sometimes even permanent debuffs are applied. It’s a neat mechanic surrounding the well-being of the clones that I like. The character customization and upgrades are expansive, and are the only two things that kept me going. 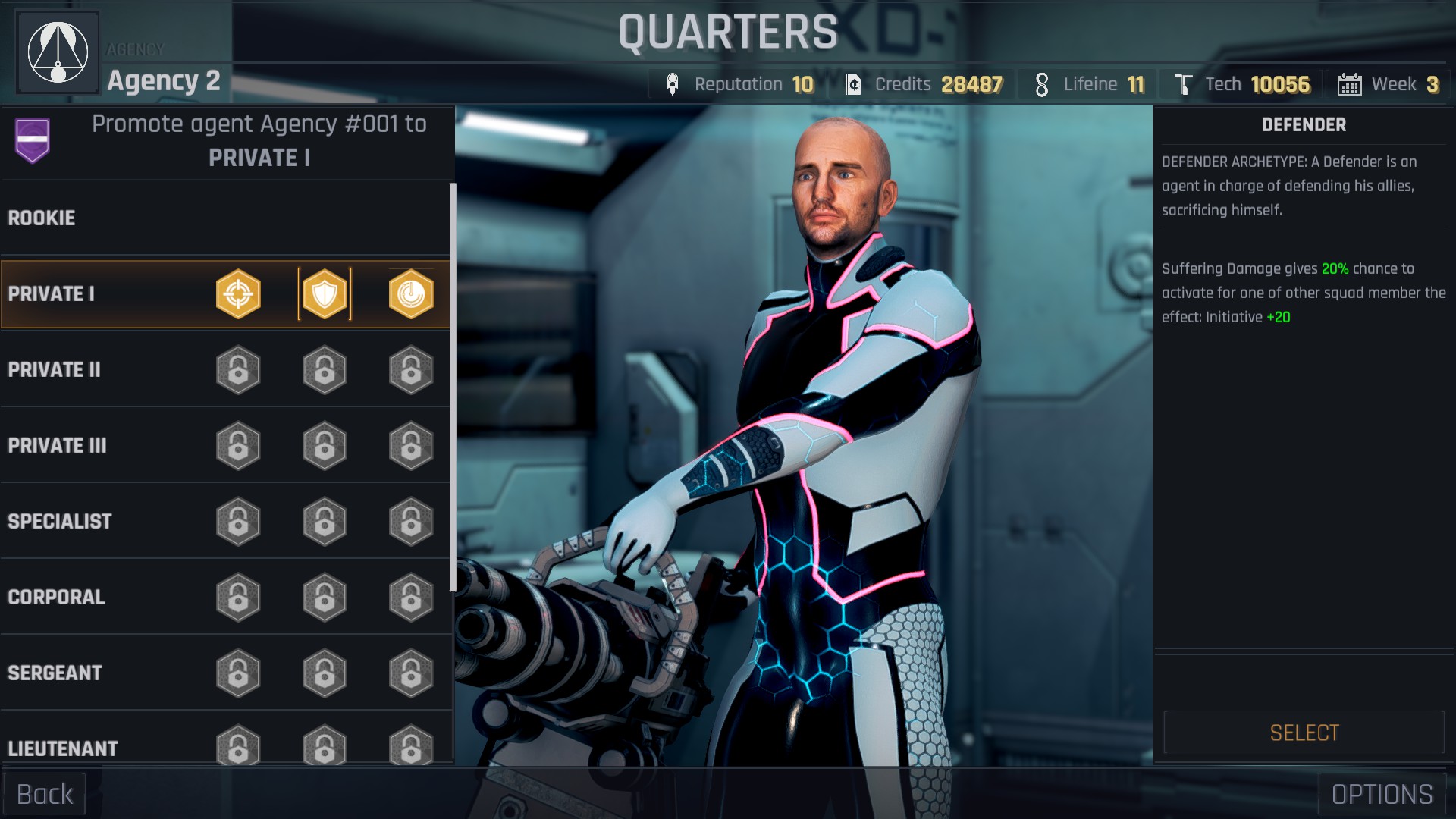 Ranking up clones and assigning them perks is one of the many ways they can be customized.

In conclusion, Conglomerate 451 is an okay grid-based game that feels rather forgettable. There is fun to be had with the game, but there are other strategy games worth playing. The customization and fun combat kept me going, while the level design and story failed to deliver. I can’t say if this game is better or worse than other grid-based games, but as a fan of strategy games, I find this game hard to recommend.