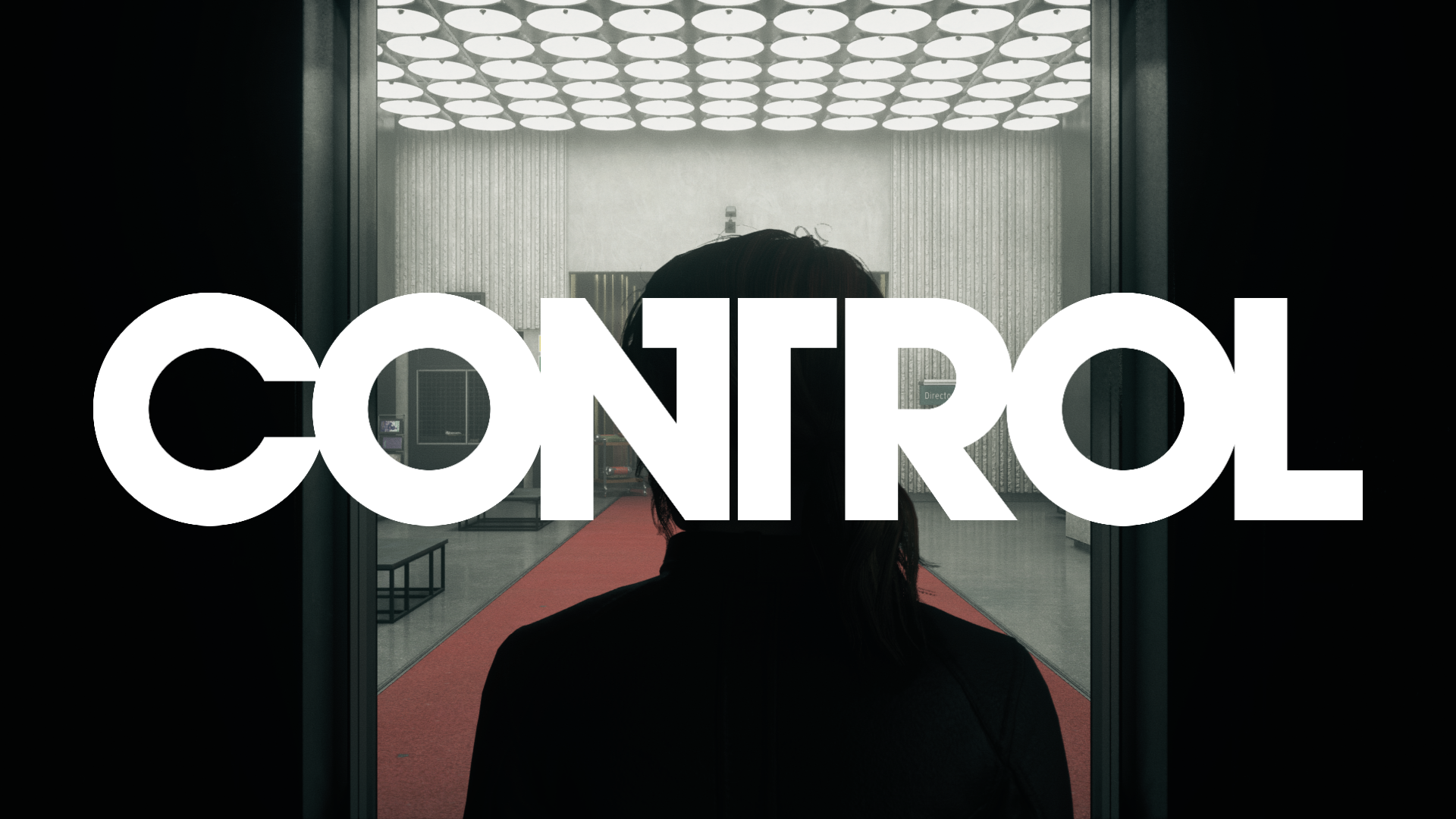 Every year, there is usually one game that just clicks with me. The game hits on all cylinders, and usually has at least one element I have a great interest in. In 2017, Cuphead was that game for me, and its challenging-yet-fun gameplay and amazing art style had me hooked from its first announcement. In 2018, God of War delivered what I think is the perfect balance between a cinematic and gameplay experience with a single-shot perspective that made sure I never drifted away from its compelling and grounded story. What about 2019? For me, that game was Remedy’s Control, with its incredibly intriguing world and surprisingly fun combat. Cuphead and God of War were my top games of their release year, and Control is no different.

Jesse Faden is on the hunt to find out about her past and what happened to her brother. Her investigation leads her to The Oldest House, a building hidden to those not looking for it ran by a secret government agency known as The Federal Bureau of Control. The Bureau, known as the FBC, is under attack by a supernatural force known as The Hiss during this time, and Jesse suddenly becomes the director after picking up the previous director’s service weapon. Now, it is up to Jesse to save the agency from a threat no one outside of the building knows about and figure out more about her past.

If the plot description in the last paragraph doesn’t make sense, that’s because there is too much to explain. Control is by far the most intriguing world I have ever experienced in a game. It’s a secret government agency that examines and contains anomalies that take over everyday objects. The world in-and-of-itself is cool, but this game really builds on it in an incredible way. The intel scattered around this game is fascinating to read as for it fleshes out the world and shows just how intricate it all is. Plus, I love the way they are written, as for they do a great job at making these extraordinary objects and events sound like another day on the job. This is the first time in a long time where I actively looked for and read all of the collectibles I could find. When it comes to the world of Control, this single paragraph doesn’t really do it justice. I could (and may) make an entire blog just on the world of this game, and how incredible it all is. 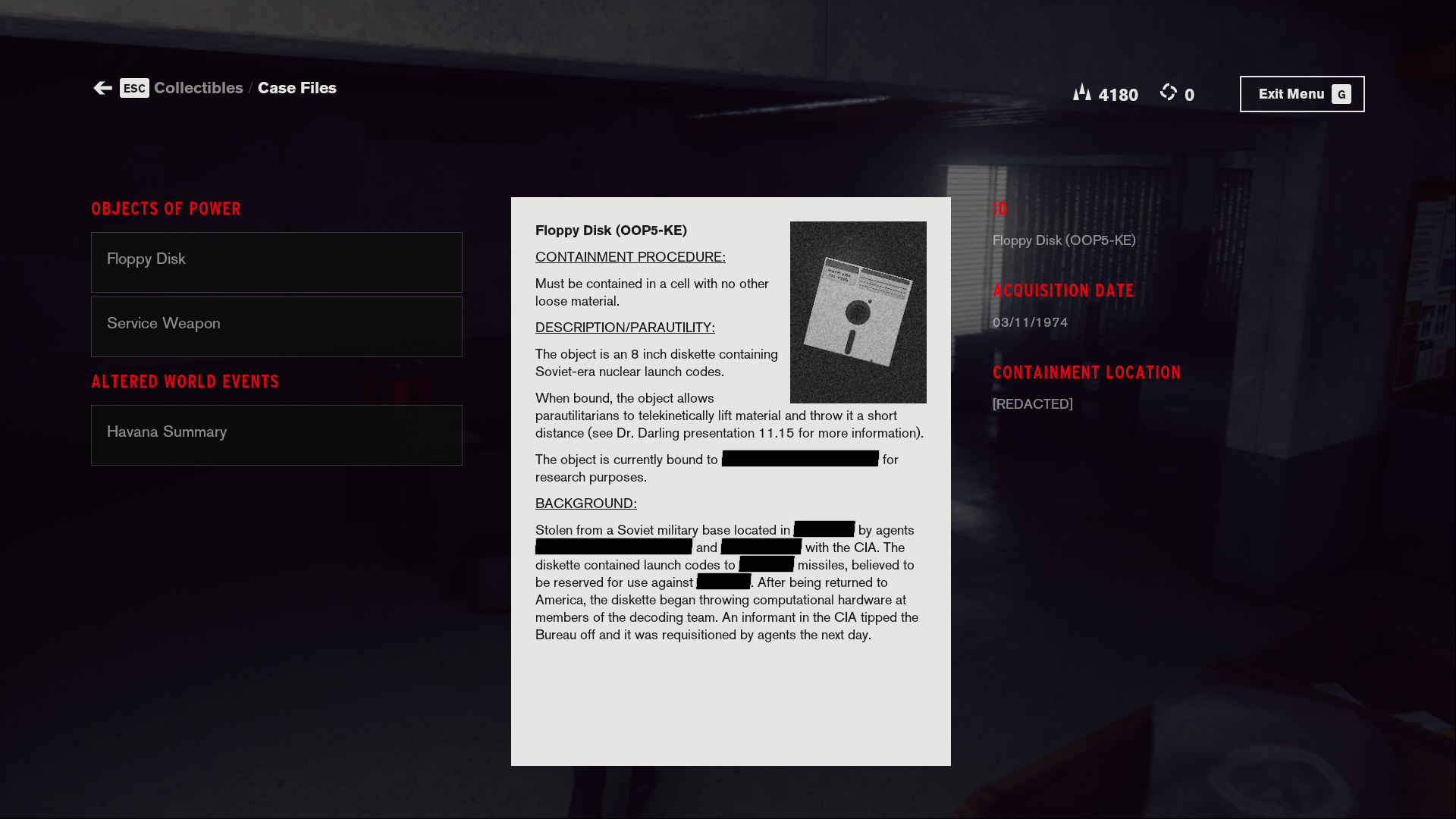 Control is a world of black bars, objects with supernatural abilities, and a building that is larger on the inside than the out.

The world building carries the narrative elements, but that doesn’t mean everything else is bad. The story isn’t anything to write home about, but it still is a decent story that unfolds an interesting past and future as it goes along. It starts out as the protagonist looking for her brother, but as it goes on, you learn about their past dealings with an anomaly and the ways the FBC has secretly been part of their lives. What boosts the story and the world are the characters, who are fun to be around. The quirky scientist Dr. Darling is always interesting to watch, while the monologues of former director Trench adds context and weight to the situation, and Ahti the janitor is a mysterious man that is way more than what meets the eye. The one character who didn’t quite click with me, though, is Jessie, as for her sudden willingness and almost excitement to pick up this role felt a bit unrealistic. Also, I felt like there were still a lot of loose ends that the ending didn’t quite wrap up. Still, there is a lot to love with Jessie and her monologues, and the characters in this game are a blast to be around.

I could talk all day about the story and world elements, but what about the gameplay? Is this game fun to play? Fortunately, Control is a blast to play. The game is in the form of a third-person shooter with metroidvania elements to the world. The world is a lot of fun to explore, as for reading about the world through the collectibles then actually going and seeing that thing in the game is a lot of fun. There are so many cool parts to this game I want to talk about, but I won’t because I think finding them yourself would be way better. The one issue I have with the world is the map, as for it doesn’t show current location and it doesn’t do a great job at showing verticality. The world does do a good job at putting in visual markers as to where you are, but the map would have been better to use if it was actually usable. Still, this world is a lot of fun to experience, and I think it may be my favorite game to explore to-date. 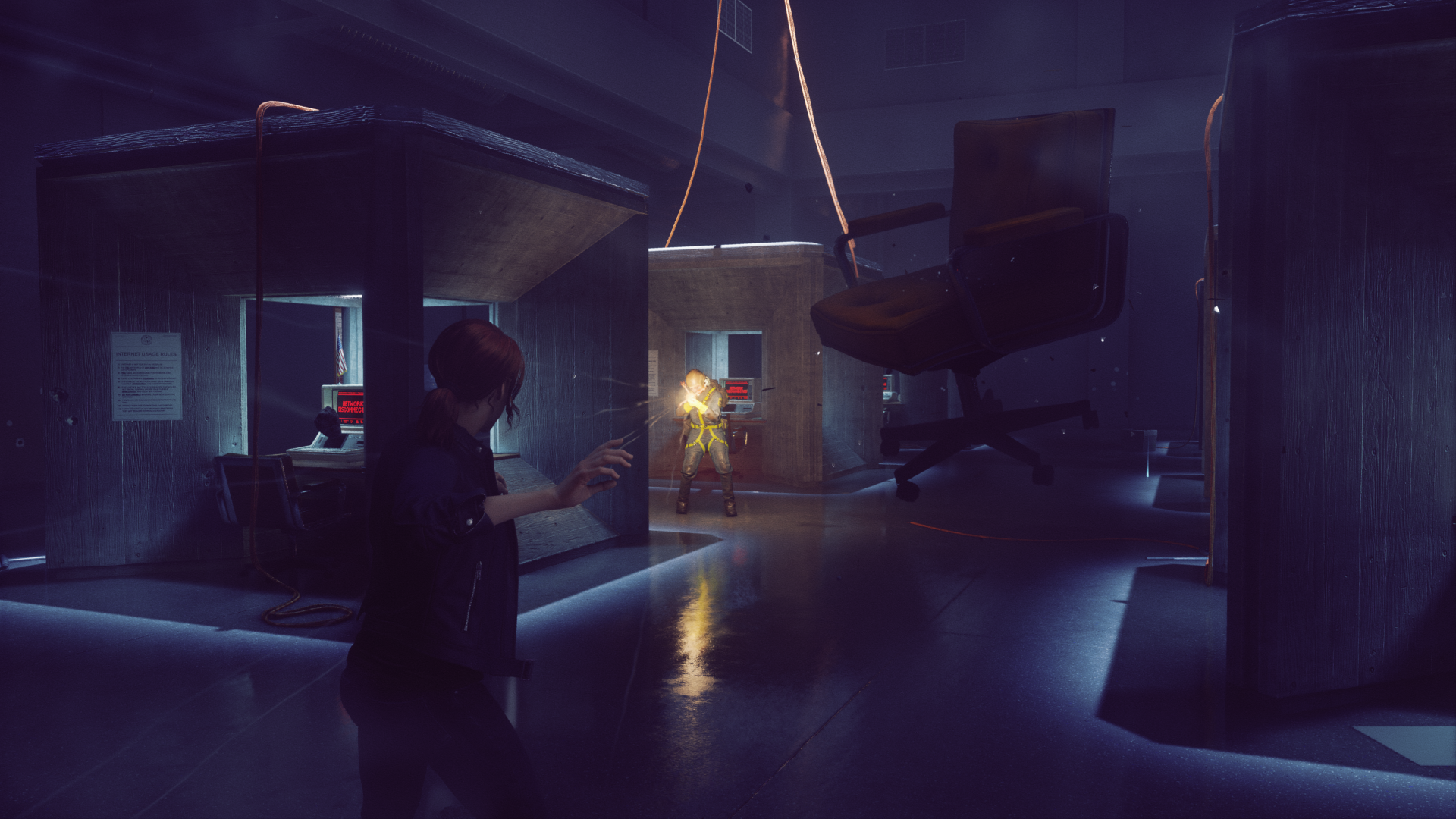 Not having to look away from the enemy to grab an object with telekinesis didn’t disrupt the flow of combat.

When I think about games that put a lot of effort into the narrative or cinematic elements of the game, I usually think the gameplay will be lacking. Control proves me wrong with surprisingly enjoyable combat. It doesn’t reinvent the wheel, but it feels refined, and the various weapons and abilities give it variety. The combat can be broken down into two parts: the weapon and the abilities. The Service Weapon is a shape-shifting gun that can take the form of five different weapons (a pistol form, a shotgun form, etc.). On top of that, there are mods that are picked up throughout the game that can applied to weapon forms and to Jessie that boosts various aspects of the gun and character. The guns are fun to use, but it’s the abilities that makes the combat a blast. Throughout the game, you get a few supernatural abilities, including telekinesis and levitation. The telekinesis was the most fun to use, as for you don’t need to aim at a particular object to use it. Instead of aiming at an object then using telekinesis, you can just hold the button, and something will come, which didn’t break the flow of combat. The combat is at its best when all of these items are used together. Floating in the air, shooting and throwing debris at bad guys, then ground pounding whoever’s left was super cool to me, and I had a blast when all of these things worked together and made the combat flow. The only two complaints I have in regards to combat are poor checkpoints and a few bad boss fights, but they did not get in the way of surprisingly fun combat.

To make things even better, the game looks absolutely incredible. The game has a great 70s government look, the graphics are incredible, the faces look great, and so much more. The game also has a photo mode, and seeing some of the environments without any HUD or character look wallpaper-worthy. Speaking of the environment, the game also has the best destructible environment I can think of. Just about everything in the game is a free-standing object, and the walls and floor also break. One of the items I found that exemplifies this are the projectors playing the Dr. Darling tapes. In this game, you can actually use telekinesis on the projector, and the video will actually travel with the projector instead of the projector or the video being glued down. Control is one the best and coolest looking games I have ever played, and its destructible environment makes it feel meticulously designed. 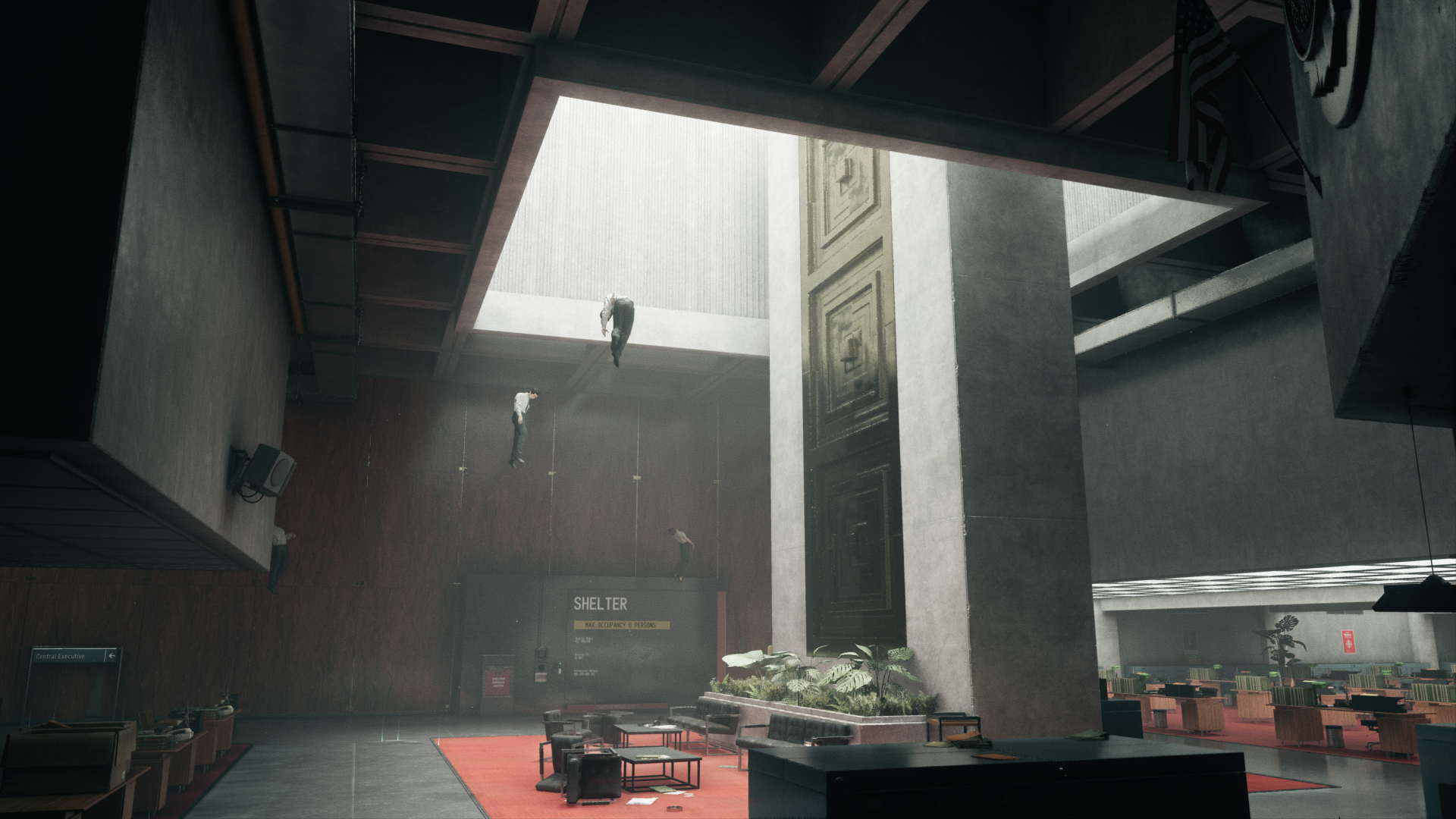 I cannot overstate how great this game looks.

In conclusion, Control is a game that I absolutely love. Its incredible world building and 70s government look mixes well with its surprisingly fun combat to make a game unlike any other. There are a few tiny flaws here-and-there, but they didn’t stop it from being my top game of 2019. I think this is a game everyone should experience, and I can’t wait to see what Remedy does next.