I like "small" games. With them, every bit has to work perfectly, rather than hiding the shortcomings under all the bells and whistles. And Switch'n'Shoot (Matt Glanville) is definitely a "small" game... and a very pleasant surprise for me. I played this on Switch, but it's available also on Steam, iOS and Android. I'll talk only of the Switch version here. 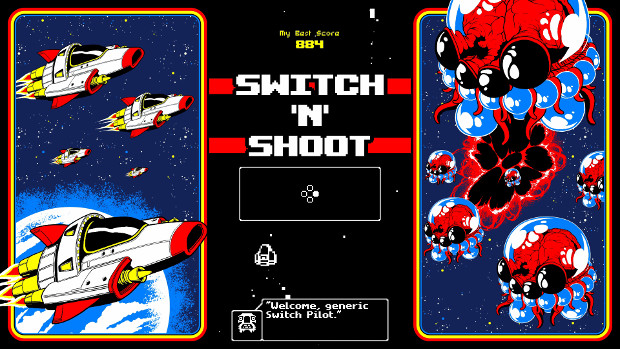 There's only one button: fire. The trick is that whenever the player shoots, the ship will change which side it is flying towards.

Enemies come down at an increasing rate, and powerups come down at intervals as well. If the player fails to catch it, their ship firepower decreases by a level. If they catch it, the firepower increases by one level and the sixth level is actually a hyperjump to the next sector where the progression starts from level 0 but harder.

This isn't a review. Instead, I thought I'd look at the small things I think the game "gets just right".

"8-bit" visuals. There are very few colours on screen and it is very pixelated. Black, red, white, blue in the default colour scheme. Plus I don't know how this could have been implemented well using 3D. More detailed 2D might've worked as well. 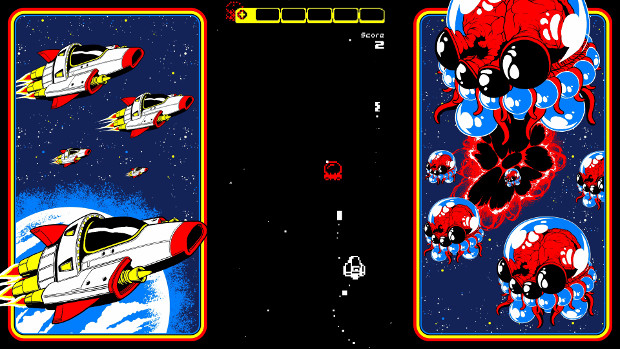 The marquees on the sides. Looking at them too closely, all the ships are the same image but in different sizes. The same with the enemies. But the feel of them is great. I'm not even an amateur on arcade cabinets, but I really like the flat cartoony colours. Likewise, the way the ships and aliens cross the borders is important. The same effect as in comics when a character or effect doesn't stick within the "frame".

These marquees describe the vast majority of the game in great detail. When I play the game, I don't see the sprites so much as these bigger images of what the sprites supposedly represent. That effect is just one reason I wish Dot Arcade had been released in Europe. 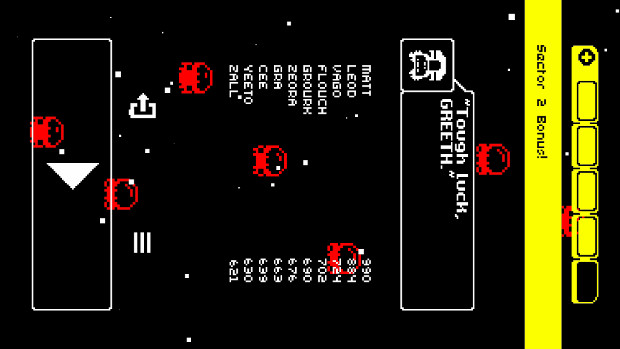 Sideways. The boss saying something adds a bit of levity. The player's names are all random, except "Matt" there, which was the top score from the start...

Narrow screen and vertical mode support. I can't imagine the "change direction only when firing" would work on a wider game field. Second, even a little game like this supports turning the display 90 degrees to use the Flip Grip. Shikhondo does not, and as a word of warning: avoid that game. I've seen Steam comments how the movement controls don't always register, and I believe I have encountered the same problem on Switch with the Pro controller.

Screen shaking. The game doesn't have rumble, but the screen shakes a bit when an enemy is destroyed. The shaking in Vlambeer's games (at least Nuclear Throne and Luftrausers) tends to make me feel sick, but S'n'S keeps it in moderation.

Many small things here are right as well.

The enemies aren't dropped uniformly at random. Instead, as the drop rate increases, the enemies drop more obviously close to the previous one. I wouldn't be surprised to hear if they're dropped by a "fake" player ship that randomly changes directions just above the screen. As such, I don't think the game gives the player a theoretically impossible task with this.

The sides of the screen wrap -- until the player gets the fifth powerup. That adds deadly barriers to the sides, and changes the three-bullet weapon into a laser that shoots directly forward. The three-bullet weapon already was "too powerful" in a sense, but the (constantly firing) laser forces the player fly closer to the walls to get the enemies there. To put it shorter, the increasing progression of firepower is first twisted with the laser and then reset with the hyperdrive jump to the next sector, restarting the cycle. 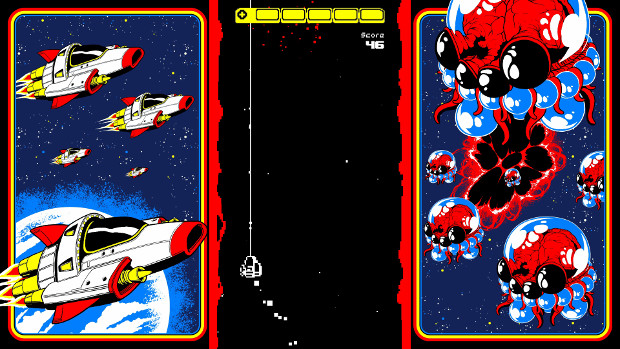 Laser, with walls of death on the sides. And one alien blown to pieces near the top of the screen.

Risk vs reward. If the player misses the sixth powerup, the weapon will downgrade back to the three-bullet spread but the side barriers will remain. And when the player picks the next upgrade, the barriers will inch closer than they were before, making it harder to stick between the lethal borders. The enemies also keep dropping at an increasing rate. Of course, getting to later sectors will increase the final score multiplier.

The enemies don't just fly past the player; they stop at the player's level for a moment before exploding. This means they can block the player from collecting a falling powerup icon a bit longer. And only the tier 3 and 4 weapons shoot in any kind of spread. As such, missing an enemy is bad, but not an instant gameover.

The game has also effectively single-hit-gameover, although there are shield powerups that will shield the player's ship from one hit (with a highly appreciated short grace period afterwards). Starting a new game is also very quick, which works well for a "one more try" type of game. After playing a score attack game where one session lasted for hours, the brevity of a single run is very much an upside for me. Or maybe I haven't learned the game well enough yet.

The fourth sector changes things up a bit -- that's something of a boss level. I don't know how many sectors there are in total, but my best is reaching sector 6 and reaching sector 7 unlocks the last colour palette.

The game might be too trusting towards the player. If I press two buttons at the same time like most game controllers allow, the ship doesn't actually switch the direction but shoots twice. This means it's possible to keep wrapping the screen edges and shoot down the enemies before they reach the bottom of the screen. Mind you, this hasn't given me a shortcut to a new high score, but I haven't really spent time learning to use this either.

Overall -- if you know this type of game is to your liking, I think you should give it a go especially if it's on sale (like when I bought it). I know I sounded like a fanboy, but I've played the game for "5 hours or more" now and I'll keep playing it more.

(After trying out so many cheap bad games on the eShop, I think I'm allowed to spread the joy of finding one game I liked.)