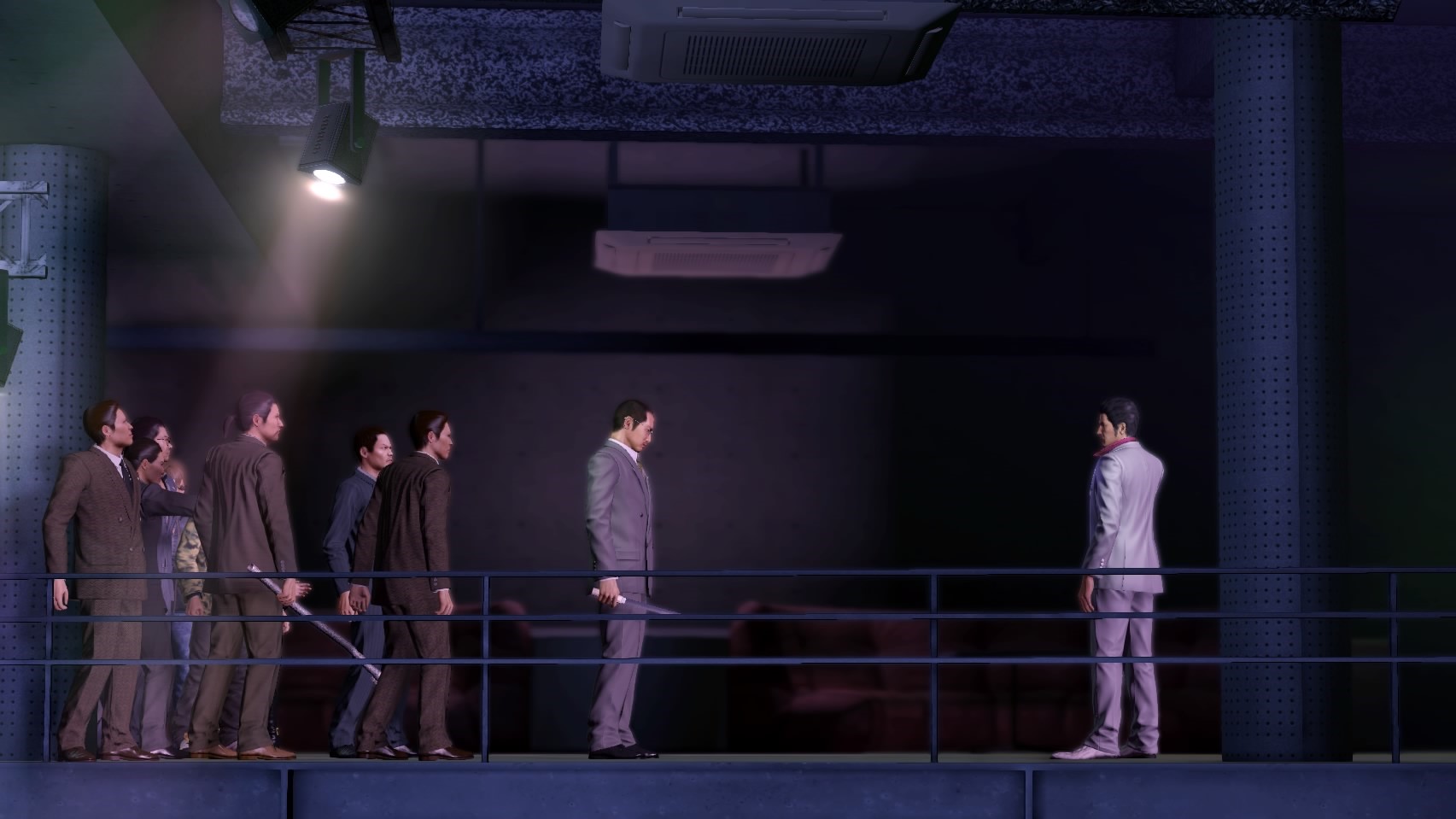 Kiryu’s Yakuza brother Nishiki was involved in a murder, and Kiryu decided to take the fall for it. After spending a decade in prison, he is brought back to the world of Kamurocho and to a Tojo clan in a mess. His longtime friend is gone, ten billion yen has been stolen from the clan, and a mysterious girl is put under his care. Just another day in the life.

Yakuza Kiwami is based on the first game of the series, but I am glad I played 0 first, as for it sets up the story in this game well. This game sees the return of many characters from the prequel as well as some new characters, and it still sees one strange, convoluted, twisting and turning story. This story overall didn’t feel as memorable as the prequel, but it’s still a solid story and it even has some aspects I found better than 0. Majima isn’t a playable character in this game, but he really shines as a character. He’s crazy yet sincere when it matters, and he is someone I love no matter how annoying he can get. The last story felt more focused on a constantly-twisting narrative, but this one feels more emotional and grounded, and I was surprised by what happens throughout this game that relates to its more emotional feel. The highlight of the story, though, is the ending, which I think wraps up the story really well. The more I play these games, the more they feel like seasons of a tv show, and Kiwami feels like an equally strong second season, even though the first time around is more memorable. 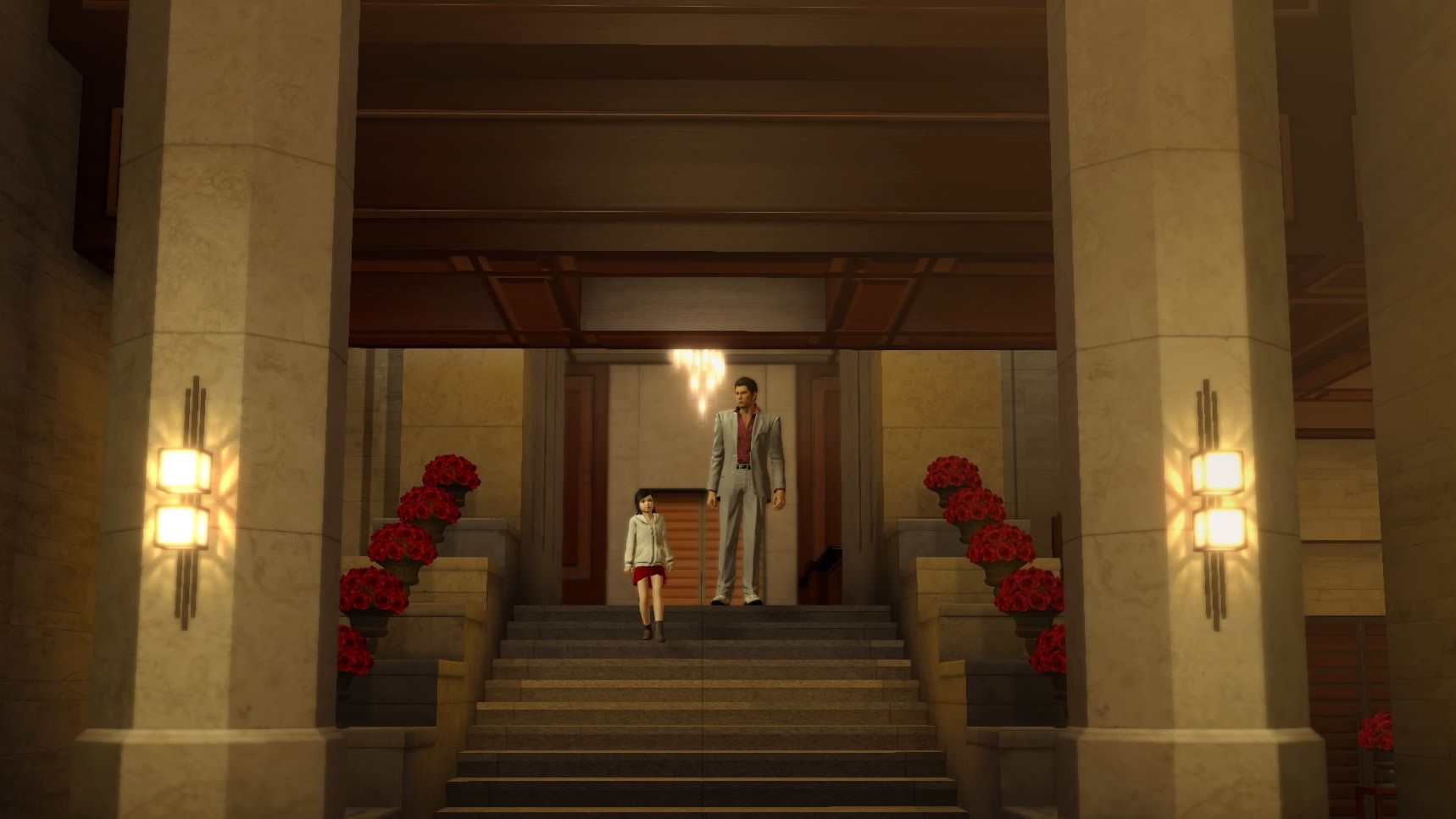 The kid character isn’t annoying, for once.

In terms of the gameplay, Kiwami plays like the last game in many ways. I knew going into this series that the city and overall gameplay would be the same, but one thing I found a little surprising is missing content from the prequel. I get that this game is a remake of the first, but it is still awkward to have that back-step in gameplay.

So, what is missing? It’s hard to say considering the size of these games. While I do spend a considerable amount of time exploring each game and trying out as much as I can do, there are still smaller things I could’ve missed with both the last game and this. Smaller stuff aside, there are a few large cutbacks from the last game. Since this game is entirely from the perspective of Kiryu, Sotenbori as well as Majima as a playable character is gone. Having a second playable area was refreshing, and I really liked Majima’s fighting styles, so seeing this side of the game gone is a bummer. Kiwami also has less focus on getting money compared to the prequel, so there is no business meta-game here, which is also something I miss a lot. Outside of these major subtractions, there are smaller ones like not being able to throw money or some mini-games here-and-there, but these smaller subtractions made sense to me, so they didn’t really impact my experience.

This game does make some notable subtractions, but also has some notable additions and changes as well. The biggest addition is the Majima Everywhere mechanic, in which Majima will pop up at random times to fight you. Some of the fights are basic street encounters, while others are built more like quests. The name doesn’t lie, as Majima could be dressed up like a cop, bartender, or even hiding in a giant street cone waiting to fight you. This sounds like it could be annoying, but the game does a good job at giving you options to opt out by either running away from him or avoiding him on the mini map. This mechanic shows just how crazy yet cool Majima is, and I loved either fighting him or being able to avoid him when I wanted to focus on the main story.

Like I mentioned earlier, this game has less focus on making money, and one of those ways is by changing around the leveling and skill trees. In Kiwami, you gain xp traditionally, and use skill points in four skill trees, each focused on different aspects of the game. I liked the focus on money for the sake of the business meta-game, but I think this traditional leveling system makes more sense. One of these skill trees is focused on the Dragon style, which is a new fighting in this game. This new fighting style, however, was useless for me, as for it takes awhile to level up, is rather basic, requires a different method to charge up its heat gauge, and was rather weak compared to the other fighting styles. It may be the best fighting style once fully leveled up, but it isn’t worth the time before then. 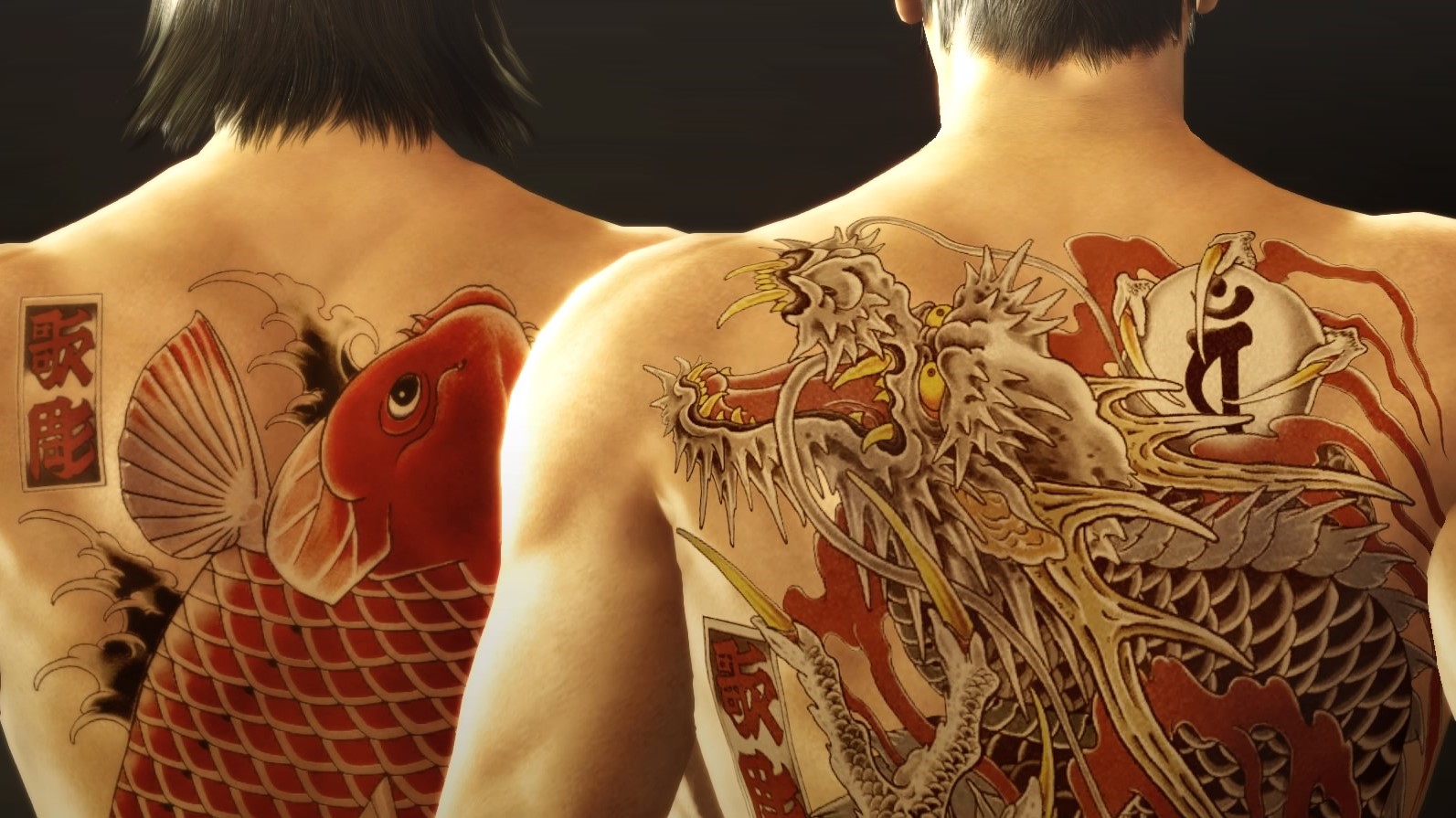 The dragon may be on Kiryu’s back, but he doesn’t really put his back into the dragon.

Smaller additions and changes includes the removal of the friend meter from the prequel, which was neat in concept but grindy in practice. There is a lot more gambling in this game, though the lack of emphasis on money makes it feel insignificant. The collectibles are different, and one of them is even tied to a mini-game. Unfortunately, the mini-game in question is an evolved form of a pervy rock-paper-scissors game. Finally, you can save outside of payphones, which is a fix on a minor annoyance.

One quick note I want to say on combat is how frustrating I found it to be. I don’t know if it is this game or a culmination of hours between this game and the last that had me wanting to throw my controller, but I found bosses to be incredibly frustrating. It still is fun combat, and I can’t really fault this game for a combat system that is largely the same as the last game, but I still had some frustrating moments here-and-there.

Before I wrap things up, I want to talk about what is the same between this game and the last, because a lot of this game is the same. The map is the same, a lot of the mini-games are the same, the combat is the same, new game plus and premium adventure returns, climax battles returns, and more. Kiwami plays like 0 in many ways, and I think it will be hard to rank some of these games by the end of the series because of these similarities. 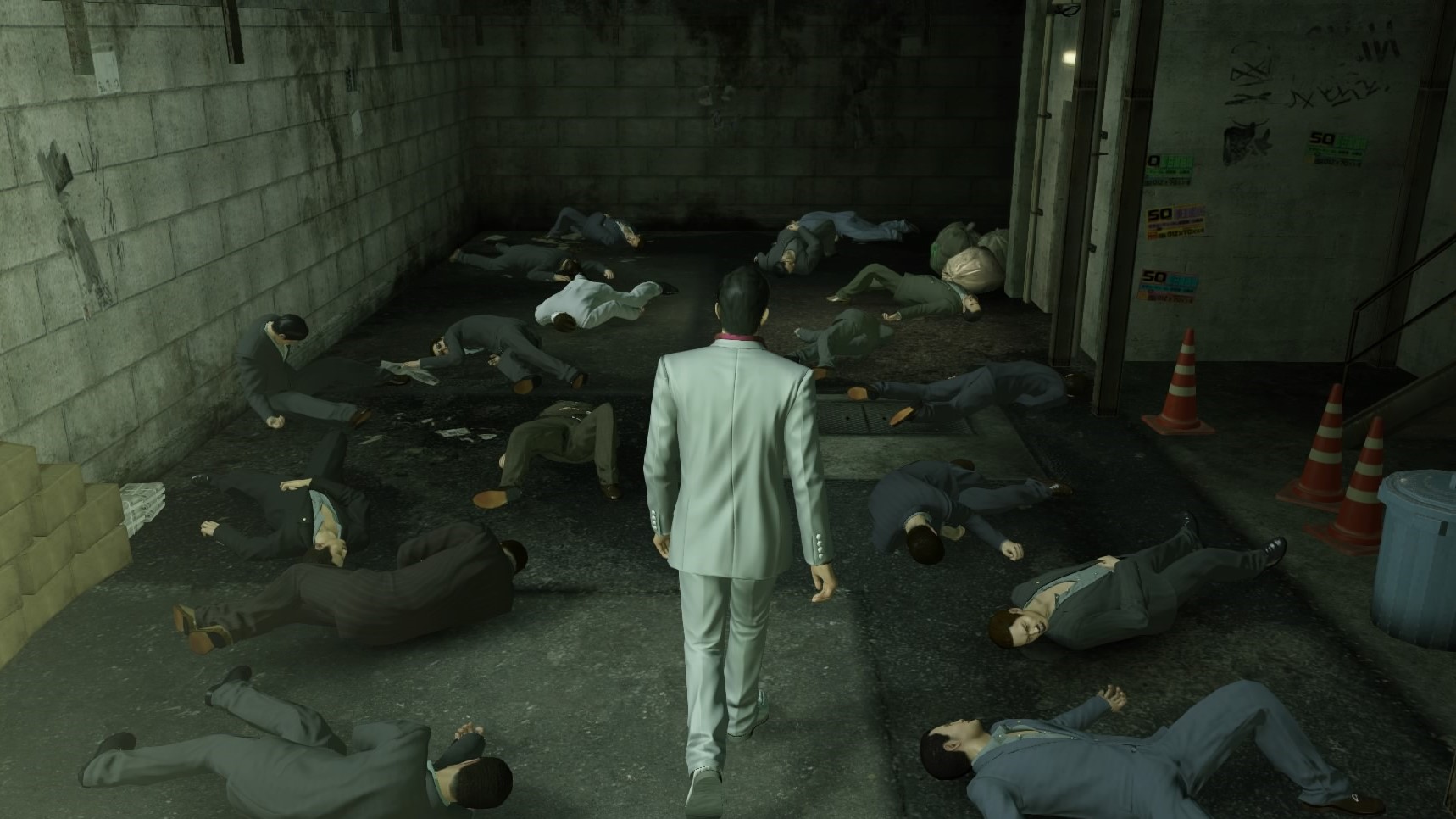 In conclusion, Yakuza Kiwami is a slightly underwhelming yet still enjoyable sequel to Yakuza 0. It’s a little unfair to play this game after 0 considering this is based off of a PS2 game, but I think the prequel would’ve ranked higher than this game if I played this series in a different order. In the end, I am ranking this below 0 at the number two spot, and I honestly have no clue where I think it will be by the end.