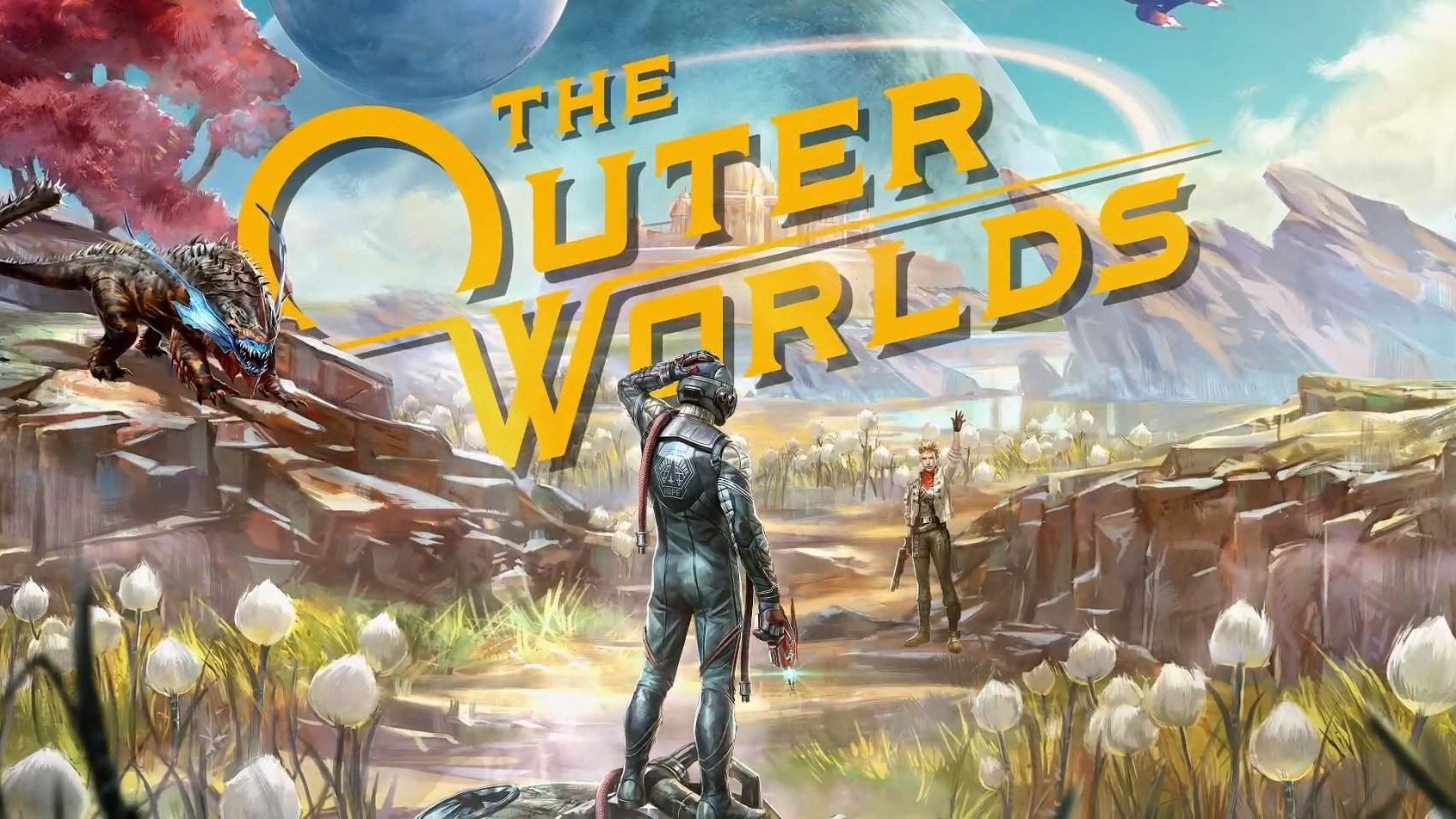 For the past decade, Fallout: New Vegas has been the best game of all time for many. Despite newer games, New Vegas is the game they constantly return to. Bethesda hasn’t shown much care for the franchise, but Bethesda also didn’t make New Vegas. So, when Obsidian, the actual developers of the game, announced a new game heavily inspired by their decade-old classic, it was a definite cause for excitement. Fortunately, I can say this game does what it sets out to do, but to a fault.

You play as a traveler in a far away solar system awakened by a rebel scientist named Phineas, who tells you the people in the ship you were on need to be reawakened as they are the system’s last hope. You are then tasked with jumping around multiple planets in search of a way to awaken the ship, though whether or not you want to do that is up to you.

New Vegas is a game that comes up time and time again when discussing this game, and that is for a reason. From its first announcement, The Outer Worlds was a spiritual successor to the older Fallout games; a plug to fill in the gap left by Bethesda. Choice as to how you want to play, stats to build your character, dialogue options, tough choices, factions, and more can be seen between the two games. If you’ve played New Vegas, you know what you are getting into, which is both one of the best and worst aspects of the game. The Outer Worlds follows its inspirations to a fault, and while its inspiration is great (and thus, making this game great), it’s also a familiar game I feel like I have already played. I can see the appeal of wanting more of this style of game, but I found the experience to be boring at times because it is one I already know. 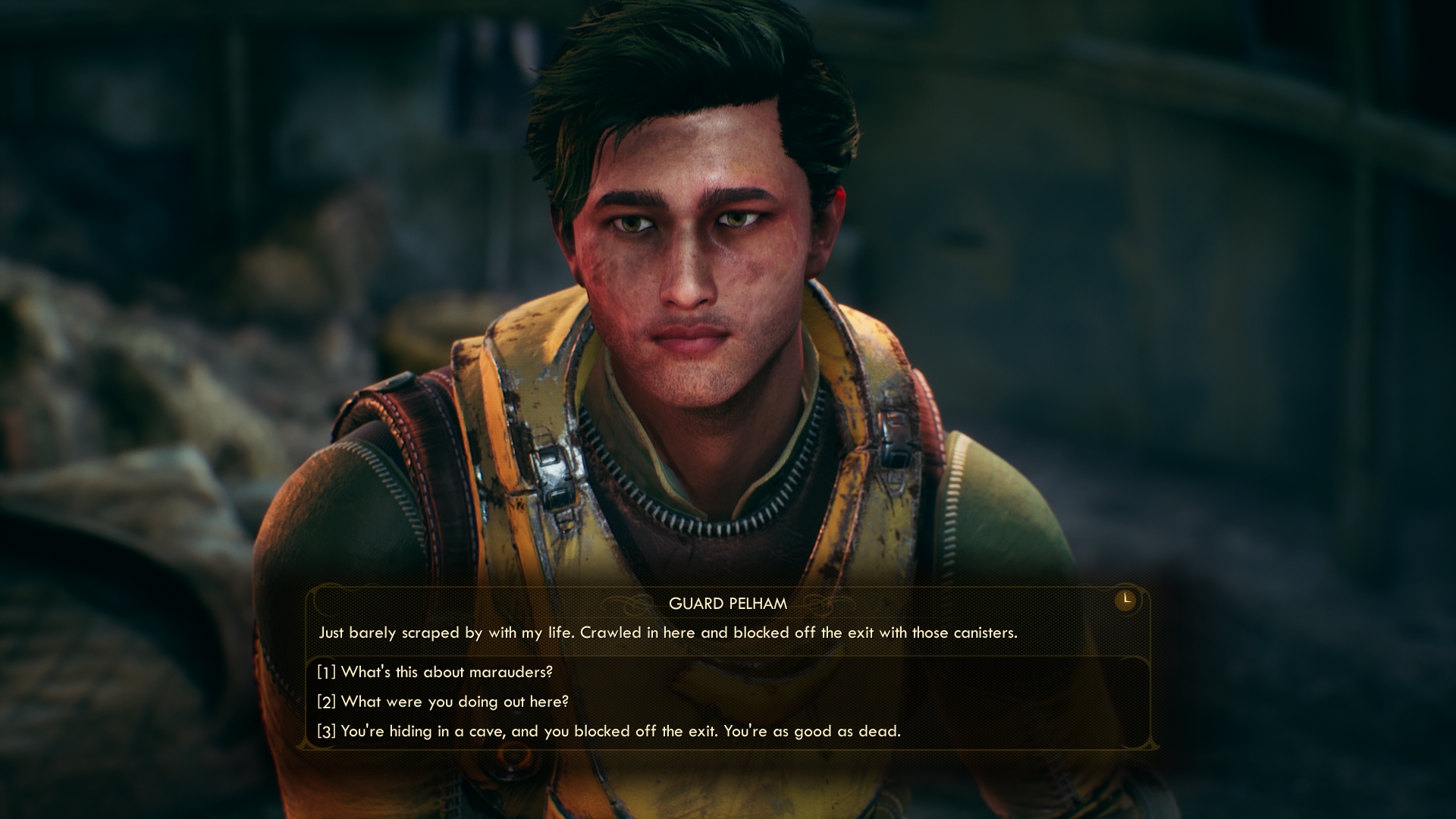 The Outer Worlds presents itself as a game full of choices. Dialogue choices, character builds, playing as the “good guy” or “bad guy,” and other mechanics speaks to the replayability of this game. the best part of this game spawns from this choice, that being the tough choice you have to make to advance the plot. The start of the game has you stuck on a planet with a ship needing a power core. There are two power cores on this planet, and they provide power to the two groups using them: the local cannery (a corporation), or a group of outsiders. As the mission progresses, the choice of who to take the power core from becomes tough, as the game gives a glimpse into both sides and the consequences of removing power from one of them. I made my choice (I took power from the town), but I felt like I made a wrong choice, and the game enforced that feeling by making me walk through the now-dark and disturbed town and confront the leader of the town who told me the dire situation he is now in because of my choice. This is one of the toughest choices I have ever made in a game, and the most brilliant moment in this game as well as in games I played in 2019. Sadly, nothing comes close to this in the rest of the game, even when they try to replicate this tough choice later on. As for doing multiple runs, I didn’t find other runs as drastically different as I hoped they would be, so I found starting a second run difficult. The game ends with a slideshow similar to New Vegas, so all I felt like I would achieve with other runs are different slides. Different character skill choices felt like they had the most impact on my run, as different dialogue options and even mission outcomes changed based on what I put my skill points into, but that alone isn’t worth trying out different character specs in new runs. Also, I found there are enough skill points given throughout the game to make a jack-of-all-trades character that can get through 90% of the game just fine, with its impact only coming in at the end. Maybe it’s just me, but for a game that advertised replayability and big differences based on choice, I didn’t find any of it to be different enough to go back to.

Not all of the missions are big morally grey missions like the one described earlier, but they do have smaller choice as to how you want to tackle each mission. I had one mission where I needed to oust a factory owner by any means. Instead of going in and killing him, I increased the productivity of the robots in the factory, which got him fired. It isn’t worth multiple runs to see everything, but a lot of missions have these smaller choices that are fun to see. Speaking of choice, one thing I haven’t talked about are perks, which offer more significant stat boosts compared to skills. You get one perk point every other level, and there are a lot of perks to unlock, so it would seem building up certain perks would be like building up the character itself. Unfortunately, I found only a few of the perks to be worth it, and I began wasting perk points on other perks pretty early on. I found this significant, as for one of the features of this game are flaws, which are picked up randomly throughout a game and will give perk points in return for certain debuffs. I think it’s a neat mechanic, but since there aren’t enough perks worth unlocking, I found the mechanic to be useless for me. I didn’t think building my skills would be more useful, but dialogue options were more important to me than 90% of the perks offered. 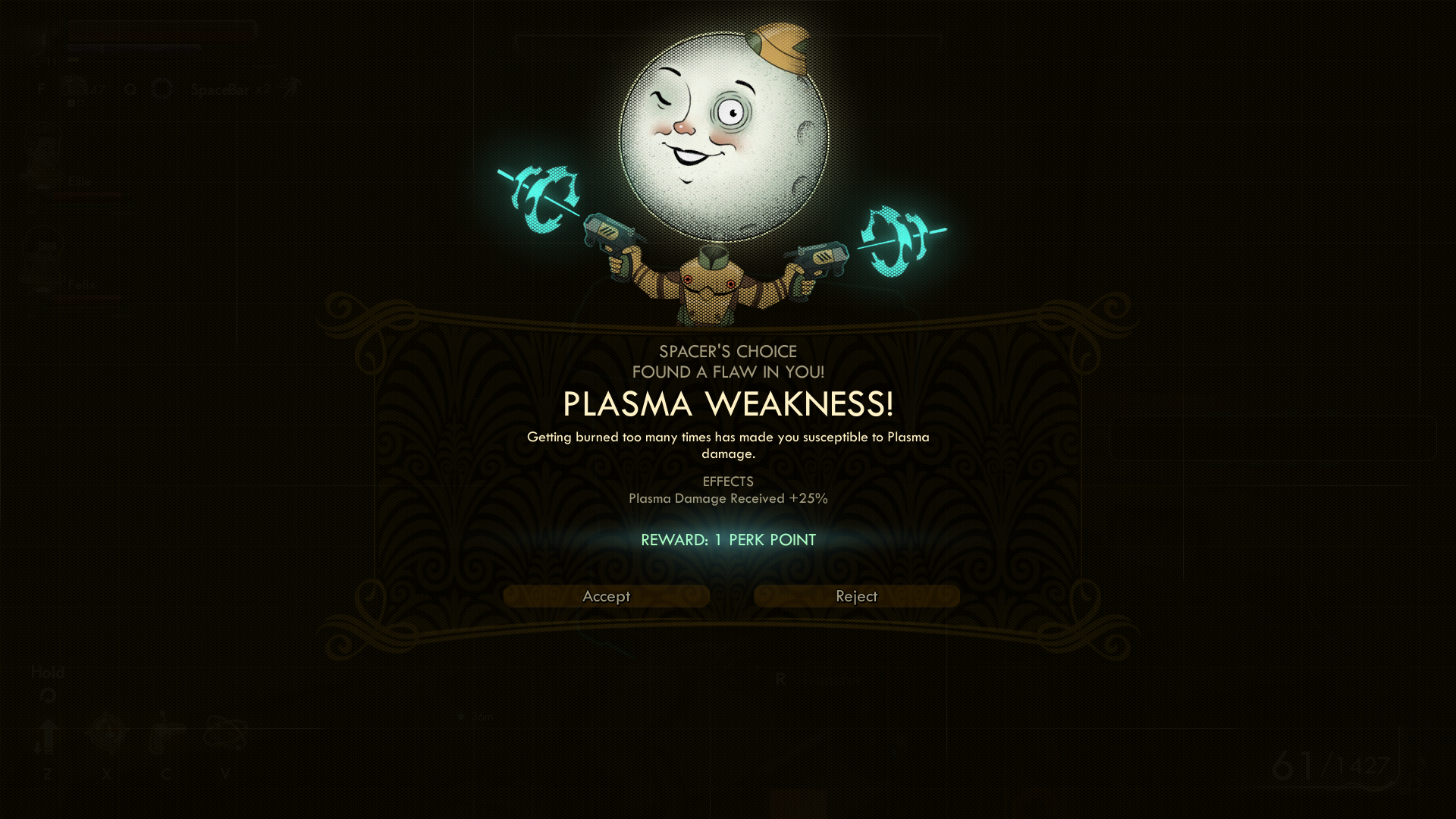 I like the idea of flaws, but the perks aren’t worth the debuffs.

For me, the charm of Fallout is the world more than the story, and the same can be said here. The story follows a quest to save the colonies, though who you trust to save it is up to you. The world and characters, on the other hand, are much more interesting. The corporate-ran future this game presents is believable, and I love the various settings and factions this game explores. Also, the writing in this game is great, as for I related to the dialogue options in this game more than others and the humor hit more than missed. Unfortunately, I also don’t think this setting is particularly unique or new. Fallout is a window into what things would be like if the 1950's idea of the future came to life, which I think is a rather unexplored concept. This game, on the other hand, looks at a world ran by corporations, which feels stale at this point. It’s definitely a well-crafted world, but like the rest of the game, feels too reliant on ideas and mechanics presented before.

A ship needs a crew, which is where companions come into play. There are six different companions to find throughout the game, each offering different skill sets and companion quests. Companions are one of the best aspects of the game, and for a few reasons. They are all highly customizable, and you can even customize their behaviors like how aggressive they are or whether they prefer guns or melee weapons. They have small skill trees for character specs, abilities for combat, and even different dialogue and conversations for different companion pairings. The best thing they have, though, are companion quests, which are long quest chains that I found more exciting than most of the side quests. The companions are the most interesting characters in the game, and I enjoyed every minute with them.

Combat is a major weakness of the Fallout games. In my mind, V.A.T.S., the time-pausing combat mechanic, solely exists to hide the clunky controls. Fortunately, I can say the combat in this game is much better; and by much better, I mean functional. This game even has their own answer to V.A.T.S. known as Tactical Time Dilation, but this one still requires control over combat. In a vacuum, however, I found the combat to be rather basic and extremely easy. I did enjoy some of the combat’s simplicities like only having a few ammo types, and there are things I like with the combat like adding weapon modifications, but overall it is too familiar to other open-world shooters. The bigger issue with combat is how easy it is, as for fights were rarely a struggle. I even bumped up the difficulty, but I still found it easy to slaughter my way through packs of enemies. When it comes to dealing with enemies, I actually found stealth to be much more interesting. This game has a holographic shroud, which will disguise you in restricted areas. The shroud depletes as you move, and hitting zero means losing the shield. If you get caught, however, you can use your dialogue skill checks to regain the shroud, though that can only be done so many times. It’s a neat way to handle stealth that makes sense for a game like this, but one I didn’t utilize as much as I would’ve liked to. Combat in this game is functional, which is fine, but its lack of difficulty and basic nature makes it forgettable. 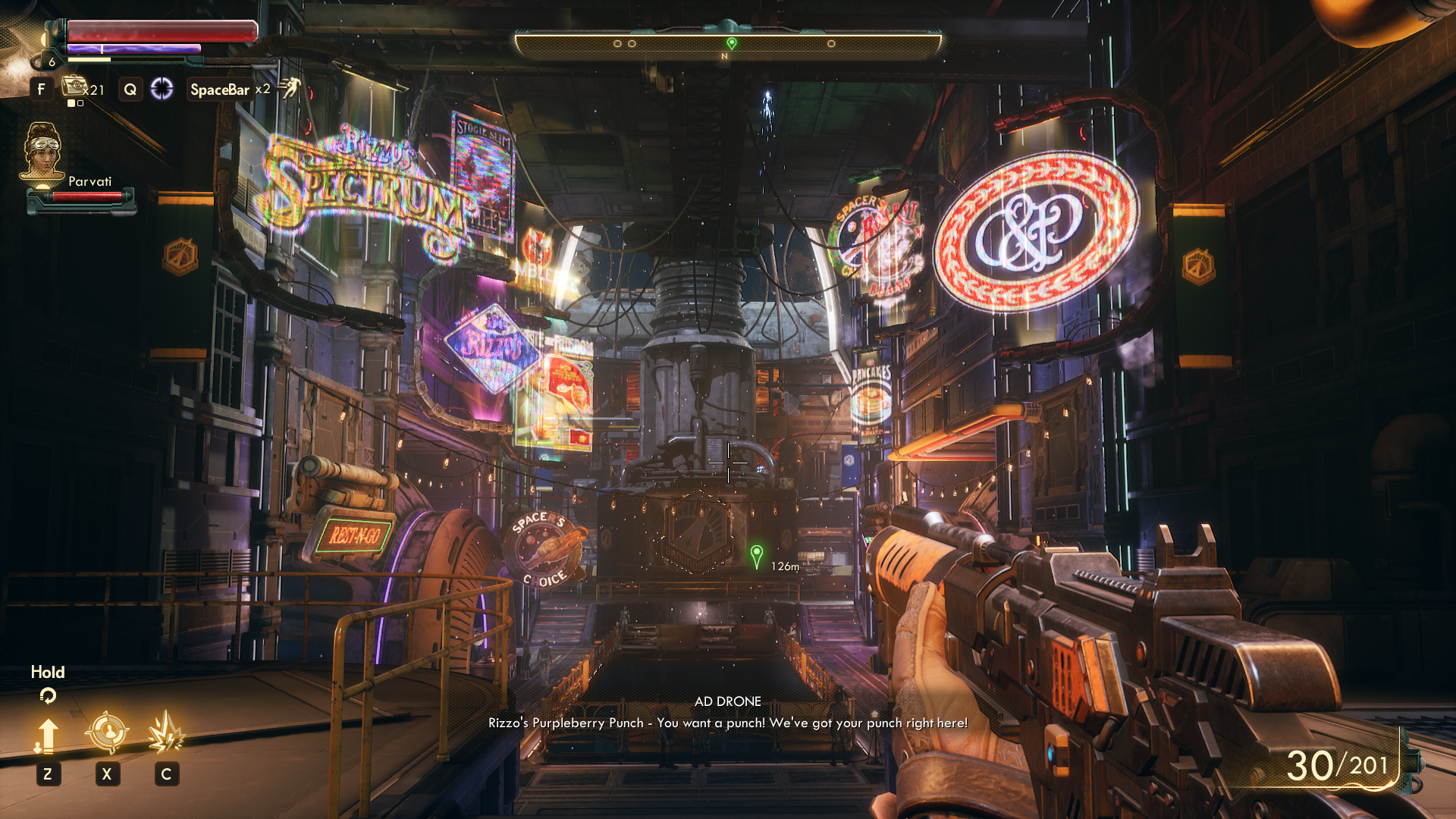 At times, this game can certainly be a looker.

One last thing to talk about are some of the neat smaller mechanics that can be found in this game. They didn’t impact my time with this game tremendously, but they were small items that bolstered the fact that this game doesn’t feel like it is wasting my time. Things like removing lockpicking and hacking minigames, the ability to break down weapons from the looting screen, having multiple small maps instead of one large map, and an injector that can use multiple items at once all felt like they were trying to keep the core focus on what matters in the game; and in this current time of games trying to squeeze dozens or even hundreds of hours out of players, having a short-but-sweet experience is one I appreciate.

The Outer Worlds takes the good elements of Fallout and puts it into a functional game. That should be enough to call it a day, but I found a lot of the magic of the Fallout series to be missing. The game relies too heavily on mechanics and concepts explored in other games, and as a result felt uninspired and too familiar. This game is still a solid experience worth playing (especially considering how short the game can be), but it’s also an experience I wish I loved more.