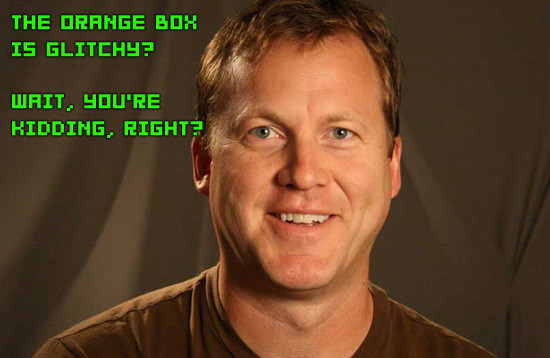 For those unawares, Mystery Science Theater 3000 was-... Actually, scratch that. Anyone who doesn't know what MST3K is can die in a fire. Okay, perhaps that's a bit harsh. Two robots and a guy watch bad movies, funny happens. That's all you need to know. Now, go watch it on YouTube or Google. Anyway, since the show's cancellation, former MST3K host Mike Nelson has continued making fun of movies at Rifftrax.com. He also blogs there. And so our story begins...

Among his vast multitude of projects, Mike writes for Home Theater Magazine, so it makes sense that he'd want to check out Blu-Ray firsthand. So, naturally, he picked up a PSTriple. Now, those of you who are hardcore MSTies will remember that Mike once was an almighty god at Doom, way back in the day when people actually wanted to be almighty gods at Doom. So, being the nerd that I am, I was giddy to hear that Mike is once again indulging in a little FPS fun with Resistance and Call of Duty 4. Basically, my point is that it's just awesome to see Mike talking about video games, and especially in what seems to be a positive tone. MST3K and video games. Ah, heaven.

If this is relevant to your interests, check out the short blog post here, where he talks mostly about Pain and its depth of gameplay. Because Pain is really deep. Really. Now I just need to get him into The Orange Box.

[Also, shameless self-promotion.]
#Community
Login to vote this up!