Luigi's Mansion 3 is probably one of the most overlooked titles when it was announced for the Nintendo Switch. Many could link that back to how many weren't too impressed with Luigi's Mansion 2, or in other countries, known as Dark Moon. The first installment from the olden times of GameCube was a smash hit and a good launch title for one of Nintendo's best home consoles so when the second one came and people were upset, it's pretty easy to understand why people were worried for Luigi's Mansion 3. Luckily though, the third installment of the famous series was probably one of the best looking and playing games of this year and on the Switch.

At the start, Mario, Peach, some Toads, Luigi and Polterpup are all heading to a hotel that was randomly awarded to Luigi. Now, for some dumb-fuck reason, Luigi hasn't learned from his previous mistakes and heads over to the hotel. The game looks amazing, especially Luigi whos facial animations always change from time to time; whether it's Luigi looking at a suspicious hotel worker or him just reacting to his friends walking around the ominous building, Luigi's facial animations are incredible! After the initial start of the game, you're sent to Luigi's room where everything seems normal.

Now, Luigi obviously is the biggest fucking scaredy-cat in any Mario related piece of media because Mario's fucking everywhere now, he's probably even fucking in a fucking pirate ship sunk to the bottom of Davey Jones locker for all we know, just because of how popular he is so it's no surprise that the game takes a big turn when you transition from night to day. Everything, including the previous items and objects you could interact with, has now been jammed with jack-in-the-boxes and scary clown masks that make Luigi shit his pants. It's around this time when you get the Poltergust G-00 which is probably the best Polyurgust in all of Luigi Mansion history. This is probably because of the fact that you can literally do everything that the previous ones with the added brutality of new moves like the slam.

The aim of Luigi's Mansion is to save Mario, the Toads, and Princess Peach from King Boo and the manager of the hotel by getting buttons for the elevator that can go up or down. There are around seventeen floors I believe, each with a different style. In one, you're going up a tree, infested with plants and vegetables and in another, you're in a disco, fighting a DJ with ghost break-dancers. The idea of being in a hotel instead of a house or standard mansion, adds variety to each floor so none feel samey or recognizable to another because they're all different in their own way. 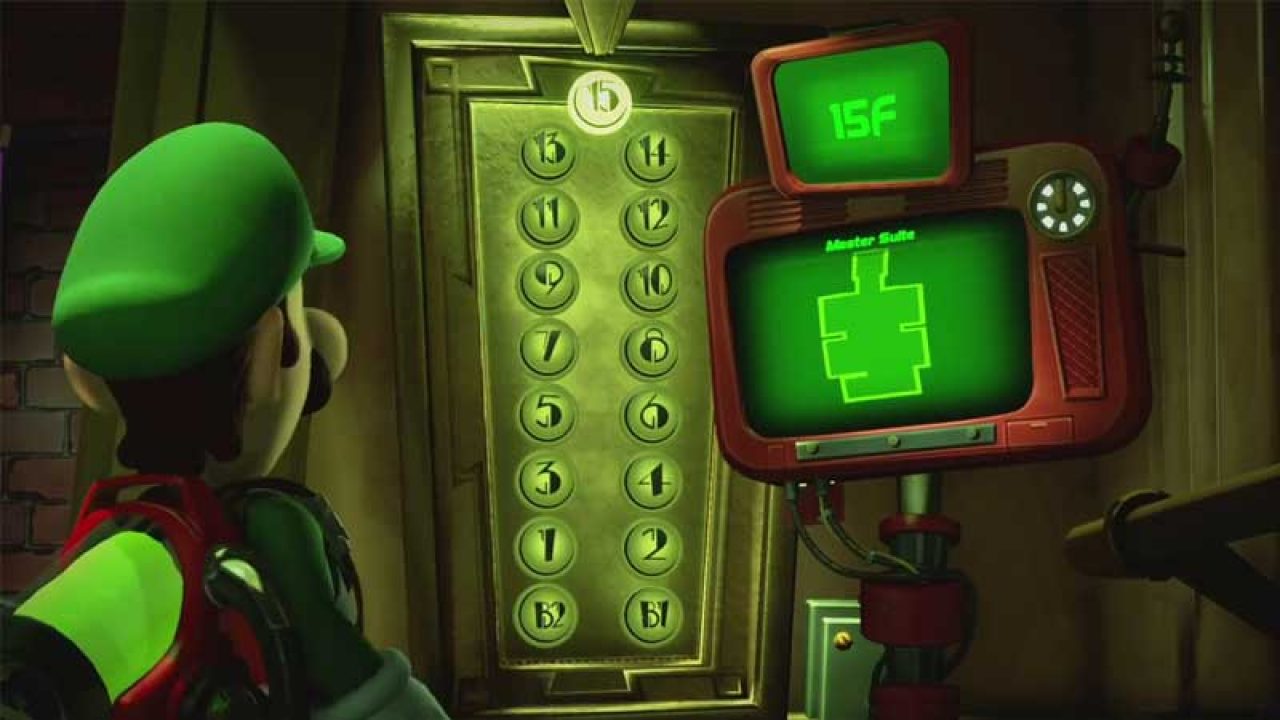 The game is a smooth sail until you hit annoying things like boss fights where you have to use Luigi and Gooigi at once, backtracking through floors to get some stupid ass button from a stupid-ass ghost cat, mechanics that are really hard to pull off, etc. Speaking of Gooigi, I noticed I haven't even talked about him yet so I guess I should probably do that. Gooigi is Luigi's alter-ego thing that is basically a more mobile Luigi, just with less health and weakness to liquids like water. Gooigi is very interesting as when he's used. most of the time, it's in smart ways that don't change up the pacing or gameplay but when used badly, you can really notice it and it makes more things that are wrong with the game, more apparent. I'm quite confused about why the developers decided to map Gooigi to the right analog stick so you have to press it each time you want to use him and then press it twice to destroy him which can sometimes be a pain and not work.

In the end, Luigi's Mansion 3 is another knock-out on Nintendo Switch. With interesting characters, nice controls where I only found one or two hiccups and a bitter final boss yet satisfying final ending, that it's hard to nor recommend this game to anyone who owns a Switch or will in the future.

Note- I did not cover all things that I wanted to in this review so maybe in the future, I'll do an extended review.