Traveller In Playtime - Tales of the Abyss

Tales of the Abyss is a JRPG developed and published by Namco/Namco Bandai for the PS2 in 2005-2006 and 3DS in 2011-2012. The teenager Luke fon Fabre lives out his days restrained to the manor of his father, the brother of the king of Kimlasca-Lanvaldear. One day, while Luke's teacher Van is visiting, a woman named Tear appears and intends to kill him. Luke intervenes, and the fonon particles in their bodies react violently and teleport the both of them to the neighbouring kingdom of Malkuth. They soon realize that the two kingdomes are nearing a war and set out to prevent it from happening. 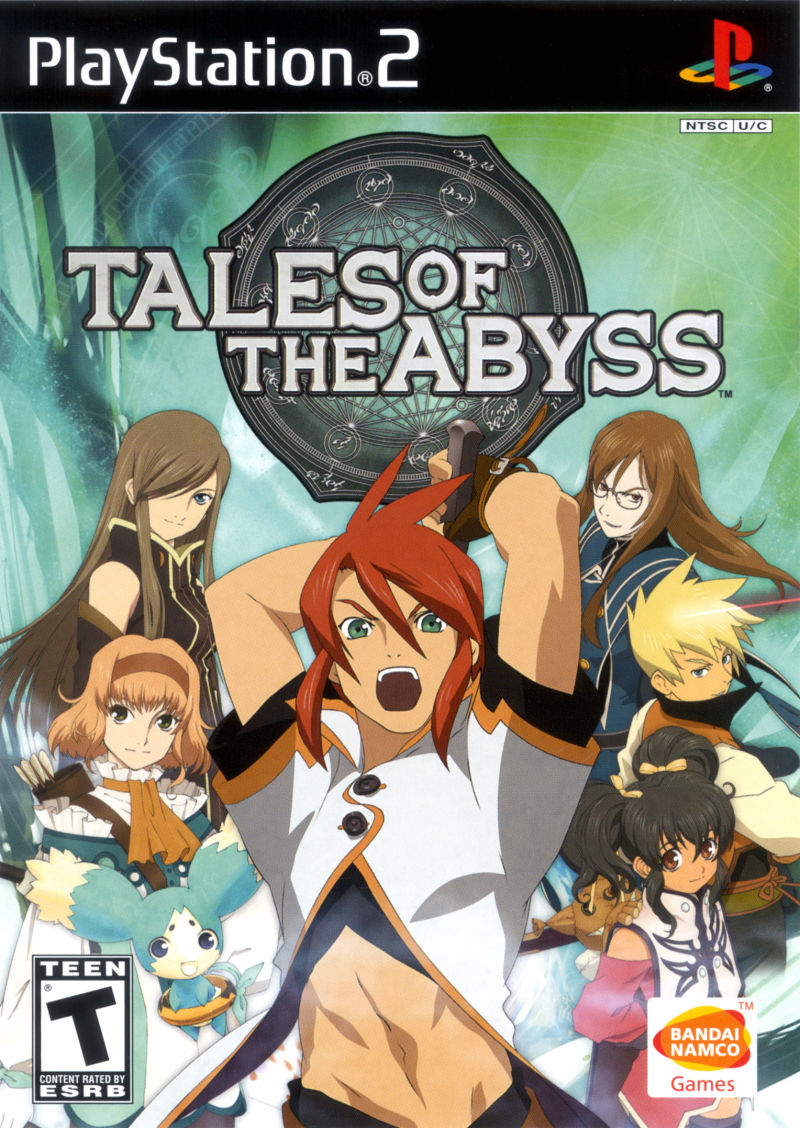 Who Are You, Luke fon Fabre?

Tales of the Abyss embodies two of my favorite themes, namely fate and identity. The world of Auldrant is governed by the Score, a massive prophecy that details the lives of every person living there. This has led people to become so tied to it that they can't live their lives without an annual reading of their fate. Our protagonis Luke then manages to deviate from his Score, proving that it's not absolute. This starts a series of events that forms groups of people that either double down on the Score, see it as a mere possibility or outright reject it.

That keeps the plot going, but what's really well-explored is the second theme of identity. And no one exemplifies it better than Luke himself. Imagine a character about twice as bratty and childish as Tidus in FFX, that's Luke. With his attitude, it's just barely possible to put up with him. But, and this is an important "but", he doesn't stay that way. As his understanding of the world widens (along with the player) and he realizes what he is capable of, he essentially kicks himself in the face and says: "I can do better than this! I have to!"

After that point, he ruminates over his purpose in life, tries to do everything he can to save the world and even questions if his old life is worth keeping in any form. It's a simple idea executed very well. With the game being as long as it is, Luke gets ample opportunity to think about the latest plot development, especially in the numerous (though sadly unvoiced) skits in the game.

The rest of the party also struggle with their identities in some way. They have either changed drastically before the start of the game but keep running into their past, or they're trying to put up a facade in order to fool themselves and others. The particulars of each party member is a bit more complex than that, but it'd rather not spoil those plot developments. Suffice to say, everyone in the party harbors secrets, even if they don't know it themselves. 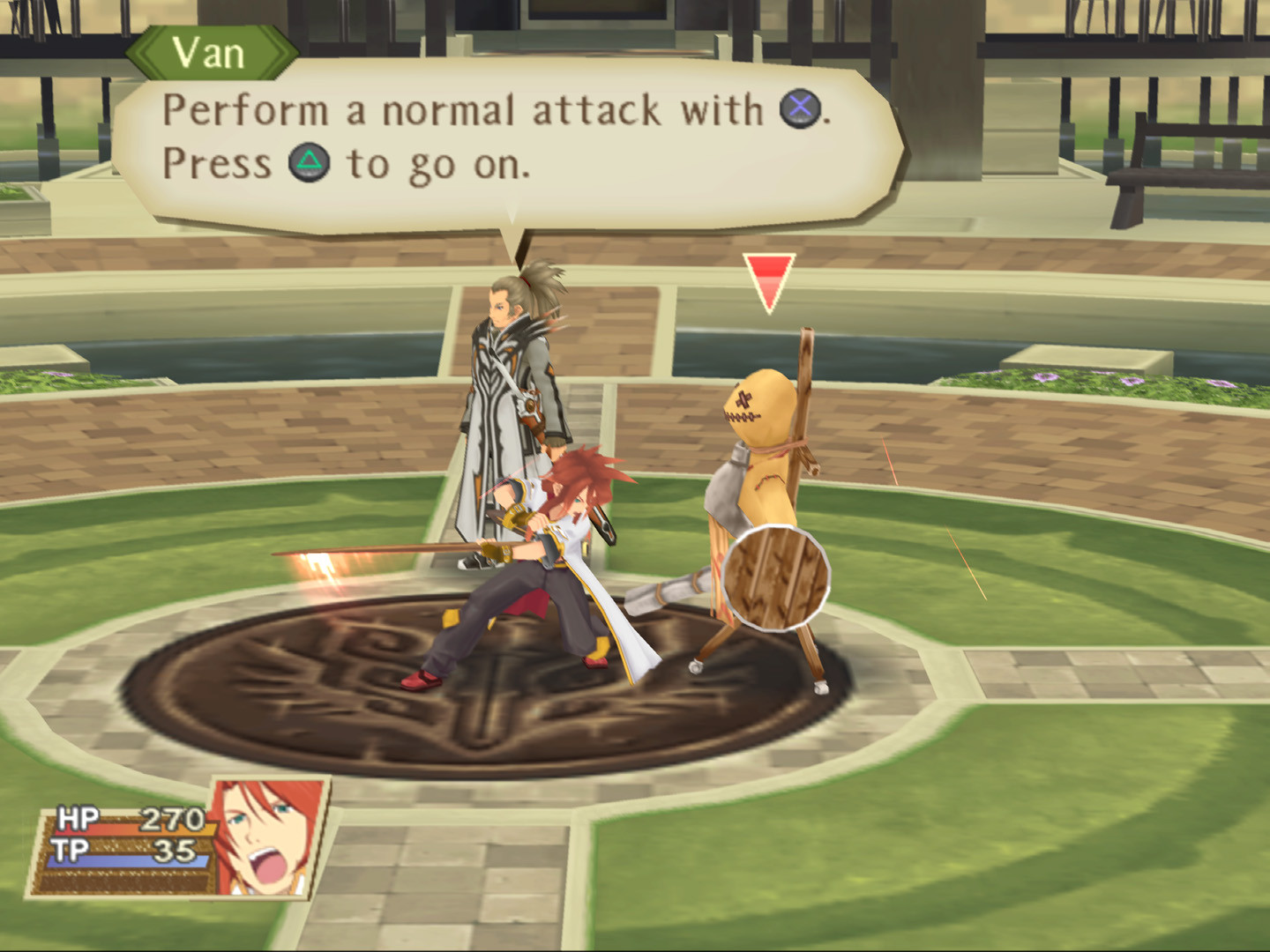 It makes for a really good dynamic whenever someone's identity gets called into question, as it makes people question eachother and the nature of the world they live in. It builds the bonds between people who could easily have become enemies, which is a really good way to handle a party. Frankly, I can't really point to any weak part of the narrative, it's that good.

Yeah, I could just leave it at that headline and call it a day. It's so nice to see a combat system improve itself so between games. The core of linear battles in a 3D arena remains, but all the weak parts of Symphonia's combat has been adressed. The Overlimit is no longer random and governs each character's Mystic Arte super move, so with just that, you're afforded so much more control over combat. But that's not the end of it!

You are also given the ability to Free Run, which allows for actual 3D movement for those times where you want to run away from an enemy or simply need to change your angle of attack a bit. Symphonia worked well enough without this feature, but it just makes the overall experience more pleasant her in Abyss. Helping things even more is that all of the melée characters are useful, so switching between them for variety doesn't hamper your efficiency. The magic users are still best left to the AI, but 3 good playable characters is more than a lot of the games in the series can offer.

The proper new addition to the combat is called the Field of Fonons system. Certain combat artes (mostly magic) leave behind an elemental circle on the battlefield. If those circles get hit by the same element again (or if a strong spell was used once), then the fonon field becomes active. When it's active, anyone within the field (your party or the enemy) can spend it in order to modify an arte to that element and power it up.

Early on, this is very rare, but once you have access to more spells, it's best to set up your skills so that you can use every sort of field in order to constantly use modified artes. On the whole, it's not an earth-shattering addition, but it makes combat just a bit more chaotic, which keeps thing from becoming too stale. Though I will admit that it sort of locks the party's black mage Jade into your party formation since he is by far the best way to shower the battlefield in fonon fields.

Slot Your Chambers And Check Your Capacity

In lieu of Symphonia's bad arte aquisition system, Abyss simplifies things by making most artes available through straight leveling and a few quests. As such, you get what artes you need when you need them. But to give the player something to fiddle with, you instead have two other systems to play around with to customize your characters.

The first is called Fon Slot Chambers, or just FSC, which lets you customize your combat artes by slotting chambers of differing types into them. Once a chamber is slotted in, it'll have a low chance of activating it's effect until you use that arte a bunch and raise the chance to 100%. Grinding up the proc chance doesn't take long, but it doesn't feel very necessary, as the effects aren't that noticeable. The most common chambers increase damage and lower TP consumption, but I could rarely tell if they made a major difference. The rarest and most interesting chamber allows for for artes to use inactive fonon fields, which is how you set up the game's most interesting combos (by using one arte to leave a small inactive field and then cashing it in with the next arte in the combo). But as I said, those chambers are rare and the game isn't hard enough to require complex combos. The whole system feels like it was held back in order to make the game less demanding.

The other system to fiddle with are the Capacity Cores and Additional Skills. Capacity Cores are items you equip to a character in order to influence their stat gain upon leveling. They always follow their normal leveling curve, but on top of that you get to decide in what stats they should get extra points. Following the character's archetype is usually for the best, but you can get some interesting results by hyperfocusing on certain stats like speed or defence.

Once you gain enough points from Capacity Cores, you will earn Additional Skills depending on what stats the character has gained through Capacity Cores. Overall, it's better implemented than the Ex gem system in Symphonia, but that's mostly because learning specific Additional Skills isn't that important. Aside from the ever important ability to use items on other party members (which is werdly locked behind 30 points of physical attack), I don't find the Additional Skills that useful, except maybe the lategame ones. But to even get those, you need to know what stats are required to unlock them, which the game offers absolutely no hints for.

As you can tell, both of these systems are interesting and flawed, but ultimately harmless in the grand scheme of things. No matter what, you still get your essential combat artes, so you can't really screw yourself over, but unless you're willing to engage with these systems on a high level (with a guide or two in your lap), you won't really get much out of fiddling with them. I love secondary leveling and customization systems like these, but they need to tie into the combat properly to be worthwhile.

The world you get to explore is pretty standard. The plot takes you through a bunch of dungeons with some decent puzzles and environments to enjoy. Though strangely enough, I found that I spent a lot of time going between cities for cutscenes instead of just going to new dungeons. It's a pretty valid approach, since every visit happens for a good reason and you even get a telportation option once most of the world has been explored.

There is a decent amount of side content, but just like in Symphonia, it's pretty difficult to actually complete, since a lot of it is pretty obtuse. Quests are either time-sensitive or very bad at offering clues. Not to mention that there isn't a quest log, so keeping track of everything is difficult. And just like the secondary systems I talked about beforehand, you don't really get anything worthwhile out of it, save for a few combat skills, a bit of extra story and a bonus boss. So you can totally ignore all the side content and barely feel like you missed anything. That's better than it being noticeably disadvantageous to screw up side quests, but I'd prefer if the side stuff was harder to miss and made more of a difference, both in gameplay and as a way of exploring the world.