The sign of a great game is if it has left an impact on you. Whether it be through the choices you made going through it, the story it tells, or simply via a unique idea, the greatest games are the ones that are so brilliant they can change your worldview. Throughout my life, while others were doing constructive things, like going outside, getting exercise, and having these weird things I’ve heard described as “social lives” I was busy playing video games, and each one has had an impact on me. Some have challenged the way I see the world, or what it’s like to walk in someone else’s shoes. While others have taught me that maybe I shouldn’t waste all my money on terrible games just because they’re having a 10% off flash sale. Yet despite all the great stories I’ve seen spending countless hours on a never-ending list of games, there has only been one that has ever impacted the single most important thing in my life, my faith. That game is the Talos Principle. That’s right, the weird game whose cover art is a robot stroking a cat, challenged my view on the worlds most popular and significant religion of all time. This is the ultimate lesson on why you should never judge a book by its cover 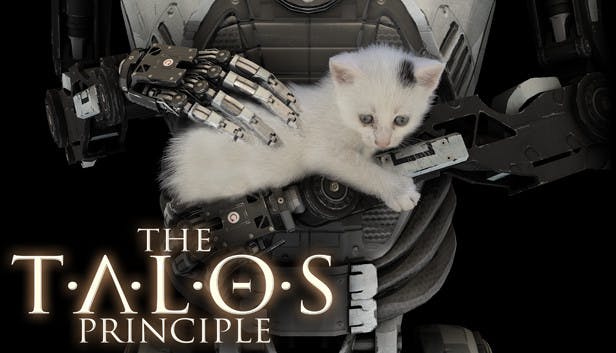 Dramatic backstory time. I am a Christian. I always have been a Christian, and I would bet a good amount of money that I’m not going to stop being one any time soon. We’re not talking a low-level Christian whose just picked up a bible once or twice, no I’m one of those Mega Uber level Christians. The one you are more likely to see backflip of the Empire State Building than swear, the one who dives for cover when anything remotely sexual appears, and worst of all, the one that’s always trying to think of new ways to invite you to church. As you can see, I’m really fun at parties. So, it goes without saying that little me, aeons ago, went to Sunday school to learn about all the different stories from the bible, including the one that started them all, Adam and Eve. In case the person reading this is some form of alien and hasn’t heard it (hi by the way, welcome to earth, please enjoy your stay) here’s a quick refresher. God, at some point in his infinite existence, decides he wants to try his hand at arts and crafts and goes ahead and creates the entire freaking universe. In the process he also makes Adam and Eve and gives them a whole garden, called Eden, to run around in. They can do anything they want so long as they don’t eat from the special apple tree in the centre of the garden. Adam and Eve then immediately got peckish, decided they wanted to try making the worlds first fruit salad, ate the apple, and their goes the neighbourhood. The important thing to know is that Adam and Eve are always seen as the bad guys, dooming the world thanks to their curiosity, lack of restraint, and disregard of God’s words. It is also important to know that every little boy and girl who hears this storey immediately thinks “well I’d never do that! Only a bad person would do that, we would never do that! At least not for a boring old apple”. Enter stage right, The Talos Principle 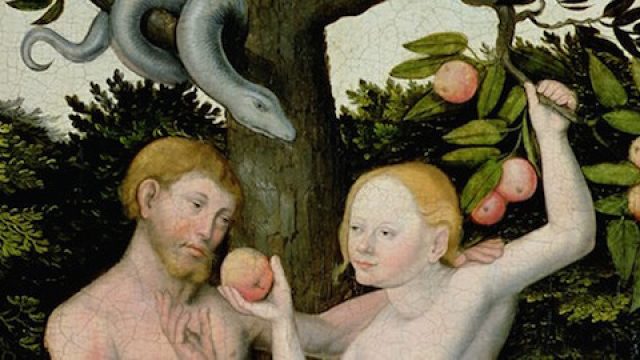 The Talos Principle remains one of the deepest, most thought-provoking games about trying to shine laser beams into little holes I’ve ever played. The game's story is so intriguing, and so simply introduces you to some of the most complicated questions someone can face, that it’s brilliant puzzles which rival Portal, suddenly, in comparison, become as interesting as watching paint dry. In short, I came for the puzzles, I stayed to question my very humanity. It’s so good in fact that if you haven’t played it, I beg you to do so now, as I’m sadly going to start spoiling the entire game. You have been warned.

So, what’s this game got to do with the two people from the Bible that you can actually remember the names of, besides Jesus. Well from the moment the game boots up, the story starts in a very similar way to a very famous book. You wake up in a beautiful garden. a booming, but loving voice, tells you he is a god, you are his creation, and the entire garden was made just for you. You eventually discover there is only one caveat, do not ascend the ugly tower in the centre of the world. And just like Adam and Eve, I defied God. It was only when I was halfway up did it hit me that I had just committed the first sin of this world, I was just as bad as Adam and Eve. Don’t get me wrong, since I’m no longer 6, I always knew that if I was in Adam’s shoes, or lack thereof, I would eventually chomp down on that juicy fruit. In fact, just talking about it makes me want to have one. But when it came to the Talos Principle I offered no resistance what’s so ever! The moment the god that breathed me into creation had finished saying his one and only commandment I was already halfway up the steps to disobey him. And what excuse did I have?! I had a whole game world filled with elaborate puzzles for me to solve, in a beautiful vibrant environment, but instead, I chose to spend my time with the result of what happens when the someone shoves a load of cinderblocks into a rock tube and paints the whole thing extra grey. Meanwhile back in the Bible, it’s is at least alluded that Eve had spent a fair while in the Eden without being tempted, and only when the literal Devil himself came along, did she succumb to her temptations, and even then she somehow managed to resist Satan, the very embodiment of evil, at least for a couple of lines of dialogue. Yet Eve’s actions have meant that the church has attacked women for almost all of history, labelling them as temptresses and weak of character. Can you imagine what they would say about me?! I fell to temptation way faster and I’m the one who's spent 22 years in church to prepare me to fight against this stuff! My heresy, however, was not in vain To get the best ending, you need to turn from God and climb the tower to the very top. There you discover God is just a program, one designed to run an ever-evolving AI (you) through puzzle after puzzle until it is smart enough to think for itself and gain free will. After reaching the top of the tower, thus proving you have finally achieved free will, the programme shuts down, and the AI is uploaded into a physical body and becomes a real, walking, talking, robo-boy, no longer trapped in a programme, whose free to wander merrily through the world. It's kinda like Pinocchio, but with more robots and metaphysics. But the game's overall message is that your actions against "god", broke the cycle of puzzles so that you could escape the programme. You needed to sin, in order to save yourself. And most importantly, this was all part of the plan, It was the programmes very purpose. Now, the argument of if God put the opportunity to sin, be it in the form of an apple tree or a tower, so we can have free will is a question for another time. But the game taught me a valuable lesson about two of the most trodden on, unforgivable people in the bible. The lesson was stupidly simple, the first man and woman ever created, were human, and humans are fallible. Christians teach each other not to be like Adam and Eve, because they’re sin doomed all of mankind, but any other person would have done the same. The whole point of Christianity is to acknowledge that you have sinned, but Jesus died so you may be forgiven. So of course, Adam and Eve were going to sin, they were human! But just because they were the first ones to do it doesn’t mean they are worse than anyone else. Eve did a lot better than I could have done, and her days on earth could be counted on her fingers! In short, this game a robot, taught me the humanity of Adam and Eve.