Vodoo Vince is a 3D platformer developed by Beep Industries and published by Microsoft Game Studios on the Xbox in 2003-2004. In 2017, it received a remaster for PC and Xbox One. On a night like any other in New Orleans, the fifth-rate magician Kosmo the Inscrutable sends his henchmen to steal the magical zombie dust belonging to the vodoo magician Madam Charmaine. They succeed and even manage to kidnap Charmaine, but accidentally spill the zombie dust all around them, which warps reality to a comical degree and brings the titular Vince to life. After telepathic exchange with Charmaine, Vince sets out to track down Kosmo and save his master. 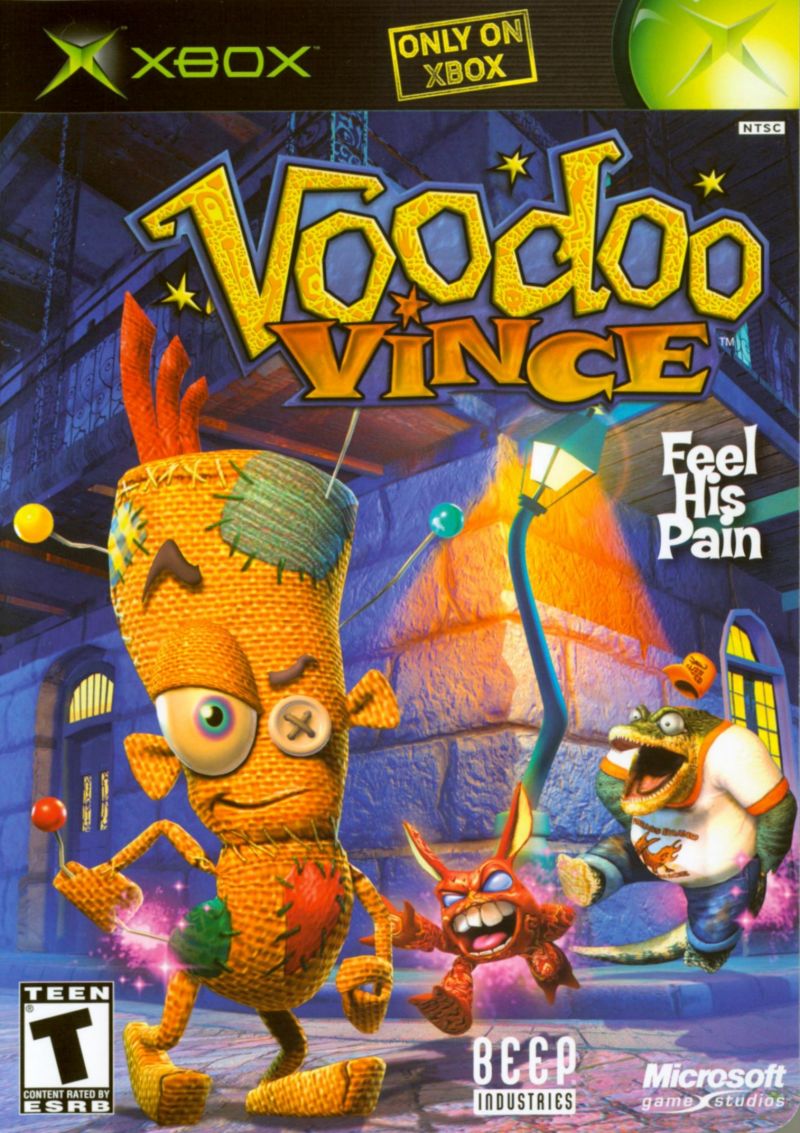 Being a standard 3d platformer of the era, the story of Vodoo Vince doesn't go further than its premise. All that matters is the start of the story and the ending, with everything inbetween being composed of whatever the development team managed to finish within their alloted development cycle.

As such, the game doesn't manage to build up proper tension for the final encounter with Kosmo. All the cutscenes with him aside from the first could be switched without affecting the overall experience a lot. That's a missed opportunity, but what about the actual writing during cutscenes?

I find it charming, but lacking a bit in direction. Vince is somewhat snarky whenever he runs up against a bizarre situation, though not overbearingly so. What saves him from being annoying is that whenever things go south, he panics and tries to bargain fruitlessly, which keeps him from feeling completely one-note. As such, he can be really funny.

Even so, there aren't a lot of really good gags. Or rather, most gags haven't been given enough attention to realize their full potential. The final gag of the game is conceptually great, but the lack of good build-up, animation quality and comedic timing lets it down. I doubt that there was time to really polish the cutscenes, but if you're aiming for a comedic game, you should really allocate enough resources for the comedy to stick. It says a lot about the writing when I laughed the hardest after finding a pizza in a box. It was funnier than it sounds, I swear.

Being a vodoo doll affords Vince some fancy abilities, but you'll mainly be using standard platforming abilites when controlling him. He can double-jump, hover for precision landings, punch and use his spin to both attack and float like in Jak & Daxter or Super Mario Galaxy. He controls well, but I did grow a bit tired of the hover ability after a while. Not only does it make the platforming very easy (except for whenever the game asks you to land on incredibly tiny platforms, at which point you really need it), but it also slows the game down, especially whenever you have to hover back down an area in order to get a trail of collectibles.

Halfway through the game, you also get a swinging ability that suffers from similar faults. Due to the game's origin on the Xbox, it's a bit starved for buttons, so you need to hold down the hover button in order to swing instead of doing a dive punch, which keeps the swinging slow unless you want to risk taking the express route into the nearest bottomless pit. I'd have been ok with them cutting the hover and the dive punch in order to make the game a bit faster and cut down on accidental deaths.

Vince's vodoo powers are used in two ways during combat. Against regular enemies, it's a screen clearer that lets Vince kill any regular enemy after putting himself through a varied set of comical deaths. After only a few upgrades to his stock of vodoo power, it becomes kind of silly just how much combat this allows you to skip. The combat is pretty on par for the genre (aside from some lategame elite enemies that basically require vodoo), so fighting things normally isn't exactly a death sentence. It just weirds me out that they'd make the regular combat mechanics moot just to stay with the theme of playing as a vodoo doll.

Now, for bosses, it gets more interesting, as they are immune to your regular powers. In order to harm them, you need to get to a specific environmental hazard and throw yourself into it in order to deal damage. Doing so usually involves some light puzzle-solving or some hectic platforming across the boss arena. This keeps things varied and somewhat challenging, which I appreciate, even if you never use your normal combat abilities to fight.

What's All This Jazz?

Being set in New Orleans and themed around vodoo, it should come as no surprise that the soundtrack is full of a bunch of goofy jazz tunes. They're pretty good and fit well with how animated the whole game world feels. It reminds me of Psychonauts and I swear the two games have a shared menu sound effect to boot.

Every level is relatively small and focuses on a single idea that the whole level revolves around. It could be a puzzle, a fetch quest or a giant structure to platform around. Sometimes, you must explore a hub-level in order to find sub-levels that lead you to your main objective in the hub-level. I was pleased to see that there were some pretty unique design ideas sprinkled across the levels, which goes to show that the genre isn't as creatively bankrupt as is commonly believed.

But with the levels being so focused on their gimmicks, the collectibles feel a bit thrown in, as they do not gate progress in the slightest and simply exist to give you new voddo animations and increase Vince's health and stock of vodoo power. That'd be fine, but there comes a point where you simply do not need more health or vodoo power, as combat quickly becomes a non-issue and bottomless pits will kill you instantly instead.

Not to mention that without the scanning bead you get halfway through, the bags of zombie dust the game wants you to find are hidden in some of the most evil places possible. It's like they made the levels first and then afterwards placed the collectibles in the furthest corners behind close to all of the objects that could conceivably hide a bag from view. It feels like what you'd do in a mod in order to make an old platformer feel fresh to people who have played the game to death already.

I like the skull pages used to upgrade Vince's vodoo stock more, as they are easier to find and unlock a small platforming challenge before you can claim your upgrade, which forces you to prove that you can get through the level quickly. It's a nice little way to cap off a level before moving on.