The Gamecube Controller, NOT a Jack of All Trades, But a Master of One

It all started with those damn shoulder buttons 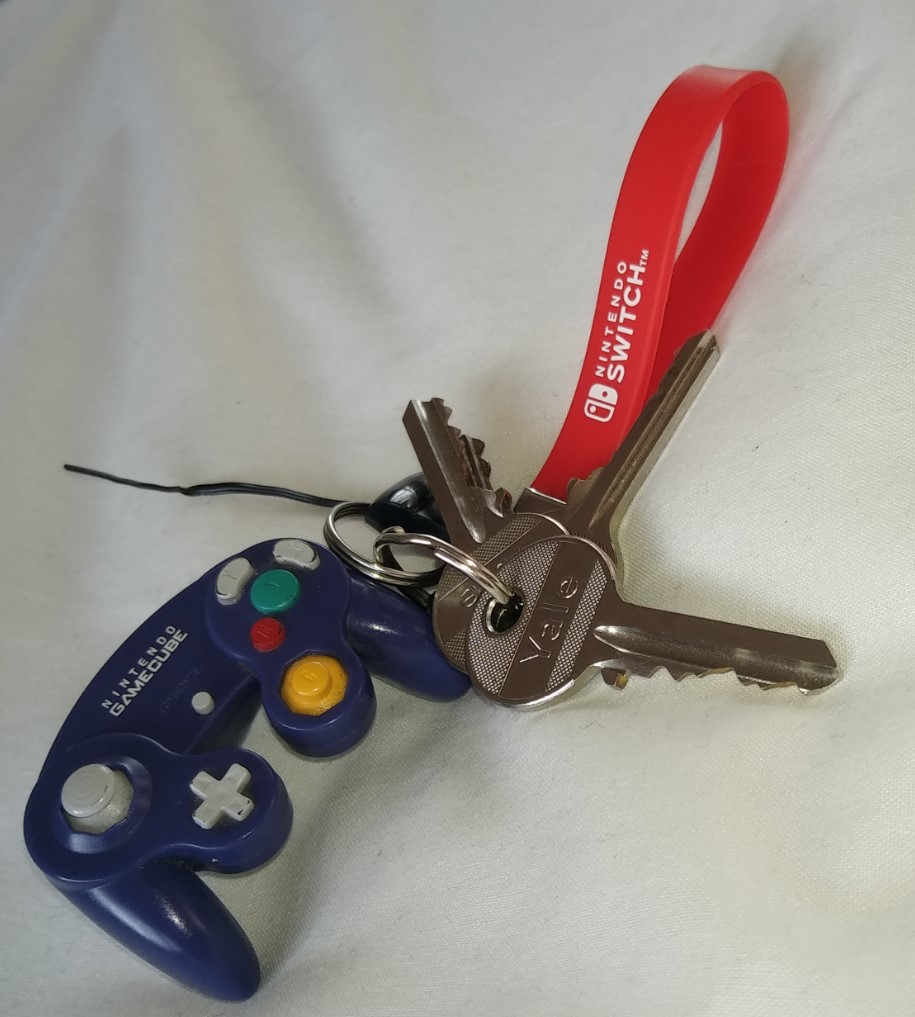 My Gamecube controller is my favourite controller. It’s comfortable, it’s aesthetically pleasing and the triggers click in an oh-so satisfying way. I know I’m not saying anything new here but I just wanted to get that out of the way before I discuss what I think it is that makes the thing so unique and some of the games that took advantage of that uniqueness. It is those games that I appreciate most because it is those games that keep the controller relevant today. Those games that, when played on a modern controller, feel like they lose some of the magic that made them sing back in the early noughts. These Jack-of-all-trades controllers will never be the master of the one thing the Gamecube controller got so tantalisingly right.

Now don’t get me wrong, there is nothing wrong with today’s controllers. The fact that pretty much all of the big console manufacturers have settled on the same design is a testament to its versatility. Nearly every game feels good with the ubiquitous diamond button layout and the fact that all controllers these days are so similar makes it easier to jump from console to console. It’s a win-win for everyone. 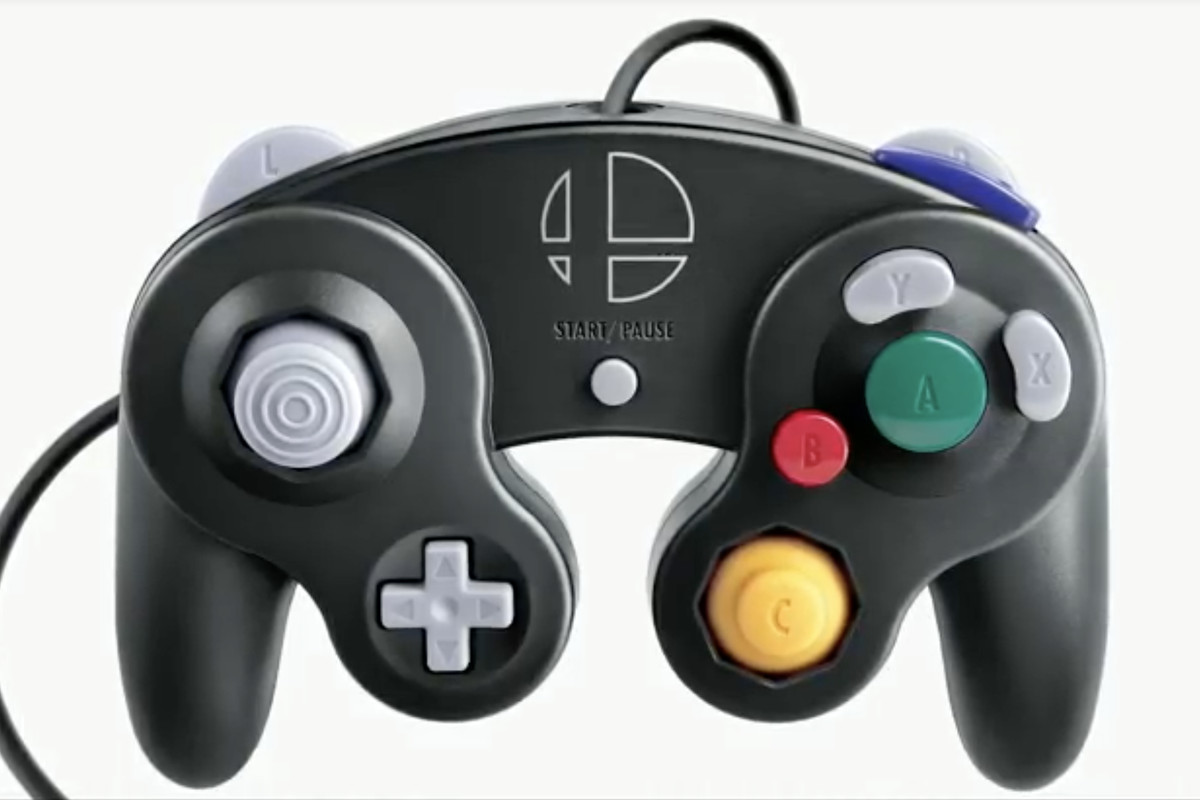 But take a look at the face buttons on a Gamecube controller. What’s the firsy thing you see? That’s right, the absolutely MASSIVE A button. It dominates almost 50% of the surface area. This is the main button for the controller and works just like the ‘confirm’ button on other controllers (like the ‘X’ button for Playstation, ‘A’ for XBOX, you get the picture.) Giving one button such huge priority over the other buttons may seem strange at first; shouldn’t all buttons be made equal? Doesn’t the layout confuse those who are more accustomed to a more standardised design? I guess it might, and this button layout is a little more complicated to get used to over the simplistic, elegant design of modern-day controllers. But when game creators build their games with this controller in mind, the controller allows them to craft experiences that other controllers are simply not capable of emulating.

It all comes back to that big A button.

On this controller all buttons are absolutely not made equal. The A button is the main button and the other buttons are there to compliment it. It means that whatever the main action in your game is going to be, it’s going to be mapped to that button. And that’s what I love about this controller. When it is utilised properly you thumb never has to leave the proximity of the A button. To accentuate this further, all the other buttons are within proximity of that main button, so you never have to relinquish control of your main ability while pressing any of the other buttons.

The two best examples of where this is absolutely pivotal to the gameplay experience are the Gamecube exclusive titles Viewtiful Joe* and F-Zero GX. 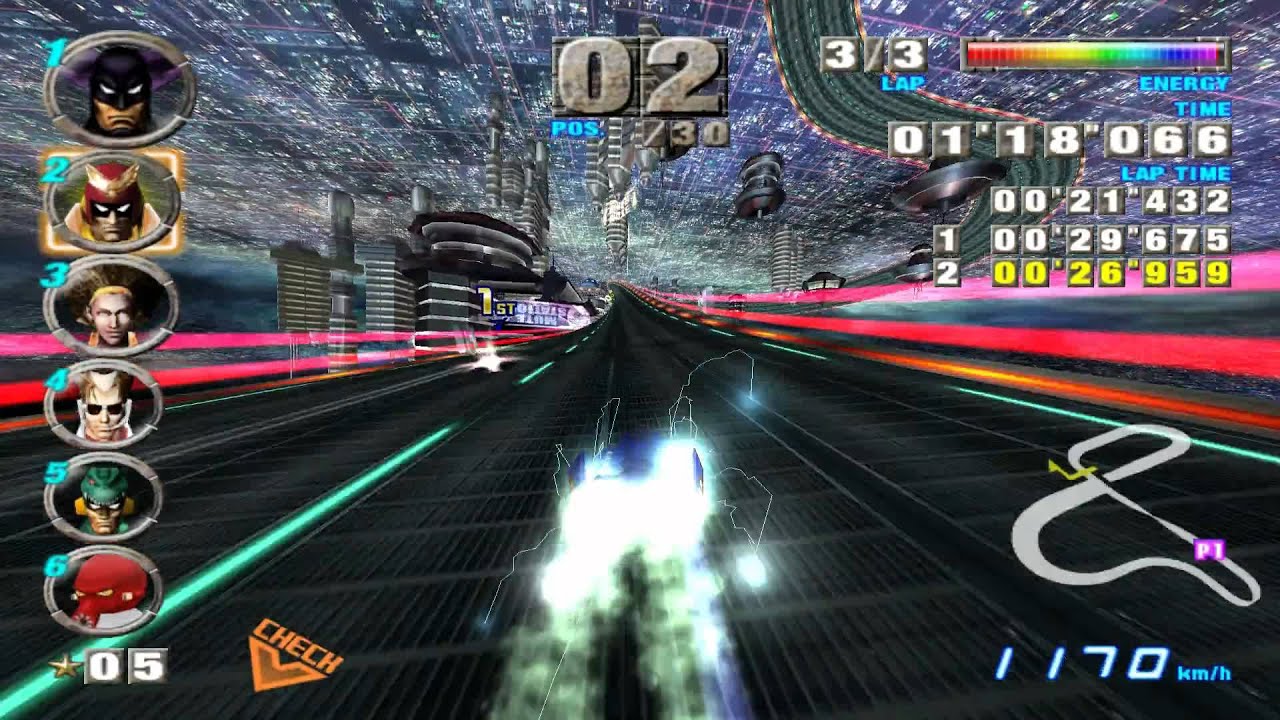 With F-Zero, the A button is used to accelerate (obviously). You ALWAYS want to be holing that button down. This is a racing game so of course you do. However, each button around the A button also has a function, the most important of which is probably the Y button, which is to use boost. 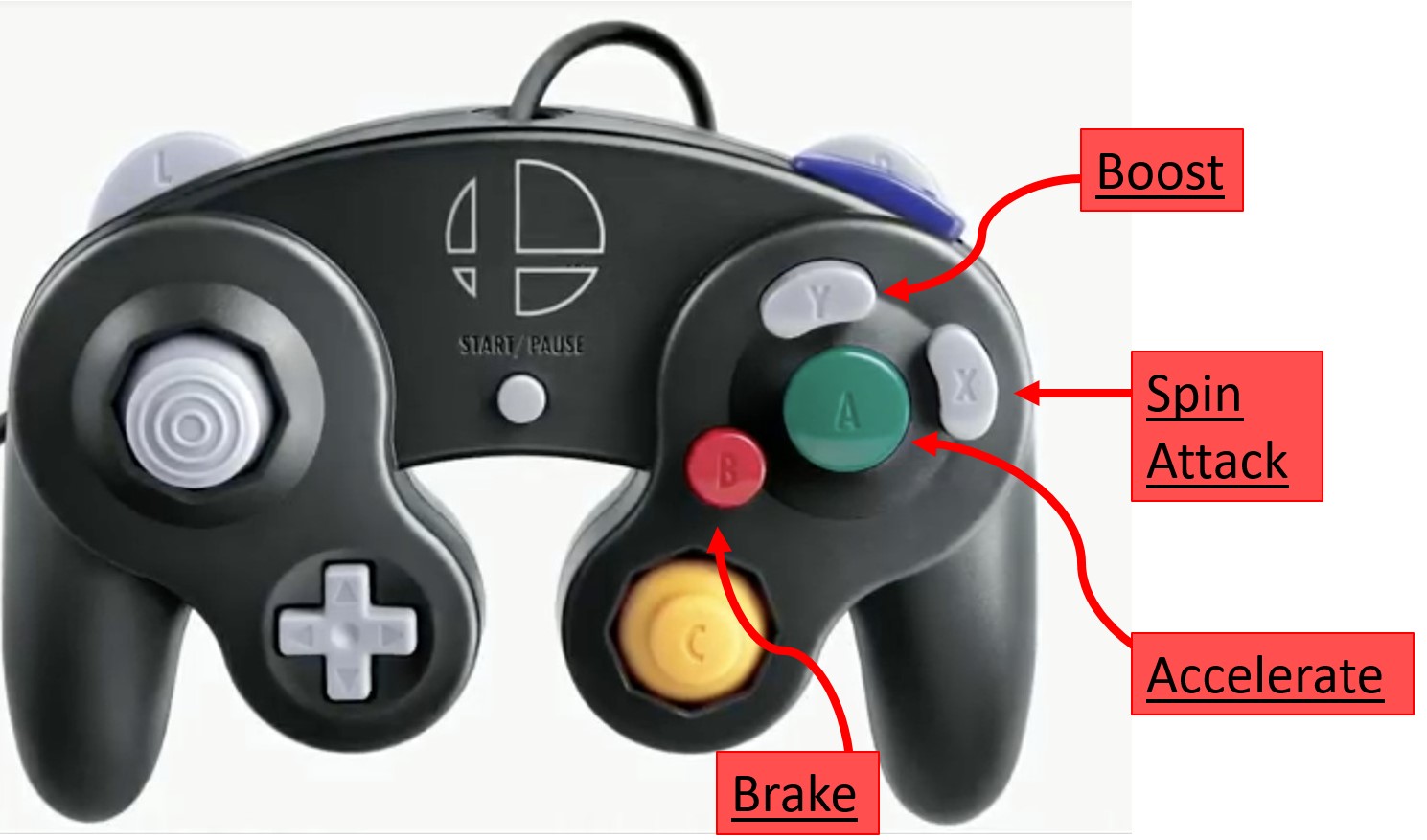 If we map this control scheme to a Playstation controller, all of a sudden that absolutely vital function is now out of reach from the main button (in the case, the triangle button and the ‘X’ button respectively.) You can’t press the triangle button and the X button at the same time and that means that, even if only for a split second, you’re taking your foot off the gas. In a racing game that moves this fast that is simply unacceptable. So what if we move the boost to the square button? Well now I can’t attack my opponents. Circle? Now I can’t break. No matter which way you play, you’re losing something and thus getting an inferior experience.

With Viewtiful Joe, the Jump button was the mapped to the A button and punch and kick to Y and X respectively. With these three buttons so close to each other it was so easy to unleash a ballet of cool, stylised violence upon your enemies. It just felt fantastic to uppercut someone, jump up with them, hammer on them a bit more then press down and X to land with a slow-mo Red Hot Kick that would devastate all around you with its field of damage. On Playstaion? It’s still doable, but it requires more finesse. You can’t just smudge your thumb over from one button to another and still pull off these sensational combos. Metroid Prime is another example of a game that feels better on the Gamceube controller. Mapping the Jump button to A? It would be blasphemous on an XBOX controller, surely the main button should be for shooting? But somehow it just works wonderfully. That little capsule B button is the perfect size to just hammer on when you’re trying to kill something and the missiles can be accessed whilst you’re jumping through the air. 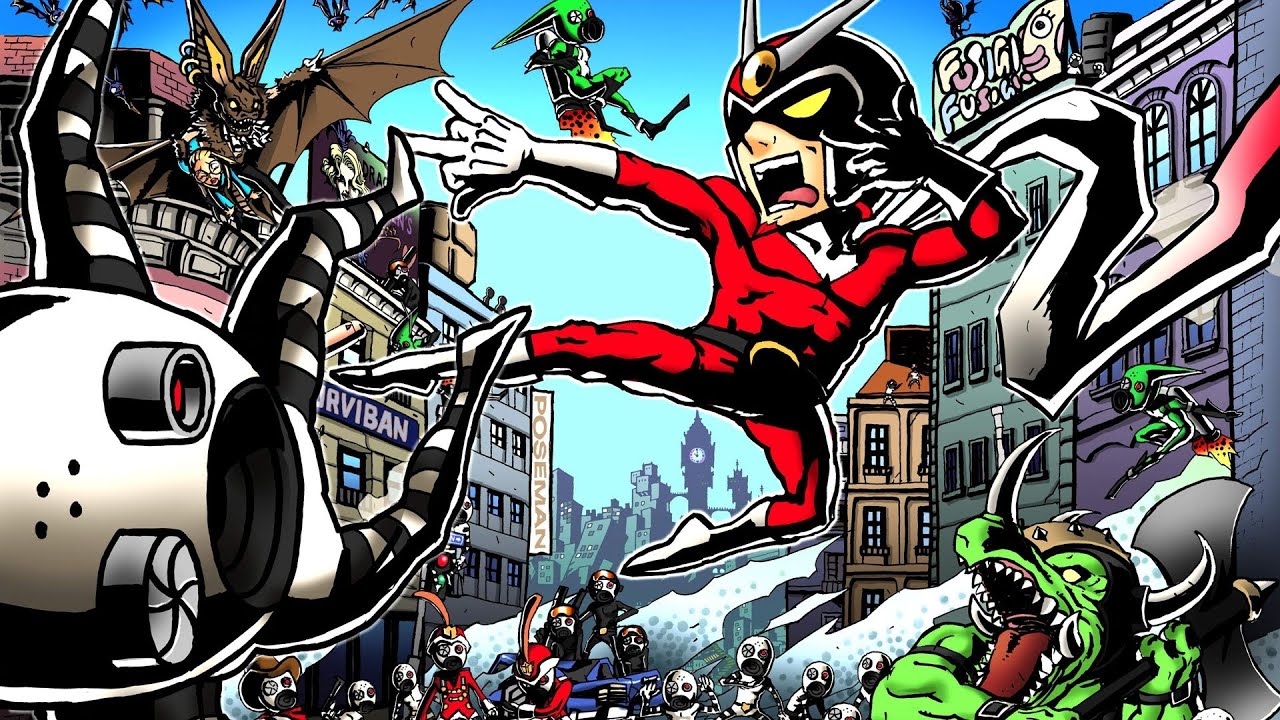 However, I will be the first to say that this control layout is not perfect. This control layout does not work for all games and when you look at the majority of games out there you begin to understand why the diamond layout is rightfully king. The easiest example that I can think of where the Gamecube controller not being fit for purpose is Tony Hawk’s and Soul Calibur 2. In Tony Hawk’s you need to be able to press multiple trick buttons at the same time. This is not an easy thing to do with the B button being so far away from Y and X. The same applies to Soul Calibur when performing grabs. The big A button limits the number of unique button combinations you can press at the same time and so for a game that requires you do exactly that, the controller comes up short.

So overall I do concede that the Gamecube controller layout is not the most easy to pick up and it’s not the most versatile. But when it works it’s bloody magic. In the end I’m just really glad the Gamecube controller is still sticking around. Nowadays we map complimentary actions to the shoulder buttons so that we can access them whilst pressing the main button. This does achieve the same effect but I do wish someone would make a game that just uses that big A button to its fullest potential once again. Thank God Smash bros has kept it relevant or else this controller would have already been consigned to the history books and we would have lost the one last controller that dared to do something different. I would love to see some more games take advantage of the unique layout of the Gamecube controller, even if it is just a new F-Zero (wink wink Nintendo!)

*Timed exclusive then, whatever.

PS. Smash Bros is best on a GC controller too (duh!)