MediEvil (1998) is an action-adventure title developed by SCE Cambridge Studio and published by Sony on the Playstation in 1998. It was later remade in 2005 and 2019 for the PSP and PS4, respectively. Following a humiliating defeat at the hands of the evil sorcerer Zarok, Sir Daniel Fortesque is entombed a hero until the sorcerer returns 100 years later and casts the kingdom of Gallowmere into eternal night and resurrects the dead for his army. But Dan gets caught up in the spell as well, and as a revived skeleton with one eye, he sets out to defeat Zarok and claim his place in the afterlife among the kingdom's champions. 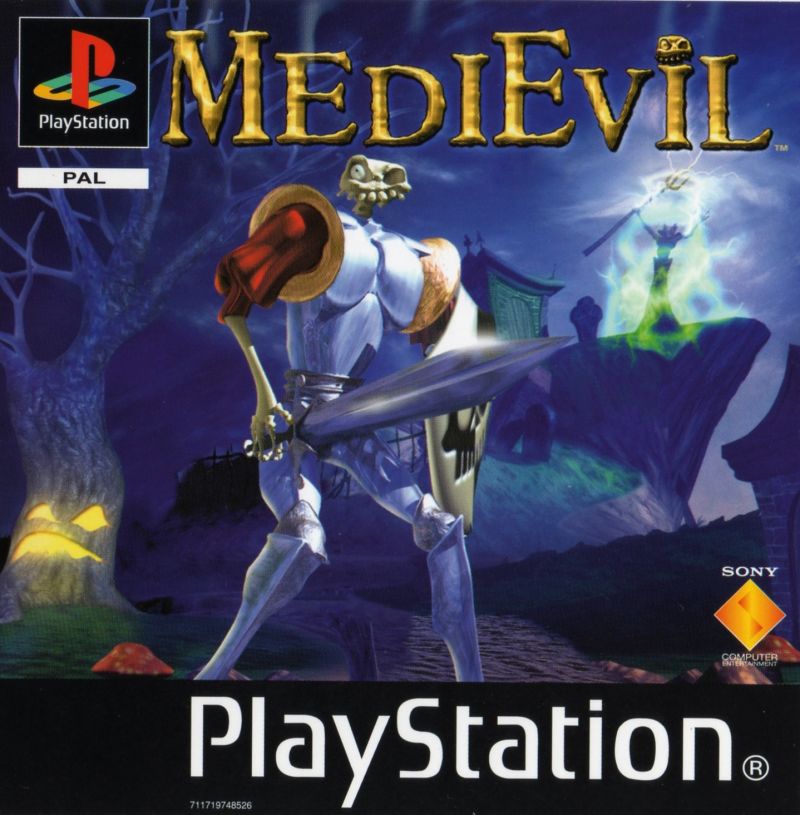 From Zero To Skeleton Hero

The story of MediEvil is carried almost exclusively by its setting, writing and setup. Dan himself is barely a character beyond his willingness to prove all his naysayers wrong in spite of all the unlucky things that come his way during the adventure. Since he lacks a jaw, he's more of a listener than a speaker, so the rest of the characters do most of the talking. Which works just fine, since the kingdom's bizarre residents are good enough to carry a scene or two, which is all the game asks of them. Even so, I find the whole thing to be rather satisfying as a story, as it is really nice to help poor Dan get some recognition. He's a working class hero and he deserves some respect, damnit.

But his quest is made worthwhile in no small part thanks to the work done to make the kingdom of Gallowmere (Read: quirky fantasy England) an interesting place to explore. It's sort of inbetween Arthurian legend and King's Quest, managing to be both enchanting and mysterious while remaining remarkably silly at times. The comedy isn't amazing, but it's never a bother either. If something doesn't make you laugh, it'll at least be silly and memorable.

I'm not a fan of the term hack-and-slash, but MediEvil fits the bill better than any other game I've played. Simply put, it's a braindead (heh) button-mashing experience that somehow manages to be enjoyable. I put a lot on that on the enemy and weapon variety, which is rather commendable.

Controlling Dan is a bit erratic, since he's either walking slowly or dashing at a full sprint, with nothing inbetween, even when using the analog sticks. This works well enough for combat scenarios, since the combat isn't more complicated than getting close enough to put the undead back in the ground and mashing X or holding square for an alternate charge attack. But whenever the game asks you to engage in platforming across instant-death pits, it's a different story. This doesn't happen often, but you're bound to lose at least a healthbar in the process, which can be painful if you haven't amassed a surplus of the refillable Life Bottles yet.

While there are some details to the combat system, namely a strafe mode and a shield system, it's not really a lot to go into. The strafe locks your forward momentum and slows down Dan severly, so it's basically useless. And the shields are really difficult to make use of unless you're trying to sprint past something.

No, what's really fun about the game is the weapon variety. As you fully complete levels by collecting the Chalice of Souls, you earn new weapons to play with. The game is structured in such a way that almost every new weapon is better than what you had before, so you can just switch and feel the results right away. There are arguments to be made about a few of the melée weapons, but the ranged weapons have a clear hierarchy. It's actually kind of ridiculous just how strong the ranged weapons get, even when the cost of ammo is put into consideration. But given the choice between difficult jank and easy jank, I'll take the latter any day.

I'm a big fan of the world created for the game. Thanks to the limitations of the era, levels are rather small (being between 10-20 minutes long, usually), so they aren't afforded much space beyond what Dan can run around in, but I think the game manages to turn that into a strength.

Almost every level has unique ideas to offer that aren't used enough to become stale. There are graveyards, farming fields, caves, castles and a fair few really inventive themes I'd rather leave as a surprise. And since the game is set in an eternal night, having certain sections just be cut off by pure darkness to save memory works out pretty well to create a spoopy atmosphere. Combine this with the moody soundtrack and you get a lovely little gothic adventure that doesn't overstay its welcome.