Hello, Darkness: To Wake from a Dream is a Nightmare 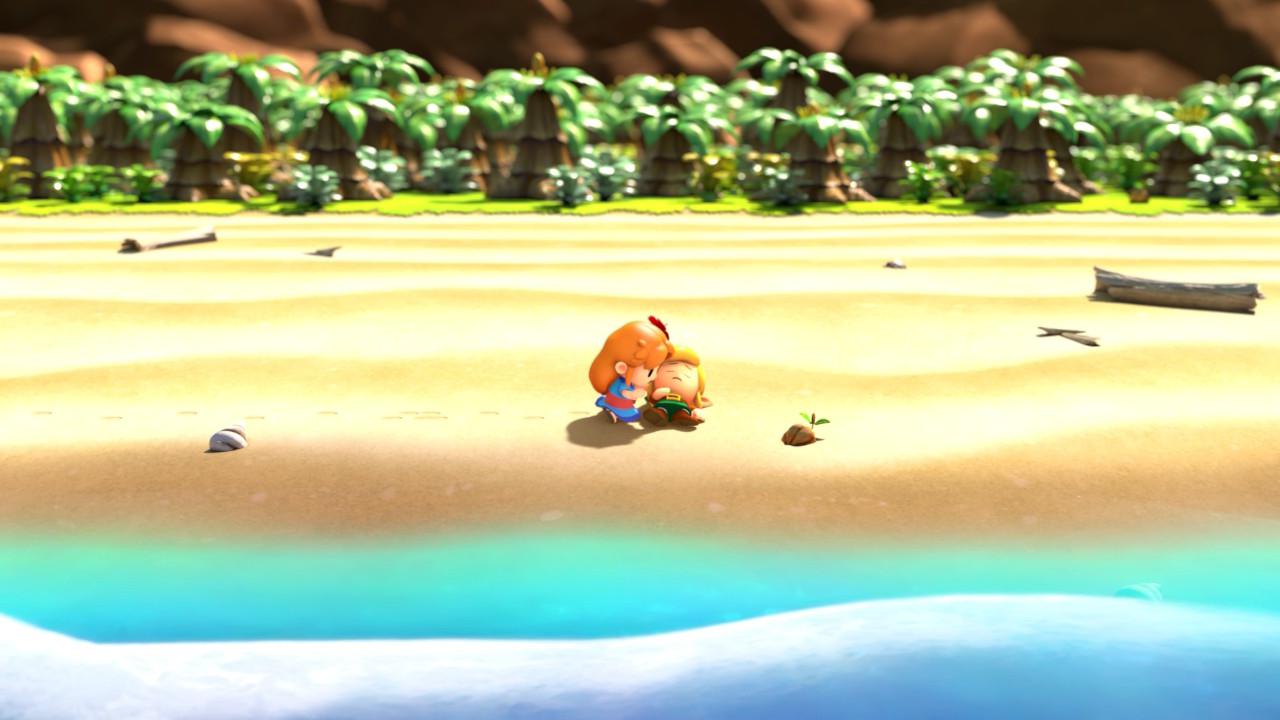 The more I think about it, the more I’m continually astounded by the fact that The Legend of Zelda: Link’s Awakening was originally released in 1993 on the Game Boy. This was such an incredible translation of the Zelda formula onto a handheld platform - on the first attempt, no less! The title was always on my radar as a fan, so the well-received Switch remake was the perfect chance to finally give it a go. And boy, did it prove that over 25 years later, the classic still holds up.

Link’s Awakening is simple to play, but there’s a lot of depth beneath the basic mechanics and world design. However, it was the story and characters specifically that really resonated with me on multiple levels. What interested me the most was the game’s unique, darker approach to the concepts of dreams and escapism. 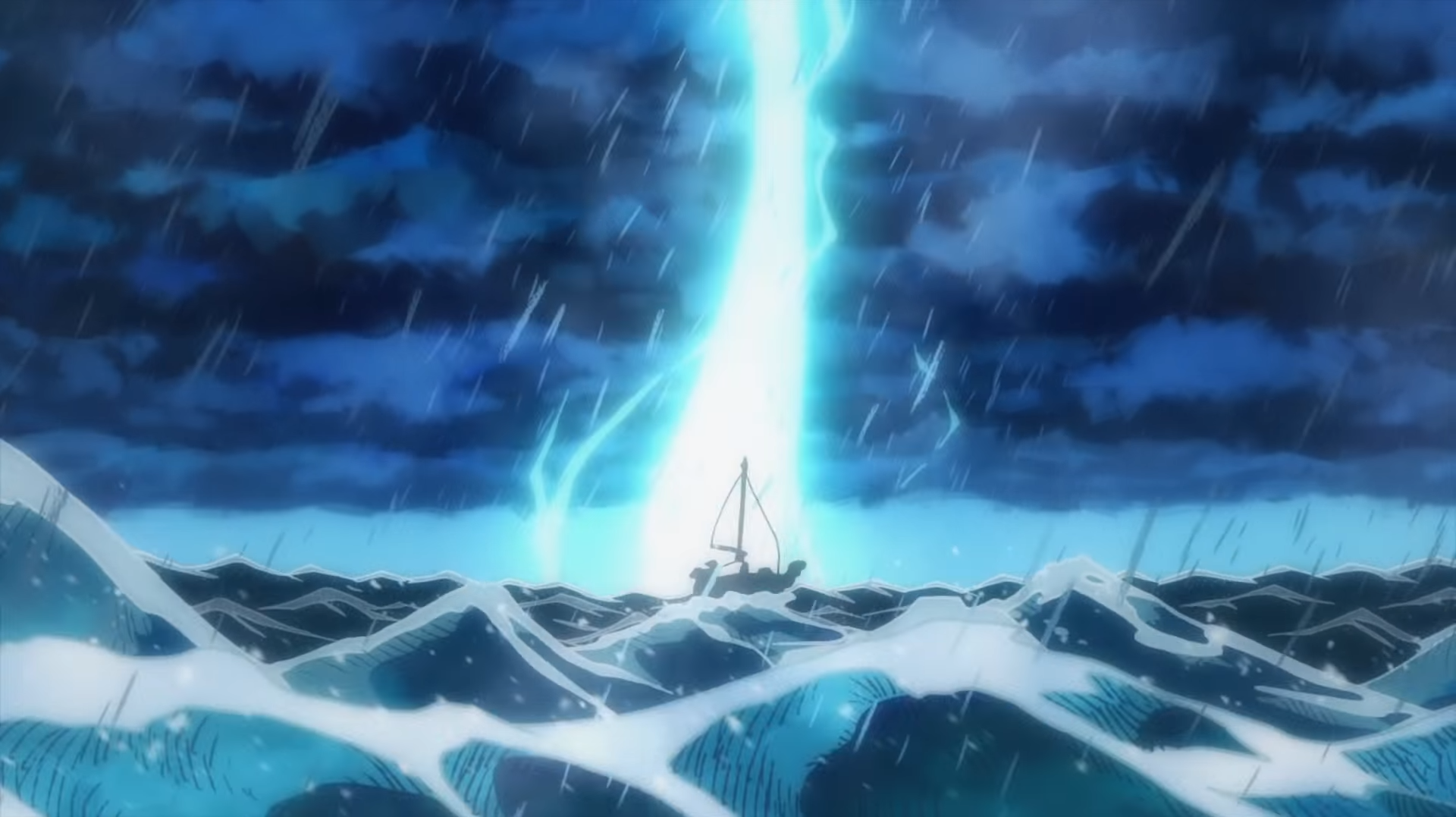 I’ll try to summarize the plot quickly so we’re on the same page: Link wakes up on the island of Koholint, where he washed up after his boat was struck by lightning in the midst of a raging storm. He meets the people of Mabe Village, including a girl named Marin. After reclaiming his sword, he’s met by an owl who tells him that, to leave the island, he must collect the 8 Instruments of the Sirens to wake up the Wind Fish.

About halfway through the quest, Link discovers that the island is actually a dream created by the Wind Fish - waking him up will actually cause the island to disappear. Despite this realization, Link trudges on, collects all 8 instruments, and succeeds in his mission. He returns to the real world, but Koholint Island and its inhabitants are erased. 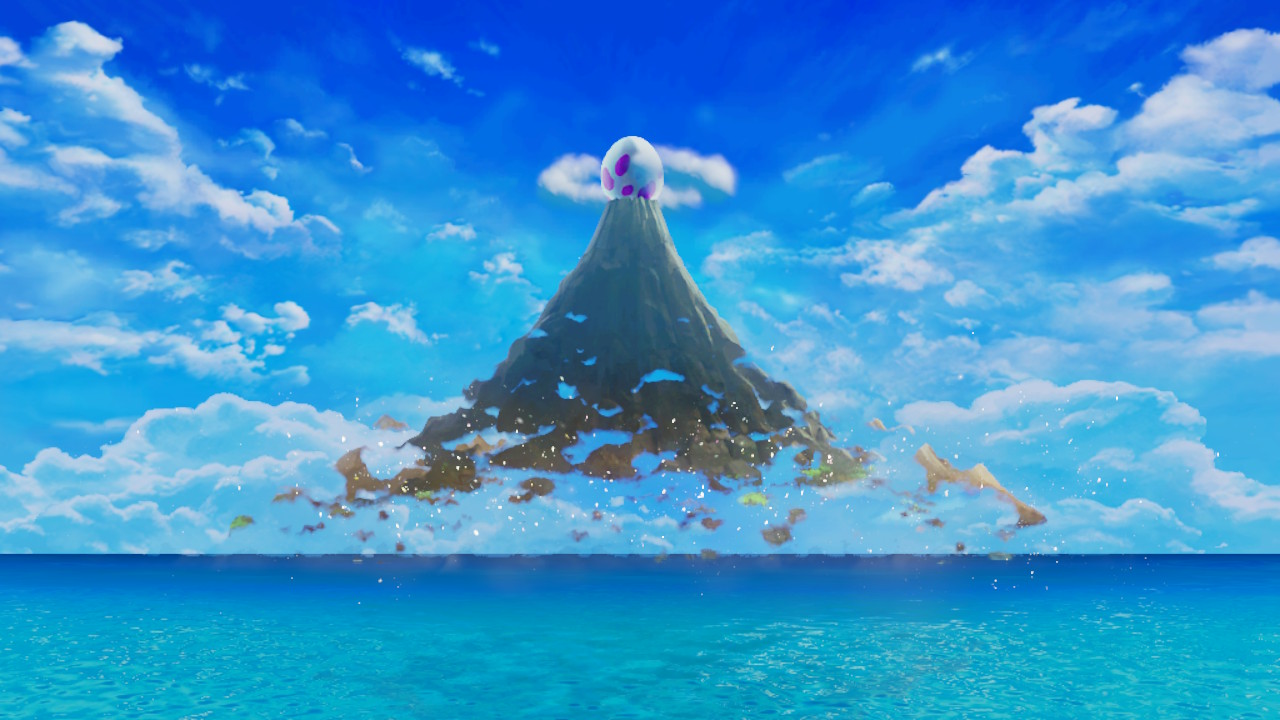 It’s a pretty simple storyline, fitting for an 8-bit game. It’s really the plot twist that makes the tale go from decent to unique and memorable. On the other hand, you could say that the “It was all a dream” trope diminishes the impact of the narrative - it’s not only an oft-used cliché at this point, but after all, if it was a dream, did anything really matter?

The problem with the trope is that it is so frequently used as a fake-out to add intrigue or to resolve a conflict in a deus ex machina type of way. In contrast, Link’s Awakening utilizes the dream revelation as a primary point in its storytelling from the start - there is plenty of foreshadowing beforehand. The trope itself tends to be more effective in video games because games are interactive - as a player, you can genuinely feel and experience things in a more meaningful way than you would as a viewer in a movie or TV show. Link’s Awakening takes advantage of the interactive element to enhance the immersion which in turn bolsters its narrative and takes it to a higher level.

You explore the island and get to know its nooks and crannies. You venture forth into caves, forests, mountains - a castle, even! There are a ton of secrets to find and puzzles to solve. Each dungeon is unique and memorable in its own way. The world itself is fun and awesome to play with.

Eventually, as Link, you can grow accustomed to and endeared by the island’s many residents. There’s old man Ulrira, a shy guy (but not a Shy Guy) who can barely utter a sentence in person but is quite the chatterbox on the phone. There’s Papahl, who tells you that he’ll be lost in the hills later, so be on the lookout for him, okay? Chef Bear is charming and tells you that she wants to open a restaurant branch in Mabe village one day. Sale the alligator collects canned food for some reason!

Of course, there’s Marin, a sweet girl who loves to sing and is beloved by everybody. She dreams about leaving the island, meeting new people, and singing for them. When she meets Link, an outsider, she’s intrigued and interested. She might even have a crush on him! It’s cute. She’s the one character Link gets to know the most and gets the closest to.

And then halfway through, you find out that this is all a dream. 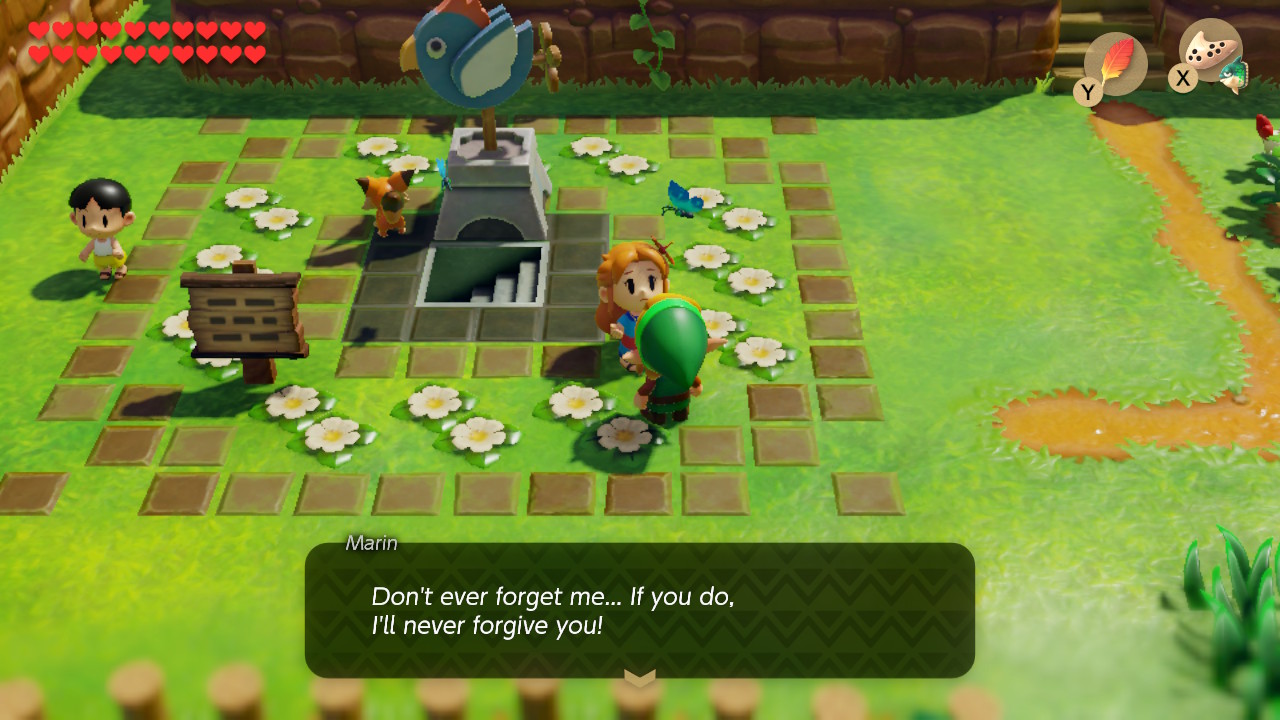 The game draws you in, introducing you to all these cool locales and this quirky, eclectic cast of characters. You start getting feeling more immersed and involved, like you’re really becoming a part of this world. And then, in a dark and cruel turn of events, the game proceeds to punch you in the face and tell you that none of this is truly real.

The entire game is a metaphor for dreams, and the joy and adventure that they offer - an escape from the mundanity (and sometimes sadness) of real life. When you start playing, you’re already in the Wind Fish’s dream. When you reach the end of the adventure and wake the Wind Fish, the world (as you’ve come to know it) ceases to exist. The game is over. 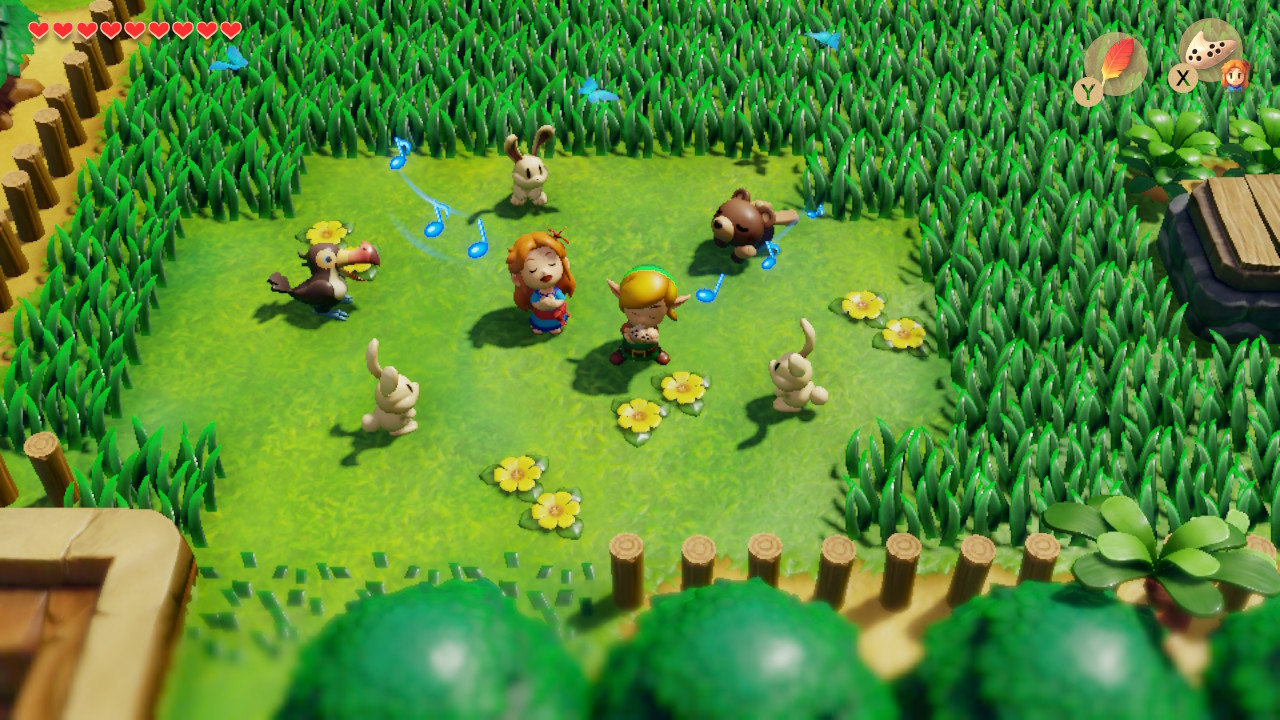 I swear, it’s so easy for me to get lost in a game. I’ve spent so many hours being mesmerized by different characters, worlds, and stories over and over and over again. I’ve become so invested in places like Gaia, Thedas, Kamurocho, Hyrule. It’s been a pleasure getting to know Ellie, Captain Quark, Morrigan, Papyrus, and Victor “Goddamn” Sullivan. I’ve loved stepping into the shoes of Commander Shephard, Francis York Morgan, Spyro, Nathan Drake, Kazuma Kiryu, and of course, Link.

Sometimes, it’s just a lot of fun to be a part of a world and a group of people that couldn’t possibly exist outside of a video game. Sometimes, playing a game just feels like a sweet getaway when reality gets difficult to deal with. And when you get to the end of the ride, it’s often bittersweet and sad. It can be tough to let go and accept that.

Dreams are a lot like that, too, when you think about it - so close, yet so far away. They can be a break from the darkness and challenges that come with life. That’s what’s so alluring about them - dreams and games both. The Legend of Zelda: Link’s Awakening is genius in that it has a laser-sharp focus and emphasis on the idea of dreams through the medium of a video game. This is why the twist works so well - everything is in pursuit of engaging and involving the player more and more until ultimately, it’s time to wake up.

Sometimes, it can feel awful and terrifying to come back to the real world. You might not want to stop, and let things end. But eventually, all dreams do. All games do. You can’t keep running away. 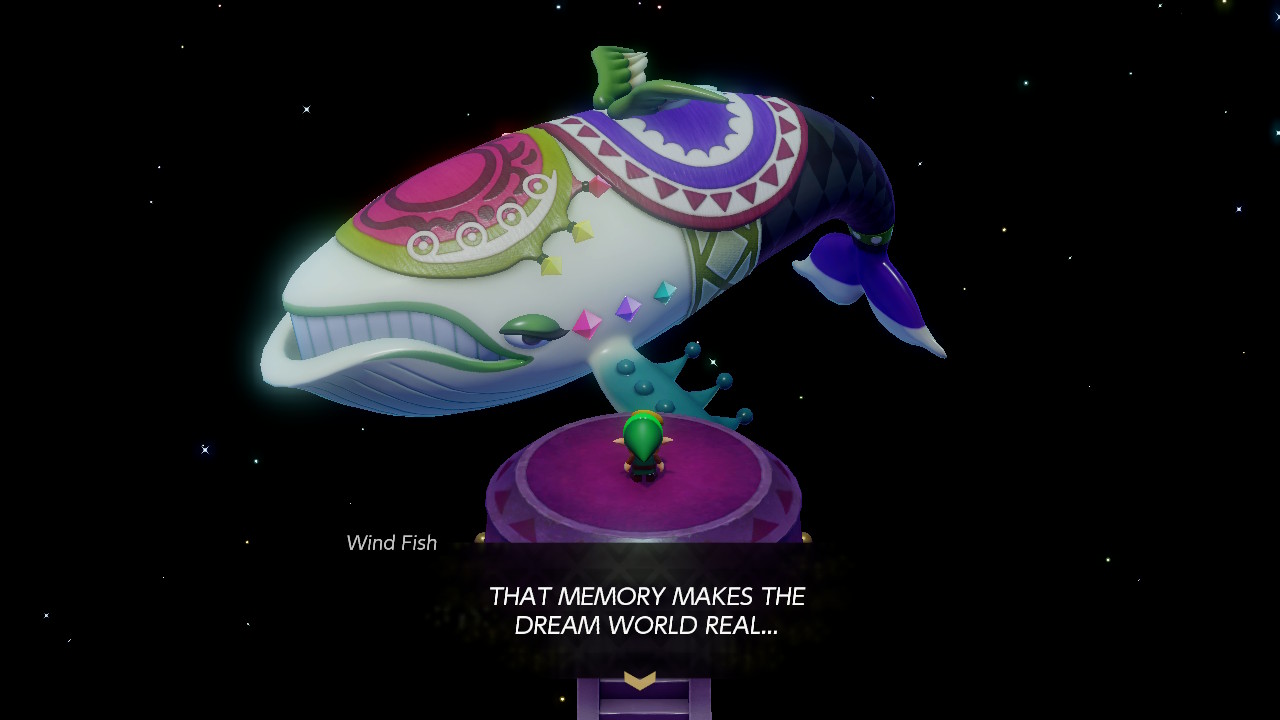 The game closes with a comforting thought: even if the dream ends, the memory remains. As long as you keep the experience alive in your heart, the dream never truly fades away. It’ll always be a part of you, just like you got to be a part of it. As long as you were affected, everything mattered. The adventure wasn’t for nothing. Meeting Marin and everyone else wasn’t for nothing. They were real - it was all real.

Not too shabby, to do all of this as an old, tiny Game Boy cartridge from the 90s.