Other than the fact that it is part of the illustrious Shining series, and one of the few RPGs on the Saturn, I don't think that there is anything much remarkable about Shining the Holy Ark (other than such a grammatical mess of a name).

It's a boring by-the-numbers First-Person RPG that does little to stand out. 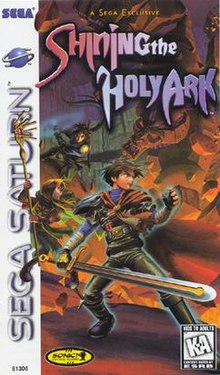 The game starts with a hunt for a dangerous criminal ordered by the king of the country himself. As part of a mercenary trio, you corner that criminal inside a dark cave, and after a fierce fight, the floor collapses plunging all four fighters to their death.

Yet, in the darkness of that cave, the spirits that caused the collapse saves three of the fighters, including the criminal, while a dark spirit obviously possess the third member of the mercenary trio. Bound by the spirits, you must go and find your lost partner and discover what is the secret of these spirits and your place in the destiny of the world. 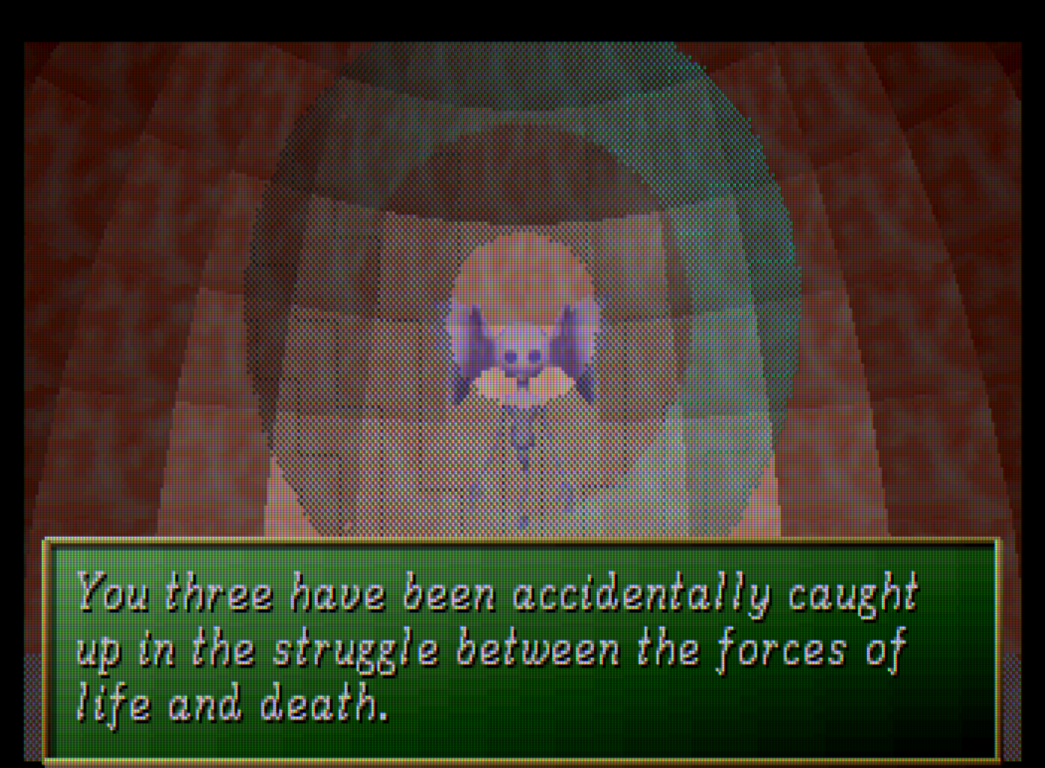 And whose fault is that?

Honestly, it is not a bad set-up and the story progresses smoothly with good dialogue and characterization. Nothing too special or too distracting, aside from cringe-worthy attempts at humor. It's a basic JRPG story that is better told than many others but is outclassed by the classics and other JRPGs of the same era.

"Yeah... Since you are the mighty swordsman, you lead the way"

If I were to analyze the game's story more critically, I would find that many of its shortcomings are directly related to its gameplay. As a First-Person RPG, Shining the Holy Ark typified the genre with its focus at pushing the player towards more dungeon crawling.

Somehow, the game is convinced that you should traverse its dungeons as much as possible in order to have some fun. That may have been the case in a time where its battle system wasn't too outdated and in a console with few RPGs, but it surely not the case today. 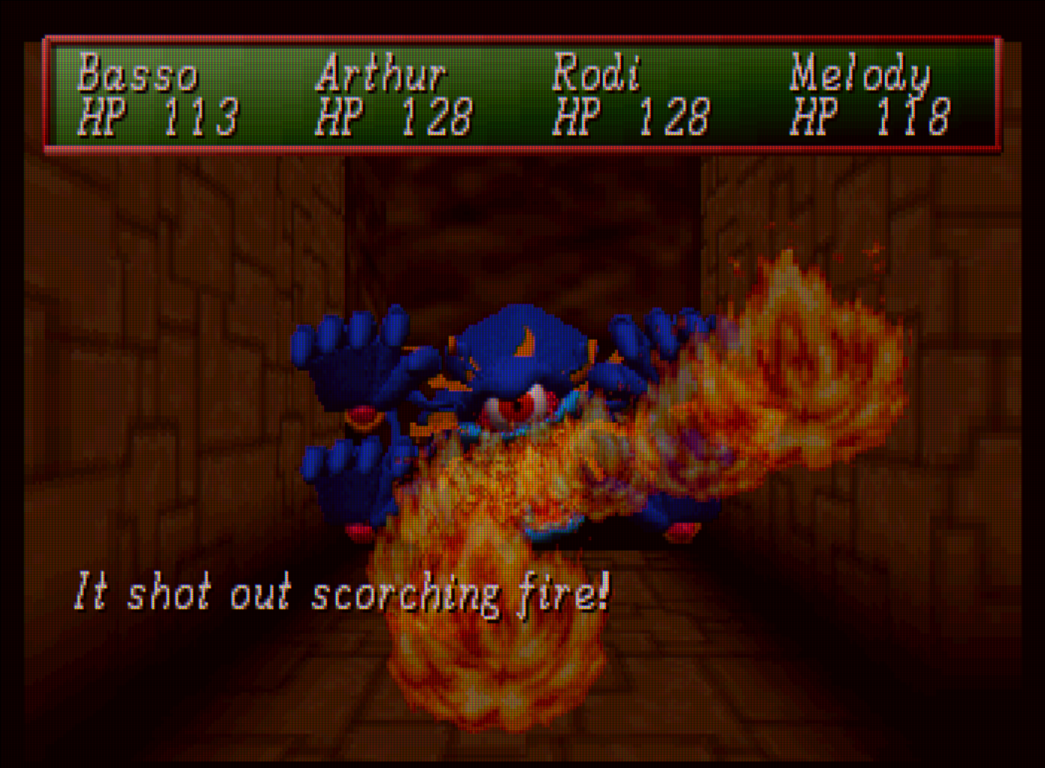 With a very basic turn-based battle system, there isn't much that differentiates battles from each other. The difficulty is mostly on point, but it is very obvious when you simply need to grind to progress. There are limited strategy options and little to no customization opportunities.

Simply, it becomes a slog to go through much of the game.

The reason that much of the game is a slog is due to its incredibly boring dungeons. Visually, conceptually, and inactively boring dungeons are the theme of this game. Being a first-person game, you expect the game's dungeons to be labyrinthian in design. What you don't expect is for those same dungeons to require much backtracking. It becomes incredibly boring, especially when the battle system is uninspired and several trips back to town are required to complete it.

Ironically, the game's most unique and engaging element ends up exposing its biggest flaws. One thing I enjoyed is how enemies show up on the screen. While they are randomly generated battles, the enemies physically appear somewhere around the player. For example, you could see them running towards you from the distance or you may see a monster's claw as they approach from the corner. In that window of opportunity, where the monsters reveal themselves but are yet to attack, you can use pixies to score an opening attack that helps shorten battles and get more experience points. 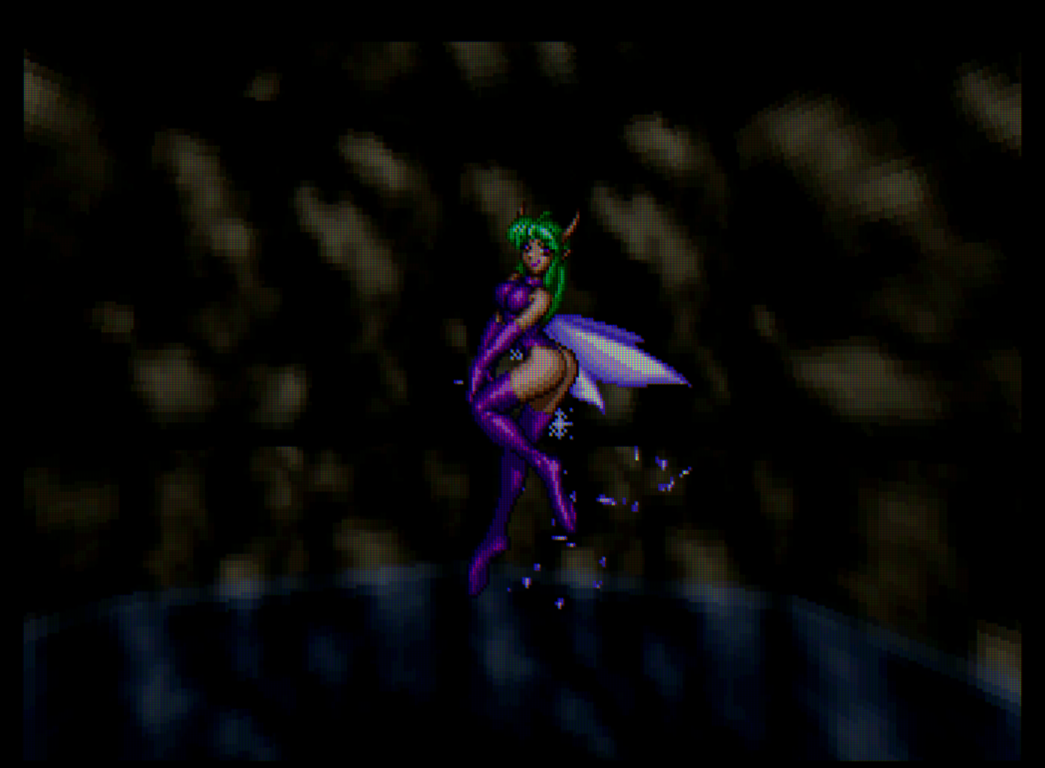 Are you happy for hiding behind that EXTREMELY ORDINARY wall?

With five types of pixies, each guarding a single direction, it provides an active experience where you need to quickly switch between the pixie types as you see where the enemy is approaching from and then spring your attack.

This fun little element in battle and exploration is marred by the need to actually find those pixies. You see, most of them are not in treasure chests or hidden cleverly in the environment inside obvious pots or special looking rocks. No, the majority of pixies, and items as well, are hidden in the bland dungeon environment of the game. This means that without a guide, you need to wast your time like an imbecile "searching" every wall in the game, skipping the text box declaring your idiocy to the world.

Directly supporting the game's intention to confuse and beguile you in those pixie hunts is its art direction, which provides no character or distinction to its many dungeons. With the bland semi-3D design, the game world is a barren mockery of the colorful localities of previous Shining games.

The characters fare better, with acceptable designs and models that aged better than most. Even the polygonal models were not as bad as I initially noted, notwithstanding the fact that 2D portraits would have been much better. 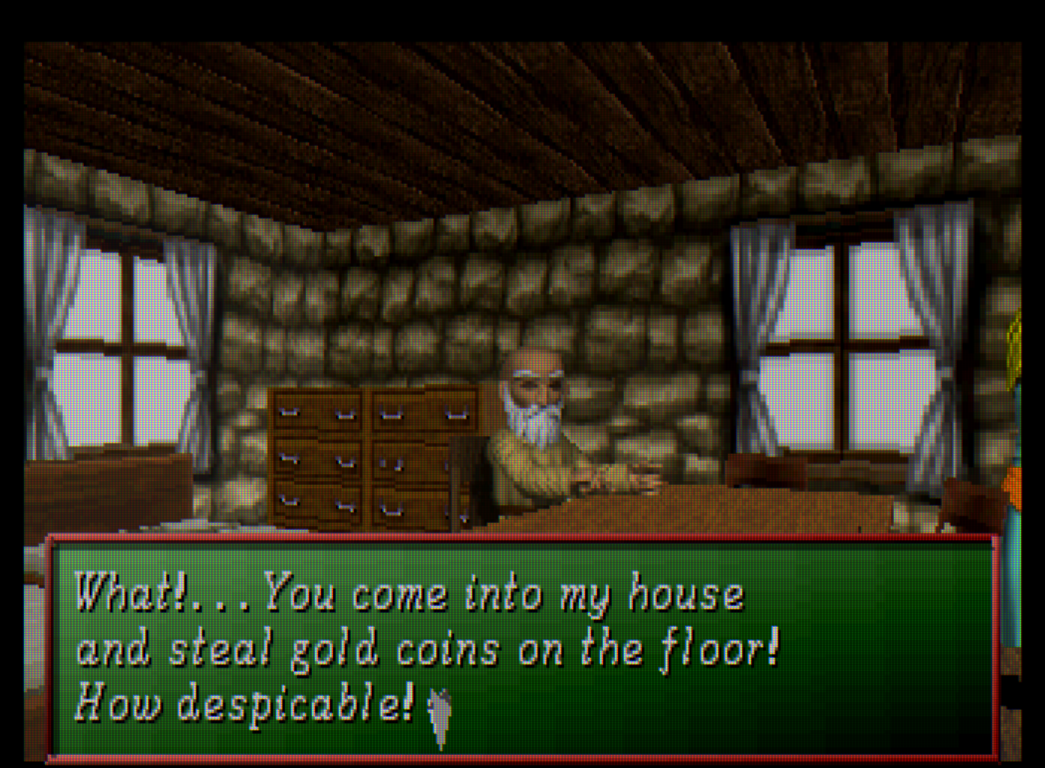 Musically, the game was fine. In fact, it had some really good tunes which made dungeon crawling more bearable. That is until you hear some of those horrendous sound effects. For some reason, those effects consist of pongs and screeches that bury the best part of the track on a consistent basis.

Overall, the game's production values are far removed from what the series is known for, aging poorly in the process.

Even though it doesn't avoid the curse of early 3D RPGs, it is not incredibly ugly either. Somehow, the fact that it is a first-person RPG both contribute to its mediocrity and save us from what could have been uglier and blander game. 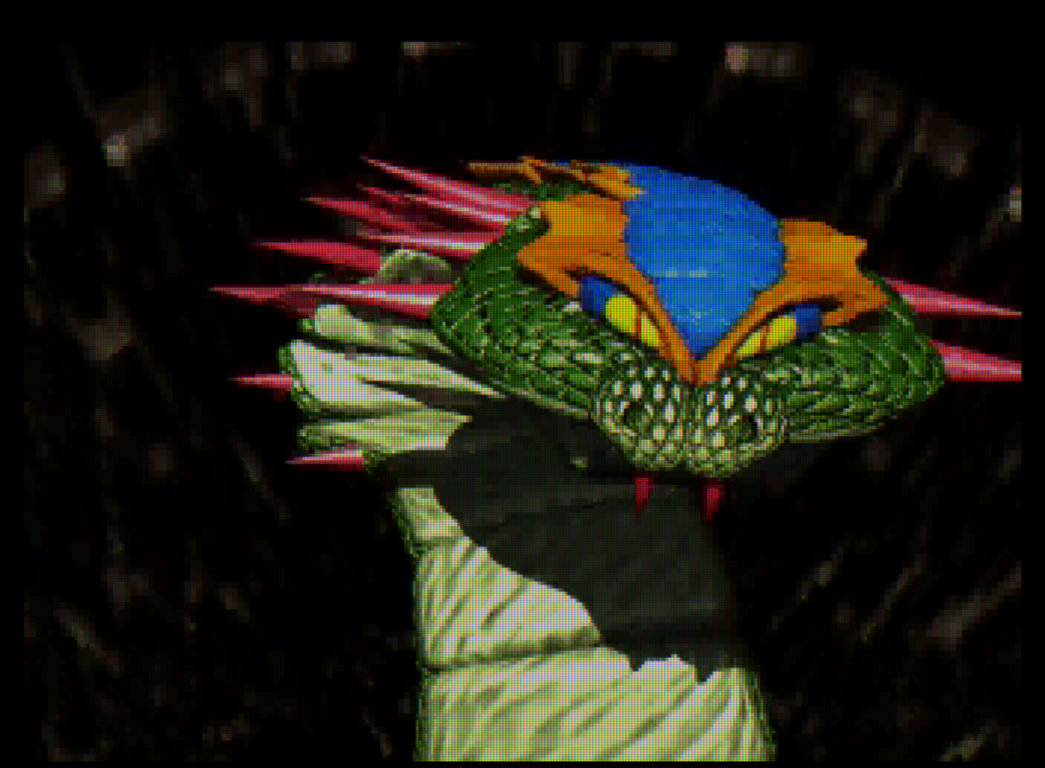 An intro to one of the game's bosses

1- You will need to search around the dungeons like an idiot to find items and pixies.
2- Spare yourself the headache and simply use an online resource.
3- At some points, you will simply need to grind.
4- Learn how to best use the pixies for a useful opening attack.
5- You can actually sell key items (once you don't need them) to get some cash and free-up inventory space.
6- If you accidentally sell something you need, you can buy it back for a higher price.
7- Some doors are jammed and need you to dash through them at full speed. 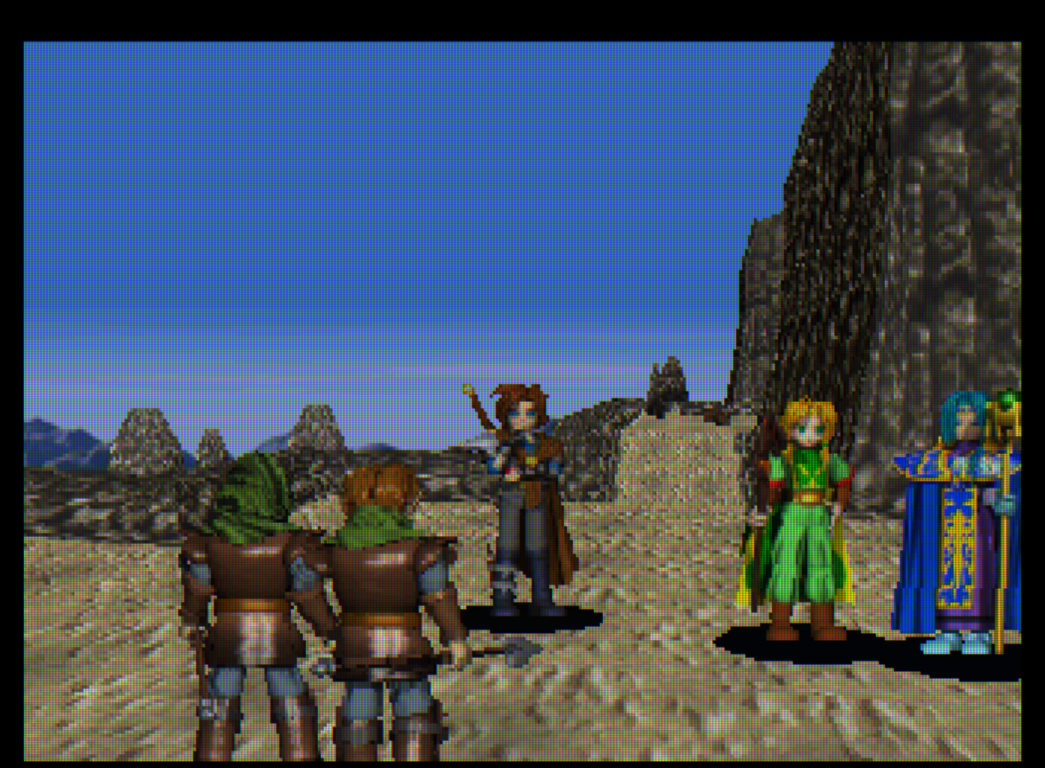 Part of your merry band

As a fan of the series, I hoped that Shining the Holy Ark would prove to be the rare good First-Person RPG of its era. Unfortunately, that wasn't the case, with the game showcasing many of the problems associated with that genre in those early days.

Next in my review list, I will review a game suggested by one of the commentators here. That game is Astal which was used in lieu of the availability of Sonic to launch the new console.