Fatal Frame (AKA Zero or Project Zero) is a survival-horror game developed by Tecmo and published by them in 2001-2003 on PS2 and Xbox in Japan and in NTSC regions. The EU versions were handled by Wanadoo Edition and Microsoft Game Studios. After her brother Mafuyu disappears while searching for his tutor Takamine, the young girl Miku follows his notes and soon find herself trapped in the haunted Himuro mansion. Armed with nothing but a magic camera, she explores the mansion and tries to find her brother. 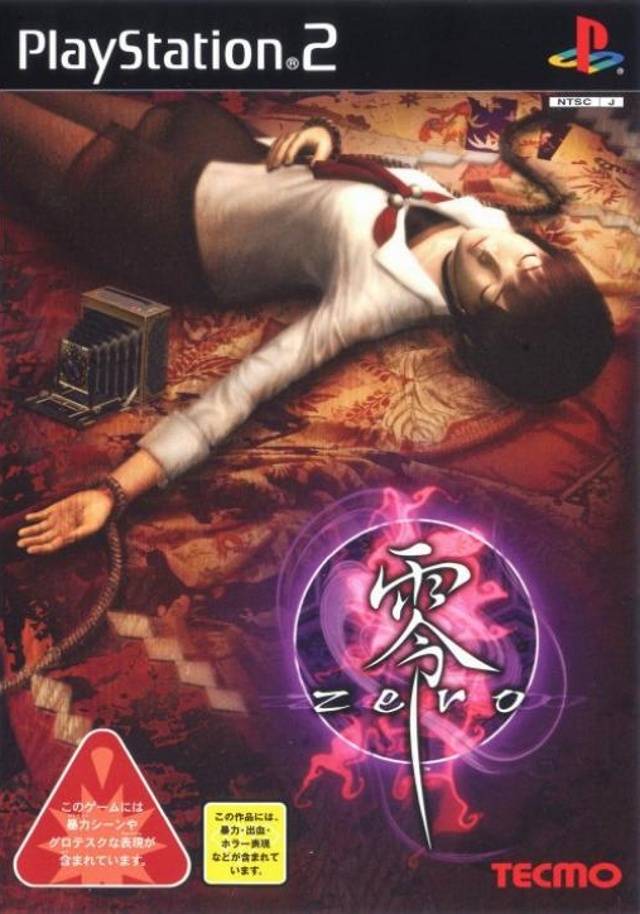 This Story Really Tries To Rope You In

Miku's journey through the Himuro mansion is a nice little tale, but I think they minimized the scope of the story slightly in order to not risk the game's development running out of hand. And since the game has a satisfying length of about 6-7 hours first time through, I can't harp on them for doing so. But it's clear that the game has room for a more detailed story.

The first disappointment has to do with Miku herself, as she is basically just an audience surrogate with very little characterization to offer. She wants to find her brother, she gets spooked by ghosts and that's about it. She needs some more narration or a journal describing her thoughts on what's going on, just something to give her more character. The wooden voice acting doesn't help either, though it does work for the ghosts surprisingly well.

The most interesting part of the story is its framework. As Miku, you're basically following a conga line of people backwards in history, starting with her brother Mafuyu and ending with the original residents of the mansion. It's a really good way to frame a cursed mystery story, as you are only afforded vague hints at the start and then given more and details about the curse as you go along.

I was initially excited for the correlation screen the game offers, which connects characters and gives brief bios on them like in a few of the Yakuza games. Sadly, it only really plays a part in the start of the game, as a majority of the latter ghosts remain nameless, even though you find letters related to them. I understand not wanting to flood the player with names for characters that ultimately do not matter that much. And it does sort of add to the horror when you're up against ghosts who have lost their sense of self and become forgotten, only to be indentified by the game through descriptive names.

But I also think that it's a shame that the narrative isn't more detailed than this. As is, there really aren't many conclusions to draw that the game doesn't give you. I think it would be better if there were a few details or connections that weren't immediately obvious and required you to replay the game (as you are incentivized to do through some extras) to suss out. Again, it's not bad at all, but the potential the game has to be something more is almost aggravating.

Why Yes, I AM Afraid Of Some Ghosts

Fatal Frame delivers the one thing I want most of all in a horror game, which is enough dread to make it difficult to continue playing. The damn thing even robbed me of a few hours of sleep!

It accomplished that through an excellent combination of ambiance, rather fancy lighting, scary music and controller vibration. In an effort to be immersive, controller vibration is used to foreshadow supernatural events, not unlike the radio in Silent Hill, though far more subtle. I can't recall the game going for surprise jump scares either, so it gets points for that too.

But atmosphere and build-up means nothing without pay-off and the game's ghoulish ghasts deliver that in spades. Most of them are deformed and horrific bastards that can appear just about anywhere and phase through walls to get you. But what really makes them effective is that they don't seem to be malicious for the most part. Since they are cursed, they might not even know that they're dead or that they hurt you by touching you. Hell, a lot of them seem more scared than Miku is! It really adds another layer to this cake of terror, which is topped with your interactions with the ghosts through the combat system. 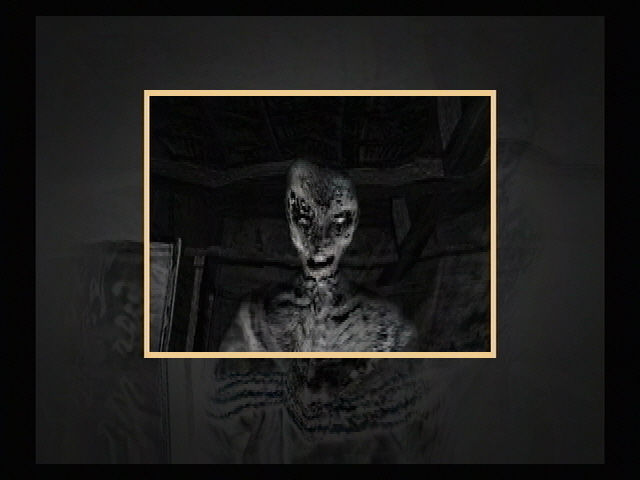 The Fatal Frame series stands out to me for seemingly being the only pure-bred survival-horror games with an engaging combat system. Not only that, but it also works to accentuate the horror, as it rewards you for spending time with the ghosts right up in your face.

It works like this: Miku is controlled through 2D movement (Up on the stick moves her up according to the camera, so no tank controls unless you choose them.) with the run button letting her move forward regardless of the camera, thus minimizing the issue of a character running backwards as soon as the camera switches angles.

This affords you a fair amount of mobility, which is important when you need to reposition yourself greatly during a battle. To actually fight, you need to pull up the Camera Obscura, which transitions the controls and camera into battle mode. From a first-person perspective, you then have to position your reticule on the ghost and take a picture in order to deal damage and eventually exorcise it.

While that can be somewhat difficult depending on the ghost, the game affords you some nice control options in order to make things easier. There is a 180 degree quickturn and you can also move Miku while aiming, which I'm quite surprised over. Not something you'd expect for such an early survival-horror title. But it does add to the horror nicely, as you can only backpedal so much before you hit a wall, which really cranks up the tension if the ghost isn't preparing the attack you were hoping for.

Tecmo could have left things there, but decided to actually add some depth to combat, which I appreciate. Snapping a ghost is relatively easy, but to really do damage, you have to be both skilled and willing to take some risks. There are a bunch of bonuses to damage, the easiest of which is to charge your shots by keeping the ghost in your reticule for a few seconds. This, alongside with limited high-strength film disincentivizes spam and encourages you to make the most out of every shot. And to do that, you need to keep the center of the ghost on your reticule, wait for them to enter an attack animation and wait for them to get very close to you. So you essentially have to bait out jump scares in order to be the most efficient, which is genius!

The game is very much in the "high risk, high reward" mentality, as the ghosts deal a lot of damage, so much so that they can often kill you in 3-4 hugs. Because of this, I spent a lot of time reloading just to retry the more difficult fights, as it felt wrong to eat that much damage from a single fight. Turns out I was a bit paranoid and ended the game with an abundance of healing items. I think the intent is for you to learn to cut your losses and lame it out with safer shots whenever you run into some crazy attack patterns and save the mastery for the battle mode and higher difficulties. As an aside, I really like the amount of extras put in the game. Really makes it easier to appreciate as a product.

Tying into how robust the combat system is, there are also camera upgrades to aquire with points you earn by doing skillful shots. They are basic (range, max charge power and charge speed), but each upgrade really makes a difference. There are also special abilities to unlock (slowdown, freeze, pushback), but I don't like them as much. They are pricey, so after maxing the camera's normal abilities, I only had enough points to buy one ability close to the final boss. And even then, with how limited the special ammo you need for the special abilities is, I can't see myself using them much in NG+.

Ghoulish Ghosts Around Every Corner

Exploring the Himuro mansion isn't far off from the original Resident Evil's mansion, though I find it a lot greyer and more linear. The monotonous colour scape serves its spooky purpose, but it can make it difficult to tell rooms apart. And while progress is linear from chapter to chapter, you are afforded a fair degree of freedom to explore side areas, which rewards you with a few goodies and extra ghost battles.

The limited scope present in the story extends to exploration as well, as the mansion sort of resets between chapters, locking and unlocking doors, thus forcing you to backtrack through old areas in order to make progress. Having the mansion be bigger would be ideal, but thanks to new ghost encounters, it's kept fresh enough not to be bad. Not to mention that the game features non-hostile ghosts (either secret or temporary) that you can snap for extra points. The game offers another kindness in the form of the spirit finder, which glows whenever something ghost-related is nearby. It makes combat much easier, as you can tell when ghosts teleport.

But you can also use it to detect the bonus ghosts or areas where you need to take a photo to progress. You then get a picture of where to release the seal on the door, which you need to find in order to progress. These puzzles are more of a way to point the player in the right direction, but there are more conventional puzzles too. And I can't say I like them that much.

First of all, many are based around being able to tell Kanji apart, which a bit of a pain for a westerner such as myself. Second of all, they reuse a bunch of puzzles, with the sliding puzzle ones being a particular headache. That's on me for having a brain that melts when tasked with thinking 3 steps ahead of the current move, but the game would be better of with more puzzle variety, especially those focused