Fan made games have been around for years and they vary from unofficial sequels to taking a existing IP and putting it into a different game genre  Sonic Smackdown is the latter, and while Sonic has dabbled in fighting games before such as the game Sonic Fighters. Sonic Smackdown made by Arcforged takes a more traditional 2D fighting game along the lines of Capcom's Marvel Vs Capcom series though it is a one on one fighting game but a lot of mechanics will feel familiar such as Aerial Raves, Chain combos etc.

Running on the Unreal 4 engine, they are working on this along side there own original fighting game Origin of Storms. There is a playable build of Sonic Smackdown that anyone can access here. Currently there are Six characters with Sonic, Tails, Knuckles, Mecha Sonic, Shadow and Rouge with 4 stages and background music with more planned later.  Two modes are playable with a Versus and Training Mode. 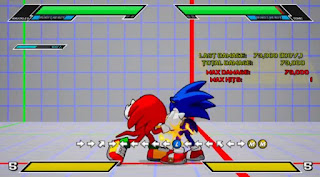 The game has received positive feedback and is constantly being updated, but there is always the the cloud looming of cease and desist letter from Sega, in the past they have been temperamental when it comes to that, for example the Streets of Rage Remake being shut down but then hiring people in the Sonic fan game community for Sonic Mania.

I think it is a incredibly fun game and feels quite polished even at such a early stage and hopefully Sega see the potential and perhaps give them the backing to make this a official game.