Traveller In Playtime - The Suffering

The Suffering is an action-horror game developed by Surreal Software and published by Midway Games on PS2 and Xbox in 2004. In that same year, Encore and Zoo Digital Publishing published a PC port for NTSC and PAL regions respectively. The game begins with protagonist Torque getting taken to death row in Abbott State Penitentiary on (the incredibly cursed) Carnate Island, for supposedly killing his family. As soon as he is situated, an earthquake hits and strange monsters begin killing inmates and guards alike, leaving Torque free to leave his cell. 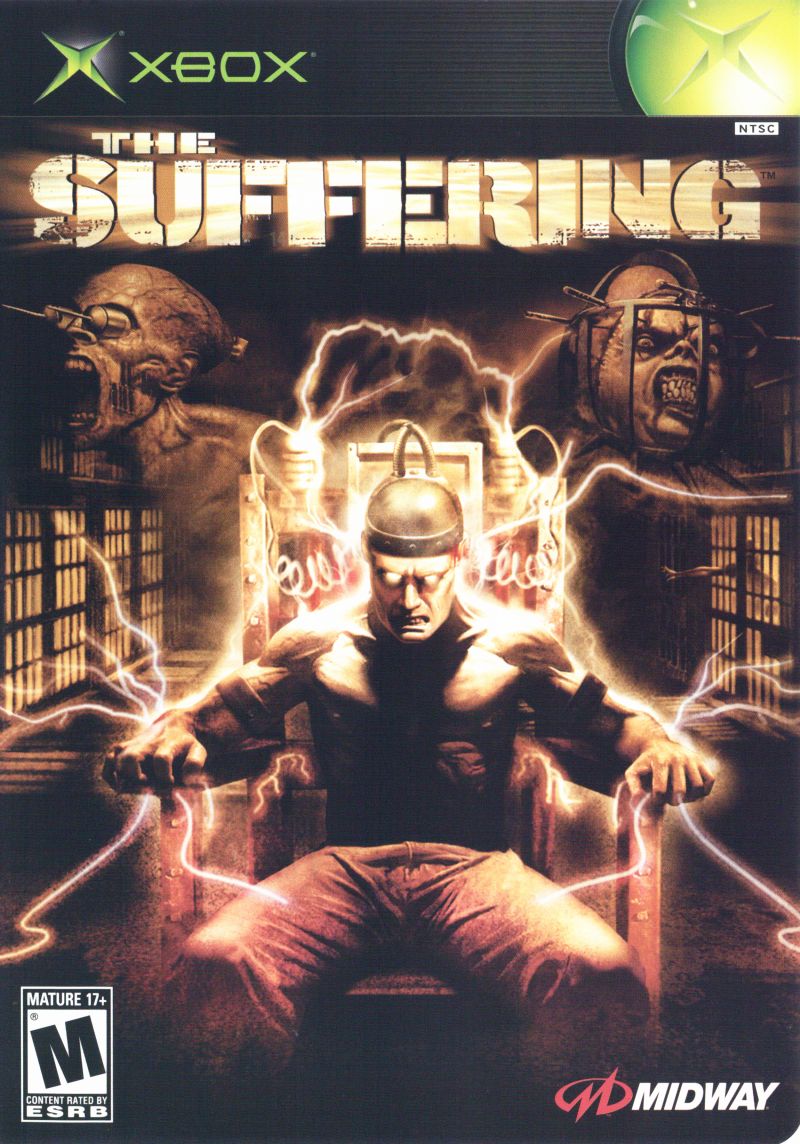 A Man Is Defined By His Actions

The story of the Suffering is basic (bordering on bland), but presented well, so I find it engaging nonetheless. Torque is a silent protagonist, so the other characters carry the burden of storytelling as you make your way across the island of Carnate and learn just how much of a cursed shithole it really is. Besides the assorted guards and inmates you run into (who are not very long-lived), your main source of story are a trio of ghosts inhabiting Carnate who all have an interest in Torque, plus some really nice audio logs detailing the nature of the game's monsters and the history of Carnate island.

The three ghosts are the game's highlight, as they are all uniquely realised and entertaining to observe, even if what they try to convey isn't that interesting. Something about man truly being a monster or something. The whole thing is a bit muddled and weak, though consistant enough.

Not helping matters are the ghosts of Torque's family plaguing you throughout the whole game with their incessant guilt tripping. I'm amazed in just how many ways you can get a character to try and make the player feel guilty about a murder without technically repeating dialogue. It's a writing feat if nothing else.

And that guilt might not even be completely legit, depending on how you choose to interact with the game's morality system. It's an incredibly simple affair, so much so that I can almost see the numbers beneath. Throughout the game, you'll come to situations where you can be a murderous asshat, or just be somewhat nice. Picking one over the other has little effect on gameplay (aside from not murdering a temporary and somewhat helpful companion if you decide to be good), but it will determine your ending. 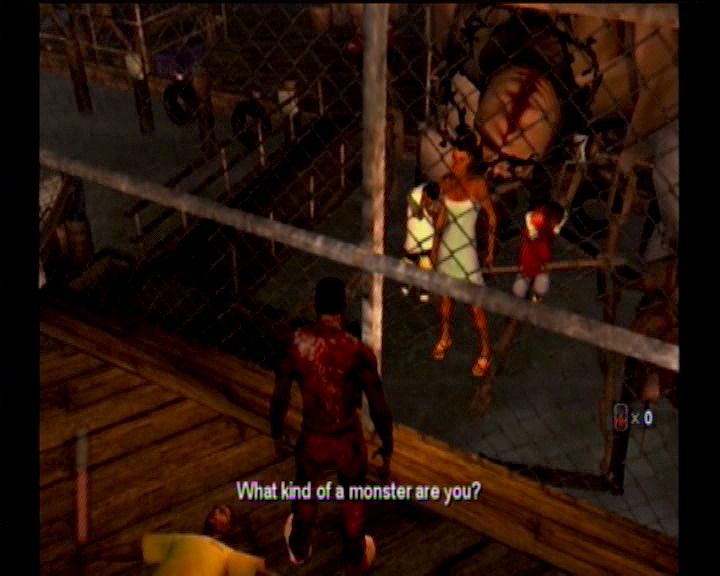 An ending that rewrites reality, as it'll change the truth of the family's murder, either absolving or condemning Torque, with the netral ending just being ridiculous. I'm not a fan of this system, as it doesn't add as much to the game as it detracts. The choices aren't interesting and the resulting endings aren't either. I think the game's narrative would be a lot stronger if they had just picked whether Torque was guilty or not and deliver it as a decent twist, or use it to further another plot point. As is, it is an engaging story, but it feels like it was concieved by people who don't know how to play to the strengths of horror stories.

The Things You Only See In Prison

Being an action-horror game, one can only expect the game to try and spook the player so much before letting them play around with a mounted machine gun. And you'd be right thinking that, but that doesn't mean the game can't be a bit gruesome from time to time. It's pretty violent all around, but does at least manage to slow down and build up some dread for at least one level.

I like the monster design, as they are all based around methods of execution, which makes for an interesting set of baddies to shoot in the face. Sadly, I feel like the game is missing some unique horror encounters. Everything you run into is something you'll be shooting at a lot before long, so the game never really tries to be surprising. While not everything is explained, everything does feel "expected". The game never strays from its groove of weird images flashing on your screen, people getting slaughtered and monsters appearing around the corner. It just becomes old hat after a while, thus undermining potential horror.

Shiv Them All, Torque

Ignoring the legacy of horror games that came before, The Suffering never tries to disempower the player in any way. Instead, you'll be gunning down hordes of monsters by the first hour and achieve an impressive kill count by the end of the last. It's basically styled after 90s PC shooters, which is probably why there is an FPS mode in addition to the standard 3rd-person camera.

No matter your camera preference, the game plays well, as it gives you enough tools to make things even against the hoardes of Carnate. Torque has access to a decent selection of guns, grenades and even a dodge roll. While your ammo is by no means infinite, it's not ever an issue either. It's just a matter of using whatever gun has the most ammo and not giving the matter further thought.

And that's the major failing of the combat. It works fine and can be pretty fun, but it lacks interesting decisions to make on the fly. Healing is instant and the game is rarely hard enough to make choosing when to use Torque's Insanity Mode (Which grants you to rip and tear your way through the poor monsters.) difficult. Not to mention that the enemy variety is just a bit lacking, especially when you get swarmed.

Since the game places so much weight on its combat system, it should do more with it, be it through environmental interactions, more complex enemies or more player abilities. I didn't find the game a slog to play through, but I'm not jumping for a chance to play the sequel either. It really stretches its mechanics for as long as it can get away with.

While the game is generally pretty linear, I did find a bit difficult to make progress sometimes. There are some light puzzles to be solved, but the game is sometimes bad at conveying what the actual problem to solve is, not to mention what your tools are. I'll give props to the puzzles for not standing out and feeling too gamey, but without interaction icons or any inner narration from Torque, it can be difficult to tell what you can interact with. The levels being somewhat wide every so often sometimes doesn't help either.