For this month's theme, I was intending to play Stardew Valley, a life/farming sim. It's a fantastic game, but as I started a new game with the intent to go after Leah this time around, I noticed that I wasn't feeling all that relaxed. Stardew Valley has a lot going on, each character has hidden likes and dislikes, each season has exclusive crops and fish, all sorts of stuff. I found myself constantly checking the wiki for the game to see what I needed to do to get a person to like me, or to see when I can catch a certain fish I needed for the community center.

I figured that there were two ways to solve this problem. The first is I could just ignore all the things in the background and try to play the game naturally, without checking for information online. The second and more alluring option was to mod all the info into the game so that I didn't have to go looking it up.

I went with the second one.

Despite having my gaming PC for a few years now, and upgrading it a time or two, Stardew Valley is the first time I've seriously modded a game. I've played around with it a little in some other games, never really getting very far, but Stardew Valley makes it so easy. In short time I had a Nexus Mod account and had downloaded SMAPI, which installs itself into the game's files and creates a folder that you can just drop mods into and Content Patcher, which automatically changes the games files for you when applying a mod that changes character sprites or adds locations.

So what other mods did I download for Stardew Valley? Let's take a look: 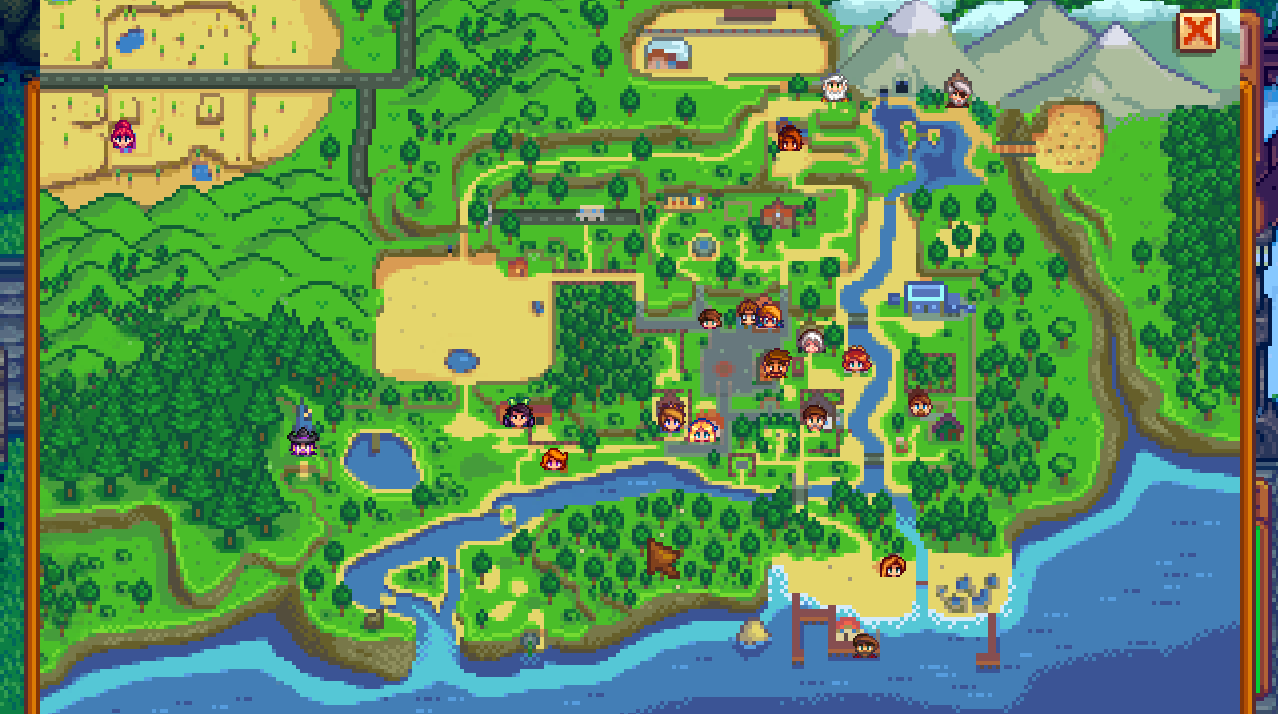 Have you ever needed to give an item to someone in Stardew Valley and just couldn't find them. It's the worst. I've wasted entire in game days looking for someone, eventually looking up their schedule in the wiki, and still getting confused as to where they were. This mod fixes that right up. You can see right where everyone is at any time by looking at the in game map.

What are you missing? 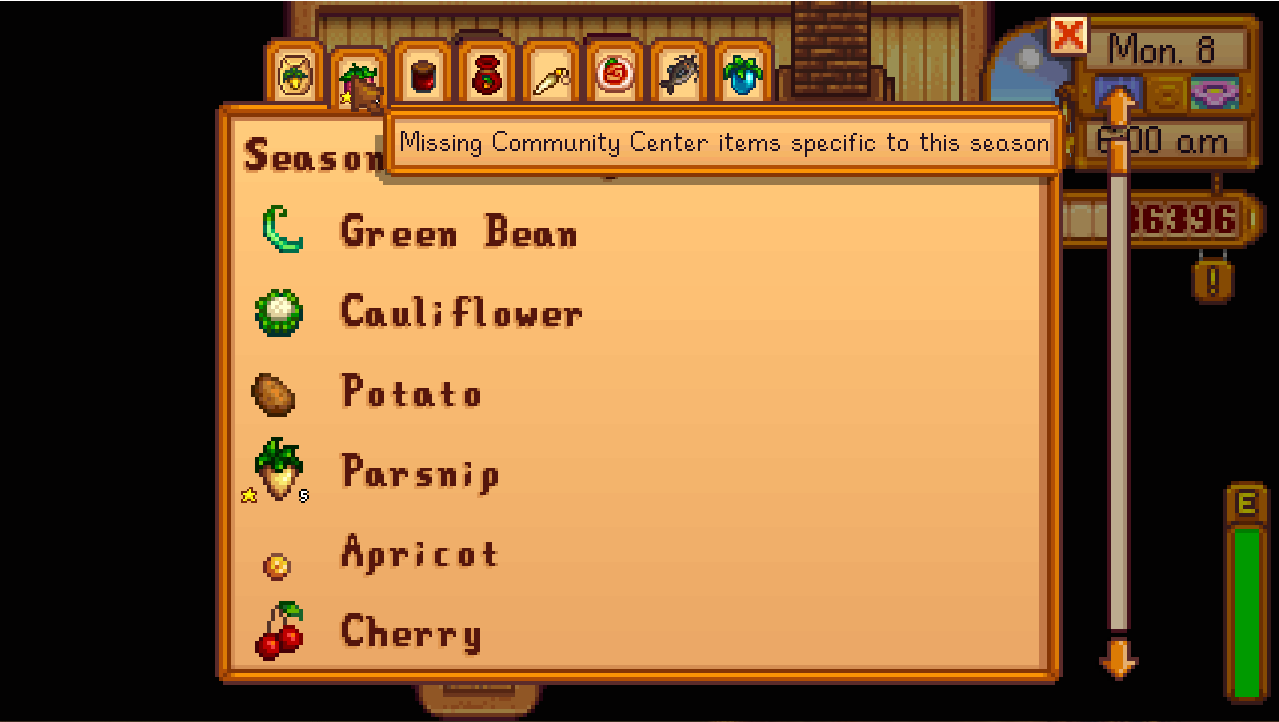 This one is so helpful. The push of a button pulls up a menu that shows you what you are missing. You can specify if you want missing community center items, and you can then further specify items that you can currently get, like plants that can only grow in this season. One of the best things about it though is that it will tell you when and where to get specific fish. 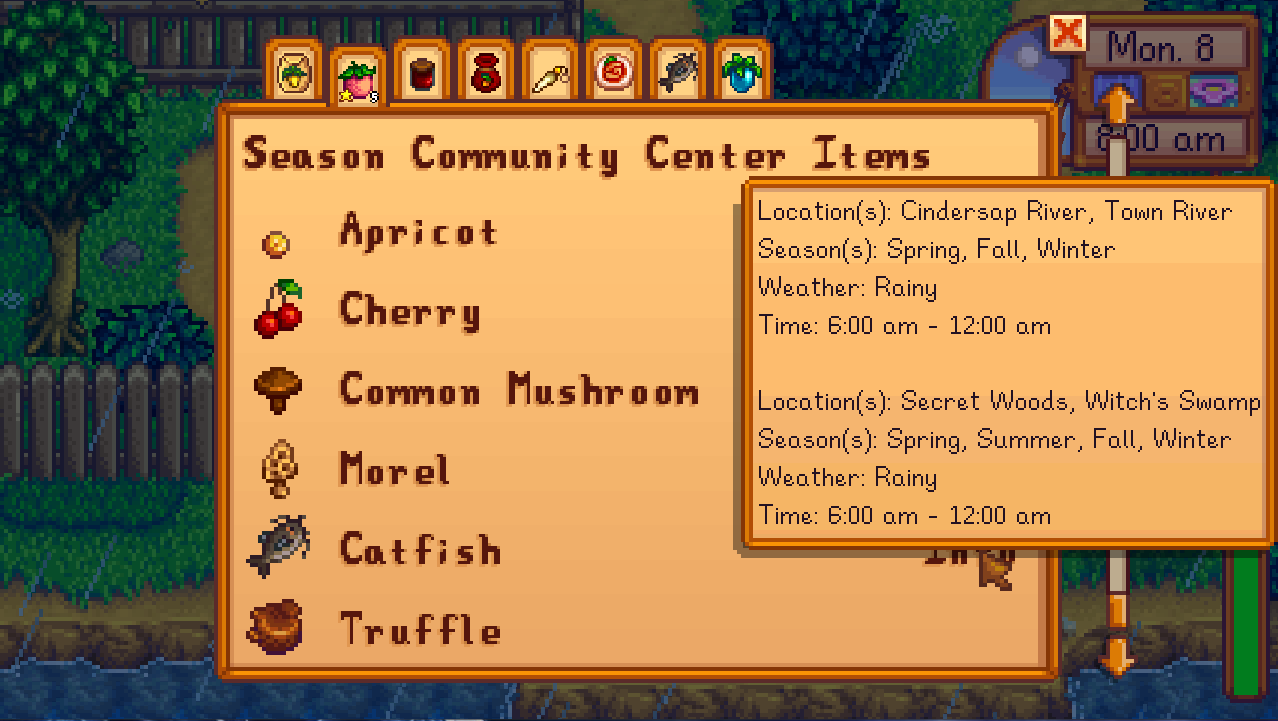 In the screenshot here, it was raining in game. The game informed me that catfish are available to catch while it rains and where and when to catch them. There were two other fish that were exclusive to rainy days, but I'd already caught them thanks to this mod. The catfish is just really hard to catch. 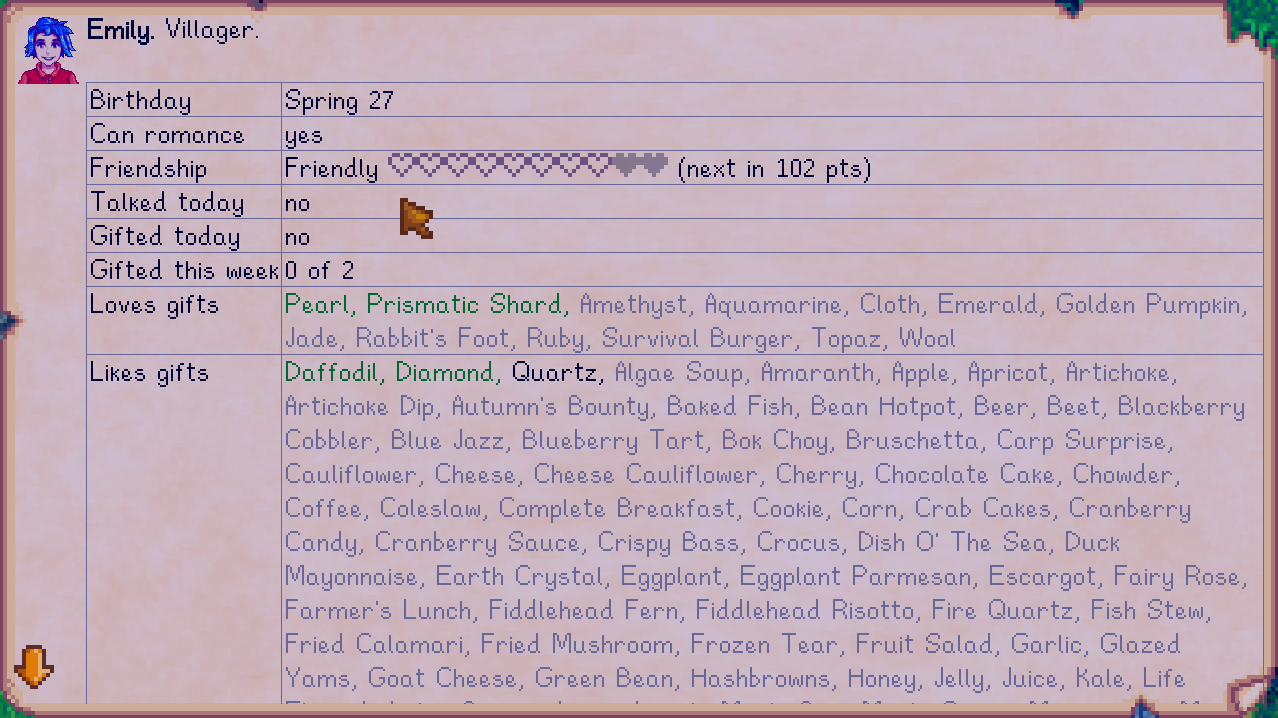 With the lookup anything mod, all you need to do is hover your mouse over anything, push a button, and the game will tell you all you would ever need to know about that person or plant. It tells you how friendly a person is to you, what gifts they like, and if you happen to have that item on you (the text will be green). For other items like plants, the game will tell you how long until it's ready to harvest, what recipes it can be used for, and who likes recieving it as a gift. With these last three mods I've completely removed any need for the wiki.

But I was on a roll, and there were two other mods that caught my interest.

I went a little farther than removing the need for the wiki. I started cheating. 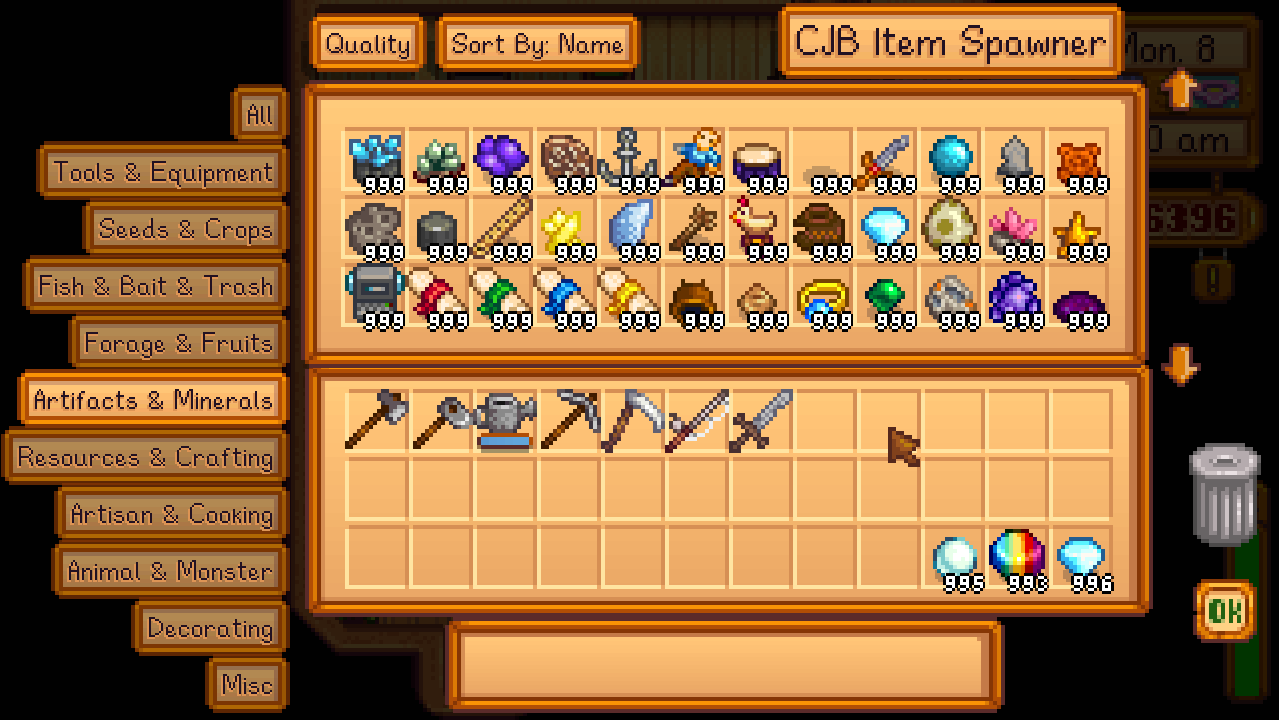 With the item spawner mod, I basically have an infinite resource of all items in the game at my fingertips. I've only used it to get the three universally loved items, pearls, prismatic shards, and diamonds, but it works with all items in the game if you are feeling sneaky. I didn't use it to sell them though, they are exclusively to be used as gifts. I used a different cheat to get a boatload of money. 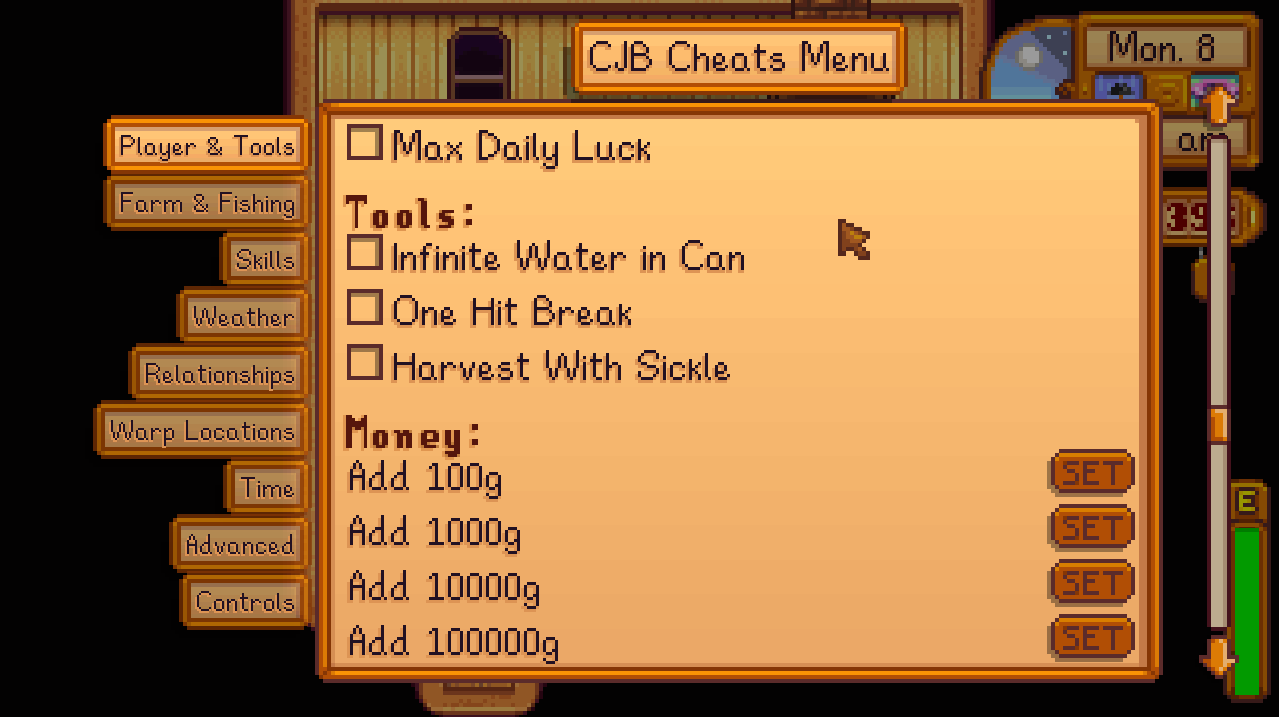 The cheat menu mod has so many cheats. So far I've only used it to give me 100,000 money right at the start of the game to invest into my farm, and I've nearly doubled my running speed, which is so nice. There's a lot more you can do with it though, you can use it to warp to any location at any time, set it so that fish bite instantly and don't put up a struggle, make any villager have max hearts for you, manipulate the time of day, and control what the weather will be the next day. It's pretty expansive, but like I said, I ignored most of that to just get a head start money wise and run around town at super sonic speeds.

It's so nice to play Stardew Valley without needing to have the wiki open in another window. I've found myself playing for hours at a time, just running around the valley giving gifts to everyone and fixing up the community center at record pace. I even managed to get Leah to dance with me in the first festival, which usually isn't possible. Am I a dirty cheater? Yes. Yes I am. But I'm also so relaxed.