Happy Halloween Destructoid! Band of Bloggers lurches on, on this most harrowing, and frightening times of year. Around every corner lurks monsters, demons, and the ghosts of past failures. The ghost specifically interests me, and has been a popular figure around the world for centuries upon centuries. So what exactly make ghosts tick? Where do they come from and why do they haunt the living? If we go by the sacred lore presented in the 1995 cinematic classic Casper: The Friendly Ghost, we learn that the spirits of the living remain earthbound because they have unfinished business to attend to in the land of the living. If we were to all suddenly die tonight, perhaps on the Witching Hour, perhaps due to some kind of horrible microwave-based accident, I propose that all of us would be bound to this mortal plane! This month’s prompt exists as a means to help one and all deal with their Unfinished Business! 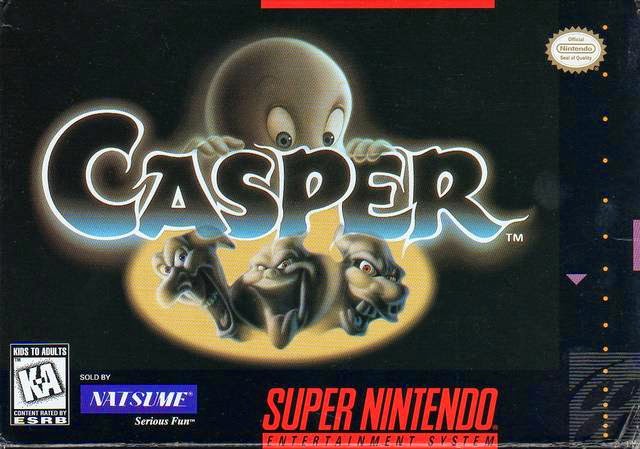 (I didn't know this existed...also, it's by Natsume so it probably isn't terrible!)

Each video game requires a certain time commitment if you want to beat them. There are some games that are considered endless; games like Minecraft, Animal Crossing, and The Sims for example, where there is always more content to seek out and engage with. Those games can be pushed to the side since those don’t have a set endgame and can conceivably go on indefinitely. The kind of games I’m thinking of here are usually narrative focused; games that can last tens, if not hundreds, of hours. We all have lives to get to, and there are times when we make that compromise: I’m going to put this game down tonight, come back to it tomorrow, and continue on. Then life happens, or another game launches, and the next time you go back to a previous game you find that several weeks or months have passed and you’ve completely forgotten where you are, what you need to do, and how to control your playable character. This month, I’m encouraging you to go back to those games (or at least one of them) and finish what you started. Here are some examples from my own backlog!

The Final Fantasy Series: Over previous months, when my friends here at BoB have posted their prompts, they usually give a few examples. I’m going to do that too but my first example is made up of multiple games that I’ve picked up, put about a dozen or more hours into, and then moved away from. Over the past 3 years, I started playing Final Fantasies II, VI, VII, VIII, IX, X, XII, and XIV. In that time, I beat VII, and X. I love the Final Fantasy series but, like an unruly goose, other games have swooped in and stolen my attention. The most egregious example for me here is Final Fantasy VIII, which I’ve never completed at all. In the past, I’ve completed every other main, non-MMO Final Fantasy, but for me, Final Fantasy VIII is a game that I’ve always enjoyed while never being able to actually beat it. This is due to either technical issues or some other outside influence taking my attention away from it. I’ve never finished Final Fantasy XII either, but I don’t have nearly as much of an attachment to that game as I do VIII. Besides, I’ve heard it said that once you find the Seitengrat, FFXII is basically over anyway, and in that case I’ve beaten that game 6 times over on my most recent playthrough. (I'm probably going to play this one...Or IX, I dunno, this is the most recently launched one)

Dragon Quest Series: The Nintendo 3DS is a fantastic JRPG machine! Thanks to its backwards compatibility, it’s possible to play really solid remakes of Dragon Quests IV through IX. That’s a half dozen entries of this legendary series represented and playable on a single device! Like with Final Fantasy above, I’ve actually started a few titles in this franchise, but I’ve only ever finished one of them, the first one. Aside from the first entry, I’ve put over 10 hours into Dragon Quests VII, VIII (on the PS2), IX, and about an hour or two into the demo for Dragon Quest XI. These later games in the Dragon Quest series take dozens of hours to complete, and according to Howlongtobeat.com, Dragon Quest VII takes over a hundred! I could probably get through that this month but it would likely be the only game I play if I were to take it on.

(I haven't even beaten the demo for this damn game!)

Super Mario 64: Yeah, I’m serious: I didn’t want to load up this list with nothing but JRPGs but I don’t think you were expecting me to admit that I’ve never actually beaten one of (if not, THE) the most important platformers of its time. As a kid, I had a Nintendo 64 and Playstation, but I didn’t own very many platformers since I was more into arcade games and RPGs. I loved Ocarina of Time, but I didn’t even really care to play Super Mario 64. Then, earlier this year, I fell in love with Yooka-Laylee, and thanks to those two I feel my horizons have been expanded somewhat. Will I go back and give Super Mario 64? Well, thanks to the DS version and my housemates having an N64, I absolutely could!

(In all seriousness, how many games that you played as a kid did you actually beat?)

Opus Magnum: Have you guys ever heard of Zachtronics? It’s an independent games stupid headed by Zach Barths which specialize in puzzle games. Opus Magnum, the one Zachtronics game I’ve played thus far, presents its puzzles as a mix of Ford-style, industrial automation with clockwork and uses alchemy as its theme. You’re presented with a blank field to work within, a limited number of alchemical resources, and as many mechanical resources as you need to create the desired product. This results in puzzles that can be solved in a myriad of ways, puzzles which you’re encouraged to keep playing around with so as to optimize your solution into something as efficient, and cost effective as possible. It’s this level of fiddliness, and the addition of more nuance, even where I am deep in chapter 3, that has so far kept me from actually finishing this game. I want everyone to try this game, but more importantly, I NEED you to get it and be my friend on Steam so that I can compare my stats with more people.

(Look up GIFs of some of these puzzle solutions, it's insane)

Ghosts are all around us, especially if you live in Washington DC or New Orleans. There’s nothing you can really do about those ghosts, but I’m positive that if you’ve made it this far, and if you play games regularly, you’ve put a game down without finishing it. Maybe this month will be the month you go back to those games that you’ve set aside and finish them. If you do, and you feel compelled to write about the experience, make sure to tag Band of Bloggers, or BOB, or BoB, and include that in the title of your blog post. Happy Halloween everyone!