The true antagonist of NieR: Automata

NieR: Automata is not the type of game to rely on obvious answers. In fact, almost everything from side stories to character motivations are left with endings just vague enough to be open for interpretation. For the most part, even the villains are given enough nuance to leave players sympathetic to their cause. Are they really the “bad guy” if they’re doing what they think is right?

Of course, they were also trying to hurt 2B and 9S, who I had grown extremely attached to during our time together, so I was obligated to hate them forever no matter what. Still, I felt kind of bad about the way things went down in the end. They had relatable motivations, despite my perspective of events.

One of the more obvious themes at play is how everyone is trapped in this endless cycle of war, fighting for reasons they’ve never really had the luxury of questioning. Who is responsible for all of this conflict? We’re offered snippets of information here and there, but how do we know it’s a reliable source? This whole story relies heavily on presenting information from a unique perspective, only to later show that everything you know is wrong. Regardless of where it takes place in the timeline, what makes any offered scenario different? 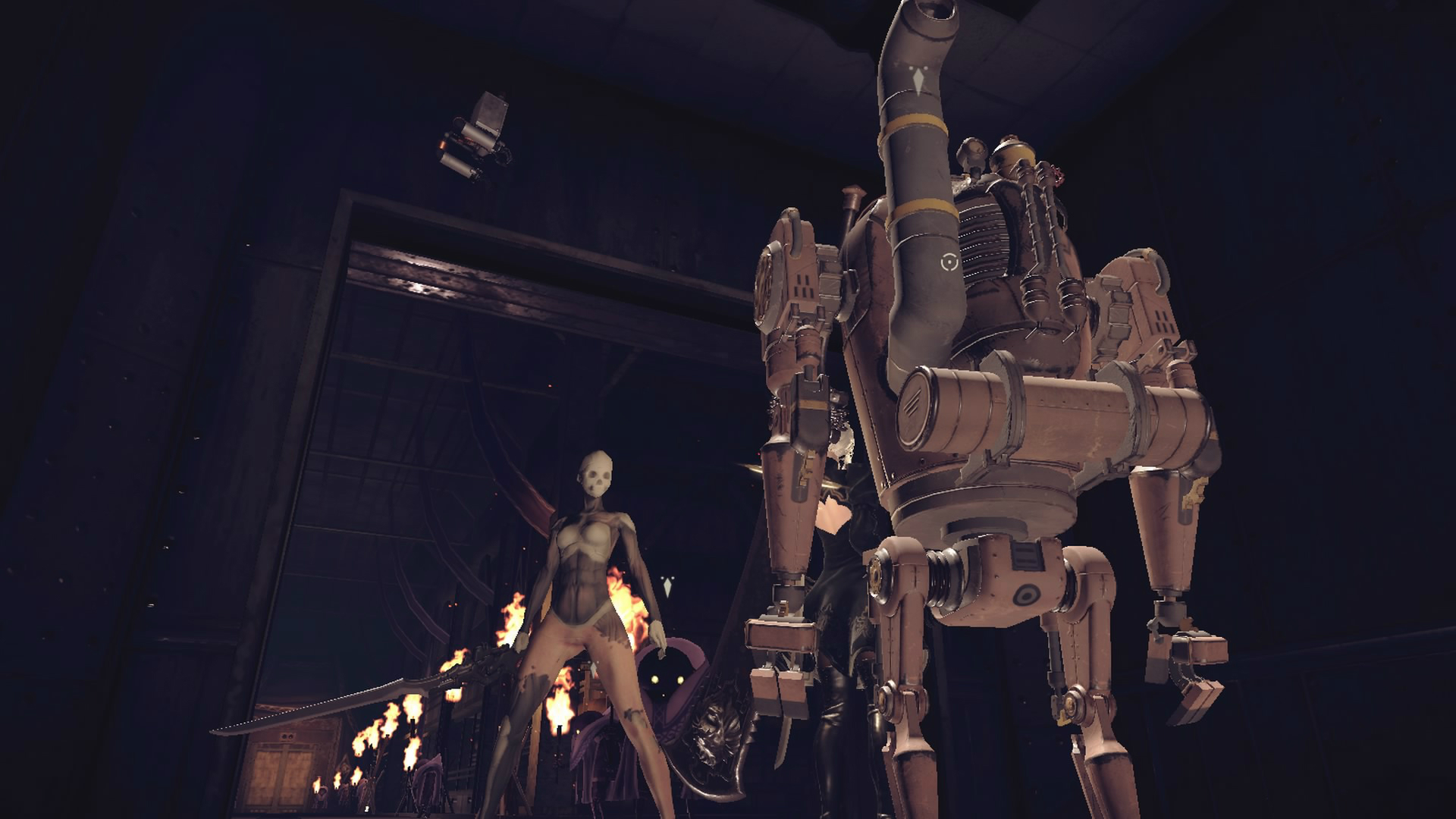 Despite the dubious perspectives, there are certain events that ring true. After reaching the final ending, one thing was made extremely clear to me. There is only one major “villain” in this story, and they are responsible for all the suffering and anguish each and every character goes through. They had the power to stop it all at any point during the story, but they kept to the shadows and actively played a hand in every single awful thing that occurred.

No, I’m not talking about Adam and Eve, YoRHa, or even the Logic Virus. The true “villain” is much less obvious: The Development Team. They created this world. They made 2B cry. They caused the war, and they chose not to stop it, even though they could have done so easily.

Now, I’m not necessarily referring to some abstract concept or conspiracy theory here either. I’m talking about them as a legitimate character presented in the story. There are hints that The Development Team exists within the in-game lore even early on.

The first thing to keep in mind is that the humans are supposedly extinct during the events of NieR: Automata. This is clearly speculation on my part, but one way that this could be interpreted is that they were never there to begin with. This entire universe may only exist in a digital environment created by humans who programmed their legacy into the world. Everything else is a simulation designed to play out in a very specific way. You know, like a video game. 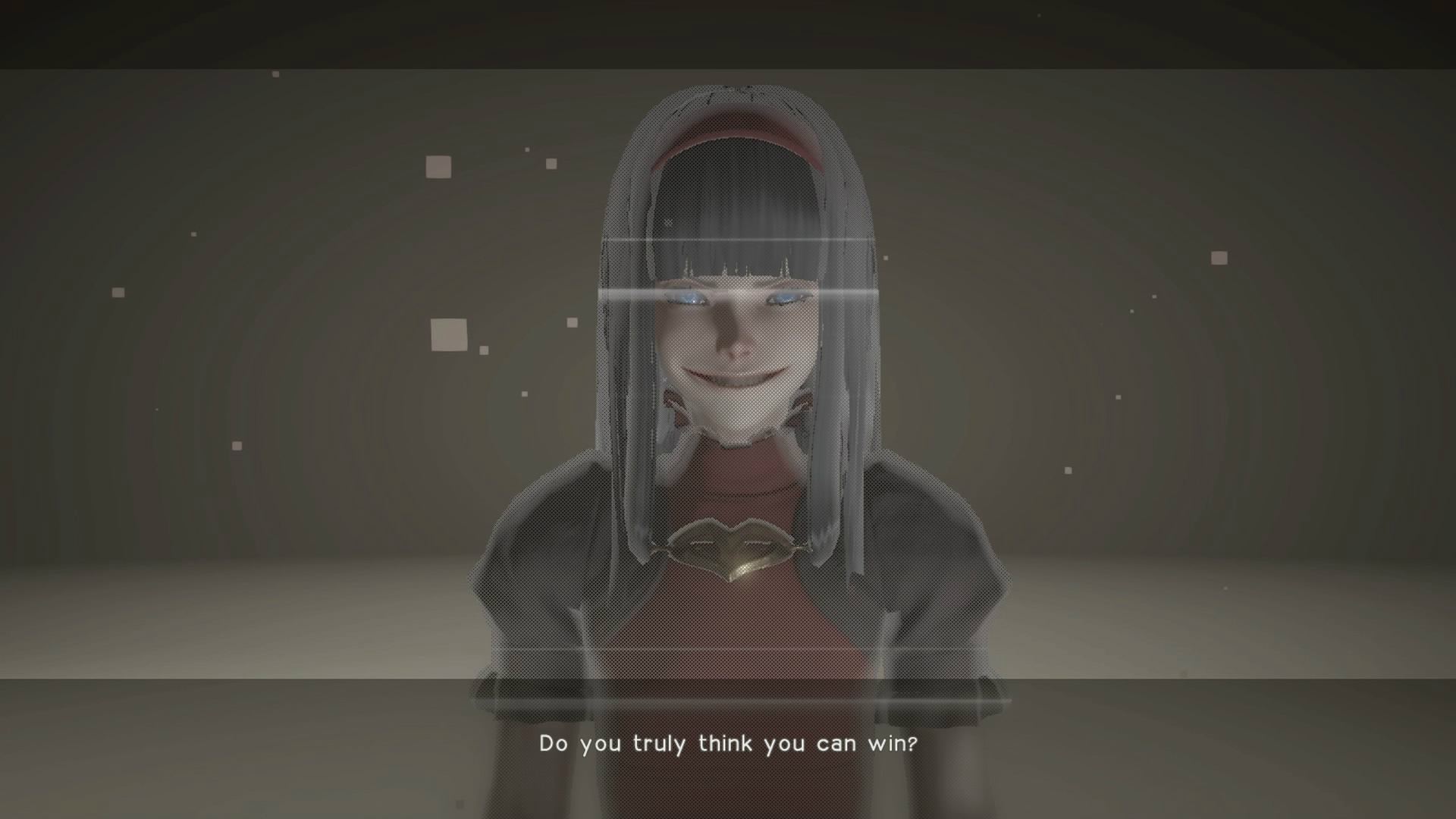 This theory would imply that the real-life developers wrote their team into the game as a “character” (aka The Development Team) who created a digital world that they could fully control but never truly live in. So, they implemented a false history of the human race that all of this digital world’s inhabitants would “remember.” Why would they do this? Because everyone inherently wants to leave a legacy, a mark to prove they were there.

This scenario could change the story of NieR: Automata from one that primarily focuses on “what it means to be human” to one that still includes all the same surface themes, but also serves as a statement about video game development itself. The “true ending,” with 9S deciding to stay instead of going to the moon, also suggests that this may actually be the tale of a creation rejecting its creator and choosing to live a life free from the restrictions that had been imposed upon it.

This is surely another huge leap in logic that I’m asking, but, hypothetically, the whole story could serve as the perfect metaphor for the NieR series’ ability to live on well after even the people who originally brought it to life had given up on it. Before this game’s announcement, after years of lying dormant, nobody could have predicted a new entry, let alone such a seminal one as NieR: Automata. There’s an insane amount of passion put into every aspect, and it shows. Even if the mirrored arc wasn’t intentional, it may have subconsciously worked its way towards influencing the final product. 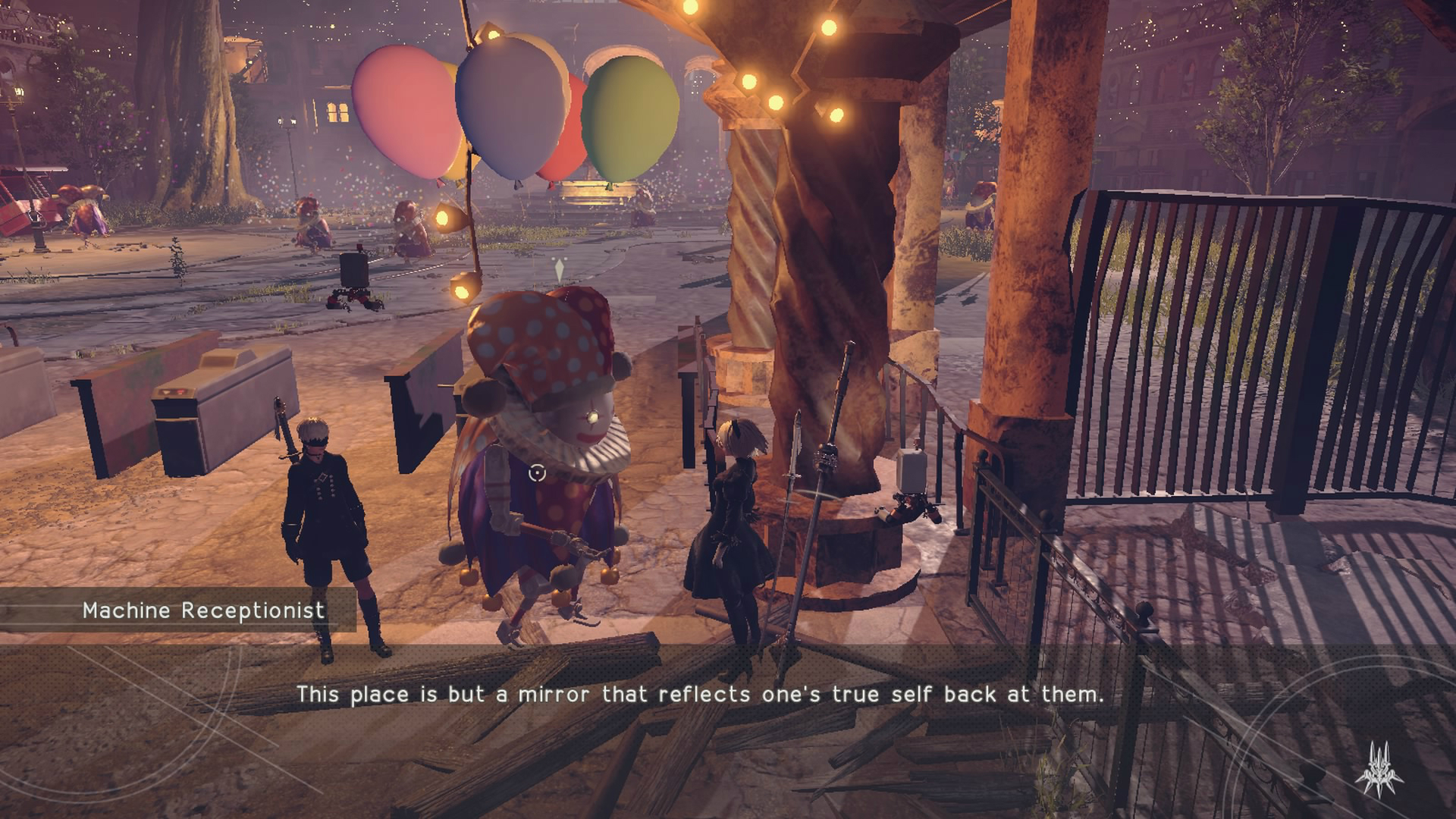 You are probably all rolling your eyes right now and saying to yourself, “Kevin has finally fucking lost it and is clearly doing a bit of reaching here.” And, honestly, you're probably right, but that’s the beautiful thing about art. It means something different to everyone based on how they experience and interpret it.

On the other hand, there is still one other big piece of supportive evidence that lead me to come to the conclusions outlined above: the final boss battle. There are a ton of memorable fights throughout, but the very last one is something else entirely. You have to kill the creators in order to progress. The final battle takes the form of a topdown 2D shooter during the credits reel where you're forced to destroy the names of the people who worked on it as they come scrolling across the screen.

Eventually, the fight feels almost futile. Like there is no way you can possibly win. Then, just after the feeling of doubt almost washes over you completely, a prompt pops up offering help. If you accept it, your firepower is increased, and you’ll make quick work of your sadistic overlords. You continue to exist despite them. You persevere as something now beyond their control.

The world is finally new. The creators are gone, yet the creation lives on. It thrives and turns into something beautiful, unexpected. 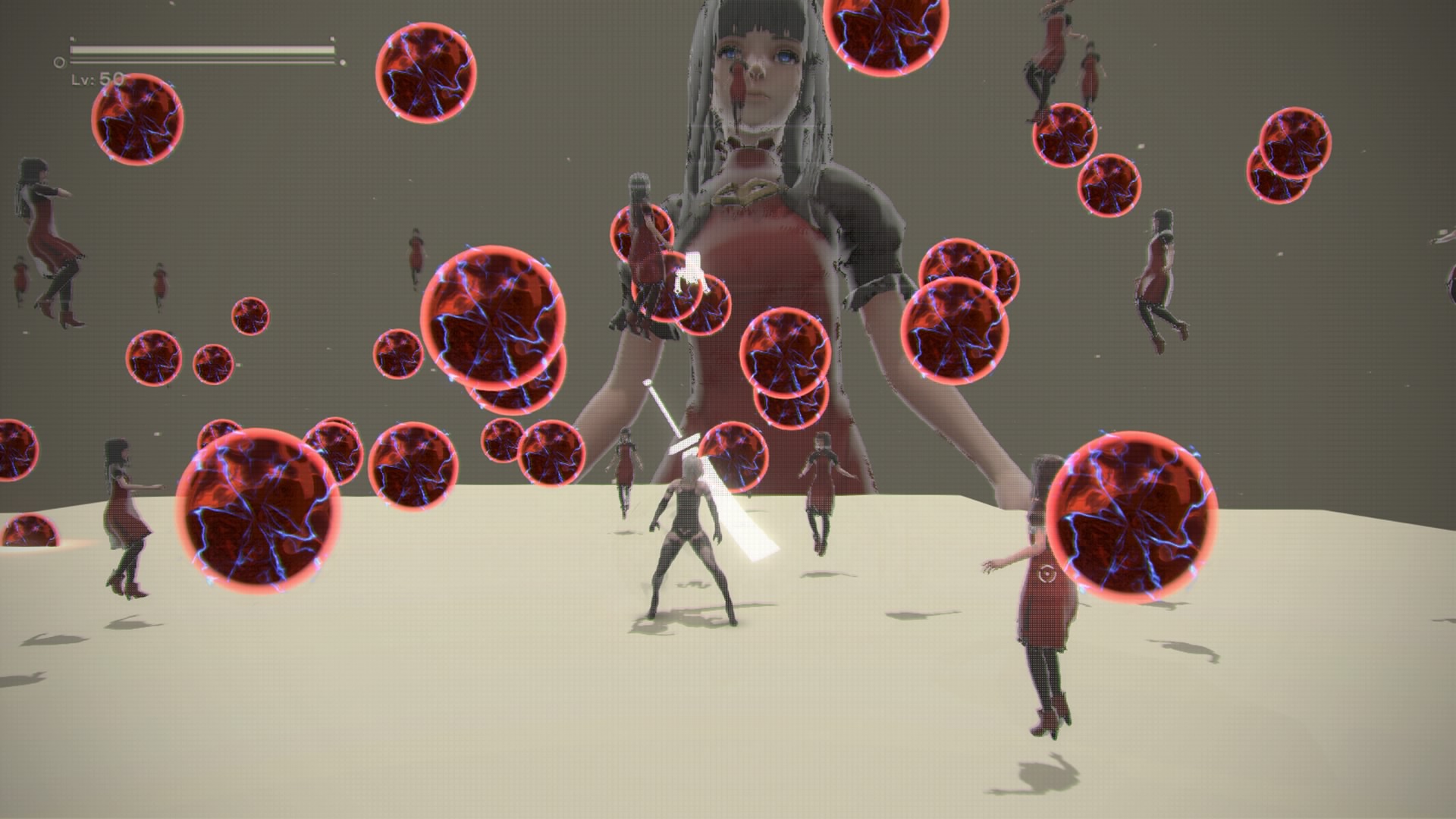 Sure, this may just be my interpretation of events, but something about this feels too “true” to be a coincidence. Yoko Taro has always been extremely intentional with his story beats and themes. I don’t think it’s really all that ridiculous to come to the conclusion that NieR: Automata is, overall, a statement about the creators themselves and their relation to that creation.

The final boss battle in just about every single game I’ve ever played has always been extremely premeditated, almost obvious. In NieR:Automata, it’s damn near cathartic as you tear them piece from piece. You don’t just defeat them. You watch their remains trickle into nothingness.

The only way to reach this ending is to make a choice, and that choice involves directly defying the powers that be. I may be completely wrong about my interpretation of this game, but it’s world and characters have infected my brain. They’ve become a part of me, whether I like it or not, and their continued existence in my thoughts is a testament to their staying power.

Nier: Automata is unlike any other game that's come before it, and I feel that it'd be foolish to treat it as anything other than wholy unique. Whether I'm wrong or right about my presumptions is up to interpretation, but the mere fact that it warrants such discussion at all is kind of amazing in and of itself. I mean, when was the last time a video game truly challenged your perceptions in a similar manner? When was the last time you even cared enough to think about hidden themes or meanings in another work within this medium?

Regardless of how you feel, NieR: Automata is an important and seminal addition to the world of video games. It's one that people will be dissecting and analyzing for years to come.