Command & Conquer was received with praise, both from critics and the public. It was clear for Westwood that they had succeeded in creating something special and endearing. The gameplay and setting were the perfect foil to Blizzard’s Warcraft, and both series had a bit of a rivalry going on in the following years. Not to be outdone by them, a year later Westwood released its next game, officially making Command & Conquer a franchise. But rather than continuing the Tiberium timeline, they opted for a prequel, that ended up becoming its own universe. And it all began with a simple question: what if World War II, had never happened? Ironically, the answer is, World War II.

Now first things first: You know when I said that if you had the Ultimate Collection you could ignore the CNCNZ guides? Yeah, scratch that. I’ve been avoiding to use Origin as much as I can for this but since I was already using it to play Titanfall 2 already, I figured I might as well see what the differences are. Using the most scientific methods available, I have determined that the Ultimate Collection is shit! It doesn’t support anything for the old games! I knew they weren’t compatible with mods but it goes so much deeper than that! You’re locked into a crappy 800x600 resolution that, while authentic to the times, makes things like the sidebar a pain in the ass! So let’s do this right this time. Here are the steps:

With that outta the way... Welcome back, Commander.

C&C: Red Alert is set some fifty years before the events of Tiberian Dawn: In 1946 just after the end of WW II, Albert Einstein invented time travel. No, no stay with me, it’s great I promise. He goes back in time to 1926, shakes hands with a young Hitler which removes the to-be-dictator from the timeline. Back in the new present, without Hitler, Stalin is unabated in his quest for power and takes the USSR in a war to conquer all of Europe. Nice job Einstein.

Now, I didn’t talk about the plot of Tiberian Dawn and for good reason. It’s simple but it gets the job done. Red Alert is gonna be a different story. This was conceived as a prequel, but I have a few problems with that idea, and for the longest time so did Westwood. The existence of Red Alert 2 later down the line makes everything even more complicated. So let’s talk about that!

On the Soviet side, as the new commander you and Stalin commit copious amounts of war crimes, from nerve gases to the killing of civilians, all in the name of a unified Europe. Alongside Stalin is his secretary/mistress Nadia and two other generals but don’t get too attached to them. Over the course of the campaign, Stalin orders the killing of most of his generals, gets drunk, gets laid, and then Nadia gets him laid six feet under, as it’s revealed that Kane was the mastermind behind Joseph all along, and the Brotherhood of Nod was controlling everything behind the scenes! Oh, and also Kane kills Nadia because… Reasons? All things considered I actually really like this story, it paints Kane as a master manipulator that is hell-bent on making Nod a powerful force by any means necessary, and that he already had this ambition way before Tiberium was even a thing on Earth. And by Odin’s glorious beard, Gene Dynarski did a phenomenal job as Stalin! Goofy, menacing and everything in between, he delivered it all with grace!

The one problem this plot has is the time frame: Tiberium only fell on earth in the late 1990s and the events of the series only go further and further into the future. By the time of Tiberium Wars, it’s been a good 101 years since Red Alert so unless they’re implying Kane really is some immortal vampire and that he foresaw the coming of Tiberium (Nadia does say that the Brotherhood will tire of the USSR by the 90s), this whole thing doesn’t really work and going forward the idea of this being the root of the Tiberium universe is mostly ignored.

That leaves the Allies and what do you do here? Well, you rescue Einstein, do a little bit of guerrilla fighting, blow up some bridges, use Soviets’ own weapons against them, more rescuing, stop a missile from blowing up Britain, siege Moscow and leave Stalin buried under rubble with a handkerchief stuffed in his mouth. Guess the Soviets aren’t the only ones into war crimes. Good job Commander! The hints towards Tib Dawn are way more subtle in this campaign, the only thing they imply is that the Allies would eventually become the GDI and that’s it.

I was surprised to find out how serious and sometimes dark the whole story is. It has all this goofy technology inspired by real-life conspiracy theories like Chronospheres and Iron Curtains while also having missions dedicated to breaking the Geneva convention. Still, I enjoyed this one a hell of a lot more, it has just the right amount of campy and serious, perfectly balanced like all jokes should be.

So how’s the gameplay then? It’s basically the same thing as Tiberian Dawn, just adapted for a more grounded setting. For the most part, units and buildings are reskinned and repurposed: Obelisks of Light became Tesla Coils, Tiberium became Ore and no longer kills infantry, and so on. The overall strengths are inverted here, the Soviets are the ones bringing in some serious firepower—with durable tanks and a lot of aircraft—while the Allies have some sneaky tactics like Spies that can only be detected by dogs and a tank that can lay down mines. Things like the campaign and sidebar follow the same structure, so I don’t feel the need to repeat myself here. Unlike Tib Dawn’, RA had two expansions, both are essentially mission packs, but the Aftermath package brings in new units for both sides and has CGI cutscenes. 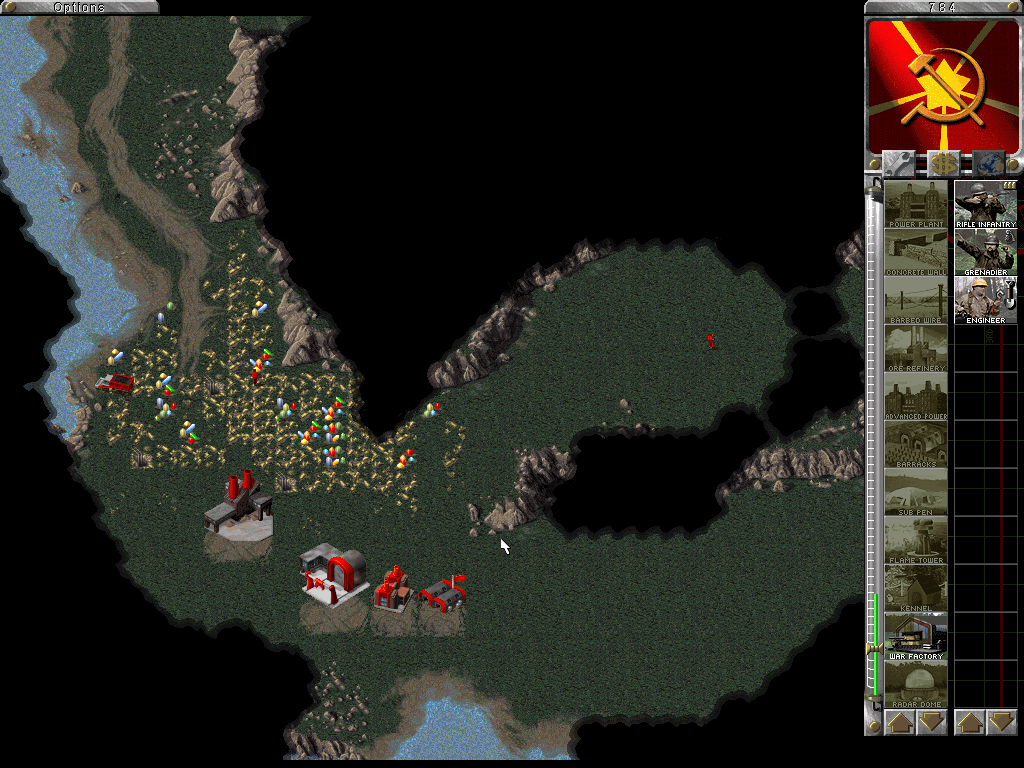 Now the music, sweet Jesus the music! I have to say that overall I like Tib Dawn’s soundtrack better, the bar it set was too high and I don’t think RA manages to clear it. But then Hell March starts playing and all is forgiven, Frank! Arguably the most iconic song in the history of the franchise, Hell March sets the mood like nothing else. The thicc bassline at the start coupled with the samples of marching troops, followed by the heavy guitar riffs that start and never stop. And then there’s the vocal sample at the start that nobody can agree on what the hell it says. I cannot do this song justice with words, you just have to listen to it yourself.

I enjoyed playing RA more than Tib Dawn, thanks to a combination of being more used to quirks of the engine, experience, and the CNCNZ patches that allow for some very welcome quality of life features.  Worth mentioning that I found the difficulty to be about the same, but it ramps up way sooner than Tib Dawn’s, much to my frustration. In one particular Soviet mission, my only anti-air was SAM Sites and two Mammoth Tanks. Guess what the enemy favored when attacking me? C&C continues to not fuck around, kids.

Red Alert didn’t push the franchise forward by a lot. The whole game feels like Westwood wanted to relax and make something fun on top of what they have done before. And they absolutely succeeded. The whole prequel idea was not bad but it needed a bit more thought to fit, but at the same time I’m kinda glad things turned out this way otherwise, we might not have gotten Red Alert 2 as we know it. If you couldn’t tell already, I wholeheartedly recommend the game. After this, the C&C series would lay low for a while. Outside the expansion packs and a port for the PS1 called Retaliation, it would be awhile before the world got to see the true evolution of the franchise.

And what an evolution it was.

Brazilian man born and raised. Currently working on a series dedicated to the documentation of the local gaming culture and landscape that I call “Brazil Of Games.” I took the name from an old TV series on the subject that aired a long time ago here, but no trace of it exists on the Internet.

[*] The first real installment, where I explore the origins of the world's first digital-only console, the Zeebo. And why it failed. [Slightly outdated. New version below]

[*] A follow-up of sorts to the previous blog, where I explore Brazil's most revered game: Top Gear!

[*] Every story has a beginning. Here's to the game that created our whole gaming industry, Amazônia! May we always remember where it all started.

[*] Happy 20th anniversary PlayStation 2! Here's to the console that changed everything!

[*] In December 2000, one RTS almost put Brazil in the Triple-A gaming market. This is the unfortunate story of Outlive.

[*] Brazil's Independent Games Festival is a celebration and showcase of gaming in Latin America. Here's the best Brazil has to offer in 2021!

[*] 12 years later, we revisit the Zeebo console. This is an “expanded remaster” of my original blog on the subject, back in 2019.