Traveller In Playtime - Spyro The Dragon

Spyro the Dragon is a 3D platformer developed by Insomniac Games and published on the Playstation by Sony in 1998. It was later remade by Toys for Bob in 2018 in the Spyro Reignited Trilogy, which was published by Activision on PS4 and Xbox One with PC and Switch versions planned for 2019. In it, the titular dragon has to step up and save all his fellow dragons who became trapped in crystal by Gnasty Gnorc after a few of them insulted him on live TV. 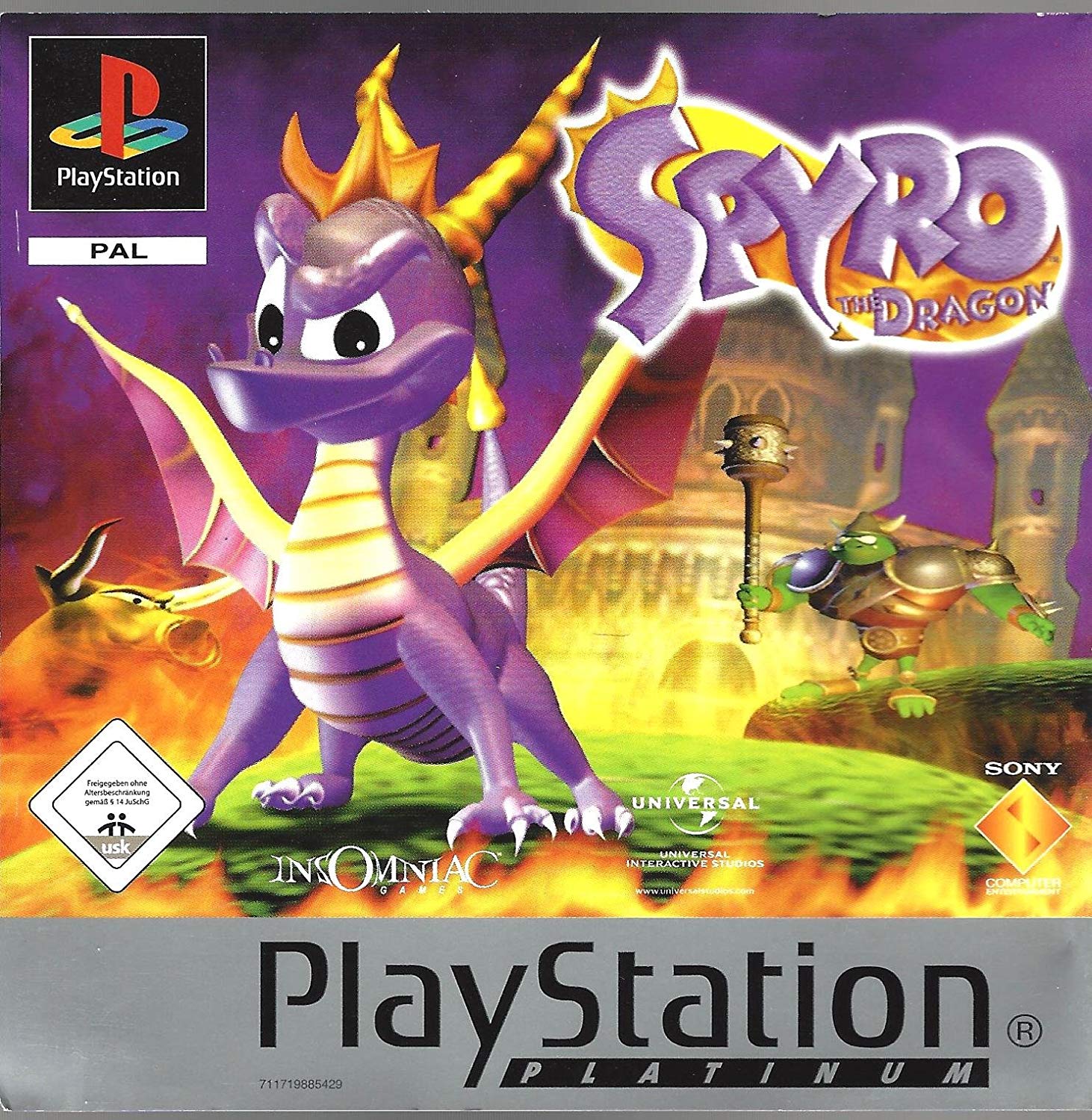 A Purple Dragon With Attitude...And Not Much Else

In that one sentence in the introduction, I described just about the entire plot of the game. It's common for games in the genre to have excuse plots, but with how much voiced dialogue there is in this game, you'd think there'd be more meat here. Of course, the majority of that dialogue is in quick scenes between Spyro and a dragon he has rescued where Spyro gets a chance to showcase attitude, maybe do a quip and receive some often useless advice, so they didn't exactly aim for high drama.

It works well enough, since you don't need much story for a platformer, but we don't even get a scene between Spyro and Gnasty Gnorc before the final boss, which makes their battle ring a bit hollow. There's not even any environmental storytelling to carry the burden of the game's narrative. The levels are well realised and themed, but it's difficult to even pretend that there is supposed to exist a dragon society in them. All the goons Gnasty Gnorc has created seem to fit the levels perfectly. Which makes sense from a development standpoint, since the enemies were made to fit the levels and vice-versa, but from a narrative standpoint, it's difficult to see them as anything but video game levels. They're good video game levels, mind you.

Each world in the game has a distinct theme based around the occupation of the dragons meant to live there. The actual levels then take the theme (dessert warriors or mountain magicians, for example) and either puts a spin on it or subverts it. The enemies also keep with the theme (hence my earlier comment about them fitting the levels better than the dragons you save), making for some rather memorable levels, even if a few can bleed together slightly.

Helping the presentation is the tech on display. While enemies are often lacking textures and are essentially hued heaps of polygons, I can't help but admire what was done with 1998-era technology. Each level has a unique skybox and some basic lighting to help set the mood and feel of the level. But what's really interesting is the level-of-detail streaming put in place of rendering fog. 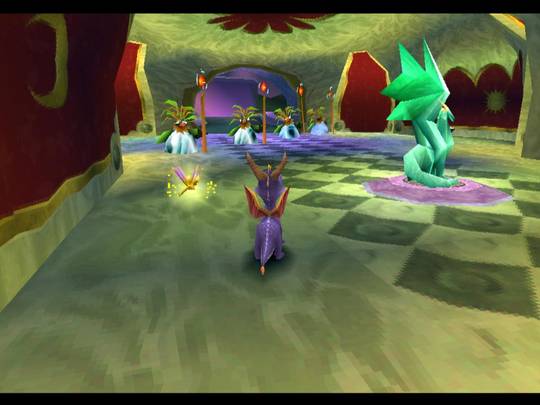 The geometry of a level has multiple layers of detail that gets changed depending on your distance to it, with the most basic version always being visible. It's a common thing today and isn't as gracious as it can be in modern titles, but it's such a welcome addition when you're exploring 3D environments. And even though the game uses obvious pop-in to load everything that's not geometry, the distance from which the pop-in happens is quite good, so it isn't as jarring as I've seen in other titles. And in a show of mercy, the gems you collect keep their shimmer even at a distance, making them easier to find even if they aren't fully rendered.

While the game isn't seemless from start to finish, the way loading screens are done helps maintaining immersion. When you load up a save file, enter a portal to a level or use the balloon to traverse worlds, the game never cuts to a normal loading screen. Instead, it keeps Spyro animated as he travels either across a black void or the skybox of the level you're entering. This presents the illusion that the game world is cohesive, which I welcome.

Somebody Called The Police

I can't talk about this game without bringing up the amazing work Stewart Copeland did with the music. Thanks to his background and the space allotted to music on a CD, each level is given a unique track with influence from progressive rock and jazz. It's full of soft drumming, synths and guitars, making for a very unique soundtrack, especially for the genre. I don't know how many times I've listened to the title and credits themes, they're just that great. Now, why he decided to reuse the theme of Wizard Peak for the Amanda Show on Nickelodeon is beyond me. I was beside myself when I noticed that.

Doing Things Only A Dragon Can

The controls and abilities of Spyro are essentially unique to the Spyro games (save for it's one proper imitator, Muppet Monster Adventure). Spyro can jump, glide, charge forward and breathe fire. A large part of the levels consists of flat planes with a few floating platforms to traverse here and there. As such, there isn't much exciting platforming to be done. Instead, you'll be charging across the levels until you hit a ledge or an enemy. It gives the game a focus on speed and forward momentum, which makes for a unique feel compared to other 3D platformers, which are usually slower and more focus on precise jumping. 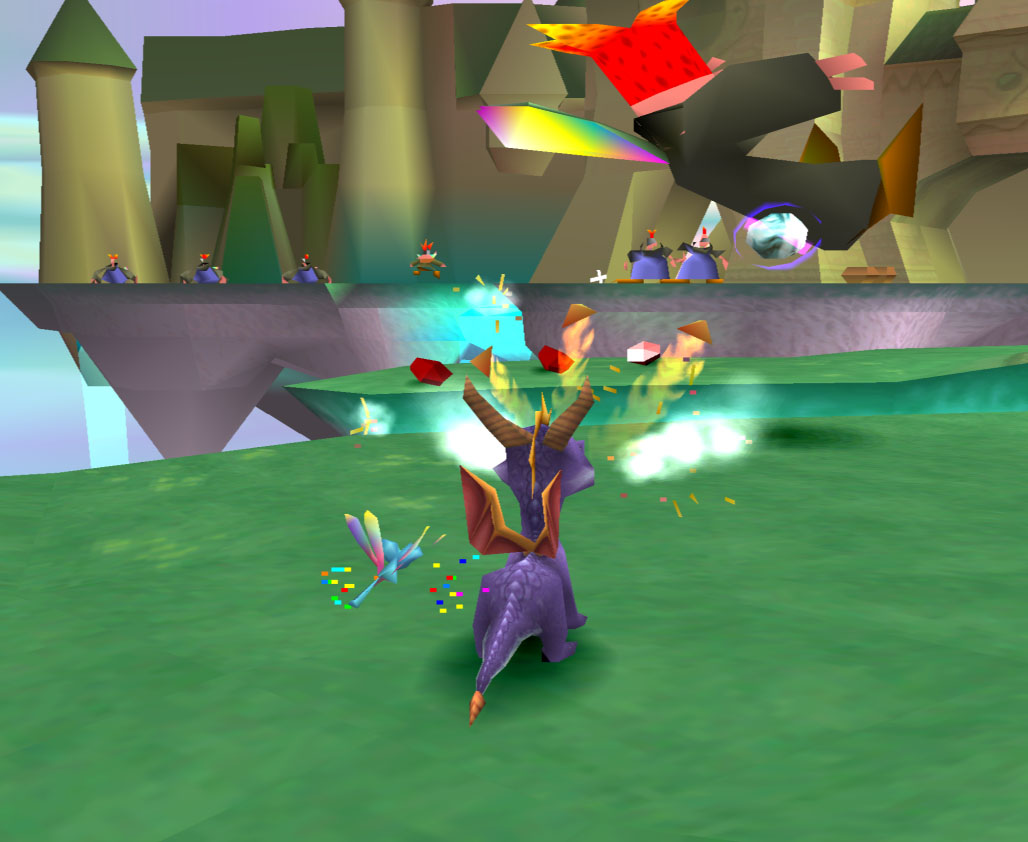 This way of designing levels might be due to how Spyro handles. He has a rather wide turn radius, so he isn't fit for complex platforming. Not to mention that the camera is a bit janky, so split-second jumping decisions just wouldn't work. To make sure there are some complex actions to take, we have his glide, which is a simple challenge of timing and aiming. It is simple to do, but if you start gliding when you shouldn't, you are bound to fall into the numerous death pits in the game.

Combat is as simple as in the first Crash Bandicoot. You only have two attacks, the charge and Spyro's flame breath. Enemies are either susceptible to both, only one or need something else to be defeated in rare cases. It's very simple to read what enemy is weak to what, since the design language is so uniform. Small enemies are weak to everything, large enemies only to fire and shielded enemies need to be charged. After understanding what to use, it's just a simple matter of attacking them fast enough and not missing.

It works to keep the pace up, but unlike in Crash Bandicoot, the bosses are quite lackluster. They barely register as bosses, since they are so simple to take down. Not to mention that all of them run away from you, making it seem like they're either giant cowards or you got to them before they could prepare themselves.

I like all of the small interactions within each level between Spyro, the environment and the enemies. Sometimes, you can flame an object in the level just for fun, sometimes enemies fight in pre-scripted animations before you go too close and sometimes you get to use a local small gimmick in order to fight special enemies. They're all simple interactions, but they do a lot to make the levels feel dynamic and fresh.

A Dragon And His Gems Are Not Parted For Long

This being a 3D platformer of the fifth generation of consoles, there are of course a lot of collectibles to be had before you're allowed to progress to the next world. But thanks to the speed you can move at and the simplicity of the enemies, they are easy to collect quickly, especially since there are only really 3 types: Gems, crystallized dragons and dragon eggs

Gems are everywhere and thanks to Spyro's dragonfly friend Sparx, easily collected as long as you stand near them. Sparx feels like another thing meant to balance out Spyro's control scheme, which I appreciate. But even so, you are bound to miss a single gem somewhere and have to run around the level a bit before you find it. This is much less of an issue in the Reignited version, since you have access to the gem radar of the later games in that version.

Another way to get gems is to complete each world's flight level, where you're put on a timer and challenged to freely fly around and pass through rings and destroy stuff before time runs out. They can be a bit challenging until you figure out how best to navigate, but overall they're a pretty fun distraction. Same goes for chasing down the thieves who have stolen the dragon eggs.

Crystallized dragons are usually out in the open, but every few levels hide them away in halfway insidious locations, forcing you to really understand how the different paths and height planes of the level connect. And once the game introduces the super charge, the secrets become even more challenging to uncover, as it lets you jump and glide great distances. There are even times when you have to super charge multiple times in a row before you build up enough speed to get where you need to go, which is a really cool way to give depth to the exploration and platforming.