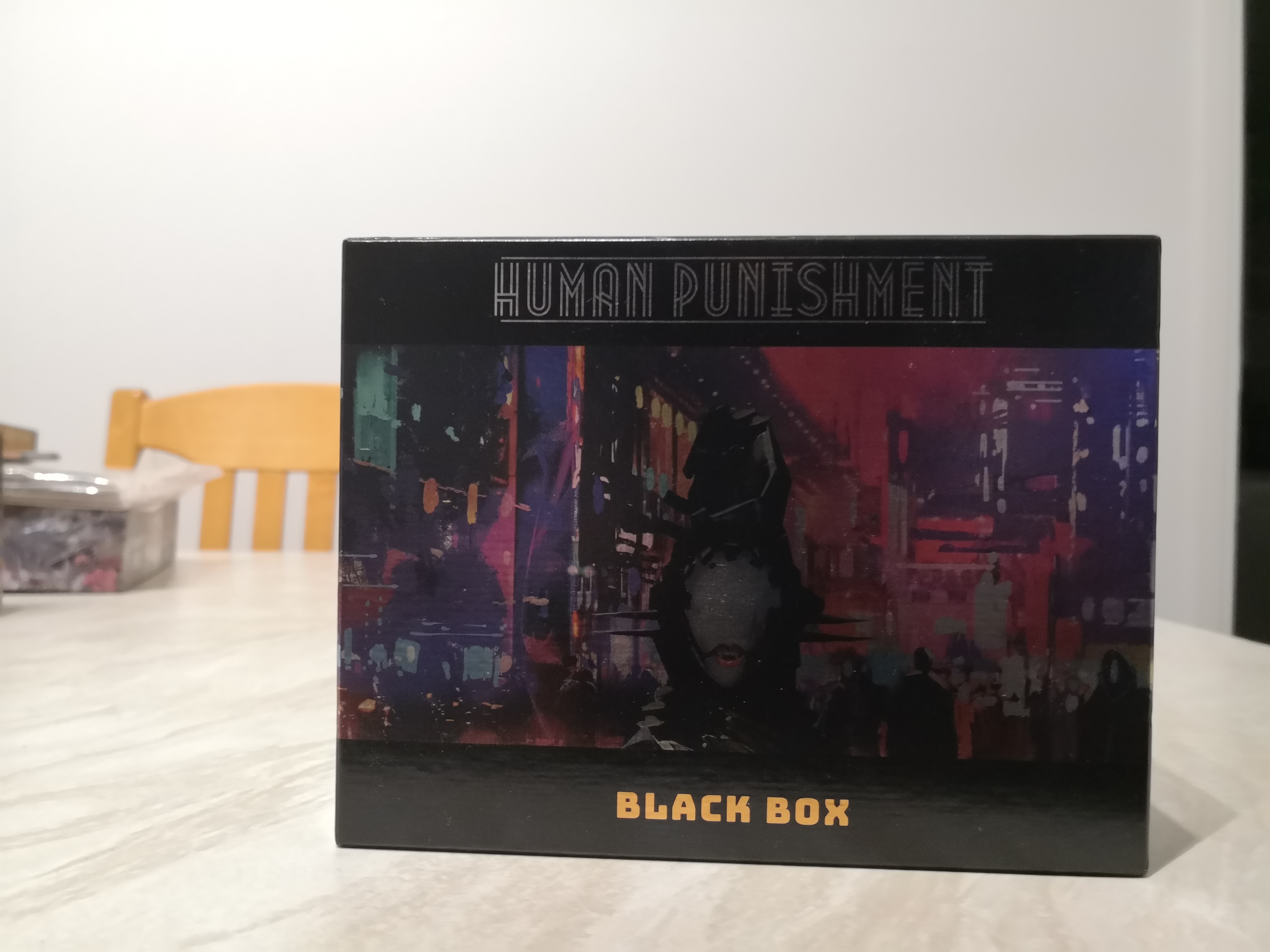 Pretty as a black box

Before telling my feelings about the game itself, I’ll give you quick rundown how the game works: before the game starts, players are dealt with two loyalty cards, one ID card and one random program. Cards have following functions:

In turn, players have three different actions to do in their turn:

Or if you have weapon equipped:

And we keep playing, sniffing people’s alliances, killing people where some might come back to game or not. Every time someone dies, the dead checks the winning condition, where: 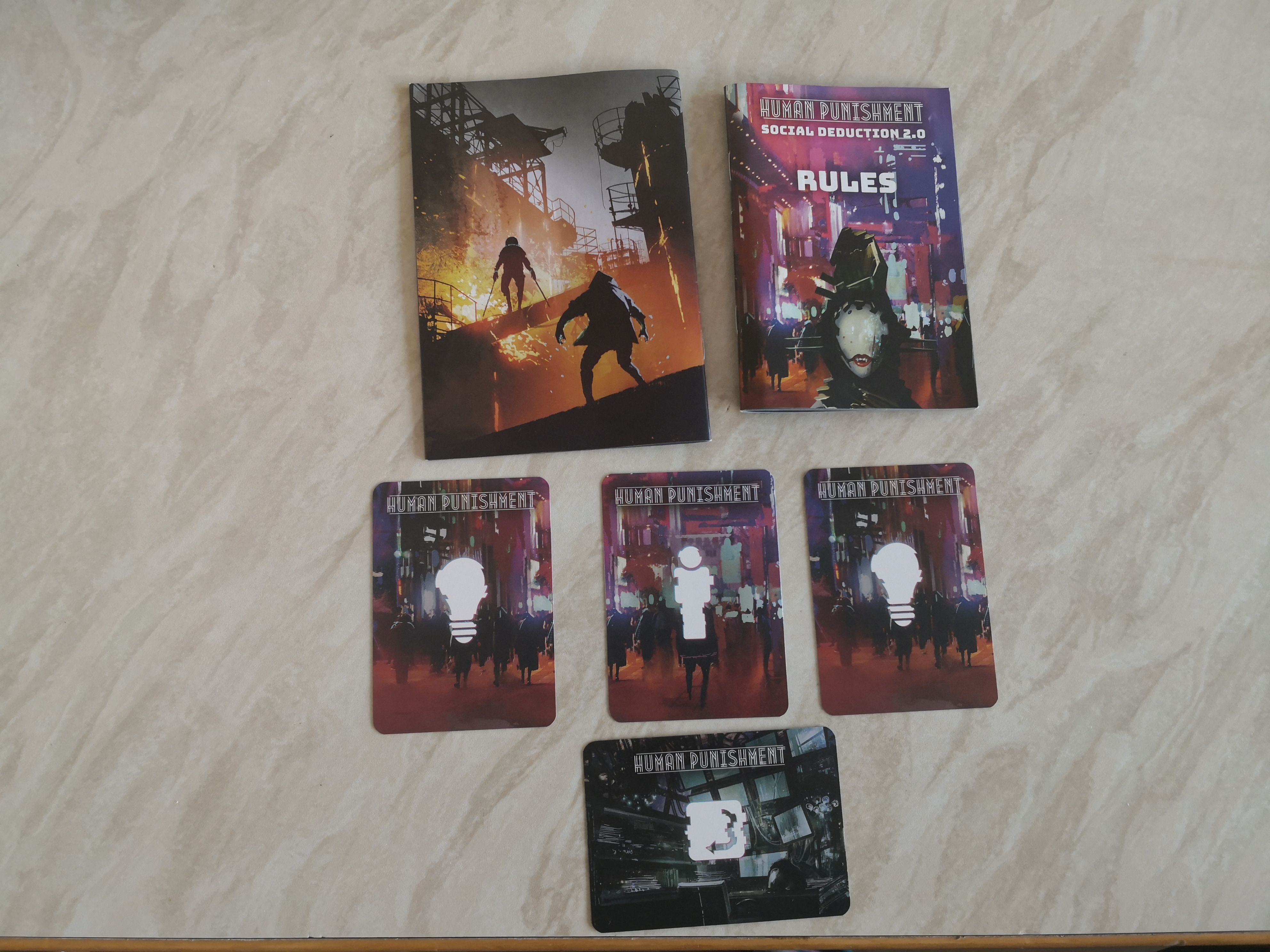 Your typical setup plus manuals

That’s the rules but how it plays?

My main experience from social deduction games is from BANG! with one random Ultimate Werewolf game, which are fine on occasion. Human Punishment deepens some mechanics compared to BANG! and gives the genre some cool twists themselves and huuugeee amount of variance; there’s over 20 different IDs, goddamnit!

In two games, I saw some clever uses of programs; for example, some player preventing death by using program which healed the player instead. Or shooting random people to make them reveal their Loyalties or make them take damage. One player takes permanent program which lets them use their action to steal a weapon from another player. Hell, hidden programs might change your team in the middle of the game, like what happened to me; I went from Machine to Outlaw.

In second game, we drew enough gates to summon a boss to our game; the boss dealt damage to player if they didn’t reveal their ID or Loyalty card. And my friend stole my Homeless ID and royally screwed up everyone else, sealing his victory.

Part of me wants to write more about this but two games with same people and same player count prevents me to do so. I can say that Programs are super swingy, but I need more playtimes to see how swingy they are in the end. I’d like to give it more goes with different people and larger player count, maybe upping it to nine (sixteen player sounds like a fucking mayhem).

But as were it stands now, I am impressed, real impressed. Definitely a good investment for a game which I purely bought for graphics so beautiful I’d love to put them on the wall.

That’s it for now, ‘till next time kids! 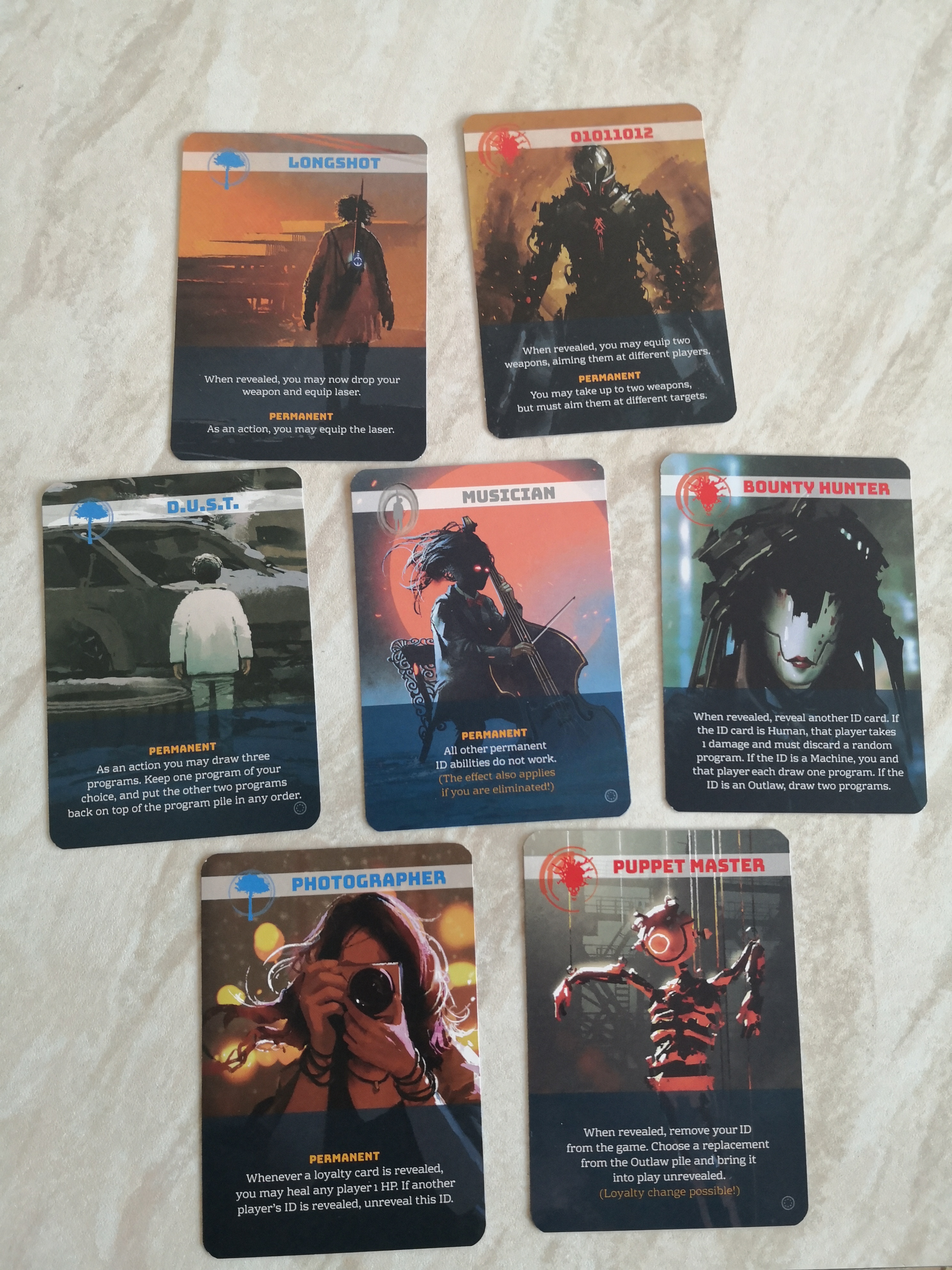 Gather around, concert is bound to start soon enough!

Ps. For future feedback, I’d like to ask you should I keep this current format (explanation of rules and goal, followed by my feelings about the game) or should I cut the “boring” part and gush about things I like or don’t like? Part of me feels like the rules explanation takes too long but on the other hand, without a proper context it seems hard to understand why am I gushing about the game at hand. So I’d like to ask  your opinion about this.

Destructoid lacks proper board game content. And that's why I create it. To fill the void and fill the need!

Social, radio-voiced little dwarf who finds board games, cRPGS and alcoholism fun enough to fill his days with them.

Currently writing about board games in his collection