"Well Finn, I can't say I know. I'm more of a, uh, Super Mario kind a' guy. Saving princesses and all that."

"Huh, really? All I know about it is that there’s like, a thousand wizard ladies fighting each other. Seemed like your sort of thing."

"Hold up, are you saying you've never played it?"

"Yeah, I only know what Jake told me. He keeps his copy in another house, so I've never seen it. Said I'm not old enough to 'get' it yet."

"That might be for the better… well, I've gotta' go get in costume for this thing Marceline is doing."

"Yeah, I have to go wait outside for a while. How is it gonna' take that long for Jake to hide one sword? This sounded like a small adventure."

"You never can tell what life's got in store for you. Anyways, wish me luck, and don't take too long. I don't think I'm going to enjoy this!"

"No problem, Ice King! I'll clear this dungeon faster than you can say 'jumbo-bumblies'! Off to wait I goooooooooo-!"

“Hey, Finn-! *Sighs* Oh boy… I don’t think this thing was meant to be put on alone. Hey, Gunter, do you see a zipper anywhere? Ah- uh… did the eyes just move?”

What If Adventure Time Was A 3D Anime Game? 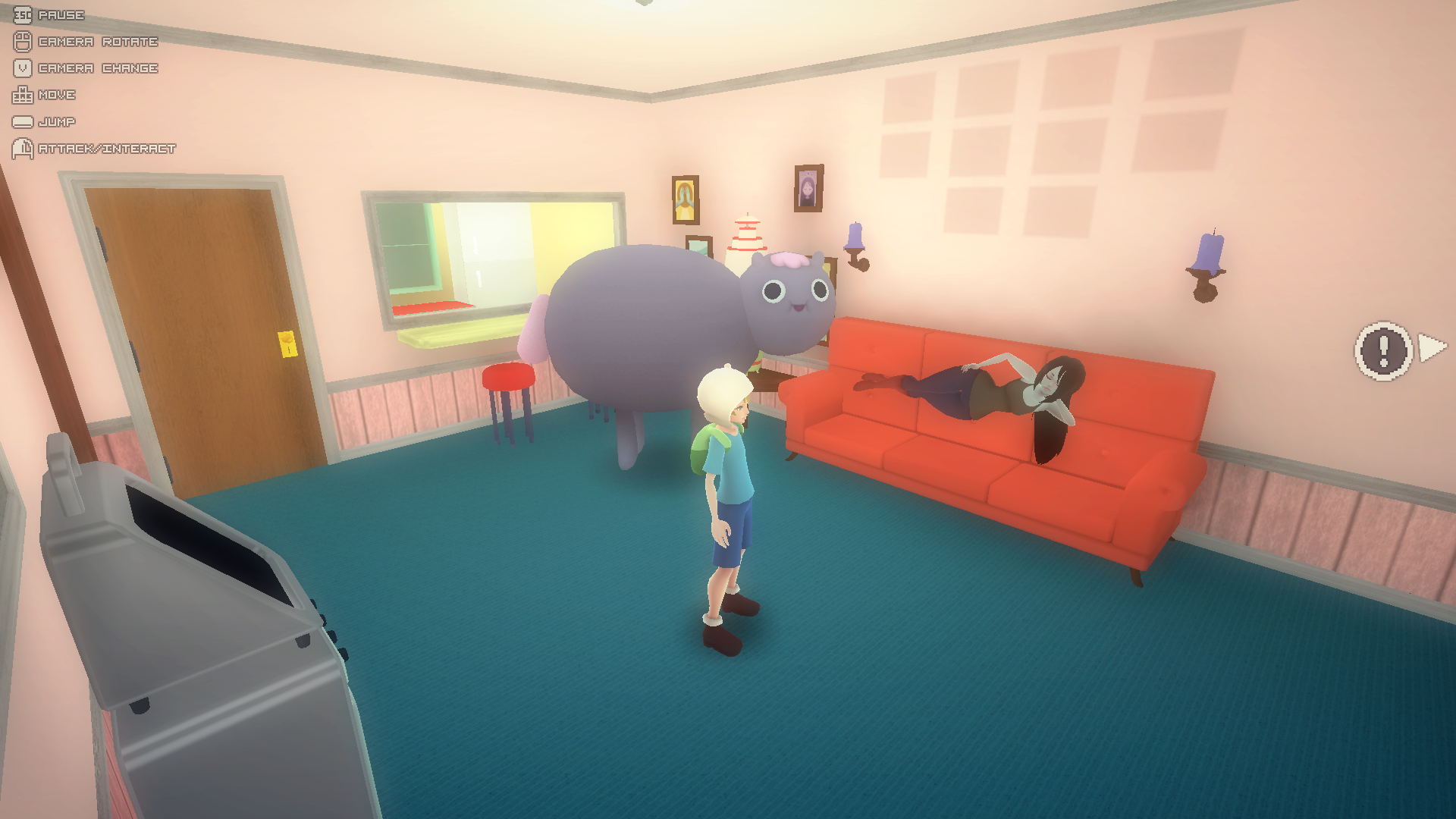 Welcome, one and all, to another installment of Freeware Friday! I've decided to go every week until the end of August, so you're gonna' have to put up with me regularly making noises in my dark little corner for a little while longer. I've got a very special game for you today - "special", in this case, meaning "unambiguously good"!

“What If Adventure Time Was A 3D Anime Game?” is the self-describing name of the day, and it's a lite character action/adventure game with more to it than meets the eye! And pornography, but we don’t need to talk about that. The Senran Kagura comparison was just to give you an idea of what it is; there's no musou hordes here - though there is more nudity, should you opt into it.

Instead, you'll be squaring off against a few small minor beasts n' freaks from the magical land of Ooo as you bring an anime’d-up Finn through Marceline's cave on a hunt for Jake. Along the way, you'll pick up some swords, do some cool dash-extended combos, solve a few puzzles, and find a couple princesses hanging around. Even if you're just looking at the initial 1-2 hour story, it's a very complete package - and again, there's more to it than that. 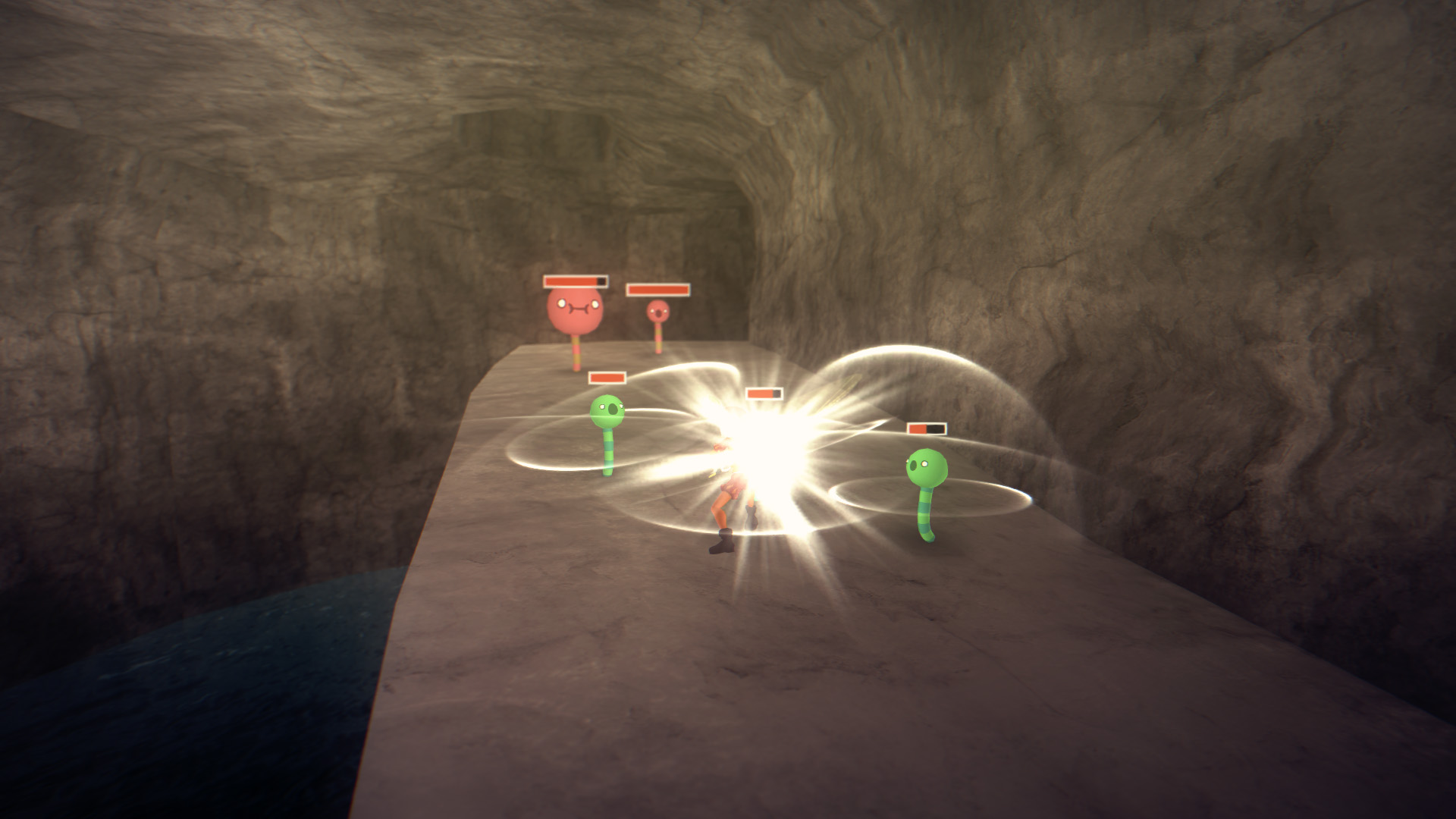 Combat is basic but snappy, with a 5- or 6-hit ground combo and a slightly shorter air combo. You can dash around and cancel your swings with dashes, and cancel your dashes with swings, and pretty much always be hustlin'. There is a stamina bar, but it’s more of a suggestion (and a punishment for getting hit). You unlock the ability to block a little bit in, and blocking comes with a dead-easy just guard (it's hardly "just")-into-counter.

You get everything you really need for combat in the "A-side" playthrough, though having the second and third (from the "B-side") sword abilities available at the same time would make the player feel like they have more options. Aside from that, your full moveset may or may not allow for simple DMC combos (I'm not one to know, but I suspect so), and some enemy shockwave-looking attacks reach farther upward than they look like they should. All in all, the fightin's pretty good!

The visuals have a unique art style to them that doesn't exactly match anything I've seen. Finn looks Kingdom Hearts-adjacent, the weaker enemies look ripped straight out of the show, and most of the other characters look like accurate 3D approximations of American visual novel art. I didn't expect to find a free 3D game that looks this good! And there’s a KH2-esque first-person mode you can mess with, which is always a hit with the goofballs. The writing, on the other hand, is more hit-or-miss. The game nails everyone's personalities, but relies heavily on innuendo and meta-humour, and has somewhat frequent grammatical mistakes. It's acceptable, even comfy at points, but the script could use another pass. 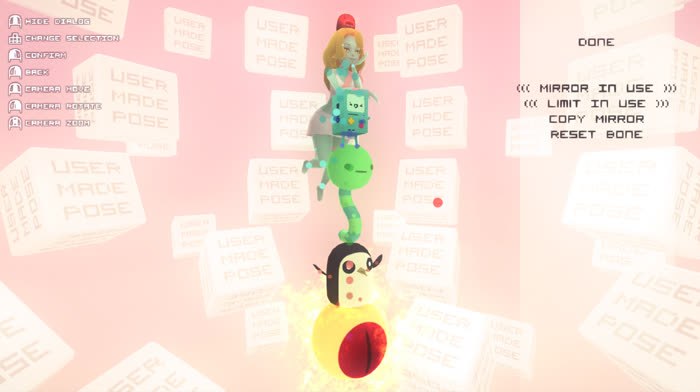 Now, you probably noticed my allusion to a B-side earlier. After you hit the credits - which shouldn’t take long, as only the final boss provides any sort of challenge - you'll find a "path" to the B-side. I won't say what this entails, but I will say that it is considerably more difficult than the A-side, and some new enemies feel ripped straight out of the later levels of a DMC game. Most of these fights are optional if you just want to finish the new story, but it gives action-heads a good, solid endgame to sink their teeth into. At that point, you'll also start to get into the bulk of the unlockable content, which will excite the aforementioned action-heads… and perverts. There's also a model viewer, and a 3D remake of an early episode that supports VR! This game's got a ton of stuff to do, so get crackin'!

And that's it for “What If Adventure Time Was A 3D Anime Game?”! I didn't expect to stumble on a legitimately great character action fangame in my hunt for freeware, but here it is! I'm looking forward to playing more of it when I have the time. And, eeeehhhhh... watching more than five episodes of Adventure Time. Yeah. That'd be good.

Next week, I'll be covering the demo of the Pokemon-like/metroidvania Monster Sanctuary, a project I intend to finish quickly enough to beat it’s Early Access arrival and Astral Chain’s manifestation on the physical plane. After that, the uploading schedule for this column isn’t gonna’ be consistent any more. I did good pumping out weekly articles for a month, but I feel like I need to pace myself a bit to balance all the aspects of my life. Even the “Friday” part of the title could end up leaving.

I dunno what comes next, but I surely haven’t run out of freeware, so I’ll be around! Thanks for reading, catch you next Friday!