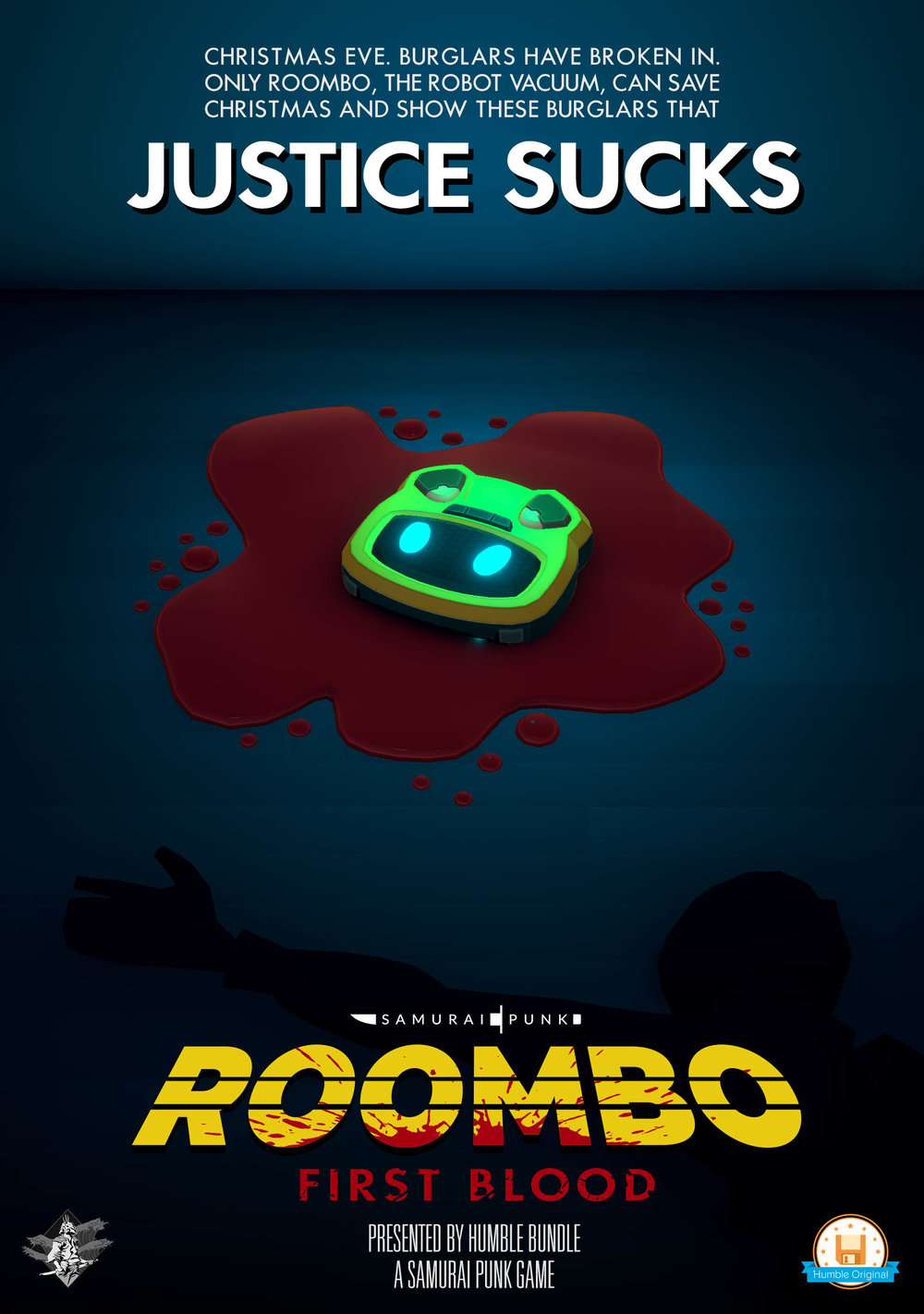 (Review taken from my own version on Steam, with a few changes)

'Roombo: First Blood' begs the question: What if you want a Hitman-esque game, but with an over-the-top slapstick tone, the gameplay (hacking) elements of Watch Dogs, and injuries capable of draining the whole blood bank at once that you'll have trouble cleaning it up as the bodycount increased? Well look no further, as this short experimental game might just sate a bit of that appetite.

It's premise is simple enough. You are a roomba whose owner drove out in the middle of the night, burglars breaks in the house in search of its valuables soon after, and you must prepare yourself to defeat these pesky burglars and add them to your meat-grinding collection local missing person list before they steal everything and gets away with it.

If you think this is tough, wait till you see me facing six of them.

'Roombo: First Blood' is a top-down stealth game where you, as a roomba must use your unexplainable hacking abilities to activate the numerous traps (everyday home appliances) in your home to stop the burglars on their tracks while trying to evade their line of sight, lest you prefer a harsh kick to the chassis (Three kicks, and you're down for good). Once all the burglars were dealt with, you have exactly one minute to dispose of all the bodies, pools of blood and footprints to add up to your result rankings.

Hacking in this game is simple enough, as when hacking mode is activated with time heavily slowed down, you just click on any highlighted objects to either activate harmful traps that stop them on their tracks, or traps that temporarily deter your pursuers from chasing you. You also have a honk ability that were surprisingly effective in long range, so you can either lure the burglars to somewhere else, or lead them to their (multiple) impending doom.

With every traps that stuns/kill the invaders, it resulted with their bodies splurting comically large amount of blood as they tumble down on the floor. And when your roomba sucks the blood off the floor, you'll fill the roomba meter, when being full gives it the ability to ram at the direction you want (and a kung-fu headband), be it to evade or inflicting damage on your target.

Time it right, and you'll stun/kill multiple burglars with one trap.

As far as controls go, the keyboard/mouse were a bit clunky as I had difficulty moving it to different rooms, especially on a walking-speed pursuit, and sadly you can't reconfigure the controls at the time of this writing. While the gameplay might seem to be more suited for a controller, its heavy usage of mechanics with a mouse makes it seemingly difficult to implement, at least for me. Although I did suggested another way to control your roomba on the discussion page: by either clicking it on the floor or drag-left-click the mouse around to move it.

Presentation-wise, it's pretty straight-forward. You'll be playing on the same house for all six levels (plus three more experimental levels upon completing the prior six), which can be repetitive to some players. I would say the house's level design were decent though, with enough room to move around, and layout simple enough to memorize for you to remember where the traps and hiding places were. The music isn't outstanding, but at least they aren't grating to listen to on every playthrough.

Oh, and the game allows you to generate GIFs of your gameplay, from up to 10 previous seconds per GIF. Most would prefer native video recording by now, but this small feature was welcome nonetheless.

Heard John Wick would like to have one of these babies as well.

All in all, 'Roombo: First Blood' is a pretty short game that'll took you less than two hours to played through all six levels and earn most of the achievements. But for the sum of 3 dollars, I'd say it's worth the price to play in short bursts.