An Admission by a Narrative Writer on Game Design

As someone who is drawn to unique stories and interesting characters, I sometimes find it hard to come to terms with the reality of how good games are perceived. It’s true we love our games like Mass Effect, Halo, Assassin’s Creed, KOTOR, Skyrim, and so on, etcetera, etcetera, but while these games do have incredibly captivating worlds, characters, and stories, there are more successful dynamics at work than just narrative. The truth is that narrative often takes a back seat in the development process, and for good reason. I hate to say that part. Unless there is a major emphasis on story design like the games that Telltale Studios and Remedy Entertainment are famous for, gameplay has to come first in most cases.

I picked up Assassin’s Creed: Unity when it was made free after the Notre Dame fire, and finally got around to playing it this week, which made me start to think about the necessity of narrative. The game was made infamous back when it was first released due to an overwhelming number of technical issues, and there are still many shortcomings that plague the game even today in build v1.5.0. It seems that Ubisoft just gave up on it and moved on to the next installment in their series. It’s a shame to me that this happened, because despite all of its faults, Unity is still a very charming game for someone like me who is fascinated by French history and culture. To their credit, Ubisoft actually put a lot of effort into making the city detailed, and historically accurate in certain areas. There is also clear evidence that they overhauled a lot of mechanics in the engine to make it feel “next-generation.”

The problem is that many of these things were simply not stabilized before release, and the game immediately turned audiences against it. When a game is perceived to be a technical failure such as in the case of Unity, one must ask the question of whether or not the story even matters anymore to most of the audience. When Steam released data on their achievements, it was revealed that a large number of players don’t even finish the games they purchase. This was of course very alarming to me as a narrative writer, because a story is all about hooking the audience and then maintaining interest long enough to reach an ending. I can’t imagine it being commonplace for people to begin a movie, book, or tv series only to leave it unfinished and to miss the climax of the story; and yet it happens.

So how can we have narratives like Game of Thrones that eat away at the heart and soul until we know the ending, but others are not worth having closure on?

In film and literature, the answer is simple: style and quality of narrative must be exceptional enough to make audiences stay invested. This however is not always the case in gaming, and I have a wonderful example of how fantastic gameplay made a hit and miss narrative completely acceptable. The Witcher series is one of the most beloved modern games out there, and CD Projekt Red (CDPR) has an army of fans chomping at the bits to try their next game. I however, had a difficult time feeling the thrills that others were so happy to express across the internet.

The Witcher 3 featured a blend of Monster Hunter and Dark Souls style gameplay, interesting enemies, the art was fantastic, the world was vast, and the engine is still very impressive. Despite these things though, I felt that the story and characters were very inconsistent and often just uninspiring. The premise was great, because we saw a father-daughter style relationship that was central to the plot. CDPR was smart to focus on a personal story that developed into a greater conflict, but can anyone really argue that the climax made sense? There’s so much unnecessary deception and Geralt was one of the most unenthusiastic characters I’ve ever seen. What bothers me the most though is that while the main story was extremely lacking, the writers for that game demonstrated their ability to craft wonderful personal stories in side quests and emotional cutscenes when they wanted to. These critical flaws seem to have been overlooked by most players though, because of the many other strengths the game had to offer. 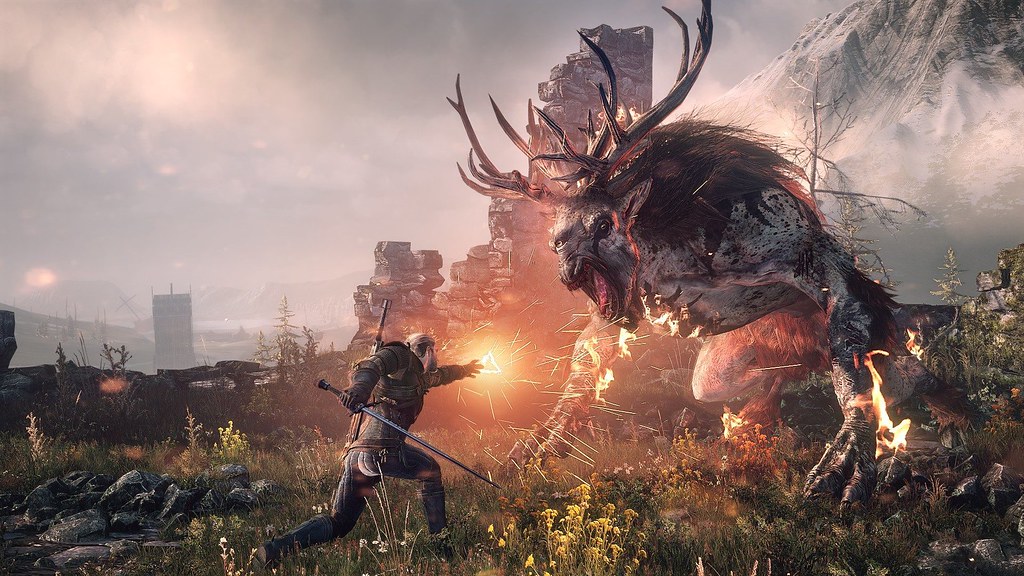 We don’t have to look much further to uncover other examples of mediocre narrative that is offset by the top-notch gameplay that really drives the sales of games. Call of Duty has been an industry leader for years, and until Black Ops 4, they published the game with some type of story included. Now Call of Duty has not been known for telling breathtaking stories, but they have always capitalized on smooth, 60 fps gameplay and a suite of interesting weapons and mechanics that can be utilized in zombie co-op and multiplayer modes. It could even be argued that their campaigns serve more as a gateway for beginners to build their skills and eventually transition to competitive multiplayer. The bottom line is that gameplay sold their games, and they made billions off of that simple strategy. Since 2017, Fortnite has been the new king on the block, and it doesn’t even have a story. What Fortnite does have though, is a large suite of weapons and unique mechanics, plus it’s one of the best optimized games out there. I easily get 4k60 on a 1080GTX. Other battle royales such as PUBG offer their own attractions, but they do suffer from technical problems that have upset many players. Whether you love or hate Fortnite, the quality of gameplay is undeniable.

Now can anyone tell me a story centric game that has made billions like CoD or Fortnite? There just aren’t any.

So from these examples, we can determine that while some mediocre writing is acceptable, underwhelming gameplay and glitches are critical issues that can make a player not even purchase a game to begin with. Performance, art, gameplay, and design must come first, but this does not mean that narrative is worthless or unimportant; it is simply harder to sell a game on narrative alone. What a story can do though, is emotionally connect with an audience in ways that multiplayer games never can. The problem is that stories take time to mature, and that is something that cannot be expressed in a short trailer or in a gameplay reveal. Any studio can make their game look great under controlled circumstances, but what really matters is when the product makes it into the hands of the audience.

We can partially blame this lack of concern for narrative on companies like EA, who have become so infamous for their marketing not matching the fidelity of their games, that audiences almost expect to be catfished by a flashy trailer. Even if the game has the best narrative of the year, many people remain sceptical about purchasing any new game unless they know they will at least enjoy the gameplay. There are still exceptions though of games that clearly sell themselves, based upon narrative appeal.

The Mass Effect series is a great example of how exciting adventures, interesting circumstances, and difficult choices can be the foundation for the game’s marketing. While the stories were a blast to experience, I found that the combat was just interesting enough to carry the player from one plot point to the next. By the time the combat does begin to get stale and redundant, the story ramps up in intensity to distract the player from the fact that they have fought the same enemies in the same basic circumstances for the ### time. Mass Effect succeeded not because the combat was amazing, but because it was good enough. Powers were well thought out, and there were plenty of styles that could be adopted to succeed in firefights.

Quantum Break was a game that featured an interesting story, but they fell short of any decent gameplay (see my article about combat in Quantum Break) and didn’t see anywhere as much success as the Mass Effect franchise. The powers were extremely limited and redundant, plus the weaknesses of enemies were easy to exploit. The shotgun and assault rifle were the most favorable weapons in the game hands down, because player could just spam damage on the weak points of frozen enemies with them. The game featured narrative choices that were meant to encourage repeat playthroughs, but from the gameplay I saw, it just didn’t look like any fun. Every level was fairly repetitive or full of missed opportunities for memorable encounters. The gameplay just didn’t warrant the grind necessary to get to the little bits of good story and acting.

Its sad that the game industry has suffered in this way as production costs have climbed over the years. Studios now have to spend way more of their budget on hiring programmers, artists, and testers instead of on proper writing teams. When fidelity standards weren’t as high, roughly 10+ years ago, writing was actually WAY better in AAA games. Studios like Bioware weren’t turning out technical and narrative failures like Mass Effect: Andromeda and we had stories like KOTOR instead. I’m hopeful that the future of gaming will eventually see a return to better narrative, because we now see companies like Epic offering great deals on the use of their engines and purchasable, high-quality assets from companies like Quixel. If various production costs can become more manageable for studios, there will be more room for writers to get in and craft better stories.