After playing and enjoying Guardian Heroes for a bit, a couple of people noted that the game was actually remastered for the Xbox 360 Live Arcade. That would technically disqualify this game from being reviewed as part of the Saturn Reviews series since a superior version exists at newer hardware.

However, that would have robbed me of the opportunity to enjoy this pretty good game. Usually, I am not a big fan of Beat 'em Up games. Yet, this was a great leap forward of for the genre, as it introduced some light RPG mechanics and a sense of character progression that I felt was missing from earlier classics of the genre.

Overall, even though there exists a better version of Guardian Heroes in the wild, I don't regret playing this game at all. 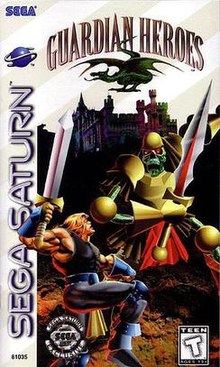 "This warrior is the one that will bring back light to this world of darkness!"

The game starts with four mercenaries who just discovered an ancient sword. These mercenaries, a grunt, a mage, a ninja, and a healer were apparently hired by a knight rebelling against the evil kingdom of the Khans.

Apparently, this group of merry revolutionaries didn't hide their movements well, as the Khan's soldiers immediately find the group and chaos ensues. In the middle of this escape, and just as the group is about to be destroyed, the ancient sword reveals itself as a conduit for an undead golden skeleton warrior, who saves the group. Suddenly energized by this powerful ally, the group find that they may be able to topple the evil regime of the Khans. 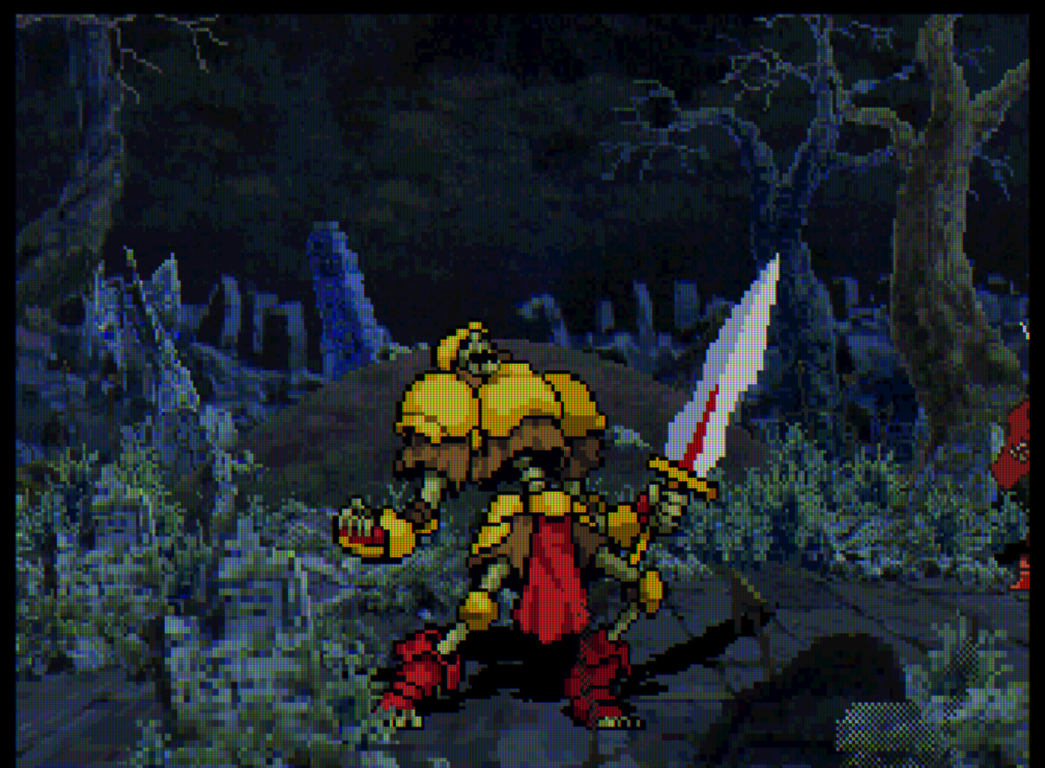 Not an evil character

This is a more involved story than is usual in the Beat 'em Up genre, with more character interactions and an expanding story. A central element behind that is the multiple paths you can take. For example, you can choose whether to go to the castle through the city or the forest. That choice may reveal different information about the various characters.

These choices culminate in five different endings, with even more side-content within these paths. For example, one time I finished the game without meeting a critical princess character. Other than the obvious replayability factor, these choices flesh-out the characters as you see how they react to different information and scenarios.

One thing that betrays the age of the story is dialogue, which, while not as bad as the standards of the time, is still lacking in some way. It simply sounds a little weird, and some of the terms are confusing.

Still, the story, even with the dialogue faults, is pretty fine. In fact, in the Xbox Live remaster, only the dialogue was fixed up without altering the story in any great degree.

"As a Knight, I must fight till the end"

The main gameplay mechanics of the game are similar to other Beat 'em Up games. You fight waves of enemies in a 2D field with multiple planes you can jump back and forth from. Combat involves a simple guard, normal attack, and strong attack buttons but also includes magic attacks. Special fighting moves can be triggered in directional commands as in fighting games, as can magic spells which is a superior way to use magic than choosing from a list as hordes close in on you. Overall, the fighting has an emphasis on juggling enemies in the air and utilizing your tools to trap enemies in devastating combos. 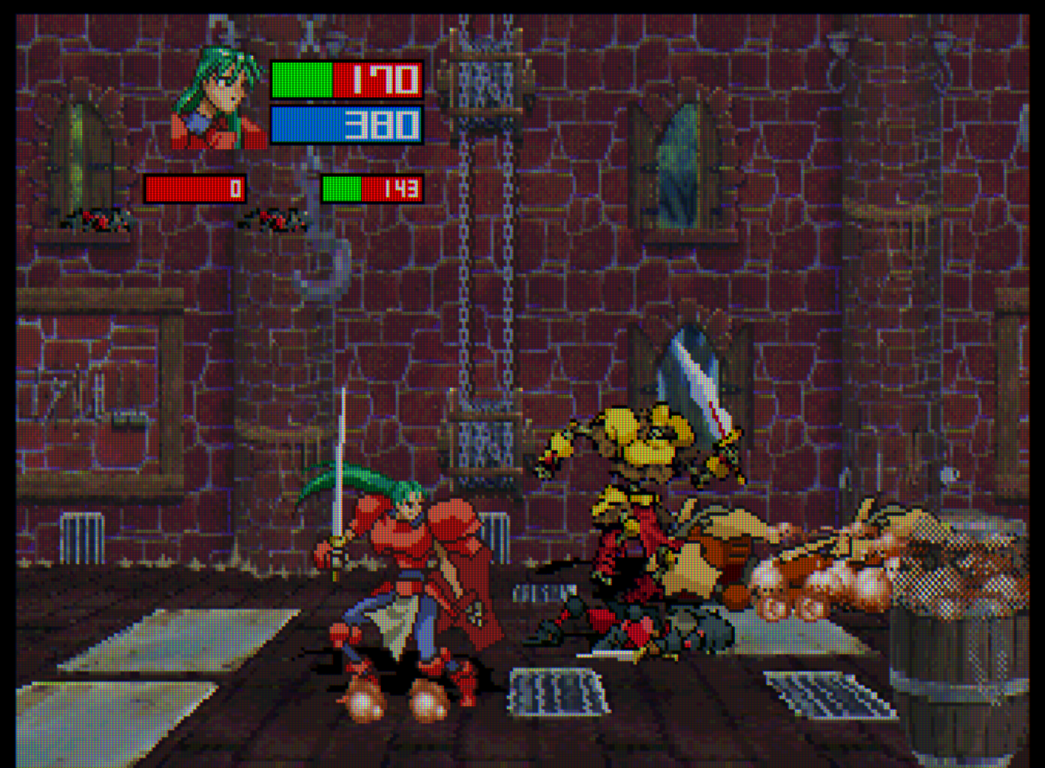 The game differentiates itself from other brawlers in three ways:

First, is the control you have over the golden skeleton warrior, who accompanies you for most of the game. This warrior offers huge support and is a competent AI-controlled partner that you can influence in some limited ways. You will surely be thankful that this "golden freak" is your ally.

Second, Guardian Heroes is sometimes wrongly classified as an Action RPG because the characters level-up between levels and you can choose how to add points to their stats. This is the character growth portion I talked about earlier, but that alone does not make the game an Action RPG. What it does is give the player a sense of character progression.

Finally, you get to choose from four widely different characters to play with, and a fifth one is unlocked after you first complete the game. Each character justifies a playthrough on their own as you experiment with their different tool, which is supported well by the branching storylines the game already offers.

"Attack the king's men! They shall do evil deeds no more!"

It is important enough to repeat for the third time; the branching paths not only make for a good storytelling tool but also serve an important gameplay function as they encourage repeating the game with different characters.

Unfortunately, other than the changes to the story and the change in the playable character, the branching paths offer little to no gameplay difference. Simply, the levels have a different make-up in the waves of enemies you face. Offering two mages and three knights against instead of one mage, a priest, and three knights.

True, the enemy combination does get more complex than that, but not the goal of simply defeating all the different enemies on-screen. One thing that drastically changes are the bosses, but they are not that widely different to begin with. 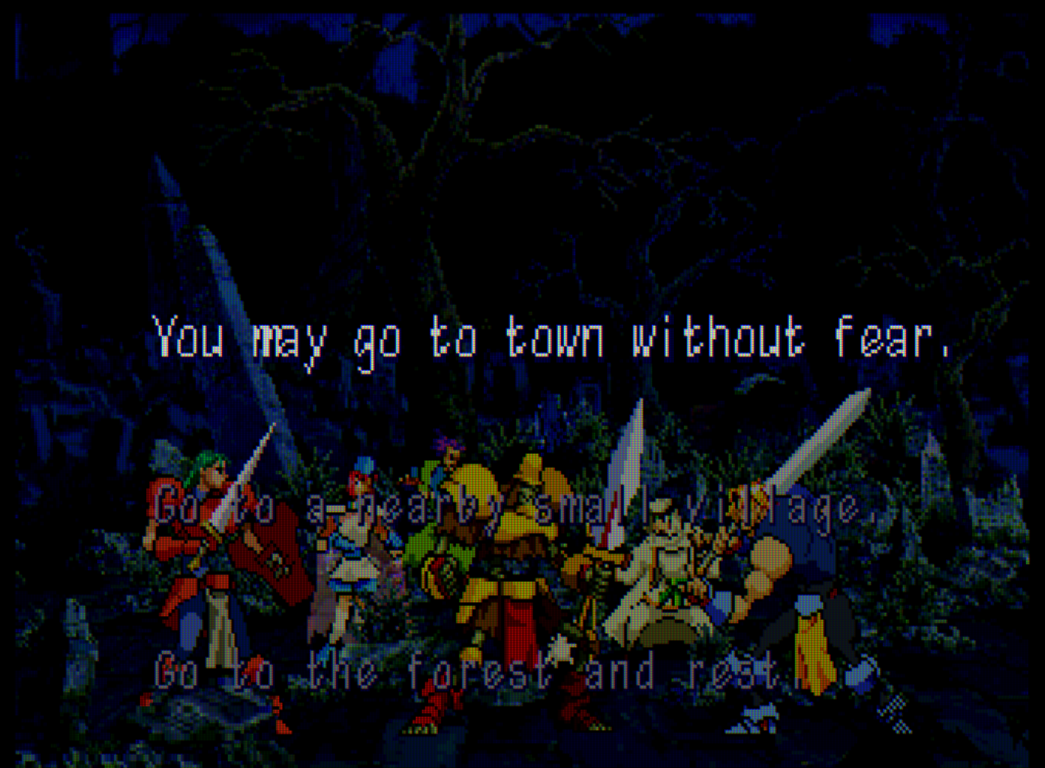 Your choices do matter in the grand scheme of things though

One other element that encourages going through all the different paths is a fighting game mode that I did not extensively try out but it looks like it could have been a lot of fun back in the day. All characters in the game, once defeated, can be chosen in that fighting mode (which is obviously not balanced at all) with up to 8 players (way before Super Smash Bros. did it).

In the Xbox Live Arcade version, the characters you unlock are not restricted to the versus mode, which means you can clear the game with one of the major boss characters if you want.

"Now you have a big golden freak for your ally! Nobody told me about that!!"

If you are familiar with any 90's work by Treasure, then you probably know what to expect in production values. With some catchy music and very good 2D graphics, the game aged really well and still looks good today.

That's not to say that the game's graphics are excellent or anything. While the stylistic choice and consistency in character design and animation are much appreciated, it is not close enough to be the best 2D graphics of the time. 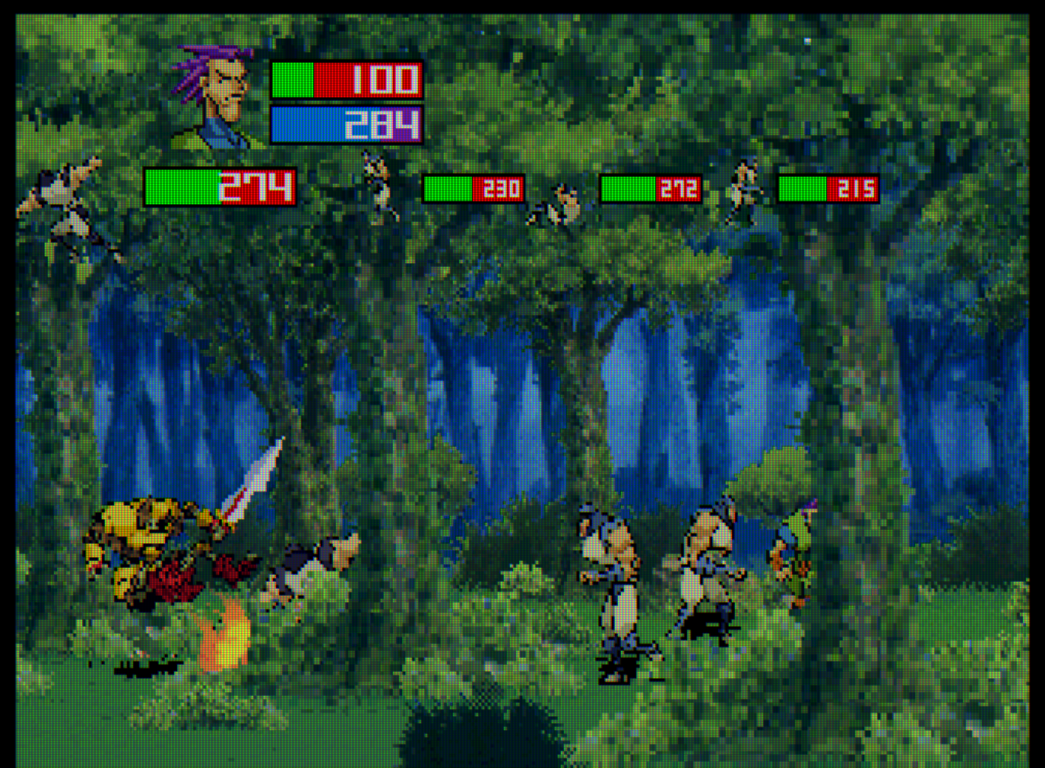 In fact, things do look very low-res in the furthest plane

In fact, depending on how you enjoy the cartoony and less detailed style, you may actually be a little put-off by the character designs, which make no effort of being humanly proportional. Personally, I feel the style's mixture of Japanese Anime and Western cartoons to be a refreshing and unique look.

As for the soundtrack, which is pretty good, you also feel that it is inappropriately similar to Treasure's other games. Guardian Heroes is in more of a fantasy setting compared to the other games and you would think that would involve less electric guitar solos.

As someone who doesn't particularly enjoy Beat 'em Up games, the fact that I enjoyed Guardian Heroes is a testament to how much it evolved the genre. As such, it is not only a good game on its own right, but also an important predecessor to other game's down the line such as Odin's Sphere and Muramasa: The Demon Blade.

In fact, if I was part of the Xbox ecosystem, I would definitely buy the Xbox Live Arcade remaster of the game, which is what I suggest for those who can. From what I saw, that version retains all the best qualities of the original while fixing some of its flaws. 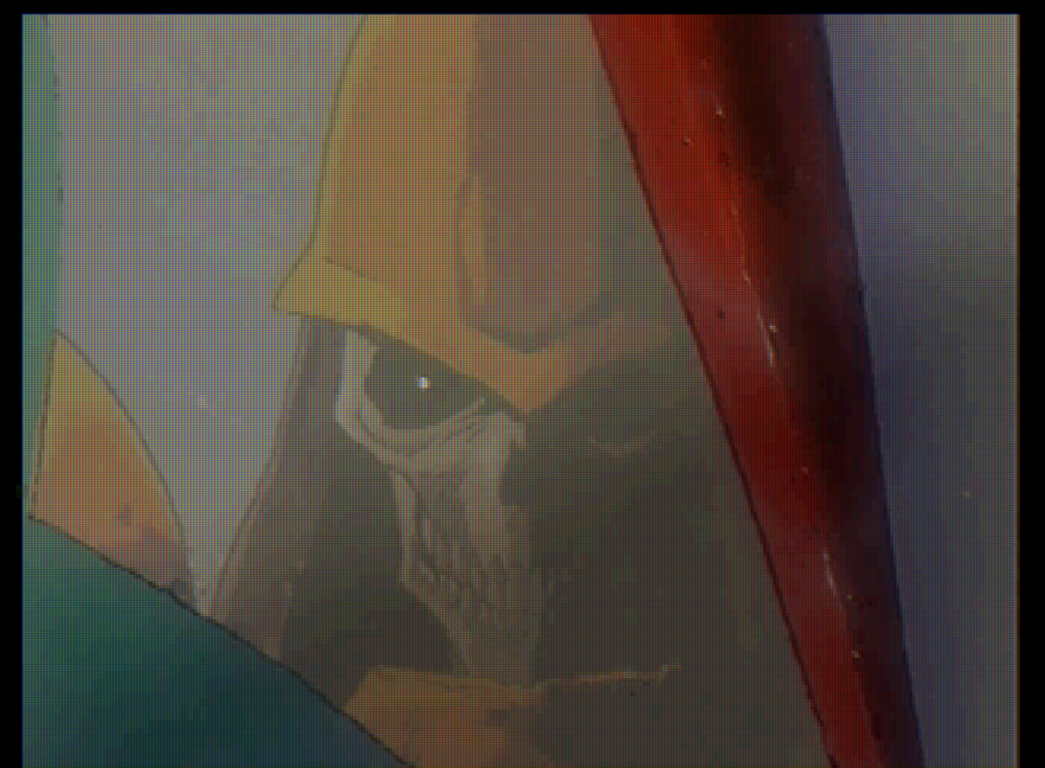 In the opening cinematics, I really thought this would be the big bad guy

1- Learn how to use magic through "fighting" directional commands.
2- Chain magic works to dish-out a lot of damage.
3- You cannot afford to lose continues in the first three stages.
4- Make sure to have the Golden Knight with good commands.
5- Avoid getting caught in swarms, it could kill you very fast.
6- Avoid damage by jumping through planes. 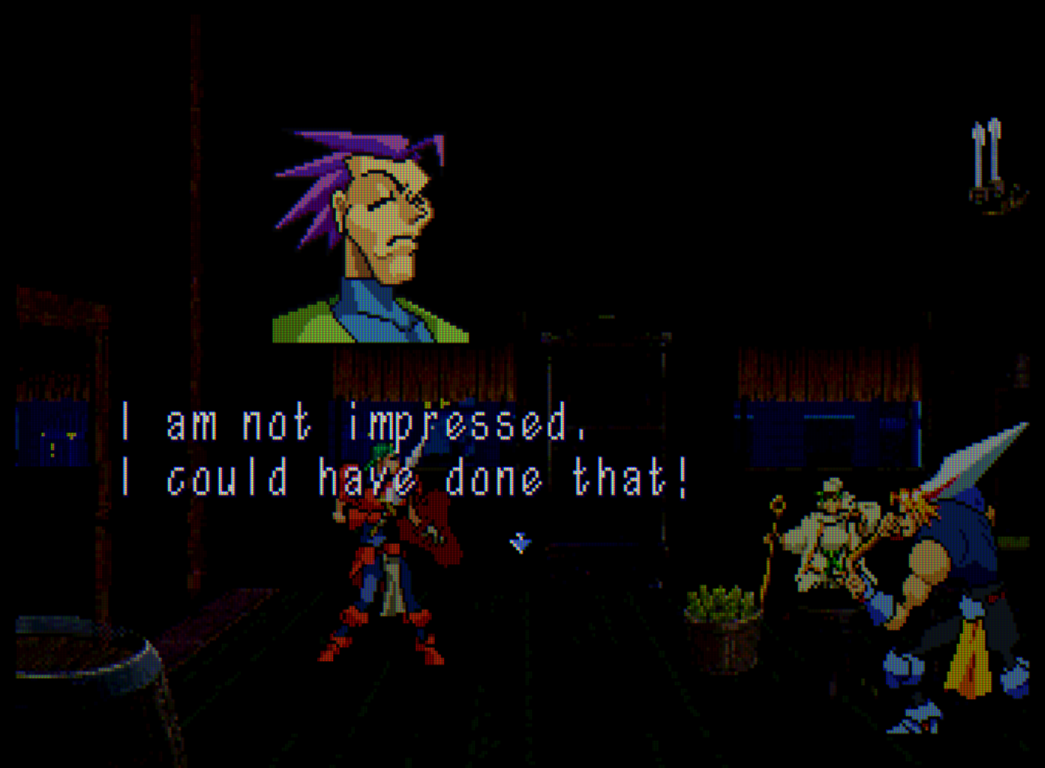 I guess it was an accident of ignorance that I ended up playing Guardian Heroes ane enjoying it. If I knew about the Xbox Live version, I would have not played the game, since a better version would be available in a more recent console.

Next game on the list is another one of Sega's Shining Series. A sequel of sorts to the first Dungeon-Crawling RPG in the series, Shining in the Darkness, this game had more of a critical success. Sitting at number 23 in the Retro Sanctuary list, Shining the Holy Ark seems to have a lot of promise.