Traveller In Playtime – Zone of the Enders: The 2nd Runner

Zone of the Enders: The 2nd Runner is a "High-Speed Robot Action" game developed and published by Konami in 2003 for the PS2. It has since been remastered for Xbox 360 and PS3 in 2012 and recieved a PC and PS4 port in 2018. Following the first game, the miner Dingo stumbles upon the once again abandoned Orbital Frame Jehuty, which he decides to pilot to chase off the Martian military force BAHRAM that still wants the frame and are endangering his comrades. This ends with Dingo getting shot, but before he dies, his organs get supplanted by Jehuty and he is bound to the giant robot. From that point onward, he starts his own war with BAHRAM across the wastes of Mars. 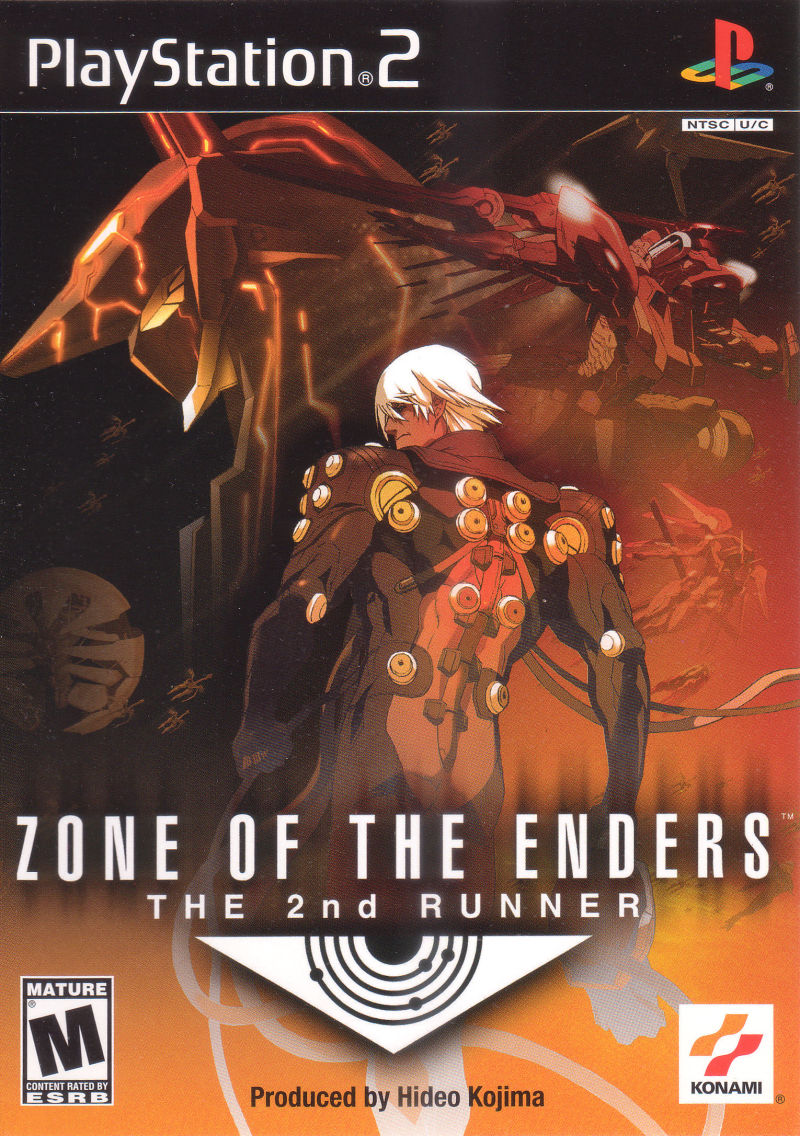 From minute 1, the 2nd Runner manages to outdo its predecessor. This is mainly due to the titular 2nd runner of Jehuty, Dingo. While his story begins in the same way as Leo's in the first game (BAHRAM attack -> Finds Jehuty -> Try to protect friends), Dingo is an experienced pilot, so he doesn't whine about not being a killer to Jehuty's AI. This makes him much more enjoyable to play as, but the game doesn't become much more than a revenge story as a result. I really can't pinpoint any major themes, especially since a decent chunk of the levels are just cool setpieces.

Those setpieces are rad as can be of course (the last few bosses especially) , but I think the game is missing some meat, even if it manages to reach an acceptable length, unlike the first game. With BAHRAM succeeding in taking over Mars since the first game, you'd think there'd be some political banter between Dingo and the various bosses over how just of an action that is, since Earth and Mars relations are implied to be pretty bad. But it's barely there, all the focus is put on the catastrophe of the hour and Dingo's revenge. All I'm asking for is a few minutes of Metal Gear-esque banter, just so the game can say something about its setting.

Still, I can't ignore the effects the presentation has on this simple story. The music and mecha design is awesome as always and the improved particle effects and addition of anime cutscenes over ugly pre-rendered CGI really sell you on it. Not to mention that the elimination of the overworld and backtracking helps the pacing immensly.

The combat of the first game was its saving grace, and here in the sequel its better in just about every way. The basics of a mecha game with true 3D movement remains, but small tweaks have been made to improve upon it. First of all, there are actual camera options now (even VR in the 2018 release), so you can play it more to your choosing. In the 2018 version, there's even the option of a new control type which lets you swap sub-weapons without pausing and gives the grab its own button. This is all in line with the focus on more speed, as almost all clunkyness from the previous game has been filed away.

The standard blade combo has been modified so you can use the last hit to chain into an upwards/downwards smash to knock enemies into structures for more damage or the BURST blade attack for more damage on the spot. Since the combo is so fast, I did have trouble using it consistently though, but I think I'm just out of practice.

The grab is no longer as risky to use against advanced enemies and can even be used in new ways. You can throw enemies, or simply use them as improvised weapons for as long as they last. There are also items strewn about that you can pick up for defensive or offensive purposes.

But what I'm really glad about is how the BURST shot has been changed. It can now be fired no matter the charge level, so if an enemy is closing in, you can fire a weaker shot instead of being locked into the animation until the charge is fully complete. Instead of it being free and the (new and much improved) sub-weapons using distinct ammo, they all now share a sub-guage that gets restored with enemy kills or the odd Metatron pickup.

It all comes together to a blazingly fast combat system, which really shines during the various boss fights. The game pays off the teased Anubis fight from the first game in full, as you face of against it multiple times, each fight getting more hype than the last.

But pushing the first game's combat system to the limit comes with a cost. Once there are enough enemies or the current area is small enough, the camera just can't keep up. It doesn't happen often, but when it does, strategy goes out the window and you just have to mash your way to safety. And with the combat not being "grounded", I find it difficult to get a read on some bosses, as their counter windows can be rather strict. But I think that is as much the game's fault as it is mine. ZoE combat is very unique, so I can't apply basic knowledge from similar games as easily. Still, I can't deny how cool it as you clash with bosses and the sparks fly.