From my backlog: Disaster: Day of Crisis

Monolift Soft developed two games for Wii: Xenoblade Chronicles (2010) and Disaster: Day of Crisis (2008). It's pretty well known that the North American release of Xenoblade Chronicles was helped by the Operation Rainfall. Disaster, however, was stuck in Japan and Europe only. And that's not a big loss.

The narrative of DDoC is that Raymond Bryce is a former member of a rescue team, but left the job after his friend/coworker Steve died in a volcano eruption. This time, though, Steve chose to die rather than a glove give way like in a certain movie. But he had given Ray his lucky compass to give back to his sister Lisa in case he never got away from the mountain.

A year later, Ray still hasn't returned the compass when Lisa is kidnapped, an earthquake hits Blue Ridge City on the west coast of the US... which is then followed by more natural catastrophes. Oh, and some nukes are stolen by SURGE, a former US marine unit with mercenaries. Their motivation follows pretty well along the lines of the marines in a movie where they fortify themselves in Alcatraz. And all this happens within 24 hours.

I forgot to mention Ray's a former marine as well, right? Well, that makes the premise a lot like... many less classy action movies. If you feel like checking the TVTropes page for the game by this point, be my guest.

Onto the gameplay. Overall, the levels are completely linear affairs and consist of multiple smaller sections. Reminiscent of The Nomad Soul (Quantic Dreams/Eidos, 2000), these distinct sections are of very different game genres that are kept separate.

First, there's the third-person platforming/adventure mode. The levels the players can 'explore' are very linear. On the positive side, they are rather varied in how they affect the player: cold water (rain or flood) saps Ray's stamina, fires reduce health, smoke volcanic ash builds up in the lungs without Ray clearing them up in safe spots. 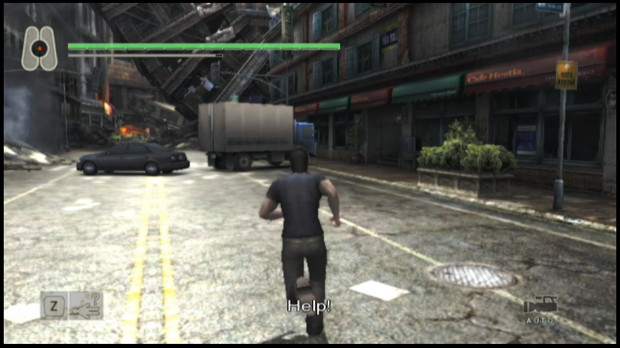 Running on the streets of Blue Ridge.

As per Ray's history in a rescue team, there are tens of people (and some dogs) to rescue in the game by various means: someone needs a splint, one needs to be carried to a safe spot, another is fine with some cookies. Many of these might qualify as QTEs or microgames, and they usually don't repeat in a completely identical fashion. 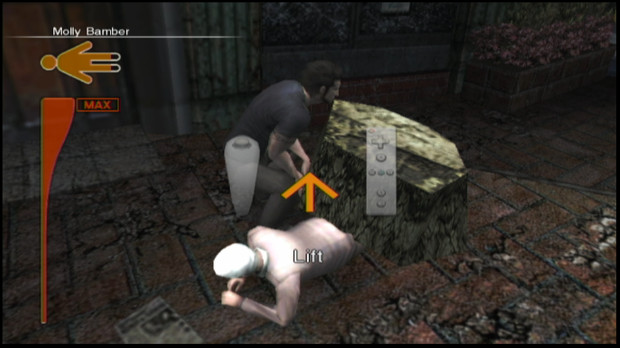 One of the repeating QTEs when rescuing people: mash A, then swing Wiimote and Nunchuk upwards.

Don't read too much into the 'adventure' side, as that's very basic: the hotspots where to pick up items and where to use them are all very clearly marked, and there's no inventory juggling.

The second repeating game mode are the shootouts. Ray can choose up to four weapons to bring along to the level. The shootouts themselves are lightgun sections where player's mobility is limited to pressing Z to hide behind a cover, and C to zoom in. The game bosses bar one are all fought in this mode. The enemy "AI" is nonexistent and limited to shooting at the player, taking a while to dodge behind the same cover, before popping up and shooting at the player again. Defeating an enemy may take several headshots, plus the player can take a good amount of damage as well. As such, these sections don't play as fast as SEGA's arcade light gun titles. It really helps that the player can use up medkits and such they've collected in the platformer sections. 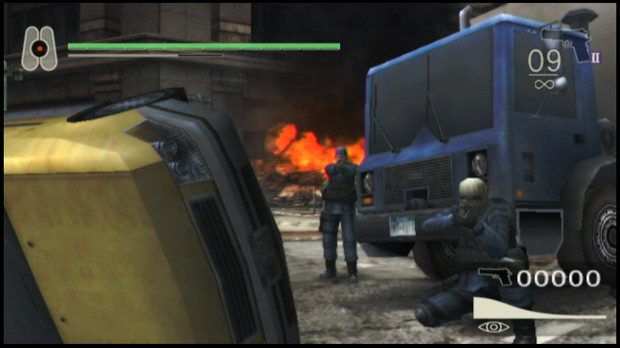 Missing: the aiming reticule since I wasn't aiming at the screen.

The third mode is driving -- whether it is away from a tsunami or tailing a SURGE truck, it's done with the Wiimote tilt controls. Some of these are very frustrating: in some cases, the viewpoint is in front of the car facing backwards, and in some the first time the car rolls over it's effectively game over. Thankfully the checkpoints aren't often too far apart. 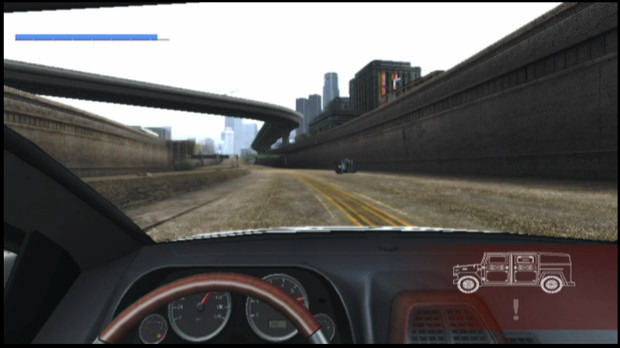 This section is OK. 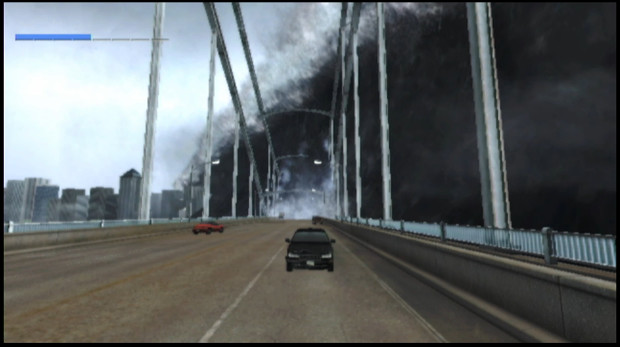 This section is not OK; the player's driving the blue car towards the camera, dodging deserted cars on the bridge.

There are some more repeating sections, but those typically rely on Wiimote gestures: swing the Wiimote or Nunchuk this way or that way. Most of the time, the game wasn't too obstinate about recognizing the gestures.

Between levels, the player can upgrade Ray's skills by survival points, earned by saving people or finding the points in the levels, and upgrade or unlock more weapons by battle points, which are earned by performing well in the shootout sections. There's a progression system, then, and a New Game+ mode after finishing the game, and some more extra. The game is about ten hours long, so the post-game content, although there's not a large amount of it, is welcome.

Overall, this is a short game that I'll remember primarily for the QTEs. I was left with the feeling that I wasn't surviving, I was performing actions to keep a movie reel spinning. And that's my biggest problem here: the feeling of being so constrained, not much unlike Transformers: Cybertron Adventures (Next Level Games/Activision, 2010). If I remember correctly, I got this game for about 20e new. Had it been a full-priced game, I would've been disappointed in what it contained.