System Shock is an immersive sim developed by Looking Glass Technologies and published by Origin Systems for the PC in 1994. The player takes the role of a nameless hacker who gets caught poking around the network of the TriOptimum company. Instead of getting sent to future-jail, one of the executives hires the hacker to hack the AI of the company's Citadel Station so that he can take control of said space station and sell its experimental virus on the black market. The hacker goes to the station and undergoes a lengthy operation in order to get a high-grade neural interface as payment. Once the hacker wakes up from his 6-month long coma, he notices that the station is overrun with mutants and that the AI, SHODAN, has taken control of the station and aims to convert humanity into an army of cyborgs and mutants.

So Your AI Has A God Complex

Being such an important progenitor game for the genre, the things System Shock does with its story feels quite familiar from a modern perspective. You wake up knowing nothing, quickly understand the general gist of the plot and spend the rest of the game listening to voice logs so you can discern what happened to individual people and floors of the space station.

There aren't any major twists to be had, but the mix of pre-disaster and post-disaster logs really help paint an interesting series of events. At first, people were merely annoyed and confused about what SHODAN was doing. But once things go critical, people essentially went to war with her, to less than stellar results.

SHODAN herself is an excellent antagonist. While she is a simple character, she really sells her god complex. She is convinced that she is several magnitudes greater than any human and just about her every action reflects this. Once you make your presence known, it gets even better, as she starts reacting to your actions in basic but smart ways. It's all scripted, but she is bound to catch you off guard once or twice. It really helps the game world feel dynamic.

The one piece of criticism I have for the story material is sadly a big issue. For the CD release (which the modern version is based on) they added voice acting. It's ok, except for SHODAN's voice, which is amazing. But there isn't any parity between the text of the logs/emails and the lines read to you. This makes it really confusing to follow along, especially since the written text is usually much longer than its voiced counterpart. This a big problem whenever you have to parse a log for new objectives to accomplish, since the game doesn't do that for you like a modern title would.

Being based on dungeoncrawlers that came before it, it should come as no surprise that levels of System Shock are dense, confusing and loaded with secrets. This makes them a joy to explore, as there are goodies to be found in just about every corner. The floors are also themed properly and given enough unique assets to stand out from eachother. The techno music in particular helps in making each floor feel unique. Some are easy to walk around, while others force you through unconventional paths if you wish to make progress.

Starting on most floors is the most tense part of the game. You don't know what enemies are around, how best to fight them and you don't know where you can refill health and energy. So until you find someplace that can heal you or provide you with energy, you are pretty much screwed. On some floors, it took me a really long time to find these stations, which only increased the tension and the feeling of relief of said tension once I found someplace to refill. Then it's just a matter of marking these stations on your map and going to town on the rest of the floor.

Your primary goal, however, should be to find the floor's cyborg conversion chamber. This is a first-aid station that SHODAN has converted in order to create cyborgs. While I don't think disabling it cuts down on the respawning enemies on the floor, it does give you a free respawn point. And I mean free. Once you restore a conversion chamber, you can die how much you want on that floor without reprecussion. It'll only cost you the time it takes to return where you died, which is of no consequence outside of the highest plot difficulty.

While this mix of high-tension and low-tension exploration works fine, I think there should be some manner of limit to how much you can revive. Like a resource, or a cooldown timer or something. Anything to discourage running into a dangerous encounter with your melée weapon multiple times to slowly grind it down to size.

Actually mapping out a floor is simple enough (theoretically, sometimes the game just throws its worst enemies at you), but figuring out what to do usually isn't. As I said before, you have to parse the logs for your objectives. Most floors are straightforward enough, but others can be really fiddly and even demand some backtracking to previously explored floors to complete your objective. While giving you objectives automatically would undermine the sense of ingenuity and macgyvering, I don't like how the game sometimes introduces objectives much earlier than you can complete them. It's a right pain to dig through your log collection and decide what is and isn't critical information, especially with the aforementioned script differences.

The actual combat and gameplay of System Shock is the aspect of it that has aged the worst. Even with the added mouselook in the modern version, it still feels like you're controlling one of SHODAN's cyborgs and not a regular human. In order to pick up items, the game disables your mouselook so that you can drag the items to your inventory. You then have to re-enable mouselook once you're done fiddling with your interface and want to hit stuff again.

It is immersive to have to manually press the interface buttons to activate your assortment of support modules, but it's always such a slow and fiddly process. Especially whenever SHODAN messes with you, which forces one of your three sub-screens to display her face, which you then have to swap back in order to get useful information displayed. It works, but the game would be so much better with even more QoL-improvements.

Once you wrestle down the interface, actual combat isn't very complex. It is a bit awkward to judge distances due to the use of sprites for the enemies, but you're give a ridiculous melée and item collection range to compensate. You have a good amount of weapons to choose from, all of which are divided into three categories: Melée weapons, standard guns and energy guns.

Early on, ammo is very limited, so your trusty pipe is the way to go. But once you collect enough resources around mid-game, you can use whatever you want for the most part. While this game shares ideas with survival horror games, it isn't as strict with your resources. I like whenever games reward smart hoarding of resources, so I got a bit miffed once I realized just how much ammo I had on me. The interface doesn't help in that regard, since you don't get a number for how many bullets you have, only a visual indication for how many magazines you have.

The energy weapons are the most interesting, since they use the same energy that fuels your modules and can be refilled as long as you have easy access to an energy station. You can also tune their power level, which dictates their damage to energy drain and overheat ratio. You can tune them up to maximize damage, but that'll mean that the cost of missing a shot will become greater, which is an interesting trade-off to consider.

Sadly, this whole weapon class is a bit moot, since the Laser Rapier exists. This is your second melée weapon and it's ridiculous. For a miniscule energy cost, this thing can kill just about every enemy in 3 hits or less. You'd think it'd make for a good, but risky weapon to use, but it's really not. Enemies use hitscan weapons and even with careful sniping around corners, it's difficult to get a kill without suffering multiple hits in return. So you might as well just rush them down with the rapier, eat one hit and be done with it. 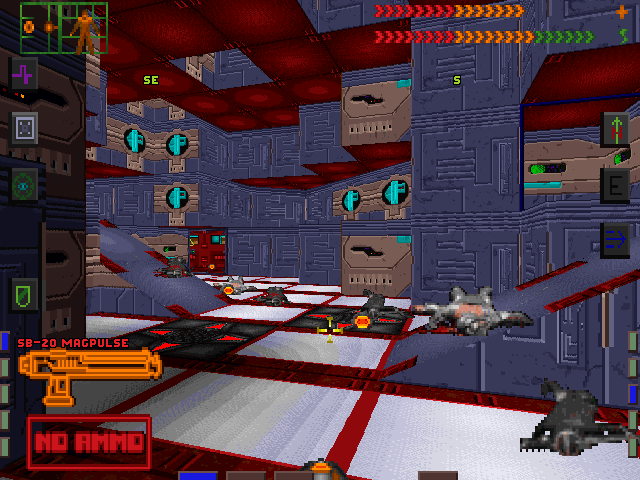 Then there's the cyber space hacking you have to do from time to time. This is awkward as hell, as it takes place in a wireframe environment with full 3D movement. They give you a lot of controls, but I find it nearly impossible to move with any degree of grace. Thankfully, the mouselook addition works here too, so you can manage with just the mouse and the forward momentum button. It's still awkward of course (in no small part thanks to the walls not having textures), but it's much easier.

You'd do well to turn down the difficulty of the cyber space sections by making use of the game's excellent difficulty sliders, which allow you to choose which parts of the game you wish to be challenging. You can make the puzzles stupid hard, disable the game's normal floor progression and even make the enemies into blind idiots that die in one hit. It's a great system that I wish made an appearance in more games.