The Wii is often mocked for its game library, yet, it actually has a solid list of exclusives that are unavailable anywhere else. Though only Nintendo games were available where I am from, I was always interested in other games. Hence, I decided to play the top 50 Wii games as chose by GamesRadar in this list: 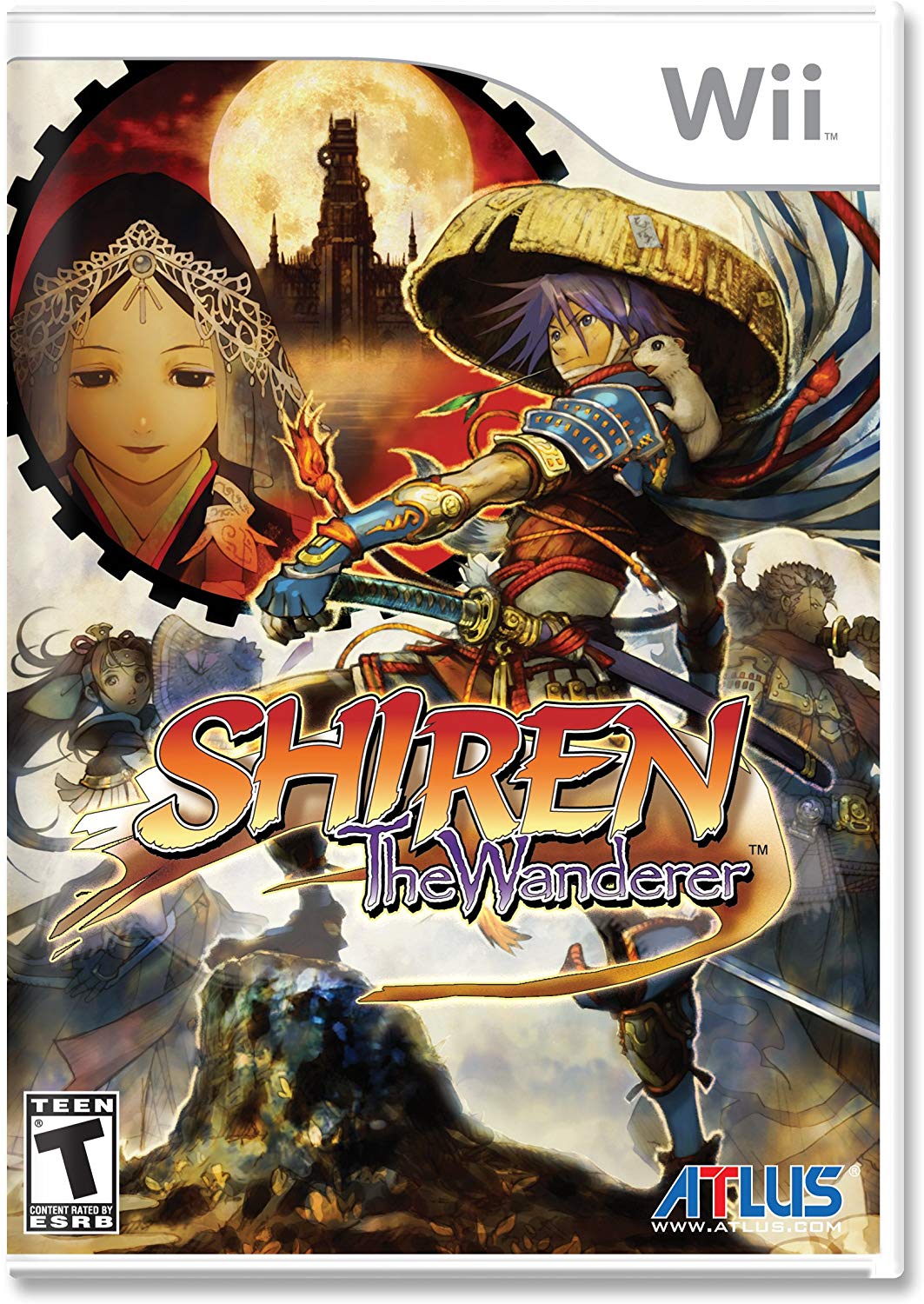 As the last non-played Wii game in my collection, I hoped that Shiren the Wanderer would close my journey with the plucky console on a fond note. Instead, the game succeeded in infuriating me and wasting my time.

Looking back, there was little reason to hope. Here is a game based on a genre I don't particularly like. The genre, Rogue-like as it is commonly known, depends strongly on convincing the player to continue playing despite losing much progress.

When it became apparent that the only reason I was powering through the intense boredom of Shiren was a compulsion to simply finish the game, I wised up and stopped playing it. At that moment, I was about seventy to eighty percent complete with the game, and I have wasted about 40 hours of my life.


"We roam the land, seeking adventures... they call him... Shiren the Wanderer"

Usually, this genre is not known for having much of a story-focus. In that way, the basic story and characters included in this game are a step-up from its peers. Starring the eponymous Shiren, the story covers his and his partner's latest foray in treasure hunting. Also known as "Wandering". 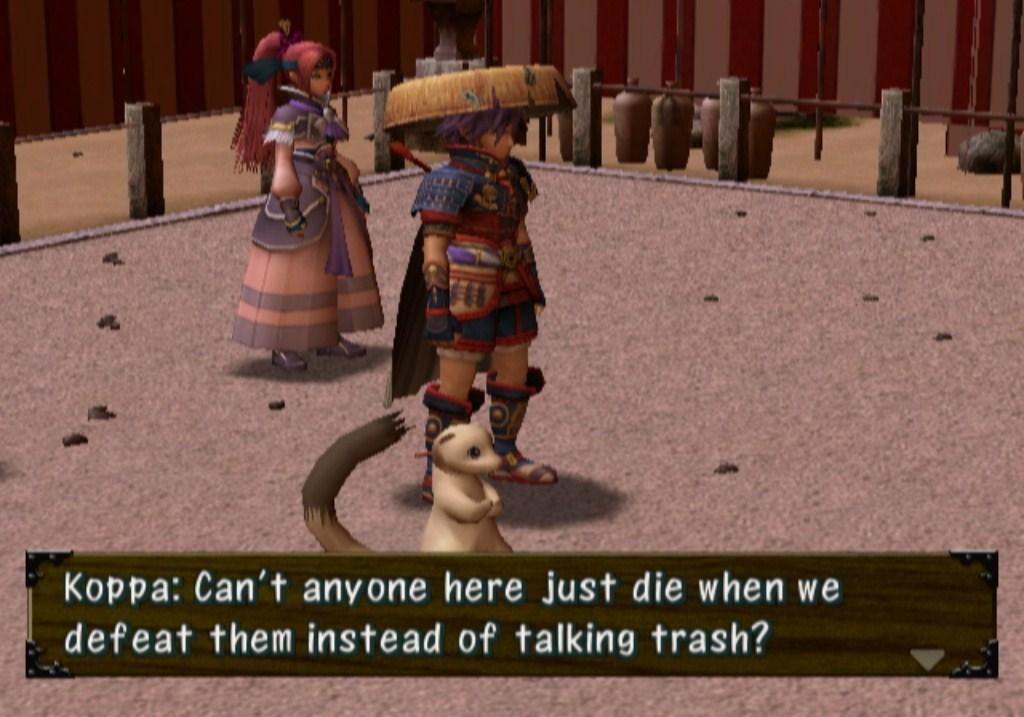 These story beats are not original, and they have little depth to them. To be fair, that is not to say that the story isn't good as much as to say that it will not be a driving factor behind completing the game.

If anything, I appreciated the simple straightforward story, and I mostly liked the character designs, which allowed me to imagine more interesting backgrounds for them that what is explained in-game.

"Everything started when we found that odd-shaped key. The key to the fabled Karakuri mansion"

For a Rogue-like, what you are looking for is two things: Gameplay and progression.

This because the game randomly generated dungeons, meaning that level design is out of the equation and because you lose most progress once you are killed, and as such retrieving that lost progress becomes a very important consideration.

Let's talk about the gameplay first.

This is a classic turn-based dungeon crawler. Each move you take expands a turn, and then the enemies in the dungeon take a turn as well. Most of the time, you have one or two allies to work with. In more complex situations, you should manually control all characters, but the AI is fine most of the time.

In each turn, you can move, attack, use items, use magic scrolls or staffs, or some other of many actions. While in the beginning, it seems that you have many choices in how to confront enemies, it soon becomes apparent that there are many useless items. 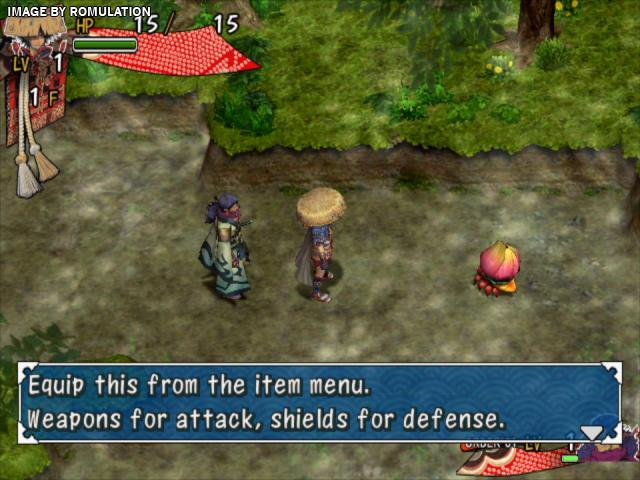 Swords and Shields are not useless though

While scrolls and staves can save you in some situations, the majority of your actions will be a forward attack that has no variety. There are no weapon types, not further strategy than your dungeon position, and no ability to extract yourself from a bad situation unless you have the requisite items.

Most of the time, it is not a bad gameplay system, and you utilize all the tools when you have to deal with a sudden monster room. However, the frequency which you go into dungeons where 90% of the time is rote gameplay is what drags the whole system down.

Decent Gameplay in Theor: +3
Gets Repetitive in Practice: -2


"It's a cardinal rule of battle to never let your guard down! Muahahahaha"

Before we begin, note that there is an easy mode to the game, where you get to keep all items and money if you die.

I make this note because the existence of this system may have affected the balance of the normal game. Because there is no logical reason why the loot you get is terrible most of the time. Seriously, it takes more than two or three runs through the same dungeon to get a single decent item.

With such terrible loot, a single death means you lost items you spent hours cultivating. In a better game, that loss would be recouped by playing the game. In Shiren the Wanderer, the items I get feel regressive from the items I had. 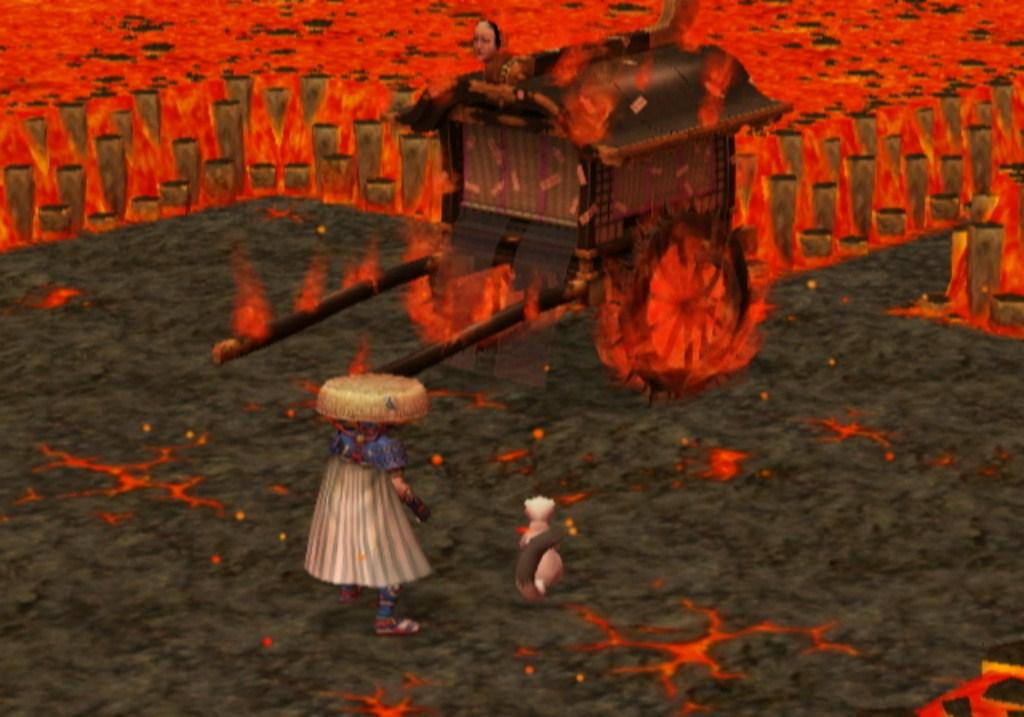 I just wish the whole damn game was inside that carriage

Worst still is the fact that there is no variety in the items as you get Cudgel after Cudgel after bloody Cudgel. It is both boring and unimaginative. It takes the fun out of diving for loot and makes replaying the dungeons worse than it normally would.

That is simply the cardinal sin of this game, as it provides no joy in playing the damn thing.

Now let's look at another reason that some people will enjoy continuing a game, and that's its production values.

Here, the most obvious shortcoming is that the game is locked with a 3:4 Aspect ratio, meaning that you will have large black borders in most modern TVs. That's because the game was obviously developed for PS2 and then hastily ported to the high-flying Wii. This is apparent in the game's background and dungeon aesthetics, which leave much to be desired.

In fact, other than the main characters design and some rare enemies, the entire graphical and animation display of the game is simply lacking. The best that can be said about it is that it serves its limited purpose. 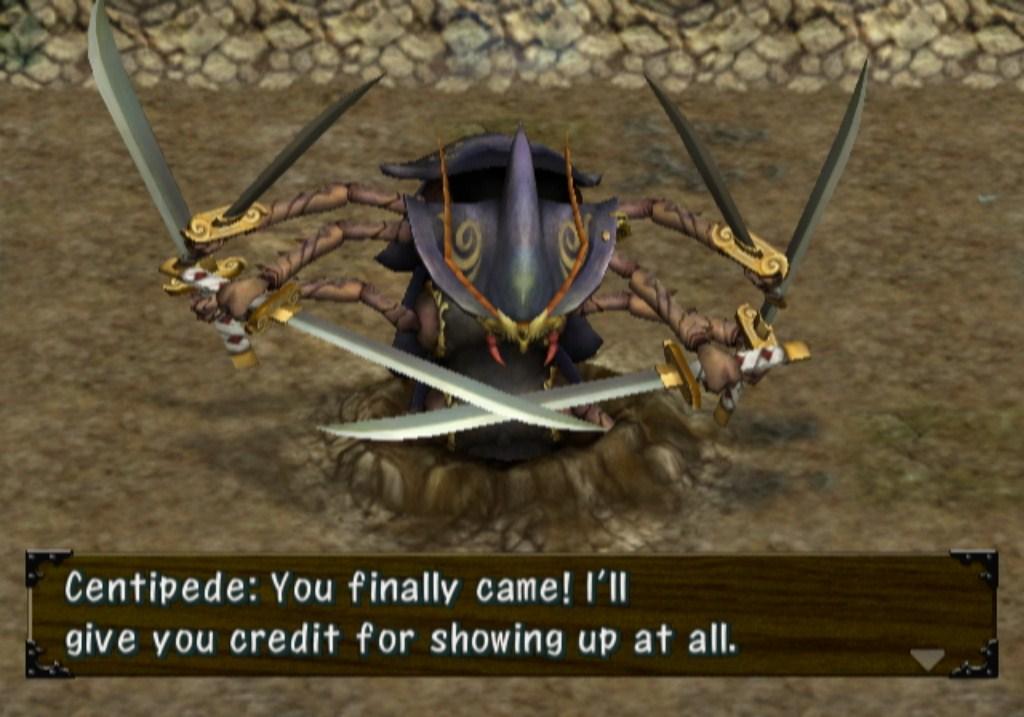 The bosses admittedly have some cool designs

The same can be said of the game's soundtrack, which is mostly okay, even if it is intensely forgettable. Like a pretty catchy elevator track that you forget the moment you step out of it.

Oh, and even though I don't miss it, even bloody Saturn games had some Voice Acting, but this game does not.

Purely measured in terms of its genre, Shiren the Wanderer fails at being a good Rouge-like because the progressions is terrible. Maybe the balance was off because of the option to play without death penalties.

Regardless of the reasons that the progression is terrible, the end result is that there is no fun to be had here. There is no earthly reason why anyone would enjoy going through the drab dungeons of the game, just to be subjected to the drab gameplay and poor rewards. 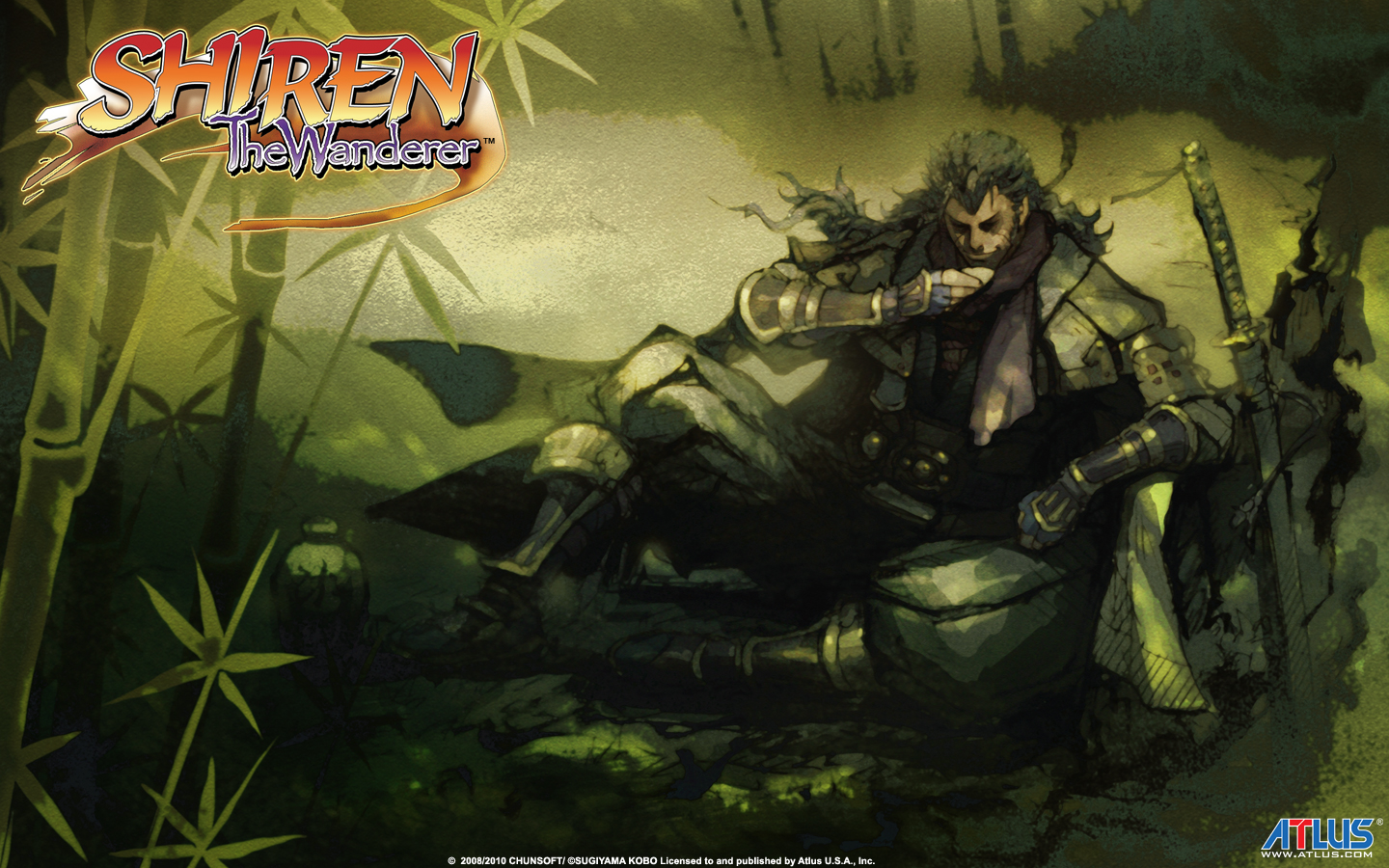 The game has some cool concept art

There wasn't a Destructoid review of this game.

Against all odds, this little-known game actually managed to sell around 200K Units which is respectable for such a niche title on the Wii. 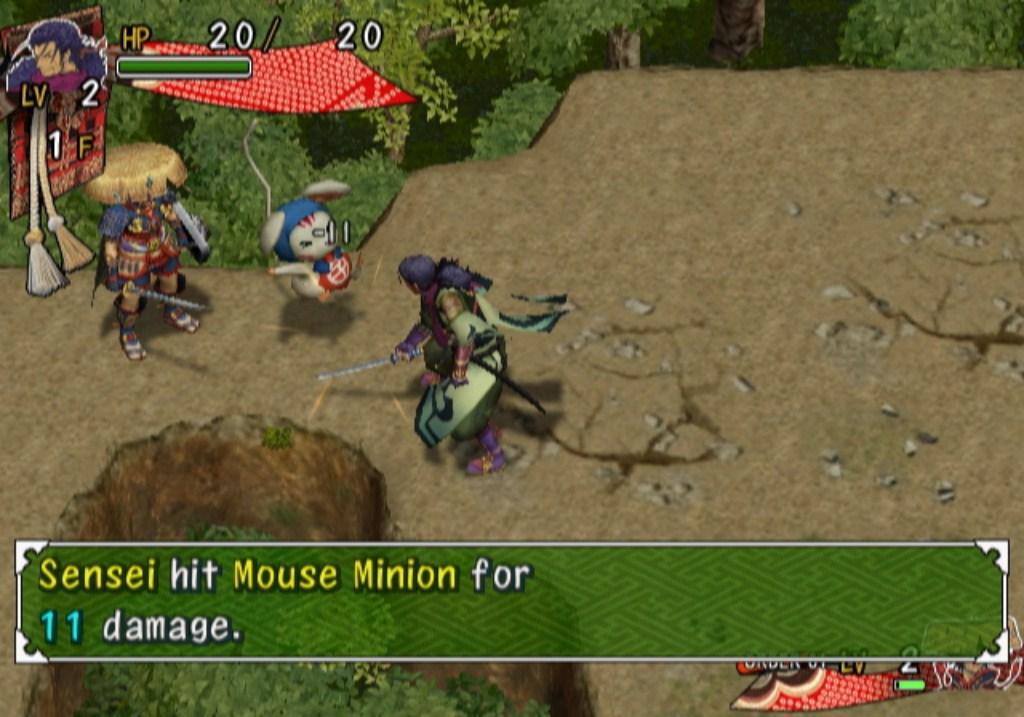 1- Always have spare weapons and items in the storage box.
2- Always have spare money in the bank.
3- Beware of pickpockets and enemies that downgrade or destroy your items.
4- To get items from jars, you need to break the jars by throwing them.
5- Putting items in jars frees your inventory.

I regret playing this game. The only reason I had it is because I bought at a discount five or eight years ago because I liked the game's cover. Now that I think about it, there is a strong reason why it was being sold at such a steep discount. Hell, I think even the shovelware the Wii is so famous for may have been more enjoyable.

Now, even though I ended my Wii Review series on a sour note, I can only say that I greatly enjoyed playing all of those Wii games. Next, I will review the Wii console itself, starting with deciding my official top 10 Wii games.