Traveller In Playtime – Tales of Eternia

Tales of Eternia (also known as Tales of Destiny II) is a JRPG developed internally by Namco and published by them in 2000 for the Playstation. It later received a PSP port that was published by Ubisoft in Europe in 2006. The game follows the hunter Reid and his friends Farah and Keele who set out to stop their world of Inferia and another one, Celestia, from crashing into eachother at the behest of a strange girl named Meredy who fell from the sky. 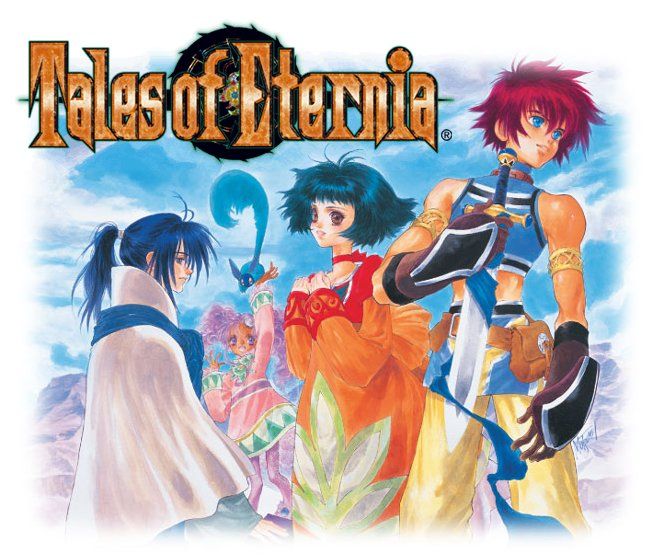 Stopping The Grand Fall? You Bet!

The overall story of Eternia is a simple affair executed well. Your goal is always to stop the Grand Fall between the two worlds, but the sub-goals to acheive that changes as you go on. I find it interesting that the first objective is simply figuring out what the main the objective is by finding a way of understanding Meredy. This means that you have to rely on the tone of her voice and the interpretations provided by the rest of the party for a good few hours, which fuels the excellent party dynamic.

ToE opts for a small party of 4 (plus some extra party members with little importance to both plot and combat), meaning that they are all given room to develop and interact with the world. They have their baseline archetypes (shonen hero, spunky martial artist, bookworm and upbeat kid), but are given arcs to either supplement or subvert those archetypes. 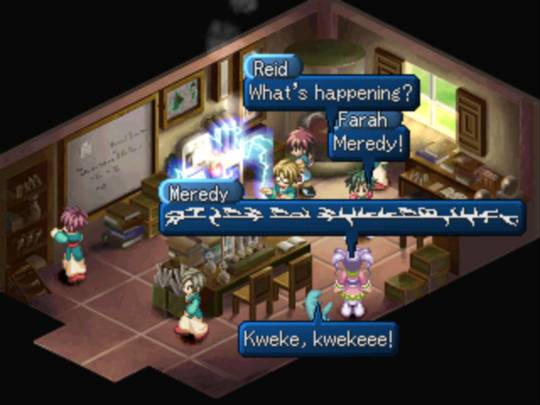 But what I like most is how much time is spent just having the party interact among themselves, even if it doesn't strictly push the story forward. There is often a camping scene or two per dungeon where the game takes a break, heals you up and lets the party discuss what's on their mind, hint at some character arc stuff or just remind you why this dungeon is important. They even go through some fights, which I appreciate. It's unreasonable to expect people to get along without some friction, so the party fights a bit to work that out. But it never gets dumb, thankfully. As even the most disagreeable of the lot, Keele, manages to remain likeable. This all works together to portray a group of friends with their ups and downs saving the world, which is what JRPGs are all about. Also, as a bonus thing, you could read the write-up I did on the anime a while ago.

The Presentation Is Pretty Good. Yeah.

Being the third Tales game on the Playstation, it would be fair to assume that Eternia would be the best looking of the three. And as fate would have, it is. While it inherits the way of rendering the world map from Phantasia, it manages to really stand out thanks to the less compact sprites and multiple layers of spell effects used in combat. Combine that with the detailed pre-rendered sprite backgrounds and you get a lovely package. With so many PS1 games going for 3D, it's always nice to see the efforts of the games who stayed 2D.

The soundtrack is awesome, being mostly upbeat, exciting or relaxing. There are some low-key tunes as well, but I don't think they are as memorable. I want to give props to the battle themes and victory jingle for not feeling repetetive during the game, as that is one of the greater pitfalls of the genre. 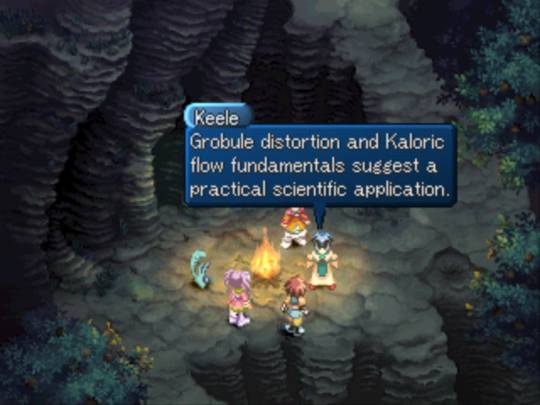 ToE use the "Aggressive Linear Motion Battle System" for its combat. What that means is that it has taken the combat systems of the two previous games and refined them by making it more comfortable to attack enemies and make it so that spells no longer interrupt combat. This makes it much more fun to fight, as you can really get a good pace going.

When I first played the game, I thought it felt a bit like a 2D fighter. While it doesn't have much depth beyond directional attacks, blocking and juggling, you do get a decent amount of options to customize your playstyle. In most situations, you make your choice between using Reid's standard kit of Tales-protagonist sword skills or Farah's punches and kicks while Keele and Meredy provide magic support. I really appreciate having a second party member with a good moveset, which isn't always a given in a Tales game, sadly. You can play as the spellcasters, but it's not as fun. The same goes for the extra party members. 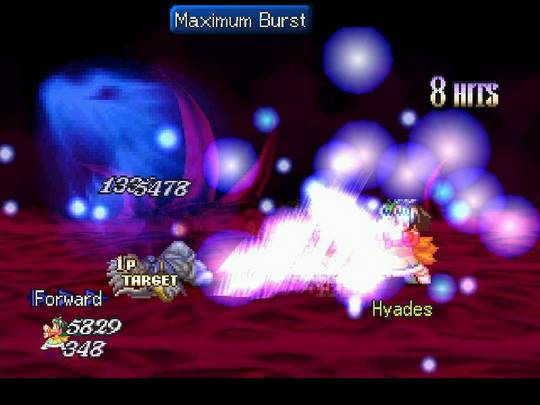 One last point of interest with the combat is how brutal it can be at points. With the gift of easier combos, the game really expects you to get to grips with how things work before long. Overall, it's not a hard game, but certain bosses really push you to the limit, which keeps things engaging as you aquire skills.

Back In Your Cage!

Aside from the odd sidequest-related acquisition, ToE uses two ways of getting skills for combat. Reid and Farah's skills are locked behind levels, usage of previous skills and their individual skill stats. The skill stats (Slash, Kick etc.) are raised by using attacks of that sort, and unless you are hellbent on only ever using the same attacks across the whole game, you'll raise their skill stats very evenly. Makes me question if these extra layers of unlocking skills add much to the game. You could just have them be locked behind levels and not much would change. I think the player would vary their attacks even without that incetive, since the enemies are designed to do that anyway.

The magic spells are more interesting. As you go along the adventure, you make pacts with summon spirits, each with their own element. These are then put into the cages Meredy and Keele hold. While they provide a basic spell each, to get the good stuff, you must combine them with spirits used by the other character. This can be done in the menu once the spirits have leveled enough, at which point you "fringe" them in order to produce new spells. This isn't interesting at first, but once you get enough spirits, you have to mix and match them in order to get the spells you want, often by sacrificing a good spell on the other character. I think this is a good system, as not only does this force you to pick what you really want, it also allows for free experimentation, as you can always reset your loadout at little cost. The only negative thing that comes out of it is that you reset the summon guage, which is quickly refilled as long as you don't use opposing summon spirits in combat. 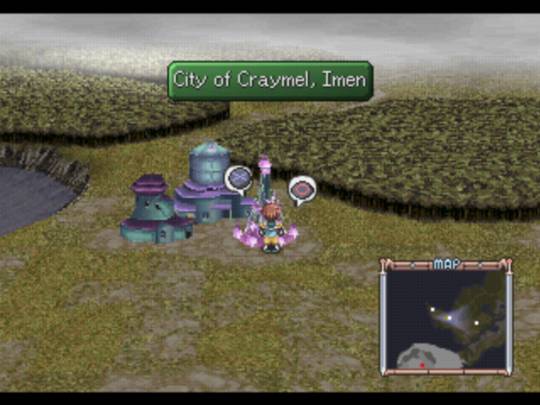 Inferia & Celestia Are Your Playground

While not the first Tales game to play with the dual world concept, ToE is the first to really sell it, as you get two full world maps to run around and explore. The dungeons are paced rather well, save for some annoying puzzles (that damn forest maze!) that thankfully aren't as draining to get through as a few in Phantasia. Or as poorly translated as that one puzzle in Destiny. Progress!

But the real thing to get excited about are the world maps. They feature a bunch of secrets to uncover once you are truly let loose with the ship. And what an awesome ship it is, you can even explore underwater with it!

There comes a point in the game where one of the bosses will just sandbag you if you try to fight him as soon as possible. While it is poorly signposted, it is at this point where you should go around the world for some optional dungeons and equipment in order to power up and beat him. It's pretty cool of them to allow for optional exploration at that point, while still leaving the possibility of beating him for the skilled and determined. Would have been better if you got a hint about exploring beforehand, but that's a small complaint to put forth against such a fine game.