Hey folks. We all saw the two big Smash reveals at this last Nintendo E3 Direct. "Hero" from Dragon Quest (actually, from several of the unnamed protagonists in past Dragon Quests) and Banjo-goddamn-Kazooie. I really didn't believe that one until the rumors started getting fierce.

Anyway, since both characters are a little ways off from release, the only thing we have to go on is what we've been shown in the trailer. What can we learn just from that? Well, it turns out we can learn a large portion of their moveset since Smash operates in a fairly formulaic manner. There are several "classes" of moves and with enough time it's easy to pick them out just from looking. So let's do just that and see a little more closely what we'll be getting with both Hero and Banjo-Kazooie. 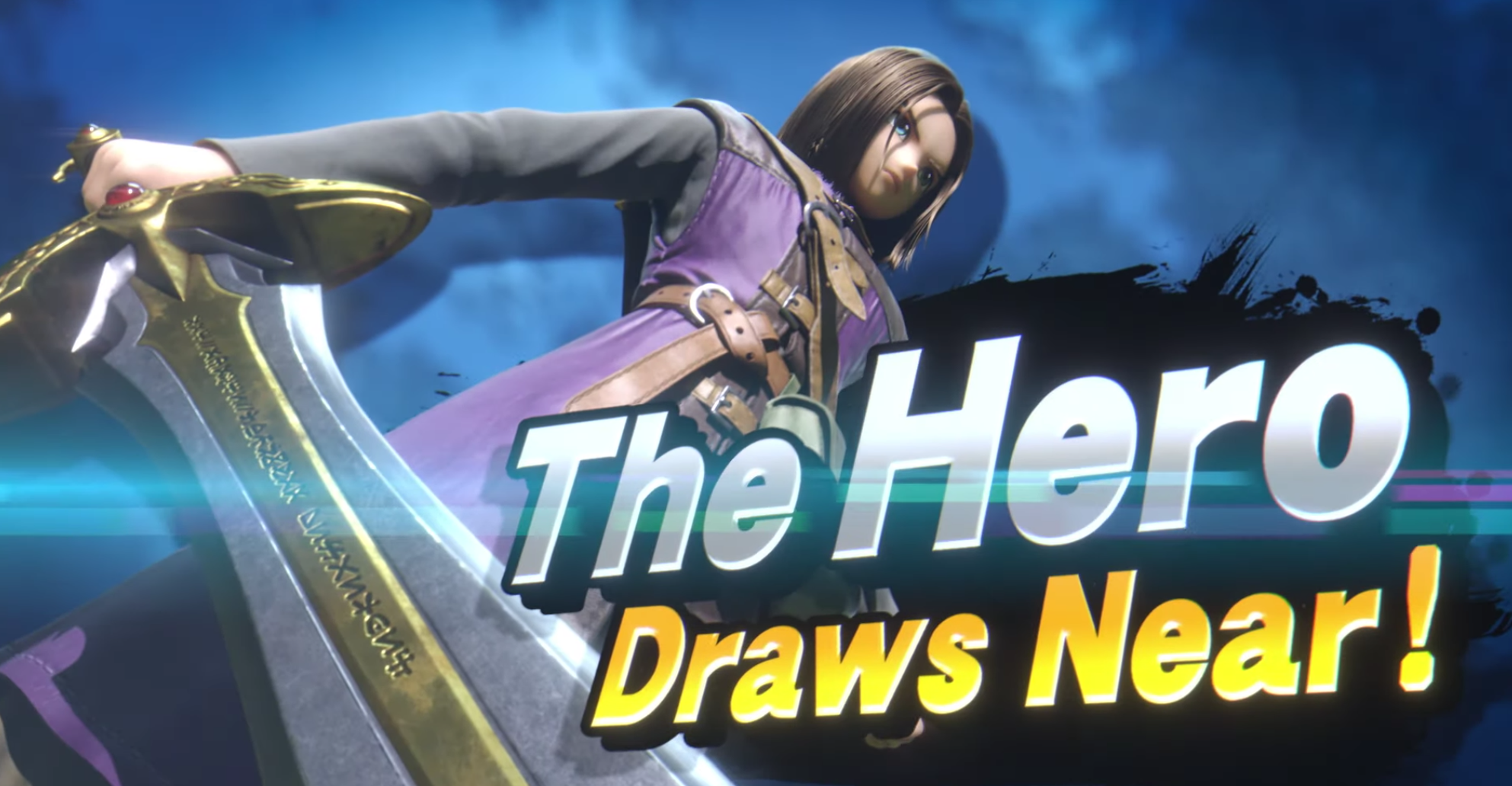 Hero (this name is going to take some getting used to) is largely a clone of both Link and Young Link, sharing many of their normal attacks with some key differences. He has entirely different special moves, however. Hero will likely rely on smart use of his Spell system to boost his attacks, provide him with projectiles and certain defensive options. Exactly how it works isn't clear, but I get into that a bit more below. Let's begin:

Some general things first. His shield works the same and Link's and Young Link's, blocking projectiles (including Bowser's flames, in this video) 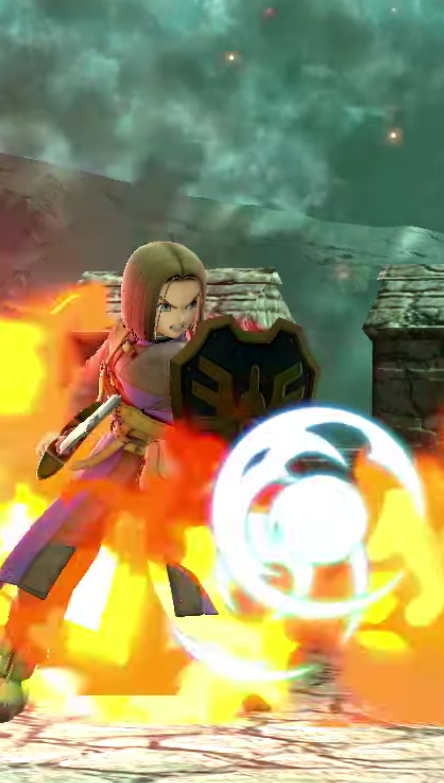 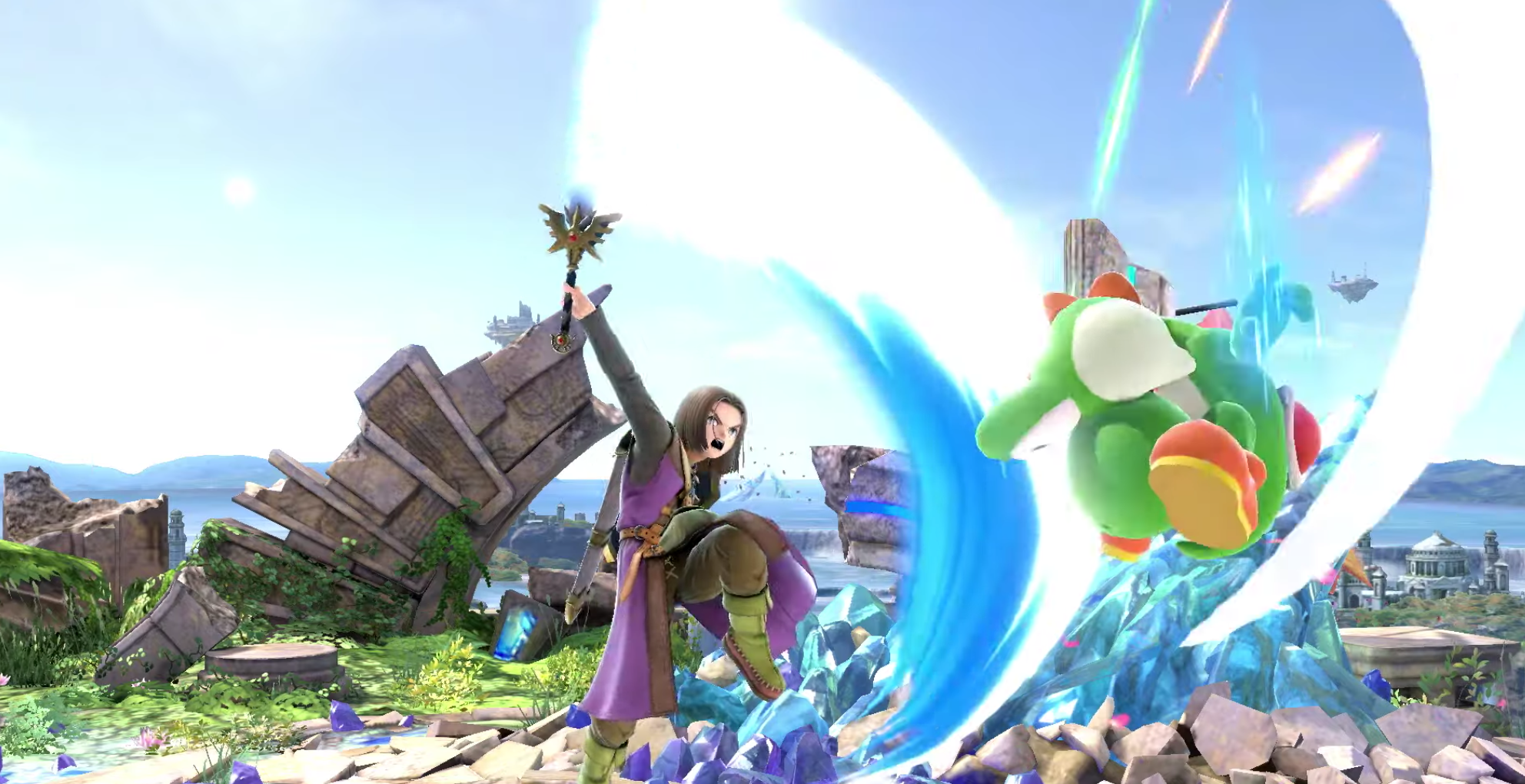 A broad overhead sweep of the sword, very similar to Young Link's forward-first overhead sweep. Adult Link does a similar attack, but it starts from behind him. 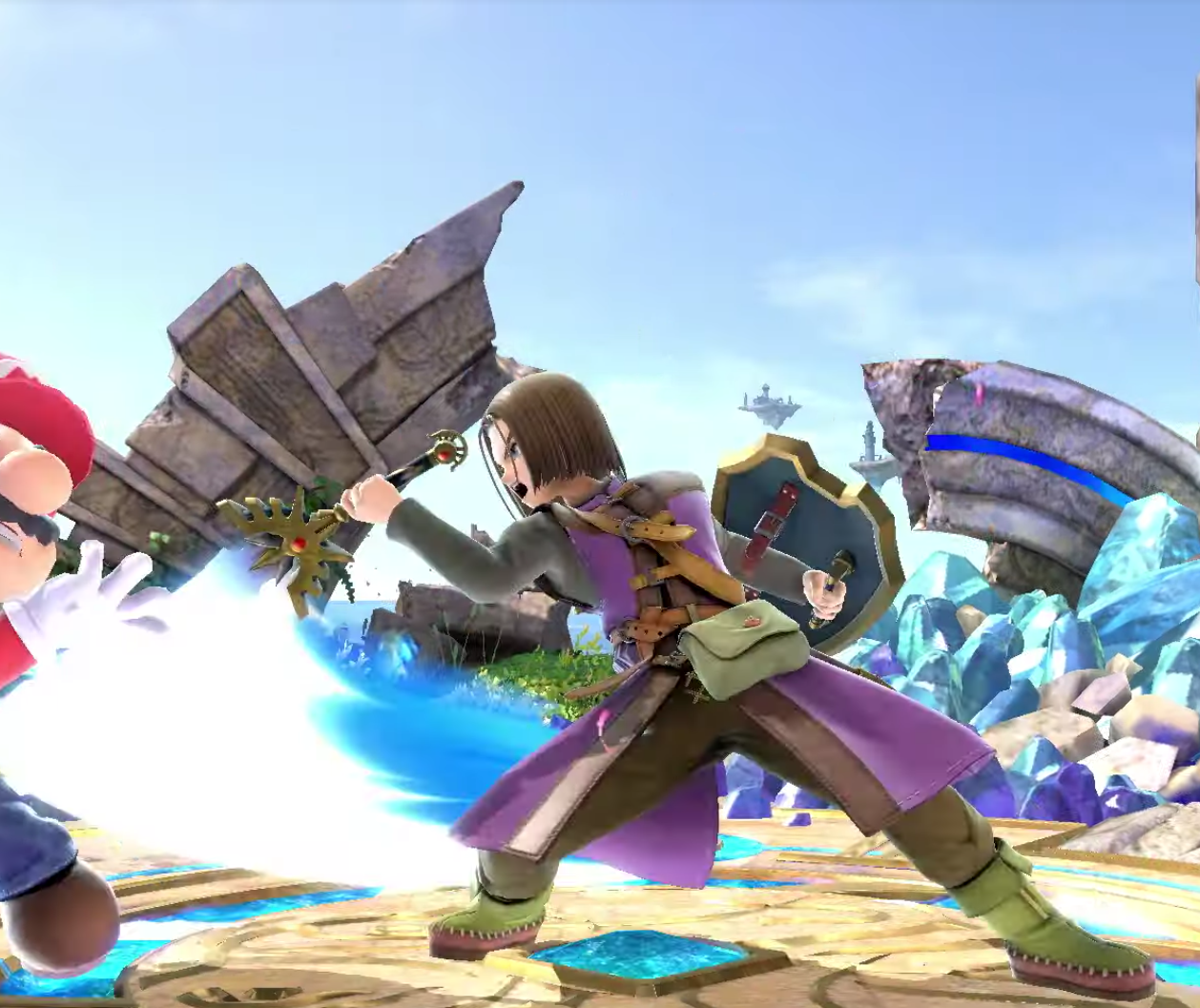 Hero's jab is a three hit combo, first sweeping up, then down, then back up and outward, pushing the opponent away. 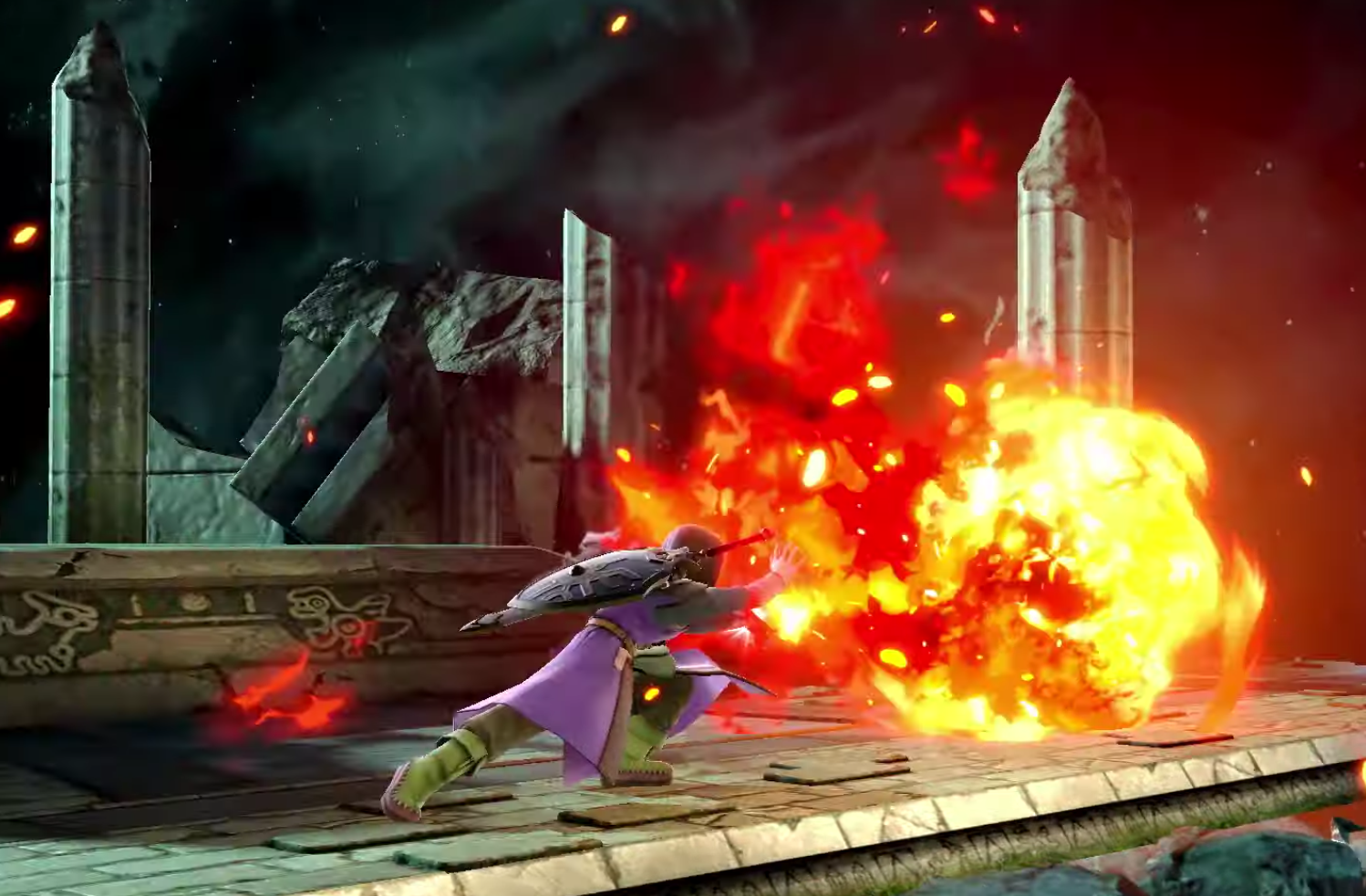 Hero shoots a stream of fire or, after charging, a larger blast of fire. It's not clear yet how this ties into his Spell system (more on that later). 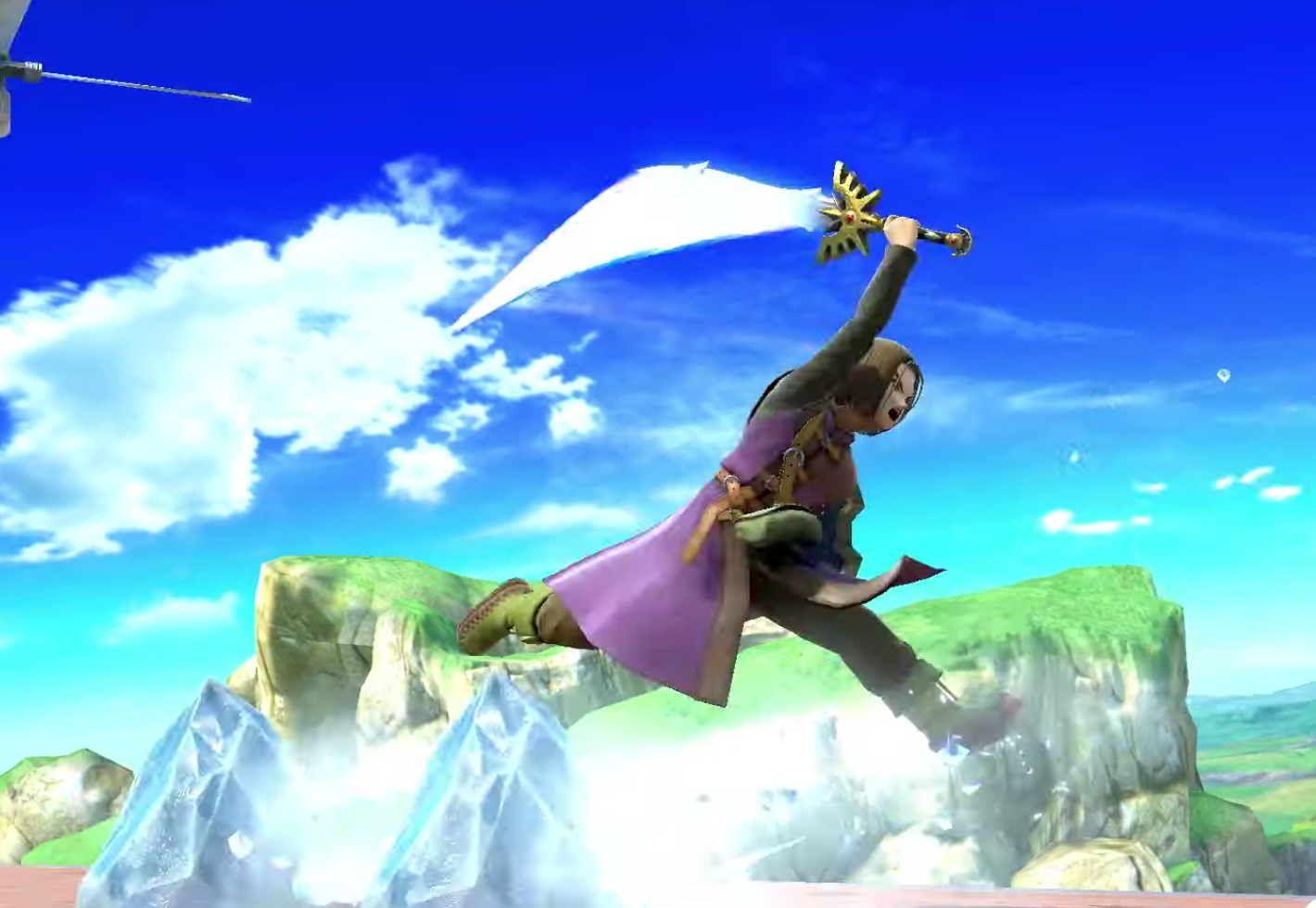 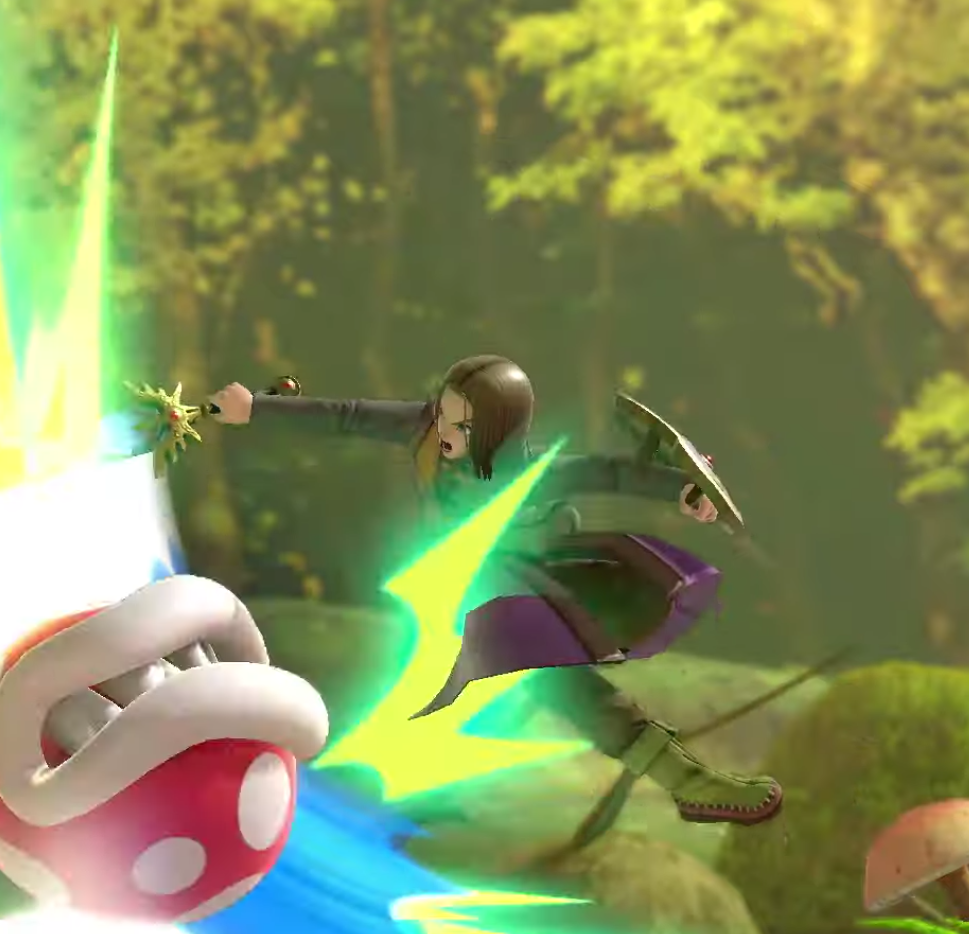 Hero does a backward sweep, starting low and going upward similar to Young Link's very potent Back Air. We can see this is a Back Air since he starts the attack while facing the other direction. 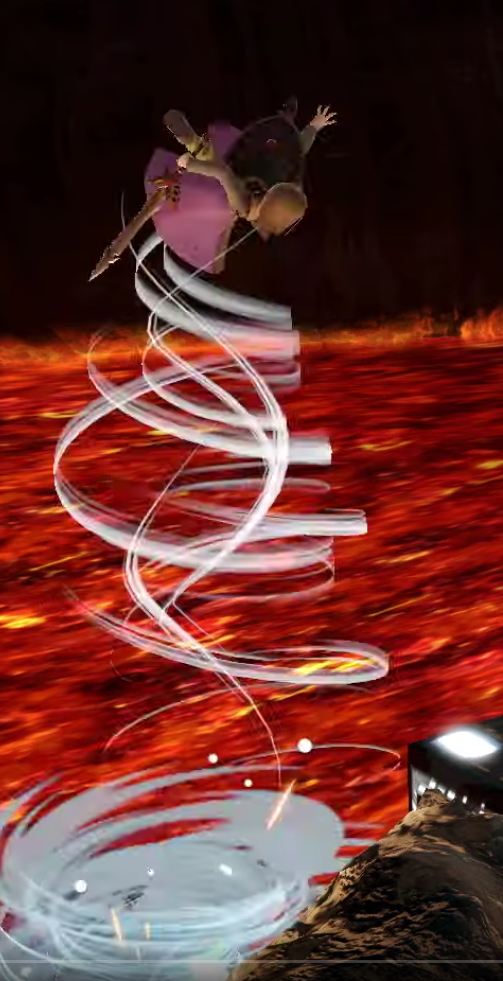 Hero channels briefly then shoots wind below him, generating two cyclones that damages opponents and pushes Hero upward. It likely doesn't have hitbox on the character itself, only below where the cyclones are. So it covers a lot of distance but might not be the safest recovery in the game, and the slow startup time could give good players time to react and punish accordingly.

Hero casts a bolt of lightning from his sword. This one may also be related to Hero's Spell system which we'll see more of in a moment or it may be his Side B. It could also be a different Neutral B when this Spell is selected. It's a little tough to say. 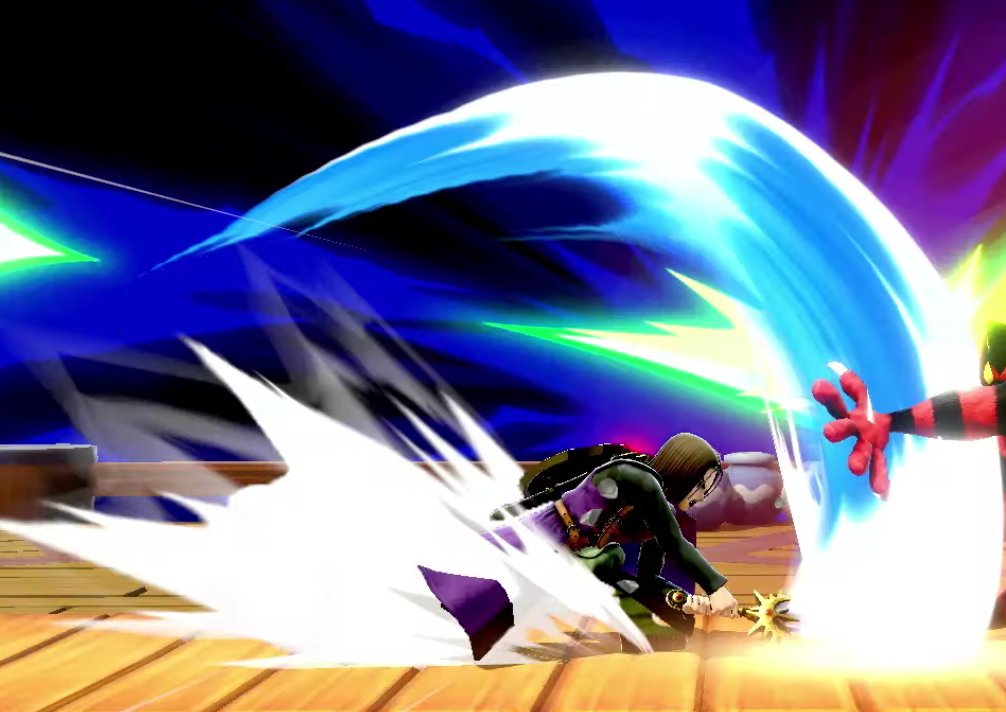 A heavy overhead swing that seems slower but similar in principle to Young Link's or adult Link's first part of his Forward Smash. 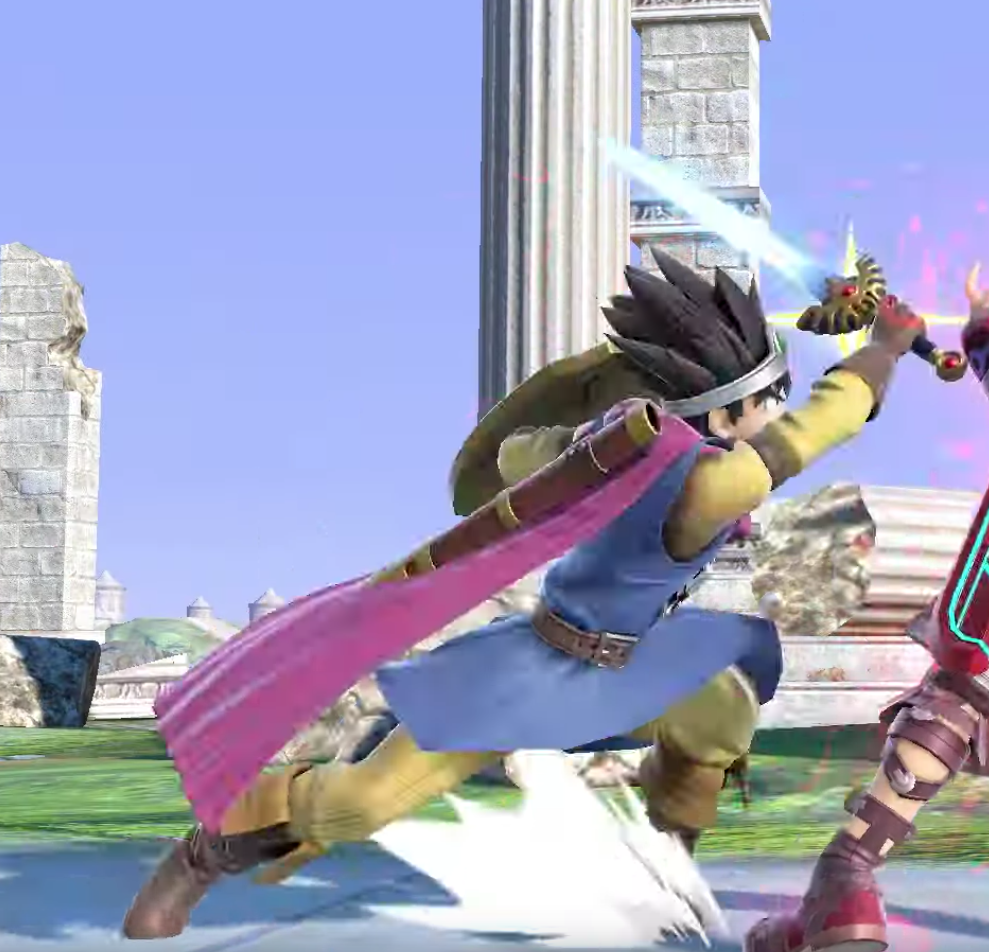 This one is very unlike either of the Links' Forward Tilts. Hero does a shield bash on the first input, then a lunging sword swipe with a quick second input. This would be the first two-step Forward Tilt in the game. It's possible I have it reversed and this is actually Hero's Forward Smash, but then his Tilt would be an incredibly beefy looking attack. It makes more sense for it to be as I've outlined here since tilts are often medium-power attacks.

This one was tough to spot, but very briefly you can see Hero performing a down tilt attack on Snake, popping him up into another attack from someone else. Hero drops super slow, doing a sweeping kick that neither Link performs.

Neutral Air and Up Smash 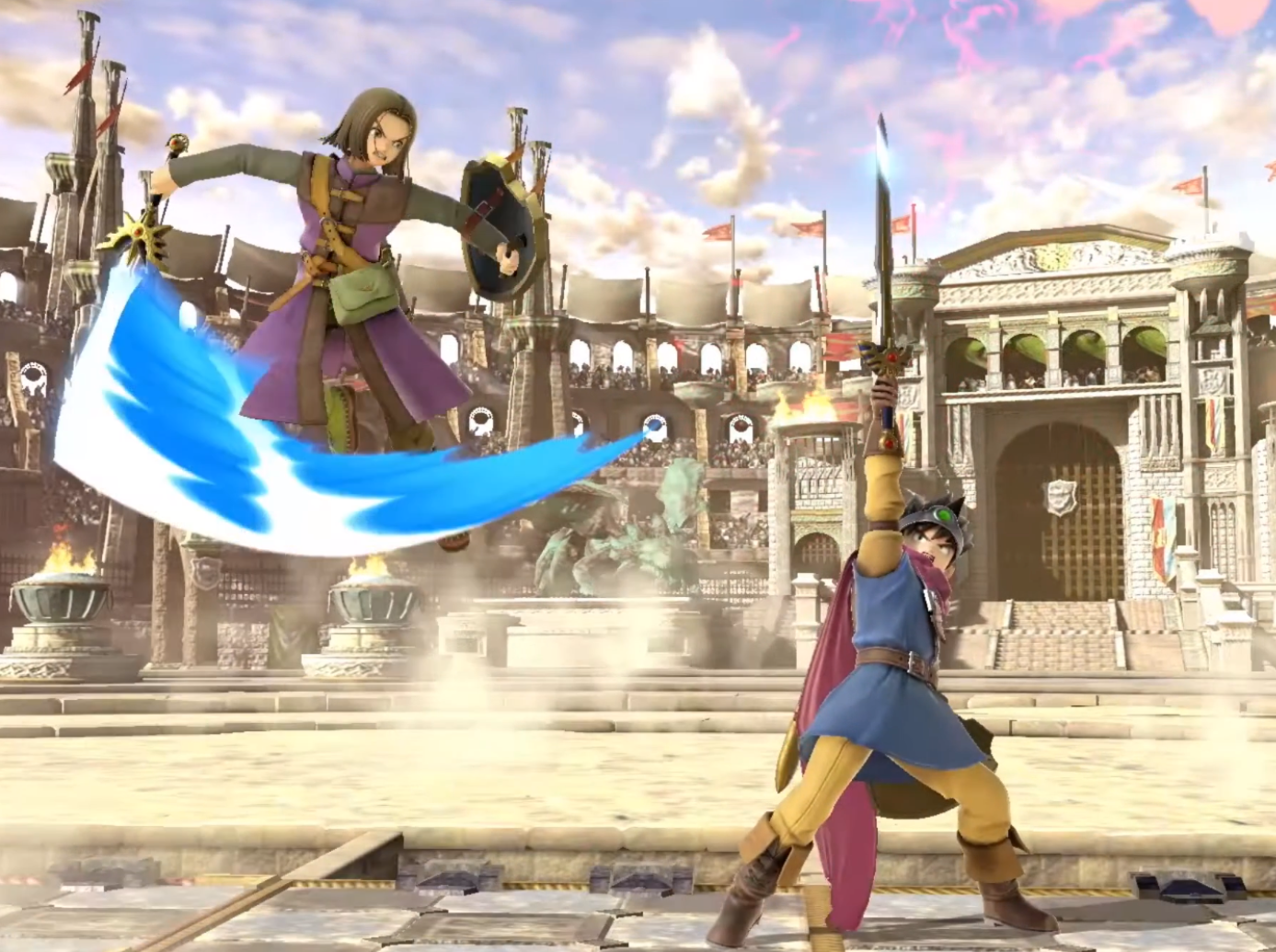 Here we see two Heroes, the one at left doing a Neutral Air attack, which is a semi circle in front of Hero, going from top to bottom, and the Hero at right is doing a straight upward thrust similar to Marth's Up Smash. The smash attack might look like a taunt here, but he does use it to hit an opponent just a few frames earlier in the video who is clearly shown reacting to that hit and then to the Neutral Air hit of the other Hero. 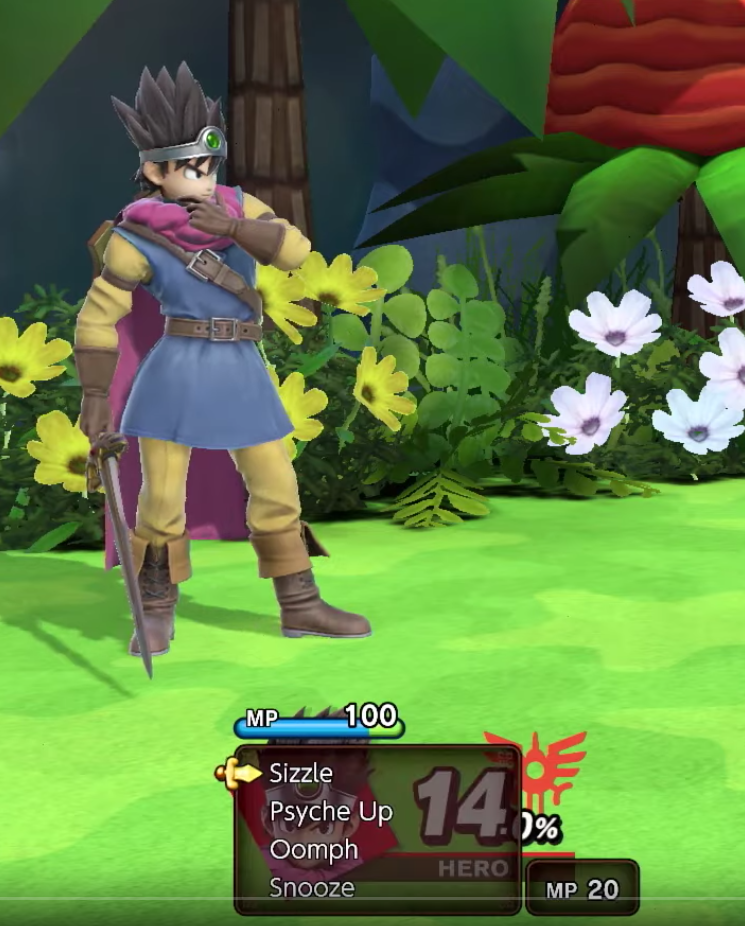 With presumably the press of a B button plus a direction (likely Down + B, or else a Neutral B), Hero calls up a list of RPG spells to choose from. It's possible Sizzle is what I've labeled above as Hero's Neutral B, but then that doesn't explain the absence of the lightning sword attack that I labeled as his Side B. These may be entirely different attacks and they appear to come out as soon as selected from this menu, and after Hero adopts this particular "thinking" posture and the spell's name is displayed on-screen. This wasn't demonstrated in the two attacks I listed previously, either because the moves are different or because of how they edited the trailer.

Next, note the MP gauge and cost displayed at the bottom. You can choose from Sizzle for 20 MP, Psyche Up for 17 MP, Oomph for 18 MP, and Snooze for 16 MP. Snooze is the only one of these spells definitively shown off, the others may have been used but in ways that made them difficult to detect. Snooze casts a slow moving blast of sleep... uh, stuff. The range is quite long, which is terrifying. Psyche Up might recover MP (although that's not what it does in the original games, I just can't think of another use for it here), Oomph might boost damage or knockback (it's a strength buff in the original games), and Sizzle could be the Neutral B fire attack seen above.

It's possible the MP gauge fills on it's own, after taking damage, after dealing damage, while charging up somehow, or some combination of all of those as other meters in Smash do behave in those ways. There is a stance Hero strikes (not shown here) where he starts glowing after an attack. This may be an MP charge-up move, but then I wouldn't be sure how it's executed. (I'm out of B move slots, this character is weird!)

Actually, this character is so weird that he has four more spells that he's shown using that aren't on this list. After doing the thinking pose, Hero is shown using Bounce (a very long-lasting reflective shield that lets him move while it's up), Kacrackle Slash (a Forward Smash-looking attack that traps opponents in ice), Kaclang (a perfect guard that prevents all damage and knockback while being locked in place), Zoom (let's Hero fly upward a long distance, importantly this is done after being attacked and without any obvious use of picking from the Spell list), and Kamikazee (Hero focuses, absorbing or ignoring damage and then releasing a large [LARGE] explosion).

These all probably cost MP and a possible solution to my conundrum is that they can be set to a particular B move slot after picking them, in similar manner to picking a Manado Art as Shulk. The MP may run down the same way Robin's tome durability runs down after use, leaving them without access to certain moves until it comes back on its own. Where the menu-picking comes into play is very difficult to say at present, and it's possible any move that shows a spell effect (the rings around Hero) are a result of this Spell system, and cost MP.

Is it done being nuts yet? Nope, because we're also shown one of Hero's A moves (his Back Air) being enhanced by lightning for some reason as once again the move has the Spell effects around Hero. 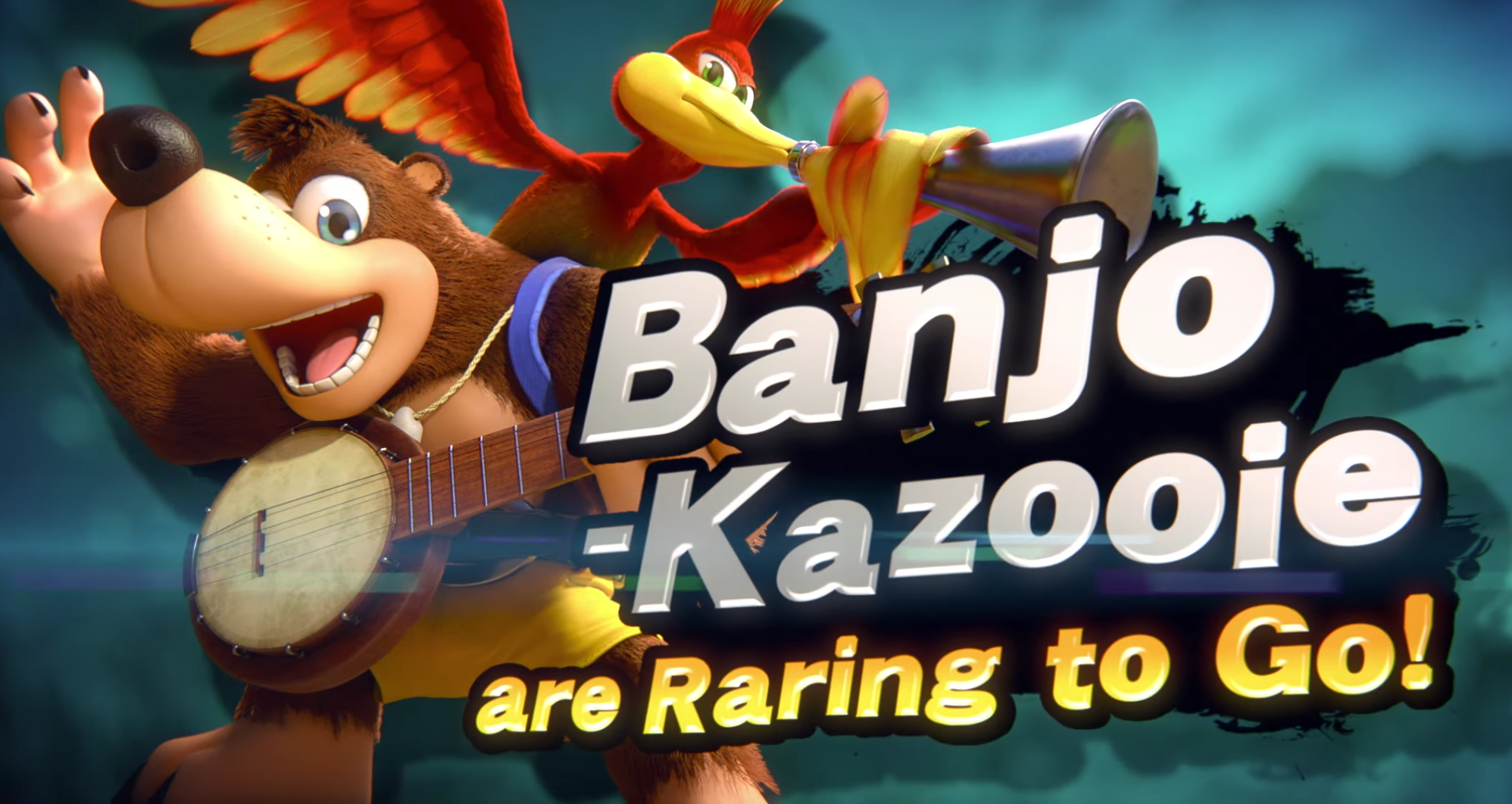 Banjo-Kazooie is a comparatively simple character that appears to have good aerial movement, some decent range and projectile options and is probably also quite heavy. Some fast moves should compliment what is likely to be an otherwise slow character. It's possible projectiles will be a focus of this character, in similar fashion to Mega Man. 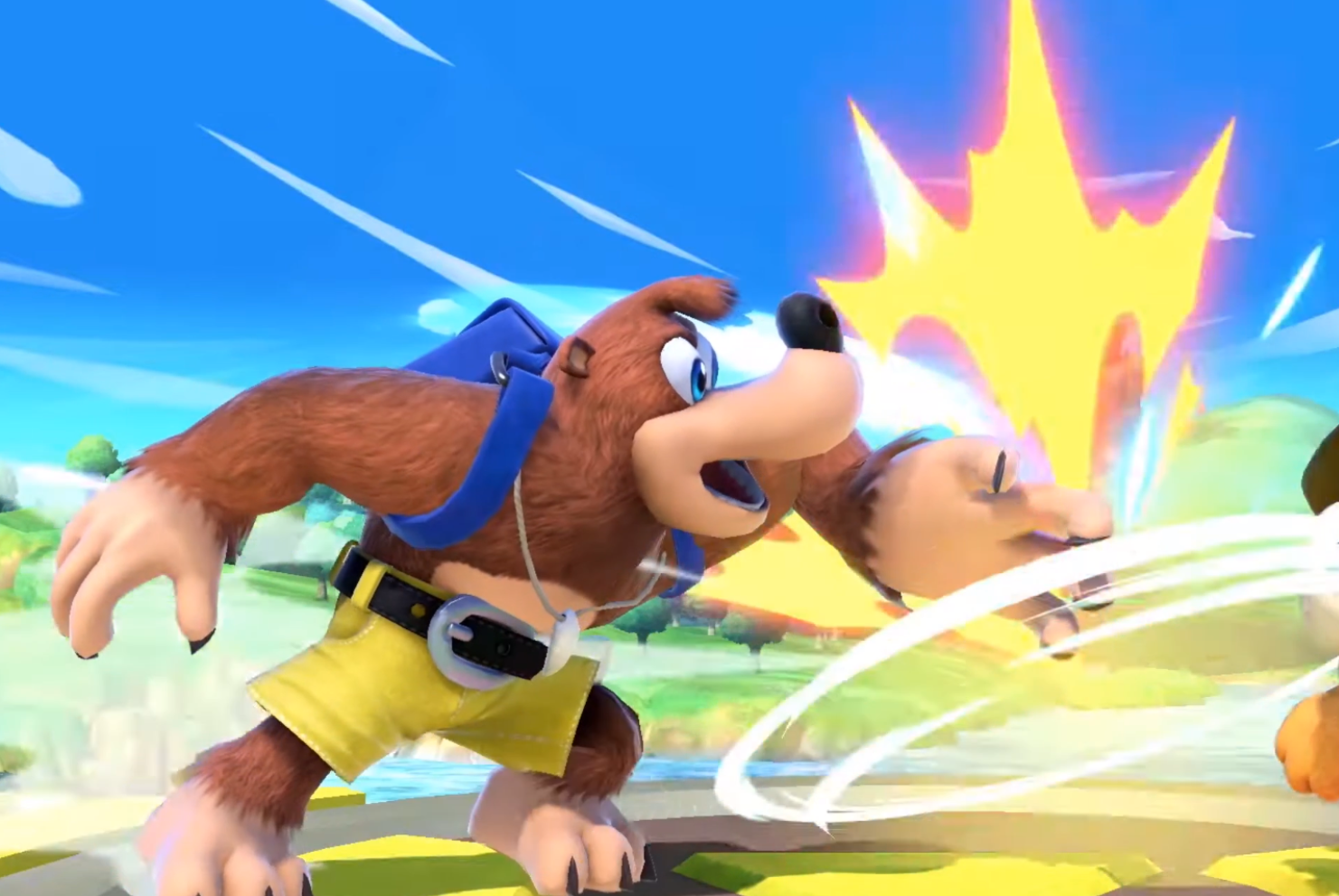 Banjo uses Kazooie to peck at opponents while very low to the ground. 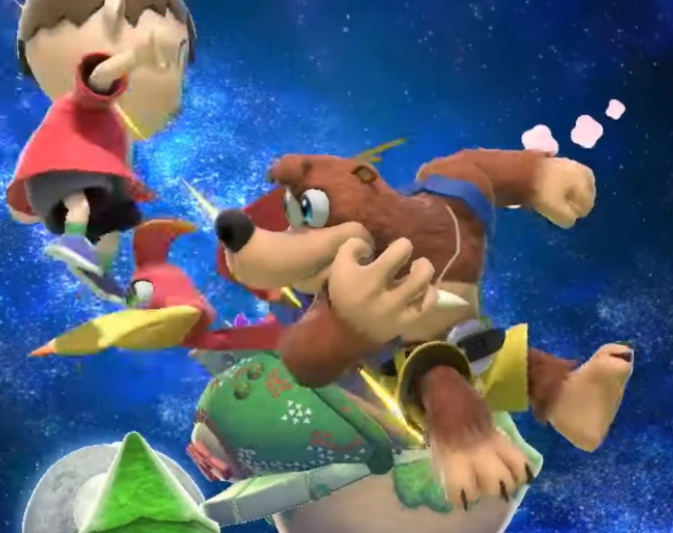 Kazooie pecks three times at opponents behind her.

Kazooie spits out an egg while stationary or while holding forward, the same way Mega Man's Neutral A (Jab) attack works. It's not shown how this move behaves while in the air. 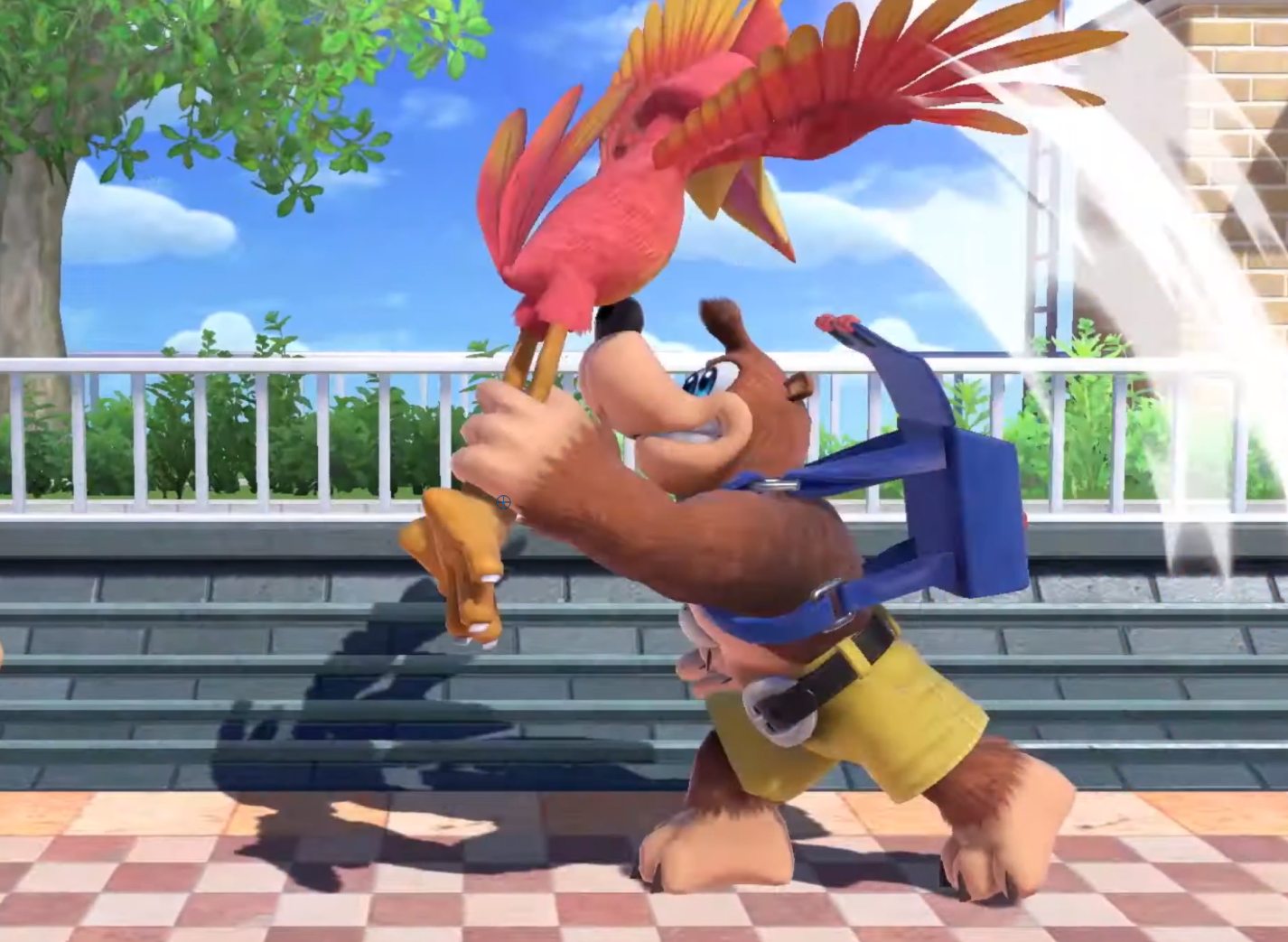 In rather brutal fashion, Banjo swings Kazooie around by her legs, bashing her body onto the ground in an overhead swing and onto opponents. This move resembles a sword swipe by many other characters, but may not share the disjointed hitbox that those moves enjoy. Since Kazooie is part of the character and not an inanimate object, attacks that clash with this move may trade attacks or win out if strong enough. A notable exception is DK, whose arms gain armor during certain moves, preventing this from happening to him. But since he's a power character, that makes more sense. Poor old Kazooie probably won't get that same benefit.

Kazooie poops out a grenade egg. Worth noting is that the egg doesn't explode after hitting the ground, it turns into an item that characters can pick up and toss, similar to one of Snake's dropped grenades. The egg also appears to come out behind Banjo, but this move isn't shown early enough to confirm if Banjo turns around while doing the move or if it will always come out the opposite direction you're facing. 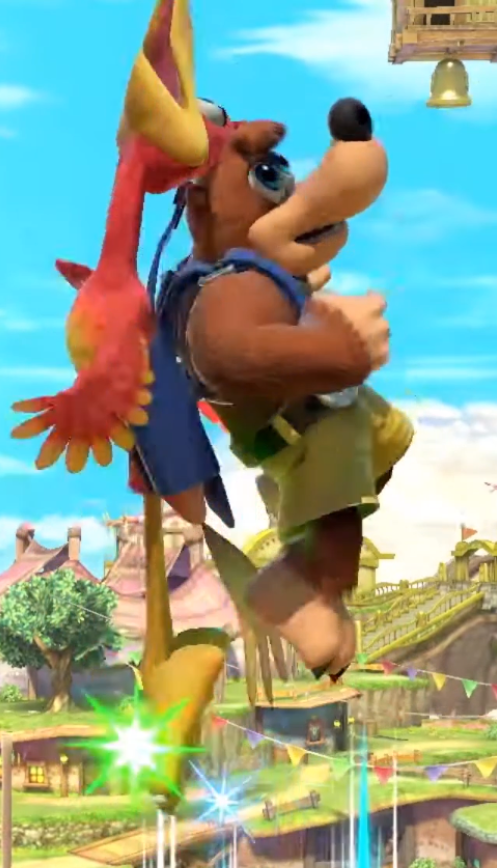 A jumping pad appears under Kazooie who then springs up, performing a high jump. The move has equal chance to do damage to an opponent above Kazooie's beak or not do any damage at all, it's not easy to tell yet. If not, then we're looking at a pretty exploitable recovery.

Banjo rushes forward as Kazooie shields them both using her golden feather powerup from the original games. This move can power through hitboxes, but it's not clear if it had a limit on how much damage it can ignore. It's shown passing through a damaging item and Bowser Jr.'s Forward Smash while also dealing damage to them. I had initially thought the golden feathers at top indicated how many hits can be absorbed, but they don't appear to tick down during the video. We also can't be sure how much distance the move covers or if it behaves differently while in the air (possibly giving them an alternate recovery option). 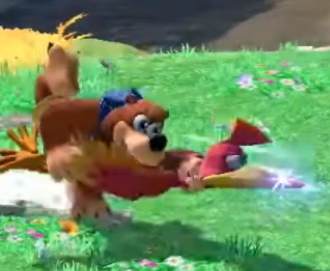 Lastly, they snuck in during a wide angle shot this demonstration of their Forward Tilt. Banjo thrusts Kazooie's beak ahead of him at a middle height, very quickly.

And that's about all we can really say unless or until Nintendo decides to release a character mechanics video at some point. They went into a lot of detail about Joker, so I'm a little surprised they haven't done the same for the soon-to-come release of Hero (god that still sounds dumb).

P.S Thanks for reading.