With the major critical and commercial success of the first Resident Evil game, it was only a matter of time before other imitators started crowding the market. Among that crowd, Sega's Deep Fear was meant not only as a rival of Resident Evil but also as its answer in the Saturn's library.

Unsurprisingly, the game failed at both counts, failing to both establish a series or make any uplift to Saturn's flagging sales. Eventually, the game was the last Saturn release in Europe and was not released in North America.

In hindsight, I can see that the game isn't actually bad in the standards of its day, but that it does not have the qualities of Resident Evil and it's better imitators that it becomes worth it to play it today. 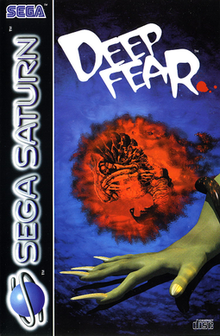 "A human being turning into a monster, what is happening here?"

The most unique aspect of Deep Fear and by far its best is the setting. Deep below the ocean floor, the game takes place in an experimental underwater lab and submarine refueling building called the "Big Table". It's a unique setting that the game utilizes well in both gameplay design and story events.

In this isolated base, you control John Mayor, who is suddenly thrust into a major crisis. Starting with the mysterious crash of a submarine that was attempting to refuel, a parasite or something started spreading around the base turning humans into hideous monsters.

Basically, this is a zombie game that is set underwater, with the zombies looking different and featuring some different water-inspired designs. From that point, the game doesn't attempt to be anything different, but its execution of the basic plot is awful. 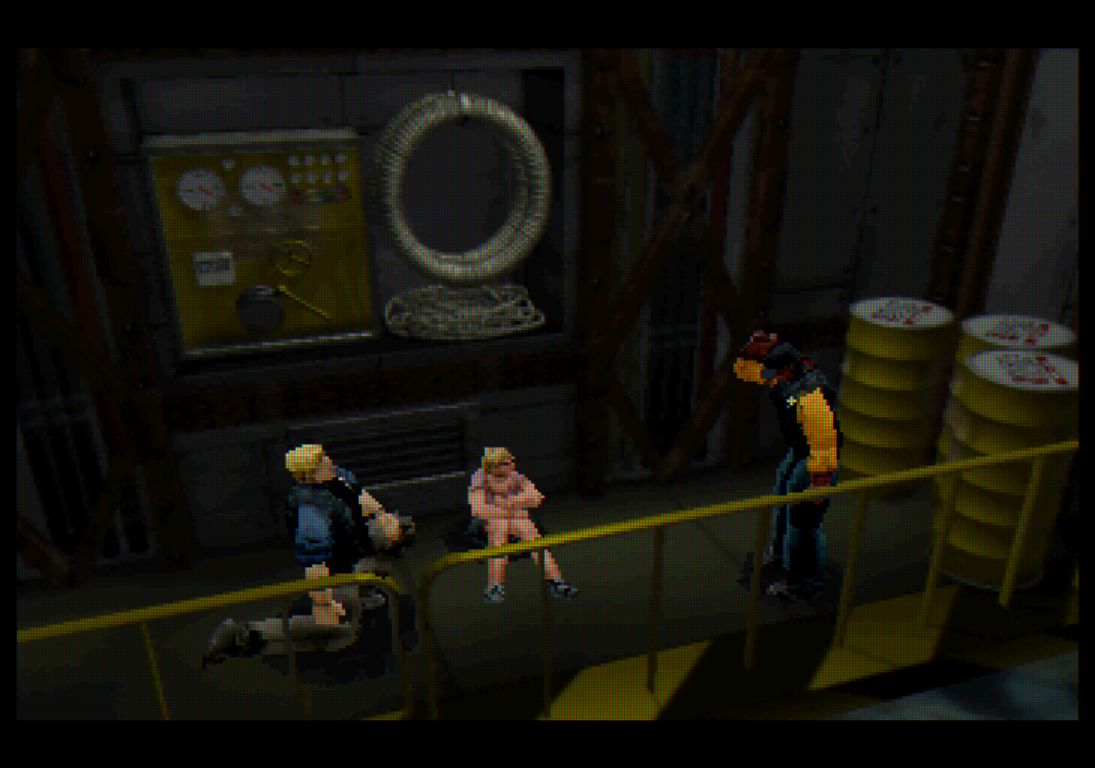 Hahaha, we will make a totally stupid and unbelievable joke as a foreshadowing of the horrible things to come

If you at any point attempt to take the game's story seriously, you will be sorely disappointed. The only way to approach the plot is to laugh at its B-Movie sensibilities. Starting with the terrible acting, behavior, dialogue, and general mannerisms of all the game's characters.

Every cutscene in the game competes with the hammiest scenes in Resident Evil, as character act and talk in stiff and robotic ways, as they continue being as stupid as they can be. Reactions to character deaths are non-existent, and the fact that no one is at all freaked out by bleeding ocean zombies is astounding.

You can detect a director's hand in all of this mess. A director who understands elements of good storytelling and drama, but, for whatever reason, was not able to employ that understanding in any meaningful way.

As such, the game's story goes beyond camp and parody and simply becomes a huge bore.

"If exposed to the outer world, as estimated 264 hours is all it would take to wipe out all the mammals in the planet"

While it is clear that Deep Fear took its core design from the Survival Horror genre, it becomes quickly apparent that it is more an action game than a survival one. This is purely due to the abundance of ammo and health items.

As such, while rudimentary puzzles, fixed camera locations, tank controls, and even the shooting mechanics are all similar to Resident Evil, the fact that there is no ammo scarcity completely changes the player's approach.

Simply put, you have all the firepower in your disposal to get rid of all the enemies you encounter. Starting from the moment you enter the room, you can aim at the enemies, even if they are off-screen, and shoot the dead. By the time you run out of ammo, you will probably be next to a storage area where you can recover all ammo at no cost. 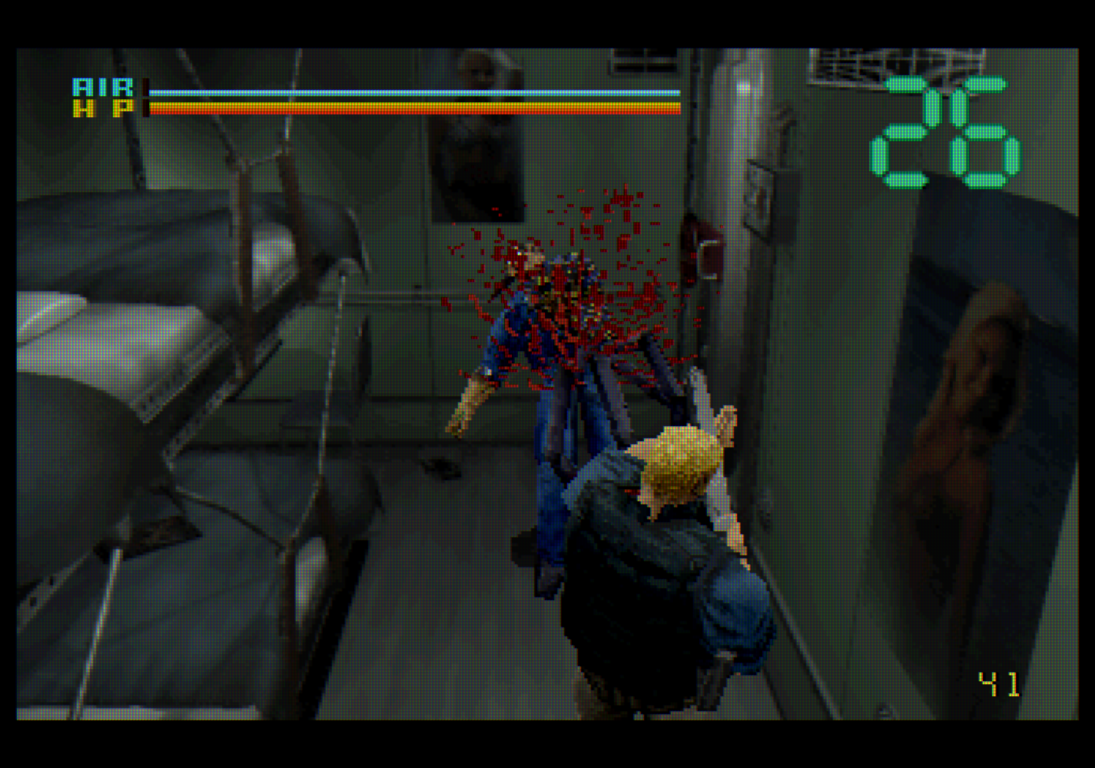 Near infinite shotgun blasts to the face

Of course, enemies can still swarm you and do some damage, at which point you can use some of the overabundant (and infinite) first-aid sprays that the game offers.

This design choice offers up combat as something to enjoy rather than avoid. Unfortunately, the clunky nature of the action as well as the limited offensive options both make anything but enjoyable.

In fact, the only element that I somewhat enjoyed is the fact that you need to keep a tab on the air supply in the base. Combat reduces the oxygen content in the air, and once it hits zero, your air gauge starts to drop.

This is an excellent mechanic that is thematically appropriate. However, soon it also becomes apparent that maintaining the air supply is very easy, as you have an abundant supply of air grenades and air system consoles to restore the spent oxygen supplies.

"The oxygen circulation system is broken. Activate the AS or else it's going to be tough"

As you can guess by now, the gameplay wasn't particularly engaging. Surprisingly, that wasn't the case in the early parts of the game. Before any of the monsters showed up, the game was effective at building a sense of tension and isolation.

Then, with a mix of exploration "quests", it introduced elements of the gameplay in a clever way. As I went inside the destroyed submarine, the ammo was truly scarce as I had no idea about the storage areas by that time, and air was truly precious. Especially when entering a flooded area for the first time and seeing that air gauge drop. 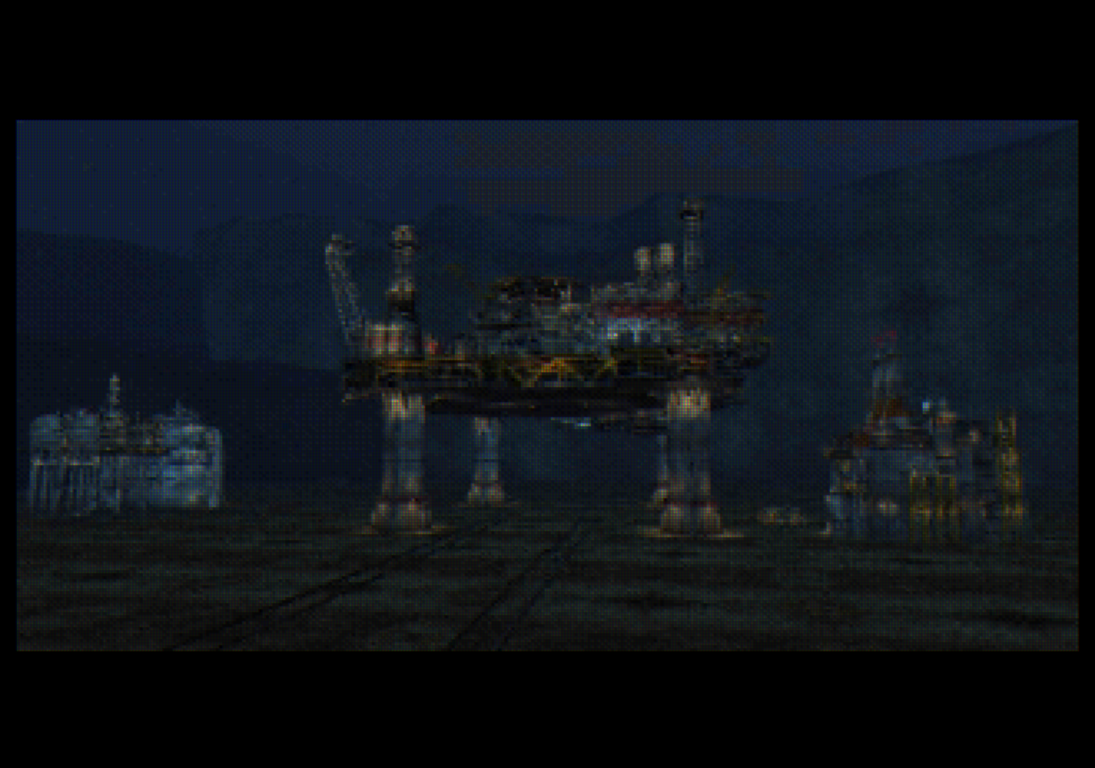 You are underwater after all

After that, the game continued offering some good micro areas such as the submarine. However, as the game opened up, and the entire base became semi-open, the design flaws became apparent.

The second half of the game is full with backtracking, where you need to go back and forth between two far away points and then back again. Apparently, the designers thought the "fun" part in that is fighting against the respawning enemies (they don't always respawn) and going back to a storage room to replenish ammo supplies.

It is in those sections that the repetitive and boring elements of the gameplay were exposed.

"Aaah, my masterpiece is ruined. Ooooh, what I am going to do"

When it was first released, the game wasn't only compared to Resident Evil because of its theme and gameplay, but also because of its graphics, which are obviously similar.

Except, it is not nearly as expertly crafted. The characters are blockier and their animation is stiffer. The environment is okay, but an undersea base is not varied looking anyways. Maybe, because they are allowed to be super grotesque, the enemies look actually "good".

One thing that is surprising is the number of CGI scenes in the game, many of which are good by the standard of the time, but look terrible today. Honestly, the directing of the scenes is where they falter, as unnatural moves and terrible pauses ruin what may have been a good scene. 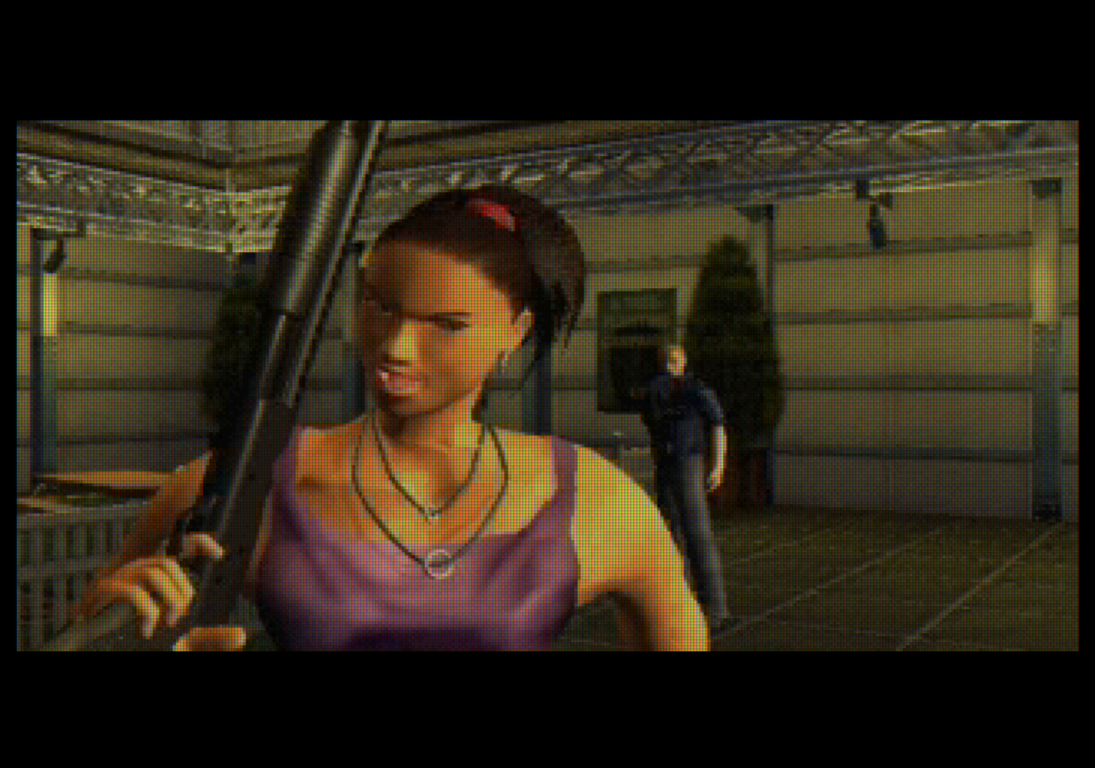 These are some awkward characters

Surprisingly, the soundtrack is really very good, with famed composer, Kenji Kawai, doing one hell of a job. Starting with the excellent opening "Visitation" to a really good boss theme. It and the really good soundtrack are both beyond the standards of the rest of the game.

Inspired by the excellence of Resident Evil but not able to capture what made it such a brilliant game, Deep Fear is only a surface level imitation that has a weaker story and atmosphere, and more damningly, much weaker gameplay.

At best, this is a playable curiosity. 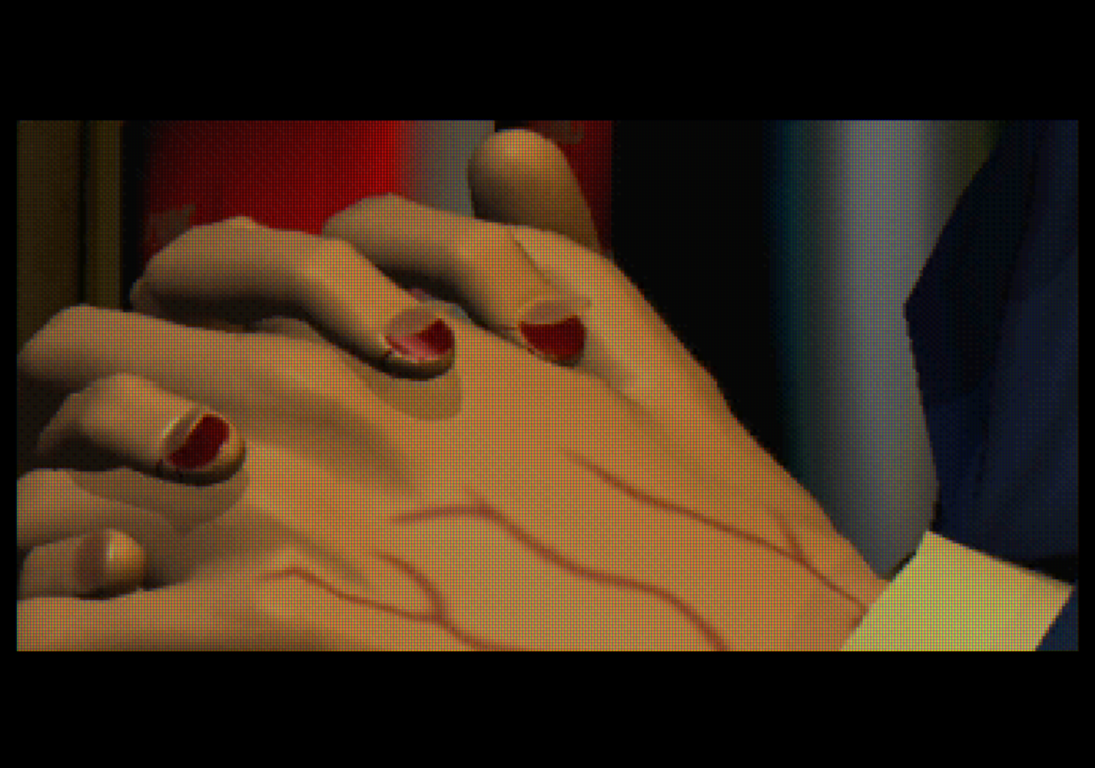 1- Shooting reduces air so take care of that.
2- Reloading, wearing the air mask, or throwing a grenade all leave you open to get attacked.
3- Use the auto-lock option, manual aiming is terrible.
4- You will need to search around the environment for extra information and some items.
5- There are many boxes with infinite smalle first-aid sprays, use them well.
6- Once you get the shotgun, always use your secondary weapon.
7- When you enter a room, listen for enemy grunts to know which type of enemy is hiding from your view. 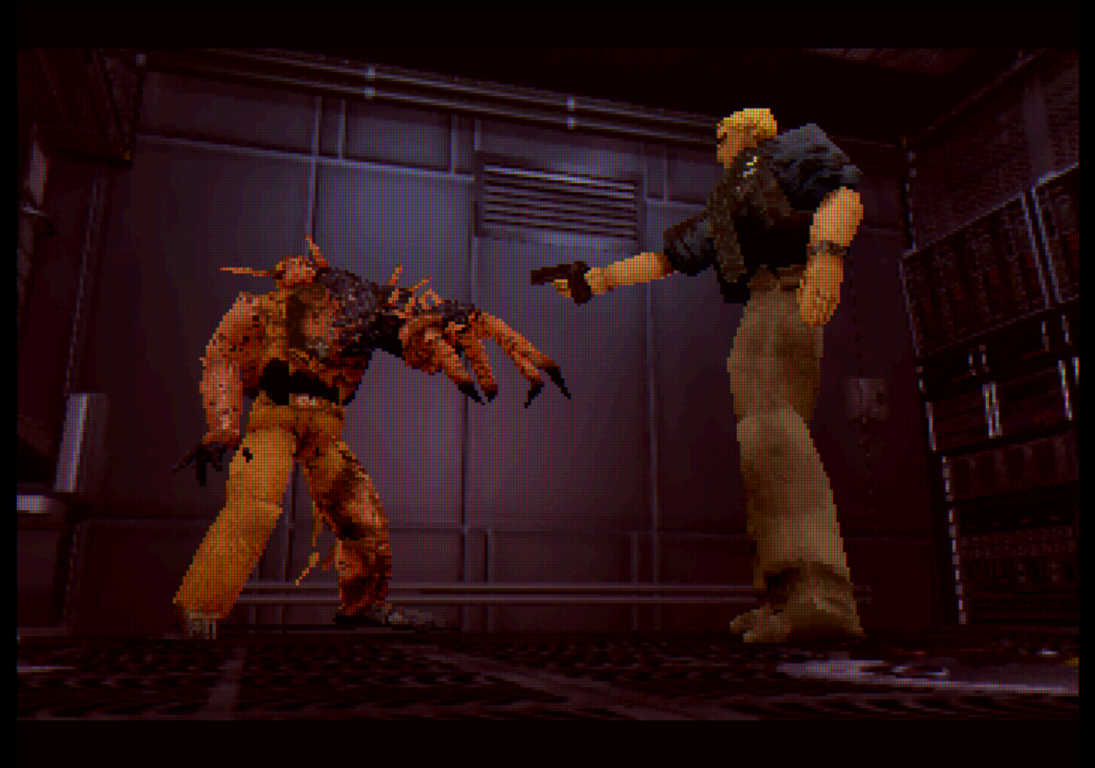 When writing the review of Deep Fear I started to realize more and more how much bored I was while playing the game. It is almost inoffensive in its boring design, which is why I didn't stop playing it but never really enjoyed my time after the opening hours.

Next game in the list is a prequel to a game I enjoyed on the Genesis. Legend of Oasis at #38 is an action adventure game that looks like it would be right up my alley.