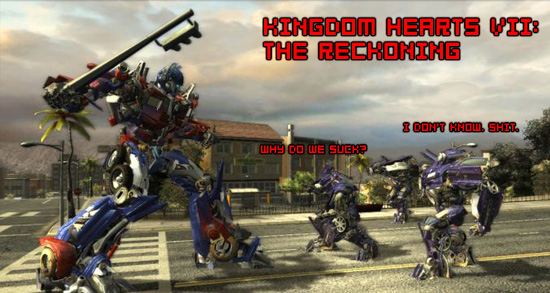 The original Beast Wars game's suckiness is almost forgivable, as it was the first attempt at adapting the Transformers saga into a modern video game format. But now, in 2007, how did we end up with the fetid waste of pixels known as "Transformers: The Game"? Melbourne House already proved that a good Transformers game was possible, so how did Traveller's Tales (I'm basing this on the PS2 version of their game) completely and unforgivably fuck it up? Transforming alien robots, big city environments, guns, explosions, throwable ambulances - HOW DID THIS GO WRONG? And no, you can't blame this on Michael Bay, whose cinematic version of the Transformers was the basis for this. Even Bay's film had its joyous moments. This game commits the most heinous of gaming sins: It's a chore to play.

Naturally, as with any movie adaptation, the game follows the plot of the movie. You choose to play as either the Autobots or the Decepticons, and you are placed in a free-roaming environment with around a half-dozen missions ("chapters") that you can choose to play through. See, here's the big problem: These missions really, really suck. Remember how, in the Spiderman 2 game, the missions, like saving a kid's balloon or stopping a car full of bank robbers, became monotonous after a while? In Transformers: The Game, they're monotonous right out of the gate. Among these annoying, mundane tasks: Escorting your apparently-helpless Decepticon comrades from point A to point B to point C, etc.; trying to reach point B before a Decepticon does, then trying to reach point C before he does, and so on; and destroying a certain number of army jets before the timer runs out. Ugh, this is what can make free-roaming games an absolute pain in the ass. The Transformers Armada-based game succeeded largely because it dropped you into an open environment, gave you a general, all-encompassing task, and let you decide how you went about it.

Beyond that, the gameplay and the environments are dull and lifeless. Prior to the game's release, I was looking forward to controlling the Transformers in active, urban settings. Instead, I got boring, monotonous cities lacking in any interesting details, graphically or otherwise. The graphics are bland and sickly. It's not even fun to blow apart buildings and shoot up cars, because the robots' weapons and the explosions they produce are weak and piddling. Now, granted, I've only played the PS2 port of the game, but when all the console ports of this game are getting panned by reviewers, I can't just assume that the PS2 version is merely the weak link. Hell, the two DS versions recieved better reviews than the others. (The PSP got the worst, by the way.) This is everything a movie-to-game adaptation should not be, and everything it usually is: An inept, boring walkthrough of the movie.

Are there any positives? Well, almost. The Decepticon half of the game almost redeems itself, allowing you to win the game, kill Prime, and actually conquer Earth. The joy of this, however, is squashed almost as soon as it starts, given that the ending cinematic lasts barely ten seconds. You can also unlock the ability to play as either G1 Optimus or G1 Megatron. These character models are decent, though lacking in detail, but they play exactly like the movie versions, so most of the fun is noticeably absent. When Megatron has a big honkin' cannon on his arm, it should fire like a big honkin' cannon, not a whispy pea-shooter. So, okay, I guess there aren't any positives.

Man, that was depressing to write. I am one of the most devout "TransFans" (yeah, giggle away, asshats) you will ever meet in your casual, everyday life. I want nothing more than the sheer joy of sitting down and playing through an interesting, engaging, fun Transformers game. I want to fight Devastator, I want to chomp through Sharkticons as Grimlock, I want to gun down hordes of semi-recognizable Decepticons as Optimus Prime while "The Touch" blasts in the background, I want to sneak around Cybertron and eject cassette tape minions from my chest, and... Well, is any of that too much to ask? Hasbro? Are you listening? When will a game developer come forth in this time of great need and light our darkest hour? Is the formula really that hard to get right?

I still have hope...
#Community
Login to vote this up!