6:45 AM on 11.21.2007 (server time)    0
So, the new GhostBusters movie is going to be a game, and as there is no universal game console format (yet) as there is with DVD, the games creator's must come in two seperate flavors, one for the PS3/360 and the other for the Wii/PS2. Can you imagine the outrage if a movie had to be made twice, once for DVD and once for VHS? The film industry wouldn't put up with that crap, and neither would movie studios. But we gamers, both on the development and consumer side of things, have learned to settle for less.

Little has been seen of the Wii/PS2 versions of the new Ghostbusters game, until now. GameInformer #176 has all the deets, including an interview with Dan Aykroyd, tons of screen shots, and the debut look at the Wii/PS2 build of the game. I don't know what took them so long, as more people will likely be picking up the Wii/PS2 game than the PS3/360 ver, what with the Wii and the PS2 having the largest worldwide install base in all of consloe-dom. Maybe the Wii/PS2 version is not as exciting a prospect to the games creators. I for one prefer the Pixar-ish look to the game. Realistic pocky faced Virtua-Bill Murray FTL.

Anyway, on with he scans. 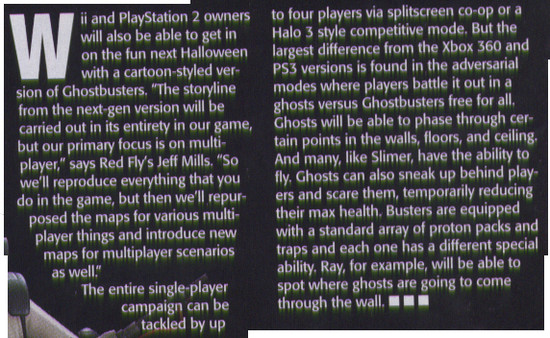