Time for another off-kilter pick for a game: a licensed game based on a Finnish movie from the 1980s.

Numbskull Emptybrook is apparently an English name for Uuno Turhapuro, and the name I'll use in this blog. He featured in 19 Finnish movies between 1973 and 2004.

By some virtues I'm not going to try analysing, he was a massive hit in Finnish movie theatres. Unlike presumably Homer Simpson, "uuno" has actually found his way to the Finnish dictionary with the meaning of "fool", "stupid" or "yokel". Truth be told, I don't know if the noun "uuno" got its meaning from Numbskull or if it had it already previously.

Born and raised in the countryside, Numbskull ends up in the "big city" and marries Elisabeth, the daughter of a wealthy mining magnate, whose first name varies from one movie to the next; let's call him Amadeus now. Typically, Numbskull ends up making trouble for Amadeus, who'd like nothing better than seeing him gone from their lives.

So, on to the movie that was licensed for a game: Uuno Turhapuro muuttaa maalle (1986), or as I'd translate it, Numbskull Emptybrook moves to the countryside. Amadeus has bought a mansion in the countryside for a low price, and as he's enjoying a relaxing vacation without Numbskull around, Numbskull walks into the room and measures where a new highway will be built: right through the mansion. Amadeus attempts to get the road plans changed, but not succeeding the way he'd want it to happen.

I recall reading somewhere that Ernest P. Worrell was "America's Uuno", but I don't think that's fair for Ernest. 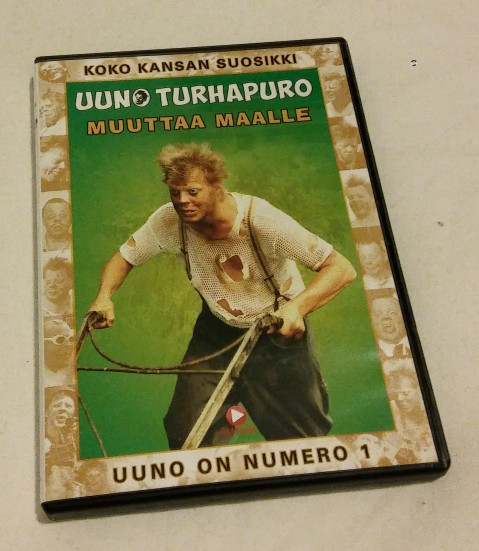 A DVD-box with Uuno using a plough like in the game. Amusingly, even the back cover of the box mentions a video game was based on this movie -- it doesn't bode well if that's a selling point for a movie.

For the benefit of this blog, I watched parts of the movie for the first time in 20+ years. I had happily forgotten various parts of it.

This is said to be the first Finnish movie to have a commercially released game based on it. The game shares the name with the movie: Uuno Turhapuro muuttaa maalle (Amersoft, 1986). Three scenes from the movie are used in the game as separate levels:

In each level, Numbskull is in the middle of the screen and he keeps running/waterskiing to the right while avoiding obstacles. Like a review at Pelaaja [3] says, the levels are more than palette/tile swaps: only the first level has a meandering road to stay on, the second removes that and the third adds obstacles like Amadeus that move towards the player (although I did spot a moving snorkeler in the level 2 of a longplay).

On the plus side, this isn't a platformer Ocean would've produced or a minigame collection. On the negative side, it really isn't a very complex game, using only up and down as the keys and reportedly a very difficult one, which agrees with my memories. For a video review in English by someone else, you can check this.

One key factor in the difficulty is that Numbskull is in the middle of the screen, unlike in modern automatic runners. That leaves little time to react to what's coming up ahead, and for some reason (I'd guess graphics constraints), Numbskull appears to be closest to the right edge in the first level. The levels are also procedurally generated [1] with occasional landmarks here and there.

The game's coder, Pasi Hytönen, was still in highschool when he got the job of writing the game in a few months (because it had to be done for the Christmas market). So, he started in late July/early August, school started in mid-August and the game was done at the end of September [1]. The music was written by Jori Olkkonen, who made music also for Jukka Tapanimäki's Netherworld (Hewson, 1988) (on THEC64 Mini, if you got that).

When I played the game in the early 1990s, I never got further than the early 2nd stage. The game was definitely difficult. Of course, there is now a longplay on Youtube, although the player doesn't reach 2 million Finnish marks which apparently would reveal the true ending, with Numbskull buying the mansion from Amadeus. Hytönen himself said [1] in 1987 that he hadn't managed to get the real ending either. As it appears, the producer asked the programmer to tone down the difficulty [2].

It appears that the game has some value for collectors [4]. The game was released on diskette and cassette (in total about 2000 copies were sold, less than 100 of them on diskette [2]), and one cassette copy was in sold on a Finnish net auction site for 252.5€ in 2014. Reasons for the collectibility, as given in [4], include being the first game based on a Finnish movie and, well, a movie series with 19 entries must have had fans.

And here's a question to you... what are the oldest video games based on movies from your country?