Early fans of Sega would recognize Climax Entertainment as the team responsible for many of the best games of the Genesis. They helped Camelot Software with the first two Shining games, and they made the critically and commercially successful Landstalker title.

Taking a cue from that latter game, Climax Entertainment wanted to make another Action Adventure game on the newer consoles, but they struggled with developing in 3D.

Which is why they went back to what they knew best, and developed another isometric game that uses polygons only sparingly in the environment, but otherwise is mostly a sprite-based isometric game.

The result is Dark Savior, which is thankfully still playable today because its graphics aged semi-gracefully, and that's good news because we would have otherwise missed a very good game. 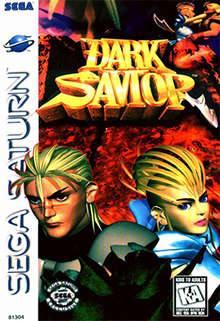 "What is it about this island...? What kind of evil things happen here?!"

Dark Savior starts with a scene outside of a transport ship. A bounty hunting crew, led by the main character, Garian, have captured a vicious monster. This monster, Bilan, is to be transported to Jailer's Island to be executed.

Predictably, the monster escapes during the transport and Garian must track it (him?) down to kill it while it roams and wreaks havoc in the prison island. Complicating matters is the fact that the prison warden is not a straightforward character, and the prisoners are planning a revolt. Also, Bilan has the ability to impersonate any character it comes across (and kills).

That in itself, while pretty straightforward, is a very good setting for the story. This is further reflected by a decent translation that manages to give a good characterization of the many players in the story. 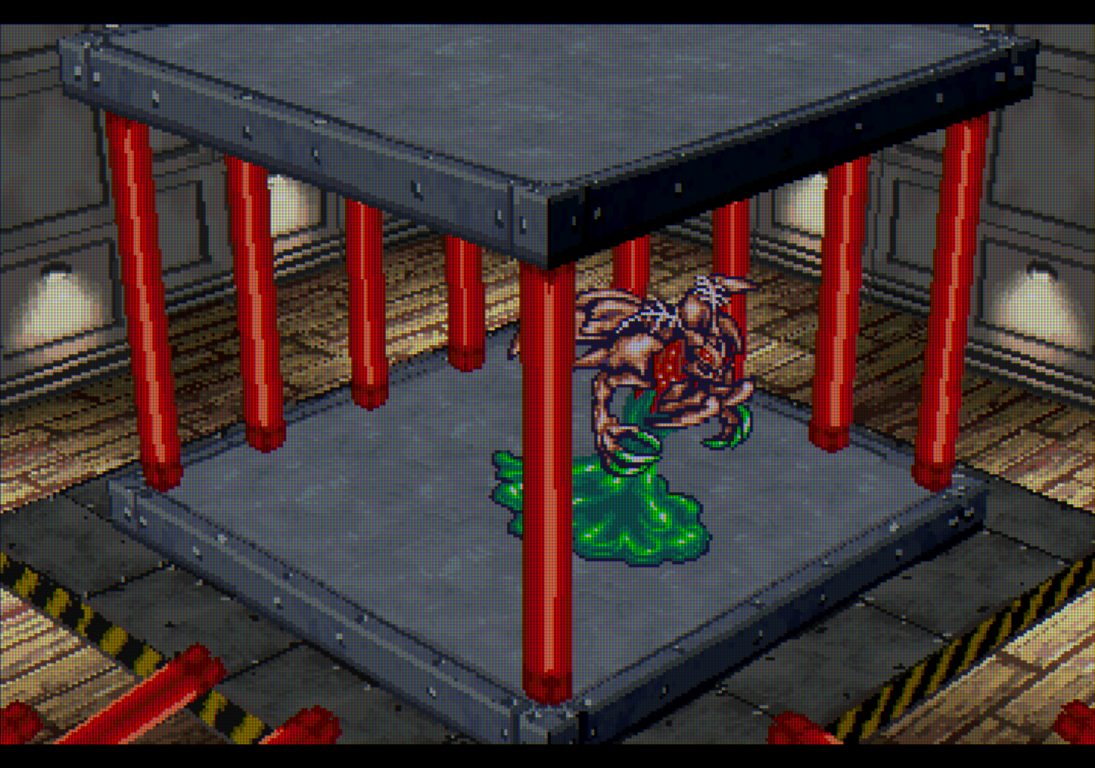 However, what truly raises the story in Dark Savior beyond the bar is the fact that it has multiple parallel stories instead of one. During the beginning of the game, you are tasked with reaching the captain's cabin as fast as possible. Depending on your time, the game diverges into one of three paths.

Each path is worth going through to see how much a single decision can affect the overall story and the lives (and deaths) of those whose fate is intertwined with Bilan and Jailer's Island.

"It will be a world of evil, by evil, for the sake of pure evil. There is no place for you there"

Expectedly, the path where you reach the captain's cabin late would have the worst final outcomes, and that's obviously by design.

The player wouldn't be expected to be able to grasp all the complexities of isometric platforming in his first five minutes with the game, which will result in getting to the captain late the first time you attempt it.

That's because Dark Savior's gameplay depends heavily on platforming in an isometric field, which requires some adjustment as you figure out the directions and the ability to direct your jumps and runs. Diagonal movement is still a pain even at the end of the game but everything else became simple to do. 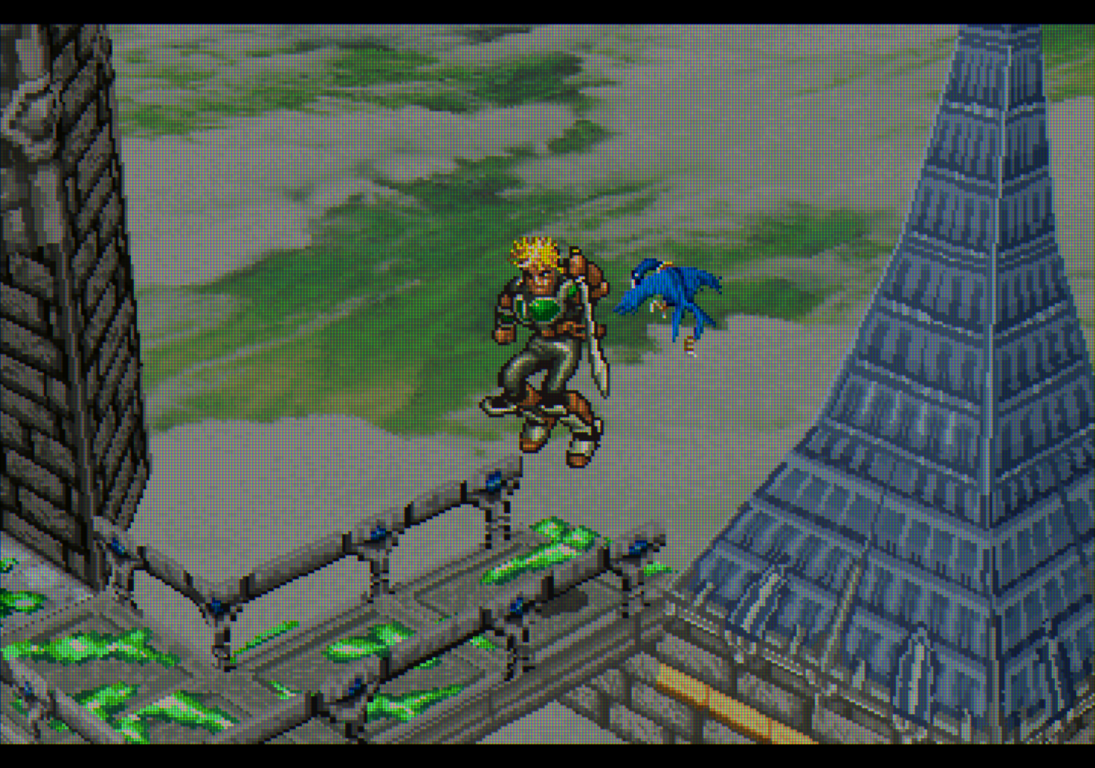 As simple as isometric platforming can get at least

It is important to state that platforming will be about 80% of the gameplay in Dark Savior, as traversing the island's many locations is simply traversing a series of isometric platforming challenges. Many of these are not difficult at all once you get the hang of the controls, but a few do require some light puzzle solving.

What is challenging, and it did become second nature later, is the ability to move quickly in an isometric field. This is obviously needed to gain access to the other parallel stories after you finish the first one. One thing you should not is never to underestimate your running jump.

"I know now you are a brave knight. You have the skills to defeat Bilan"

The other 20% of the time you would be fighting your enemies in one-on-one fights that are a little bit like fighting game matches, but with very limited controls. You square against the enemy in a linear field and have access to two attacks, a jump, and a special.

Fights can feel like intense affairs at first, with a rapid back and forth between you and the enemy until you realize that you could spam your knock out attack infinitely and easily cheese most of the game's fights. 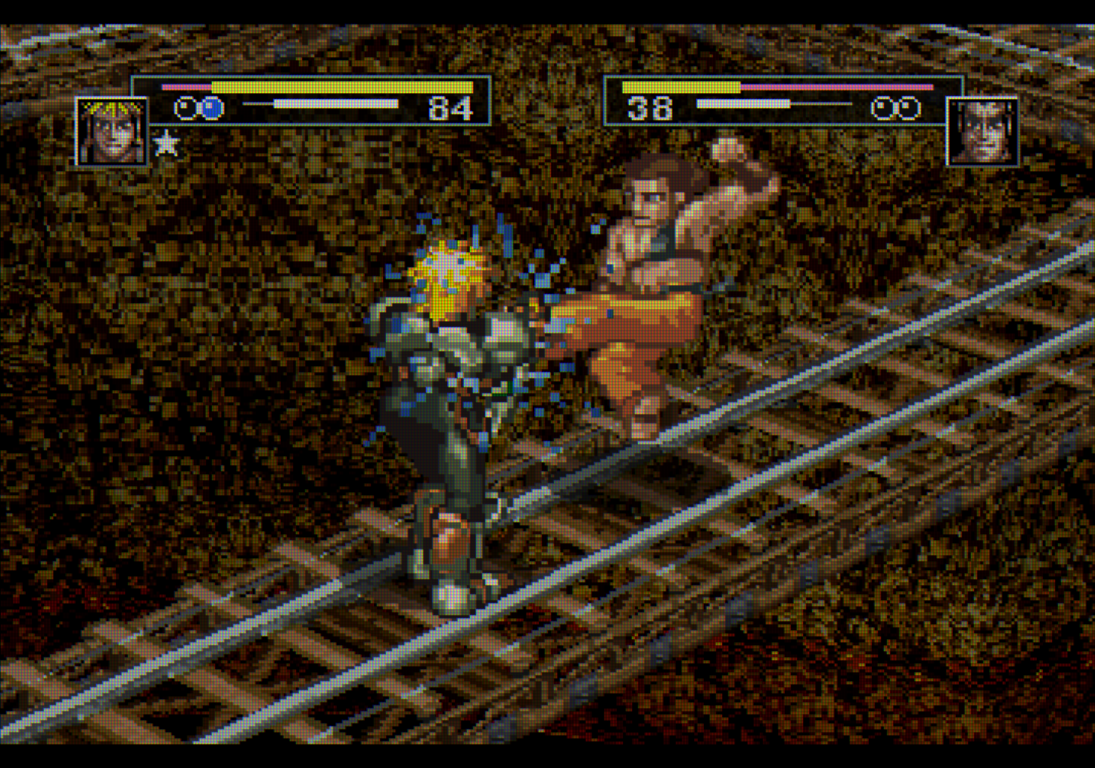 Unlike most fighting games, drop kicks are not your friend here

At least, you don't need to use Garian for all the fights. With his special ability, Garian can capture some of his enemies when defeating them (to capture an enemy, knock them down while they are at low health and use a special move). Then, you can use these captured enemies in fights for a little bit of variety, even if the underlining mechanics do not change.

In theory, the one-on-one fights should be action-packed and exciting affairs, which they are to an extent. While fun, they are really easy, and you cannot but wonder if a more strategic turn-based dueling system would have been more exciting in the long run.

Finally, let's talk about the game's production values, which thankfully have not been fully ravaged by time.

With its choice of using 2D sprites mapped into a 3D isometric field, Dark Savior managed to preserve the look of their characters, even if the environment appears to be largely bland. Character sprites are big and detailed, and their portraits (which I wish were shown when they talk) are nice enough.

A highlight of the game's graphical design is the varied design of the game's characters, who come from many different backgrounds and species. It suggests a rich and interesting world, even if a translation error suggests India exists in this world. 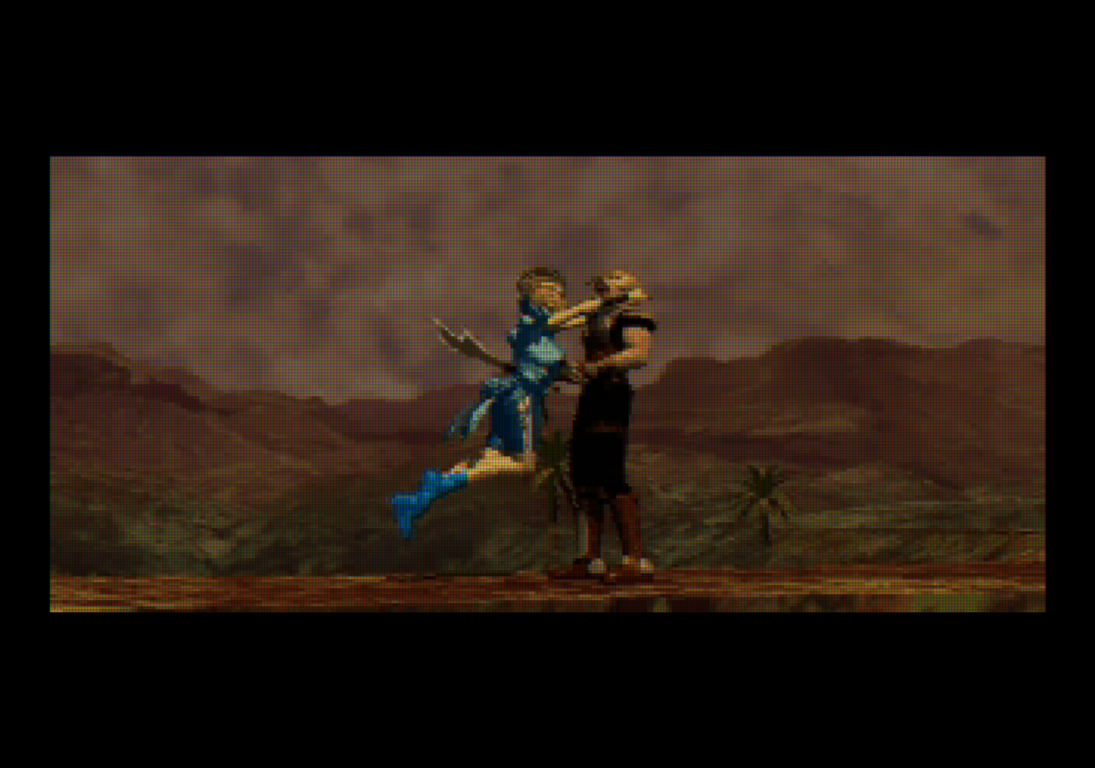 Aside from the game's graphics, the game's soundtrack is top notch. There is an excellent use of drums; a foreboding beat like in Bilan's theme, or the exciting percussion of "The Battle". Then there is the variety; from the emotional "Friendship with Garian" to the epic "Decisive Battle".

It's a soundtrack that is best in its totality even if no tracks truly standout. There is an impressive variety of instruments used, and it is honestly one of the best soundtracks I have listened to on the Saturn so far.

There is something weird in my review of "Dark Savior" so far. While I see that taken individually, the game's various parts would not produce a good game, it somehow does here. At no stage did I feel like I didn't want to see what the next parallel story would reveal, and instead would have appreciated one or two more.

I cannot honestly say that playing the game should be fun. The platforming, even after you get used to it, is nothing special. Also, the fighting isn't that impressive either.

Yet, maybe because there was a lot of heart put into the game by Climax Entertainment, the game continued to absorb me even when its gameplay infuriated or bored me at times. Eventually, I just started enjoying myself, even while wishing the game had that extra polish that would have made it a great game. 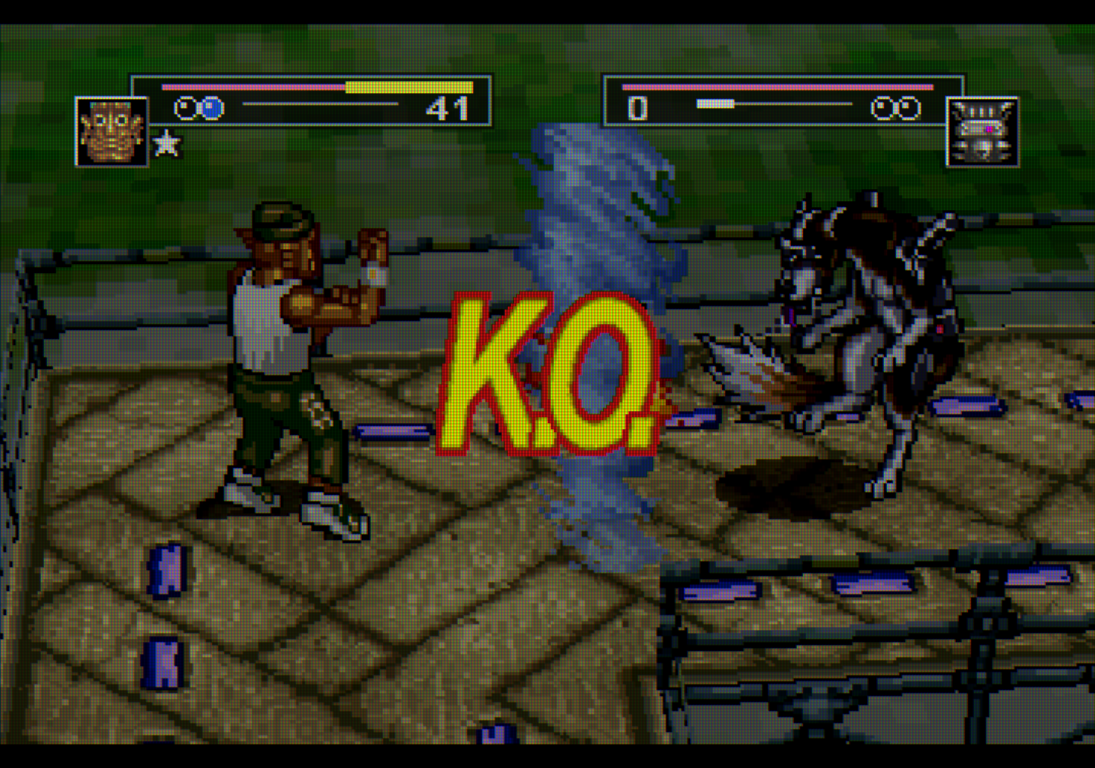 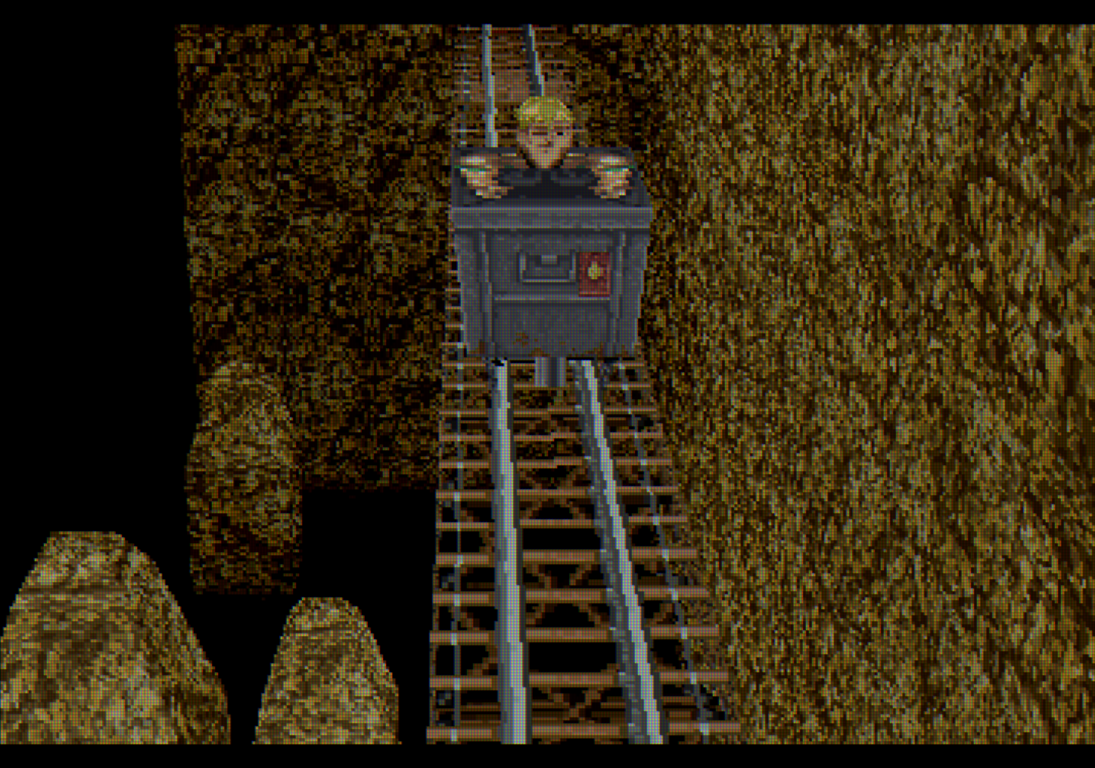 1- Try to immediately get used to the unique isometric platforming system.
2- Practice changing directions mid-jump.
3- Practice moving and jumping while dashing.
4- To capture an enemy, knock them down when their health is low and do a special move. This means that you should have a nearly complete special bar when attempting to capture.
5- Your running jump covers a lot of distance and can be used to take short-cuts.
6- To access the different parallels, then at the beginning of the game when you are asked to reach the ship captain's cabin: P1) Reach the cabin in more than 4:30 minutes, P2) Reach the cabin between 4:30 & 3:30 minutes, P3) Reach the cabin before 3:30 minutes. 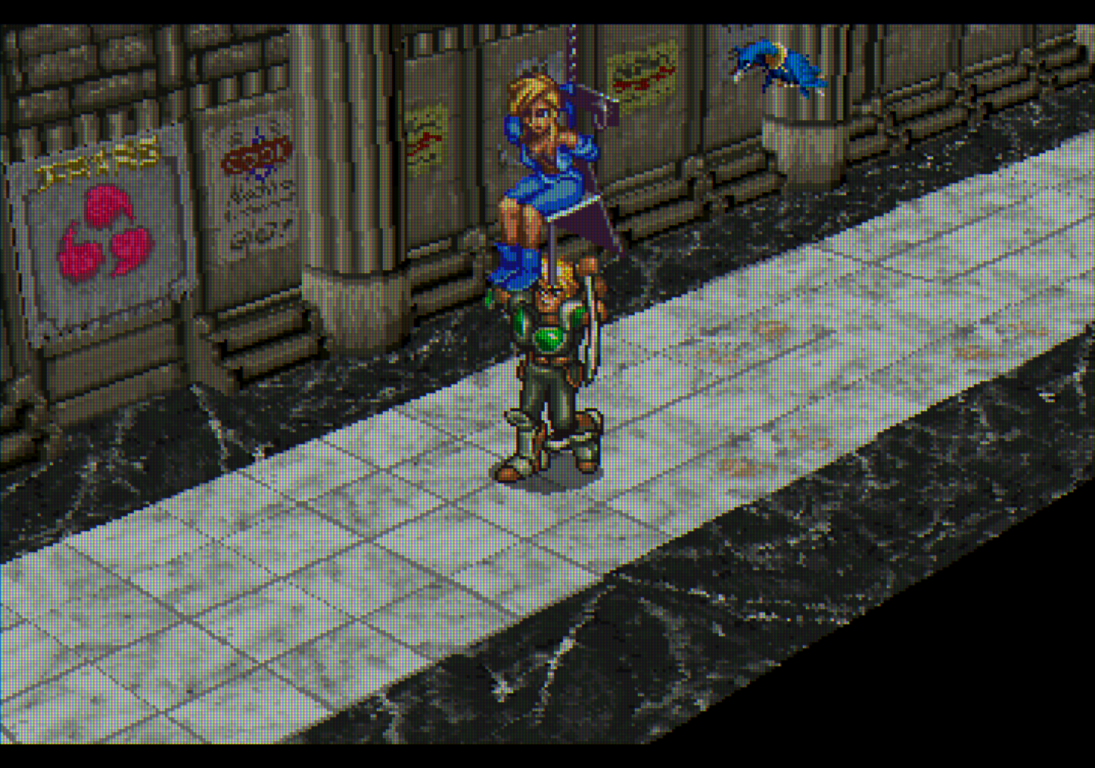 Yes, Garian is carrying around a girl tied to a chair

I am hoping Dark Savior to be the start of this list only getting good games on the 8-10 range. I wish I could have given this game a higher score, but it did have some serious weaknesses.

Next in the series is the last game released on the Saturn in Europe. Deep Fear, at number 39 in the list, is a survival horror game that I expect has not aged particularly well. So, my wish may be reserved for the game after it, but let's hope I am wrong.