Borderlands 3 leaks brought to life, and other neat tidbits

The other day, YouTube recommended a video to me explaining all of the elements presnet in the Borderlands mask of mayhem teaser. The guy in the video started comparing certain characters to some leaks that happened in December, which I was hearing about for the first time. Sure enough, everything started to line up when the proper trailer released. It turns out, we know a bit more about this game than we thought!

First, let's take a look at our new playable characters (note they have 3 action skills this time): 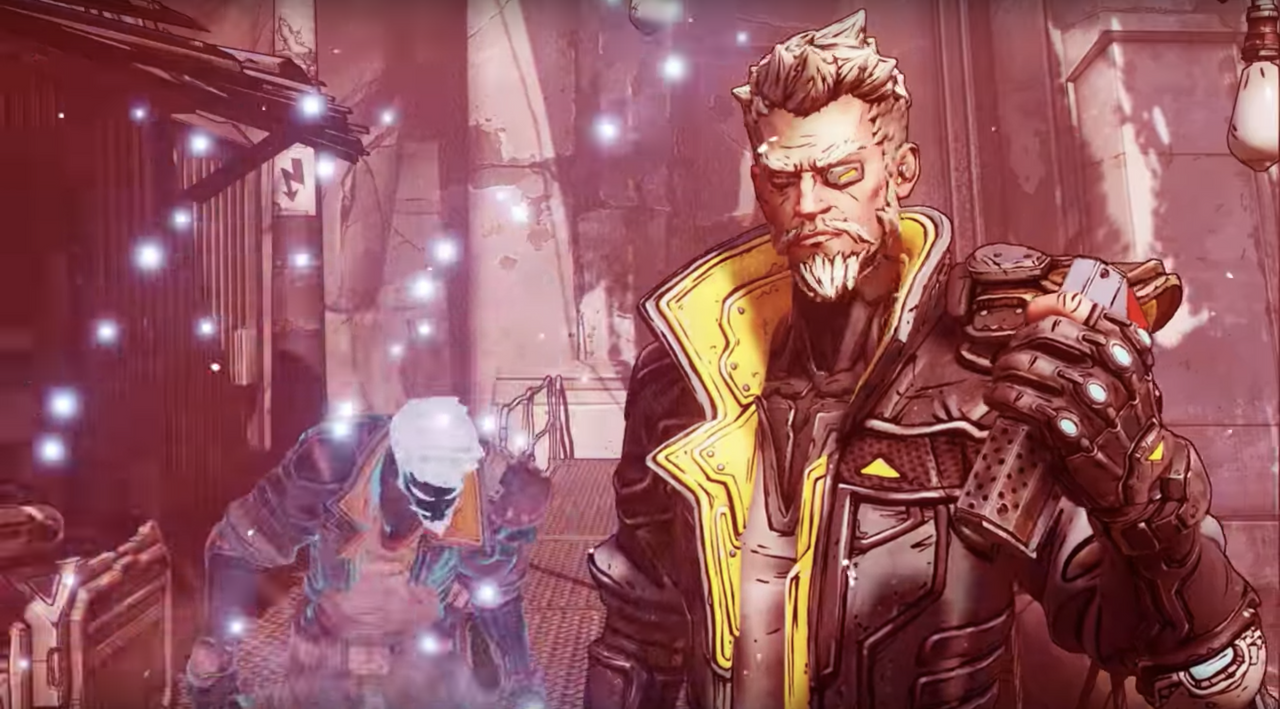 He's described as a wealthy individual who uses "gadgets". A lot of people are calling him an assassin and comparing him to zero, but he sounds way more like a secret agent to me. One of his action skills is the ability to create a hologram of himself. We're not sure what this does yet, though. It could attack enemies, or it could just be a decoy.

I'll take this opprodunity to speculate on a couple of things. In the following picture, a drone is visible flying between Zane and Moze (that's the girl with the helmet). It could belong to either one of them, but I'm thinking it's Zane's based on the fact that he uses gadgets and that it matches his color scheme. 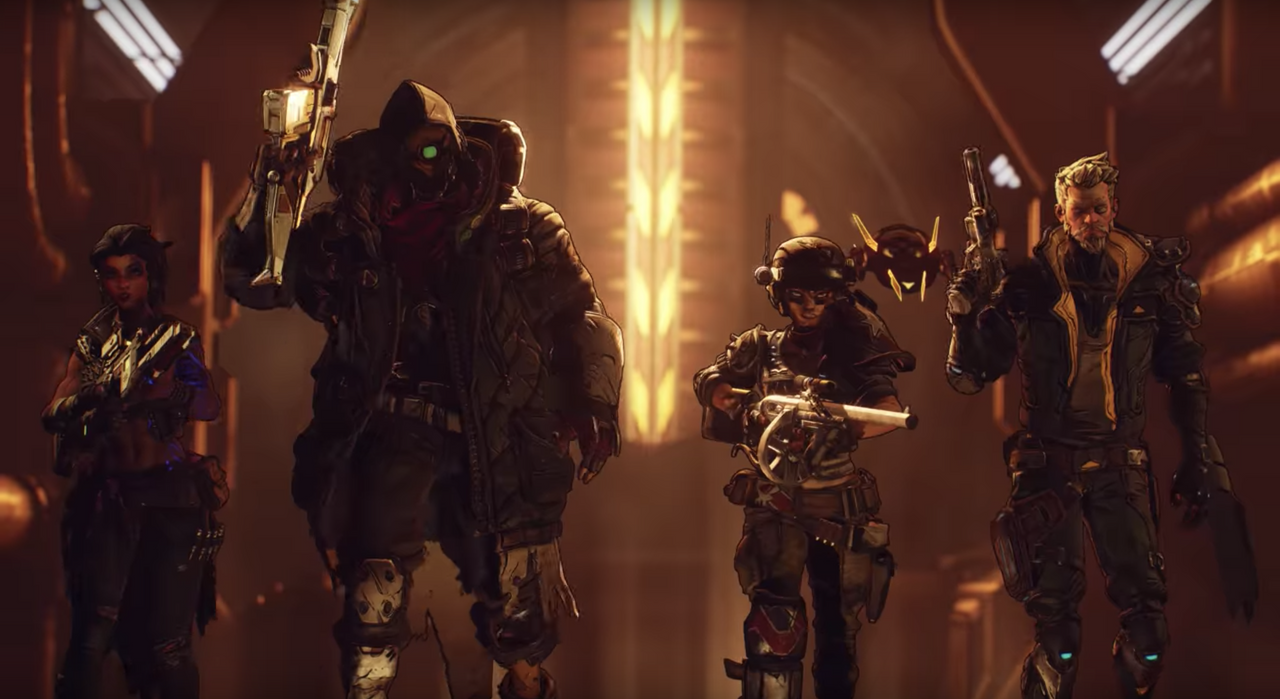 Also pictured here is some kind of doohicky on his arm that looks a bit like a claw. It's not anywhere else in the trailer that I noticed. It might be a melee weapon, though that seems unlikely given the context, or it might be related to the drone. Maybe he sends and retrieves it from his arm?

Finally, I speculate that the walking gun is probably one of Zane's action skills. 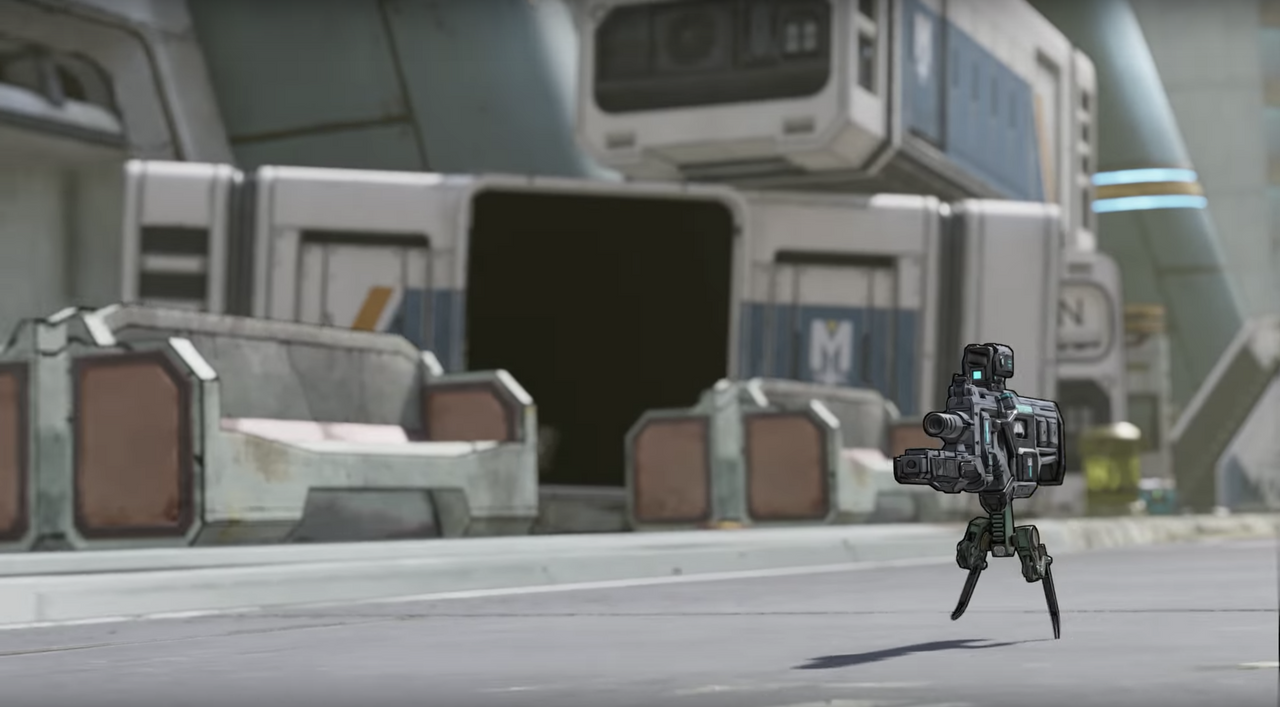 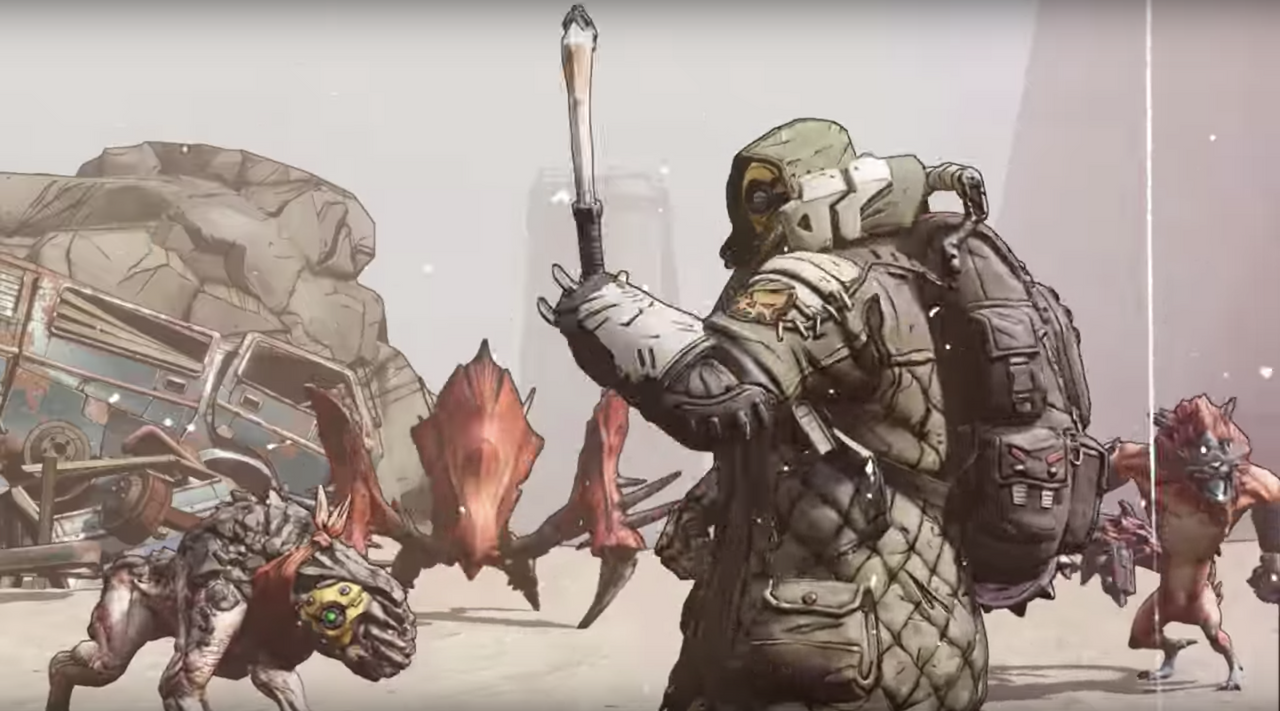 Flak appears to be a robot, but he could possibly be a cyborg. Although no organic parts are visible, Wilhelm was just a regular guy once upon a time before he became more machine than man. Flak can summon three different pets with distinct abilities. It seems pretty clear to me from this screen shot that therse are his pets: a skag, a spiderant, and an entirely new enemy that may or may not be able to weild guns. It would appear that this thing shows up later in the trailer, revealing that it can climb vetical serfaces. 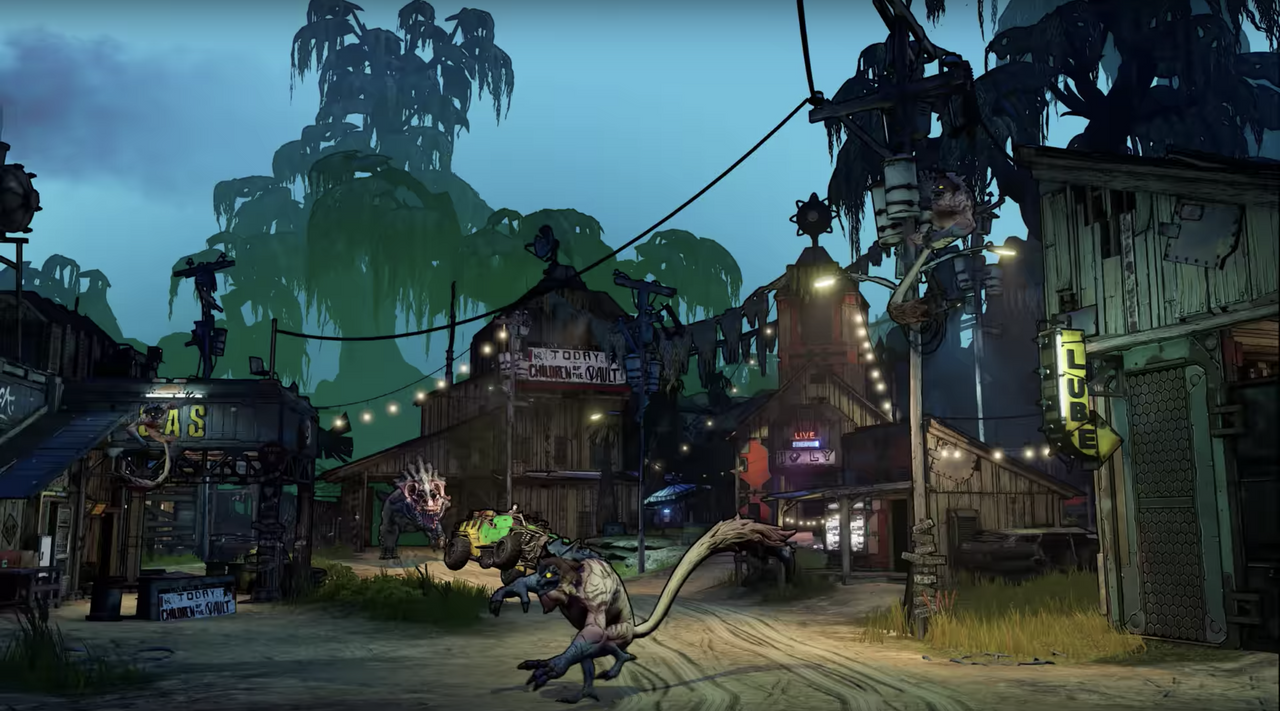 Here's a better picture of Flak with is skag buddy: 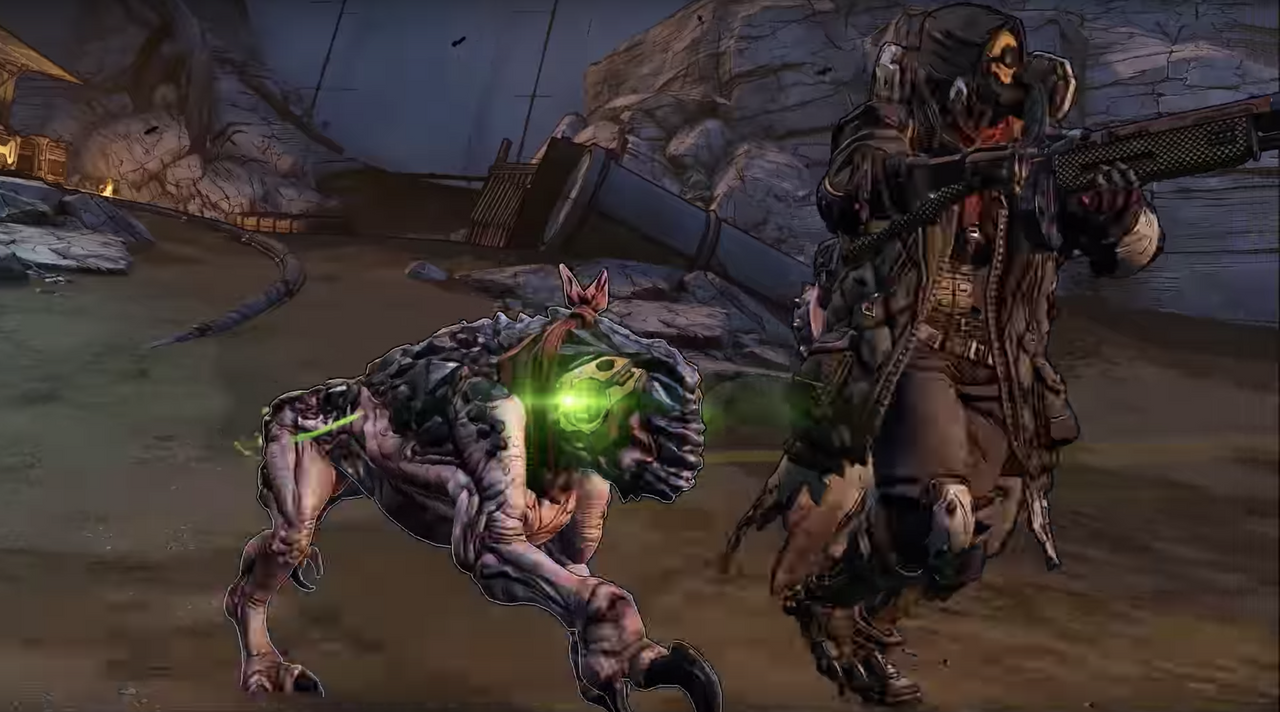 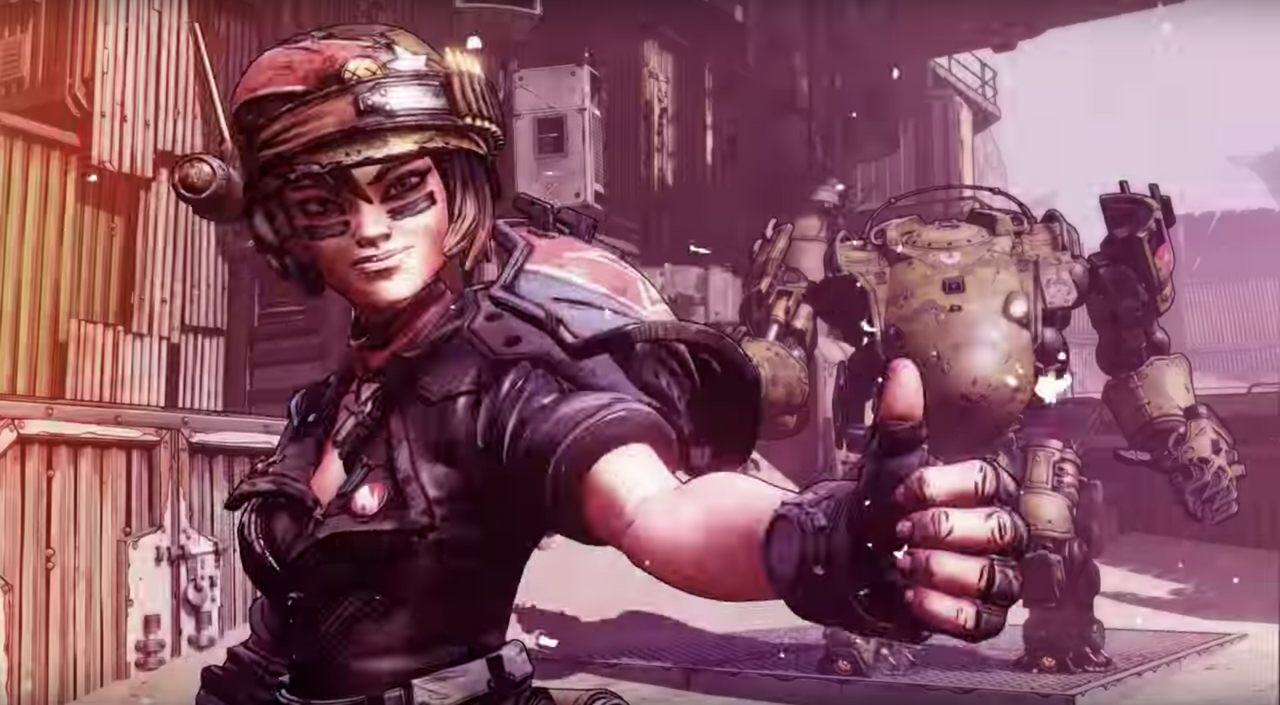 Moze can digistruct a mech called Iron Bear, and has an ability that lets other players ride on top and operated a turrent, as seen here with Zane: 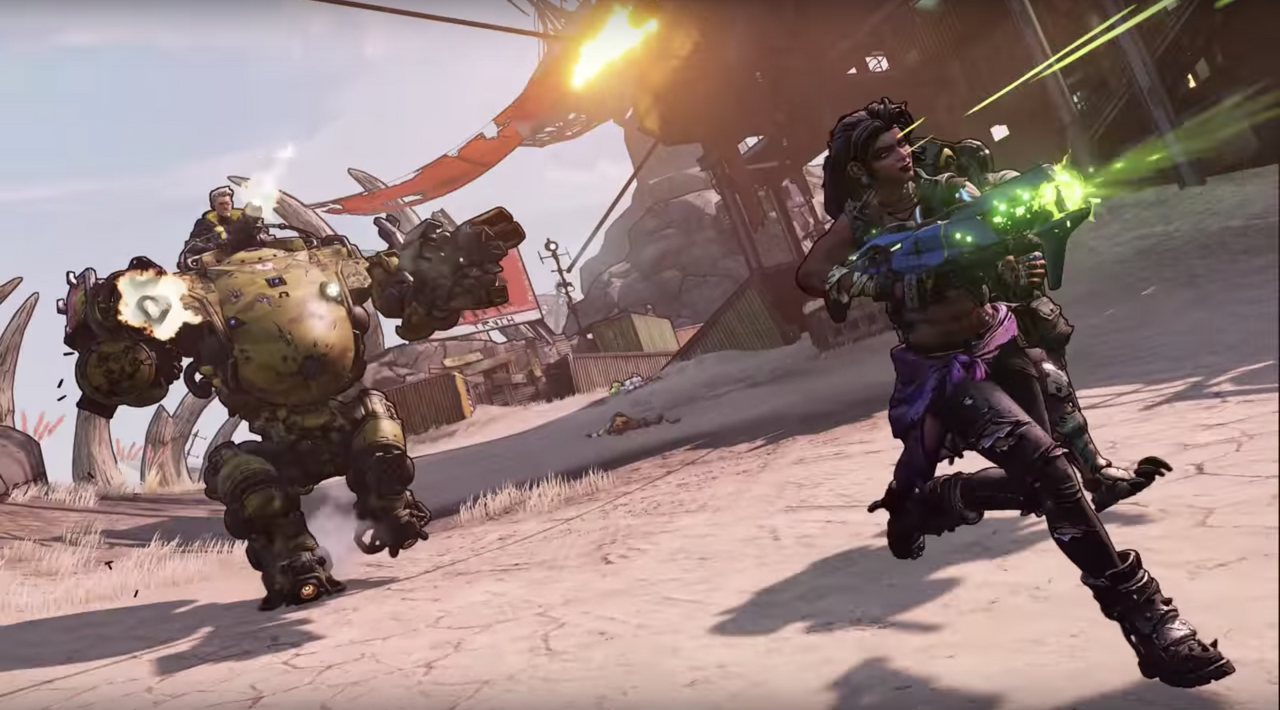 There's nothing other than the mech that can be for sure attributed to Moze, but based on her class name I think her abilities will probably focus on Iron Bear. 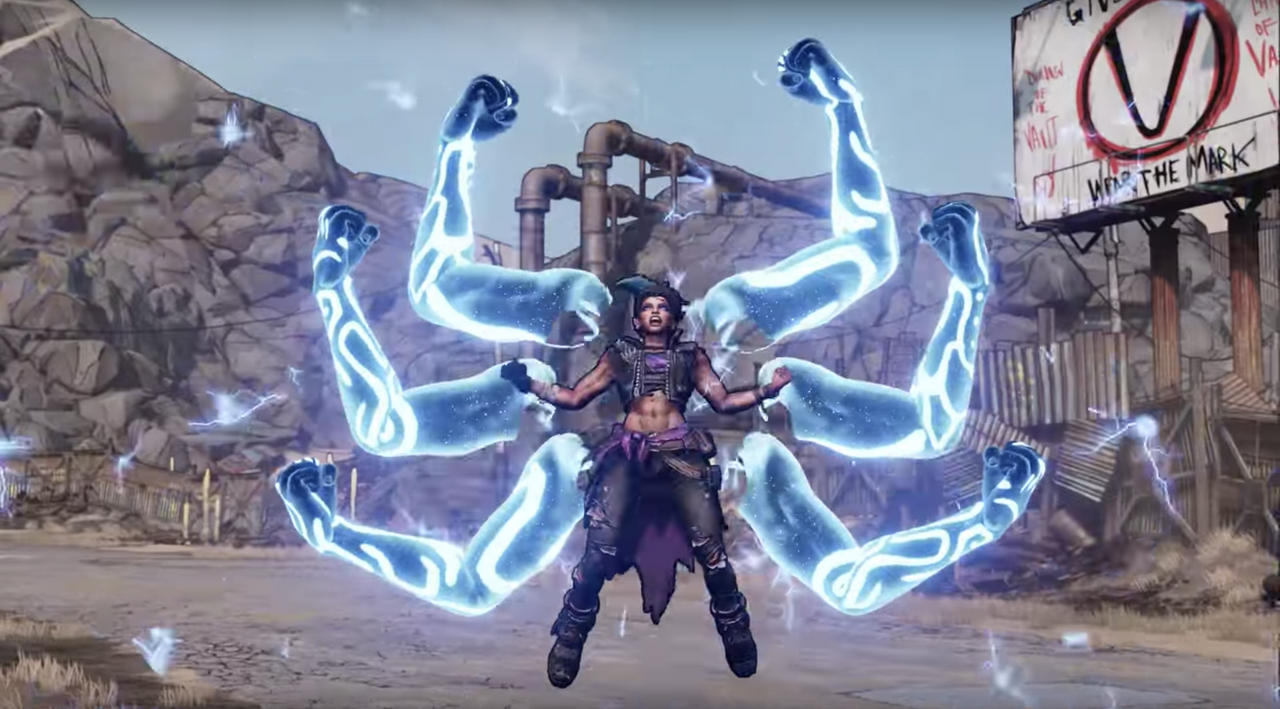 Amara is the only playable character that Randy mentioned by name, yet her name matching up confirms the rest of them. She's a melee focused Siren, as you can clearly see by her gitant pantom arms and extremely ripped bod. One of her action skills named in the leak is some sort of projection power, though we never see this in action that I'm aware of. We do see the other two, however.

One was descirbed as a "ground pound", which to me meant some kind of stomp like The Pre-Sequel. In actuality, though... 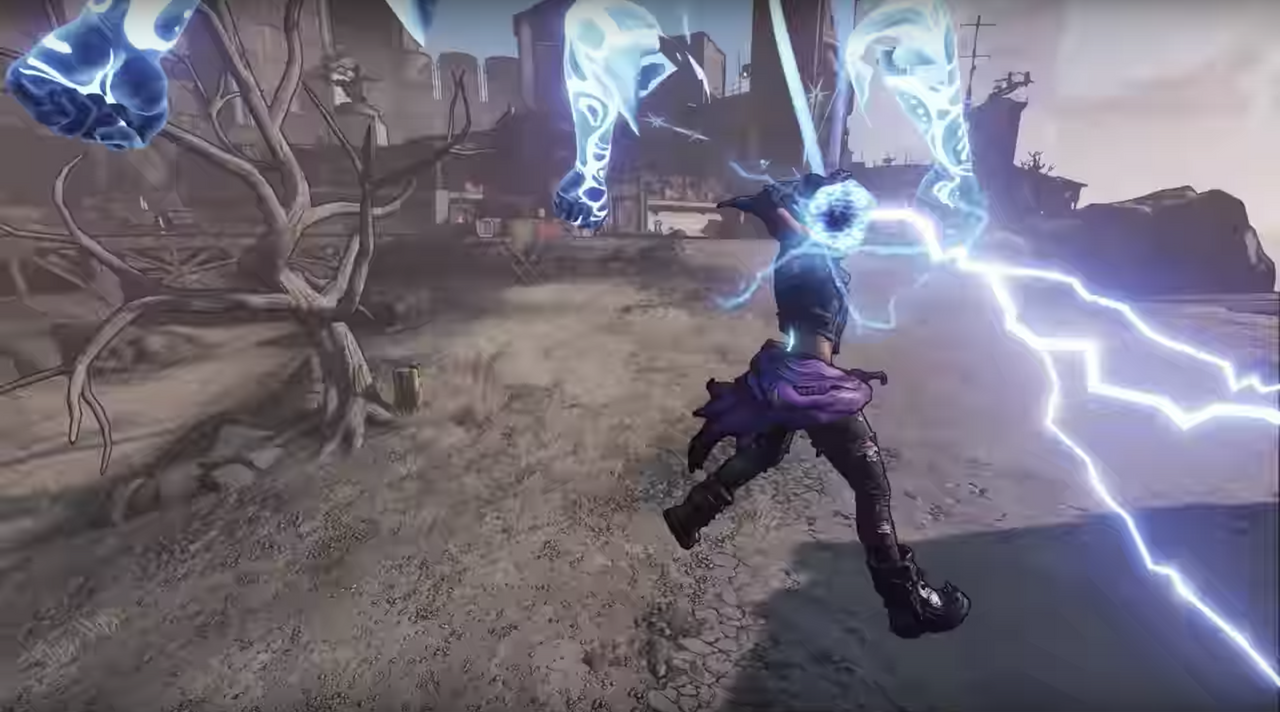 An extremely anime looking maneuver! I think the first shot might actually be her charaging it up.

Her third action skill is a phaselock like Maya, although this one can grab multiple enemies at once. The leak mentions up to three, although she does have six arms so that seems like kind of a waste. 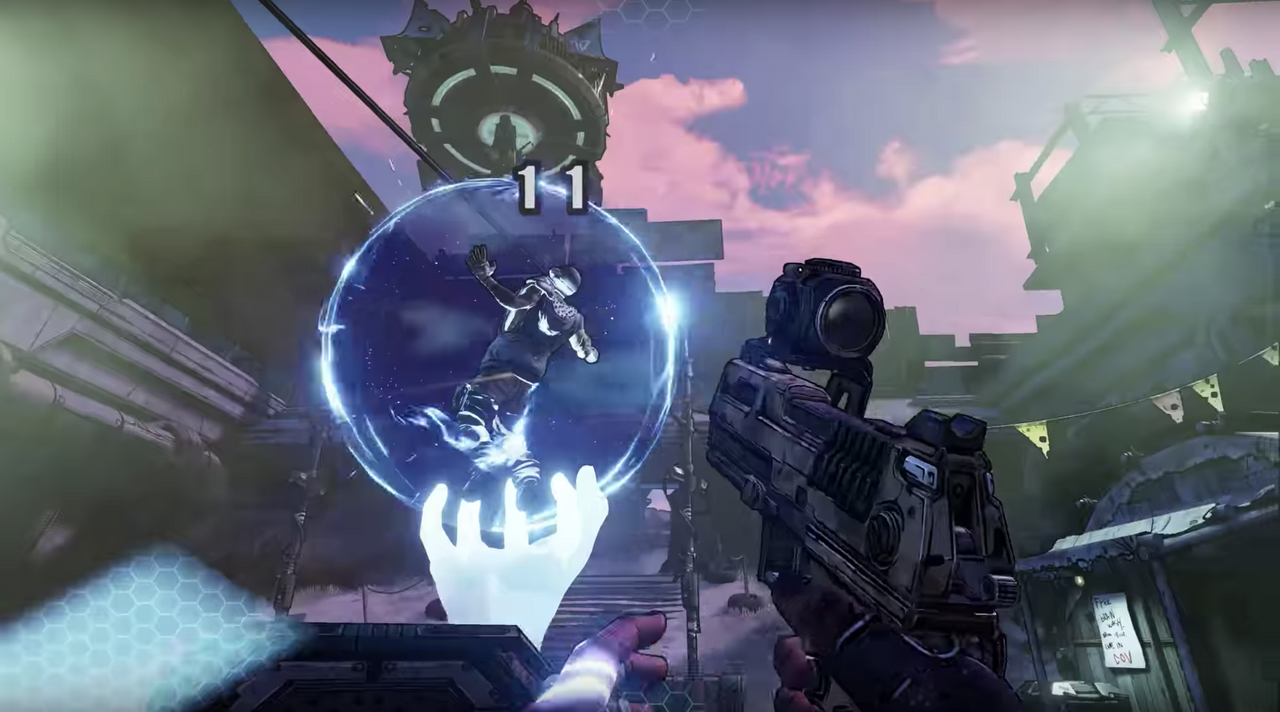 Moving on, did you catch tat one of the antagonists is a Siren? 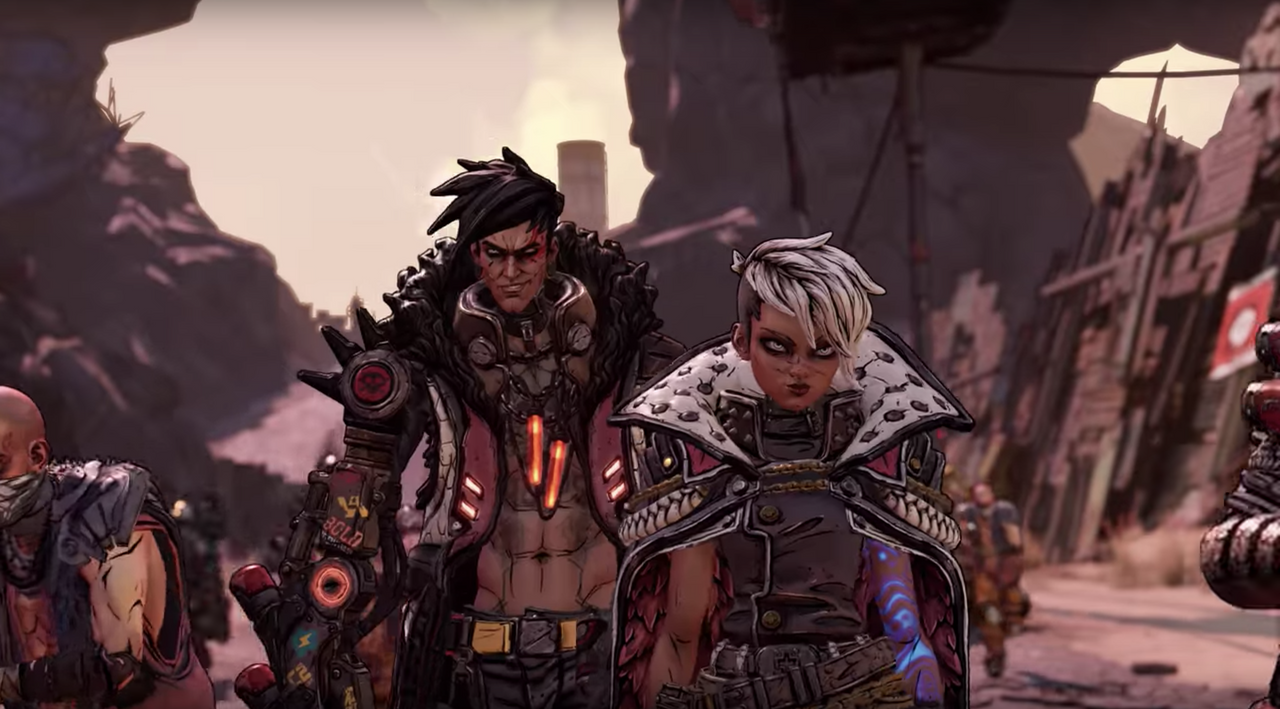 These are the Calypso siblings, probably twins. The leak named them as Tyreen and Troy, and we now know that's correct, as evidenced by this sign: 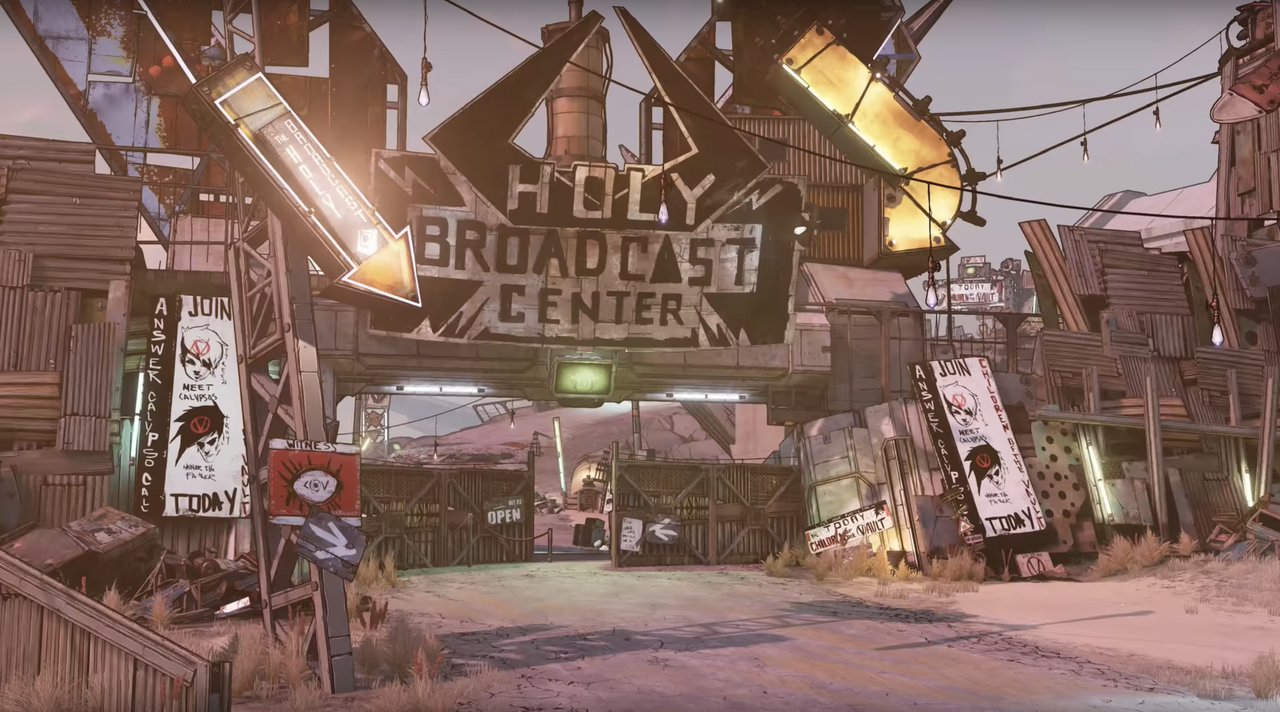 They run a cult called the Children of the Vault. One or both of them has the ability to siphon the power from Sirens. The current speculation is that Tyreen is after the power of Lilith, Maya, and probably Amara, in an attempt to transfer it to her brother. Troy does have red Siren-like markings on his face, and we're not sure what they mean yet.

Looks like Gearbox thankfully didn't throw out the hard work of 2K Austrailia. The cryo element and laser weapons are back!

You can see this here Maliwan robot shooting some icy blasts: 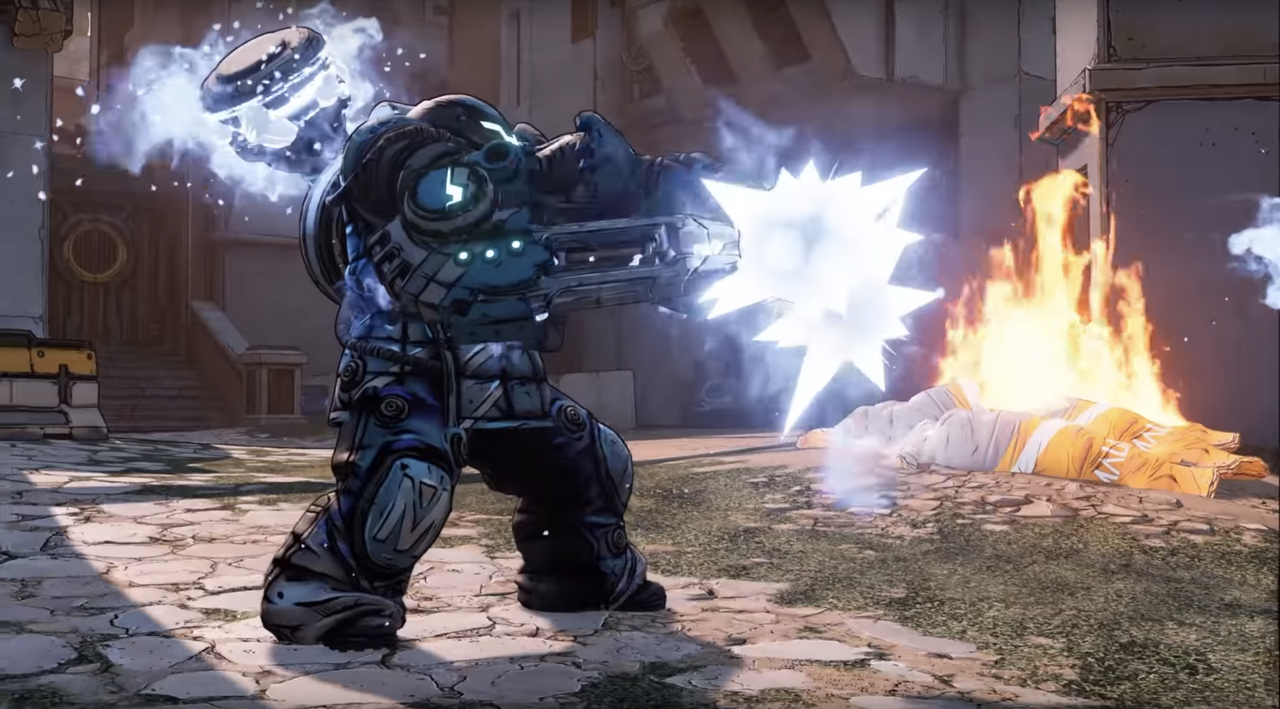 Both continuous beam lasers and the regular pew-pew kind are back: 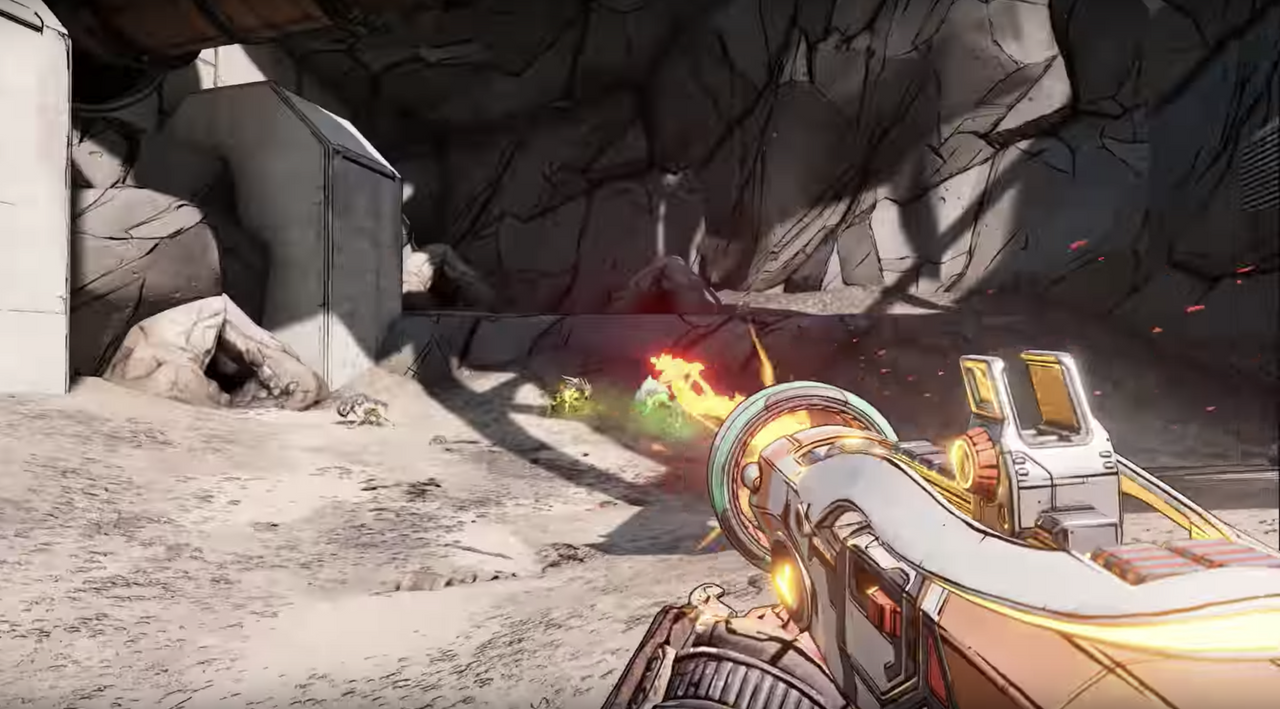 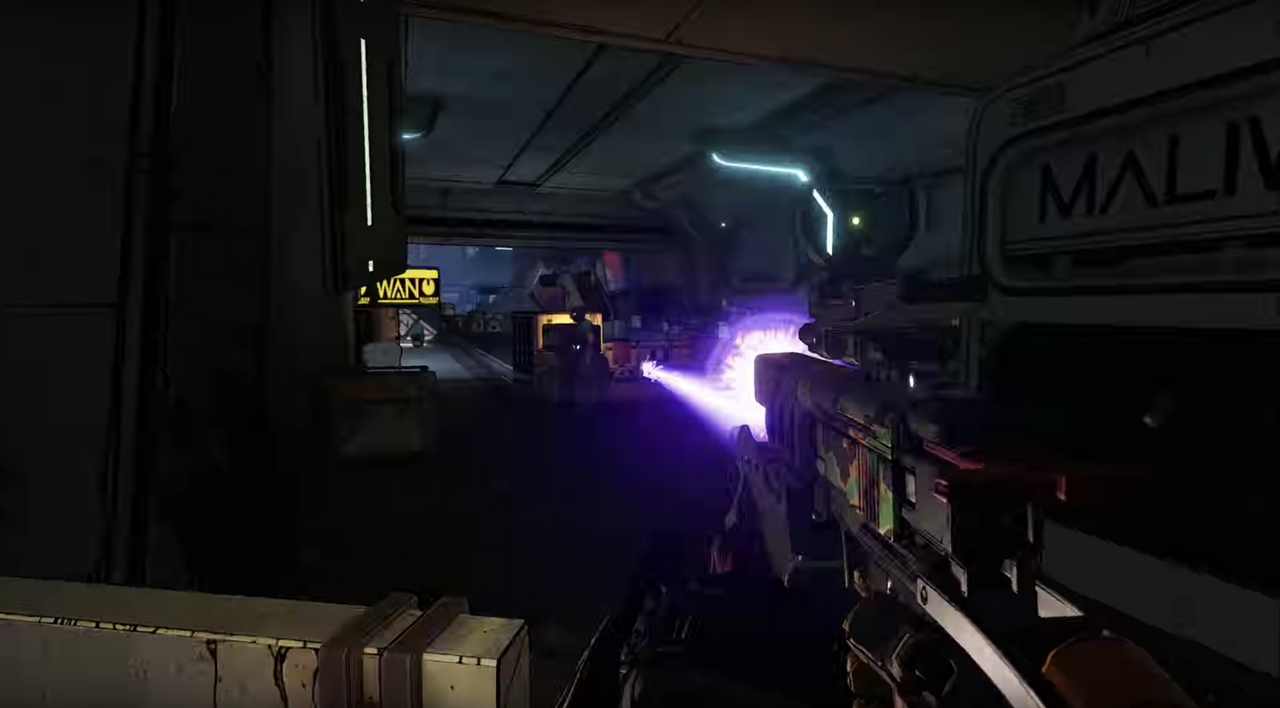 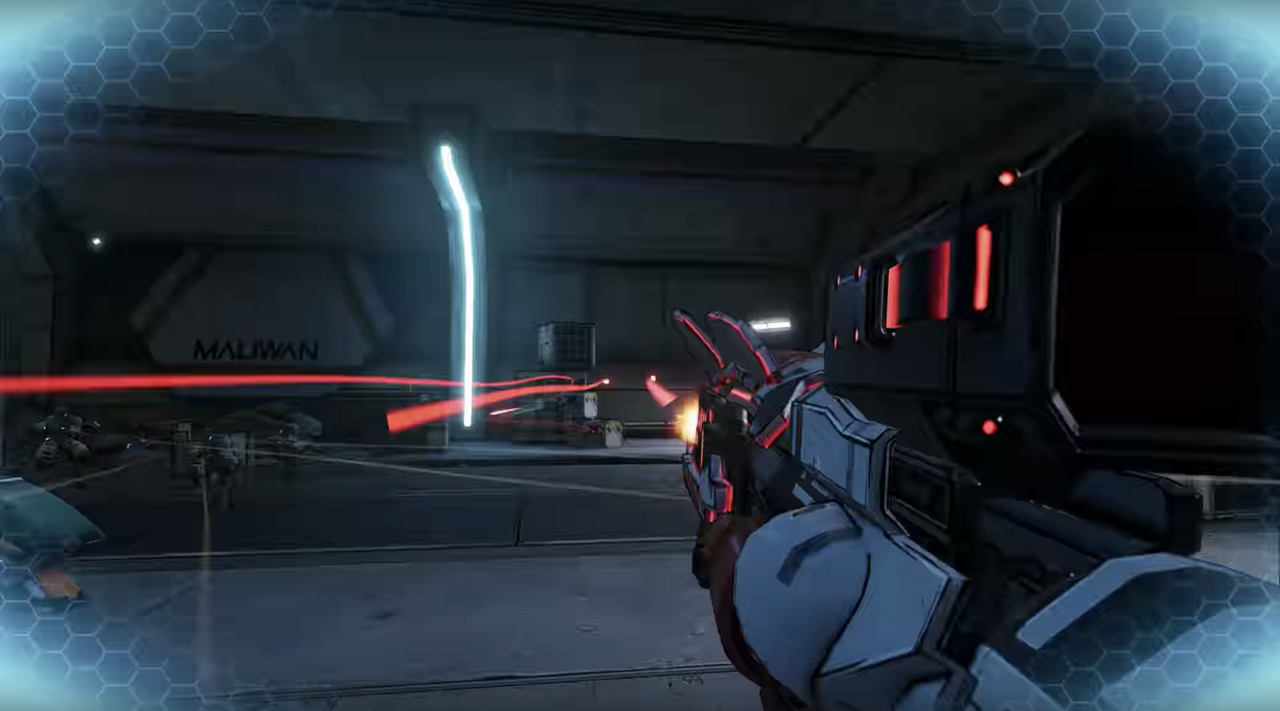 This crazy thing that lobs shots of who knows what: 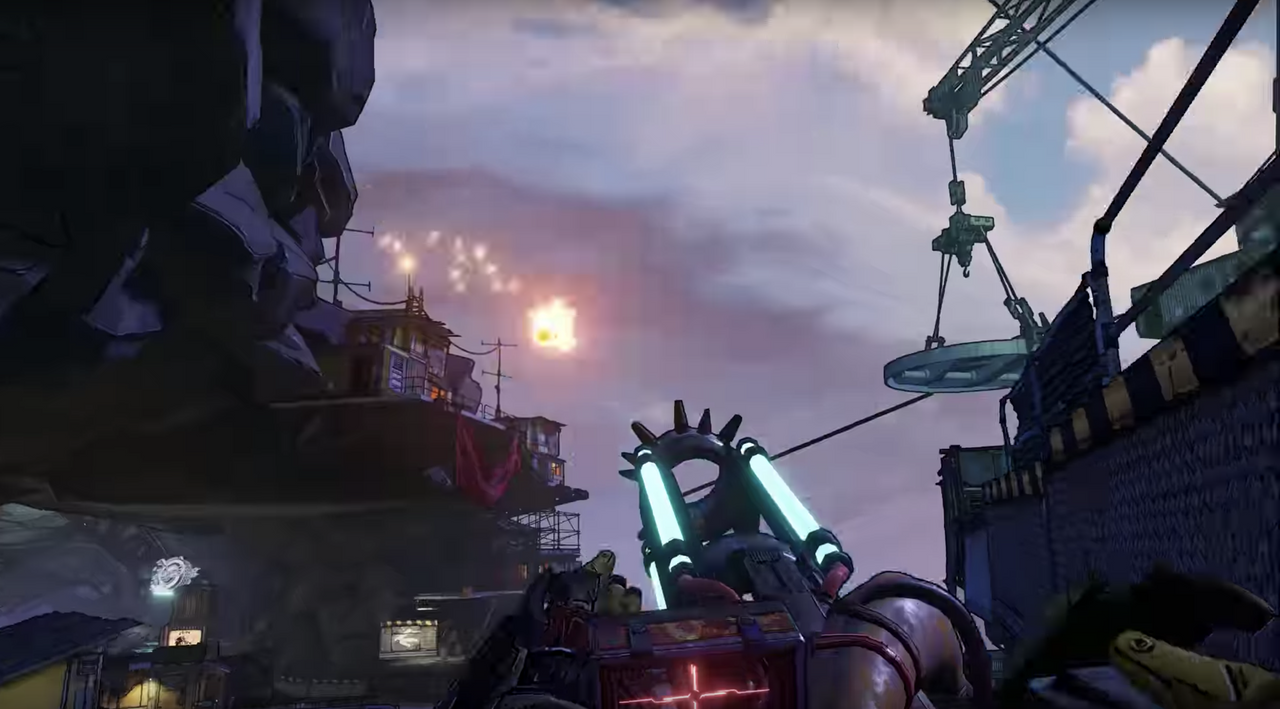 A similar looking weapon with a different barrel: 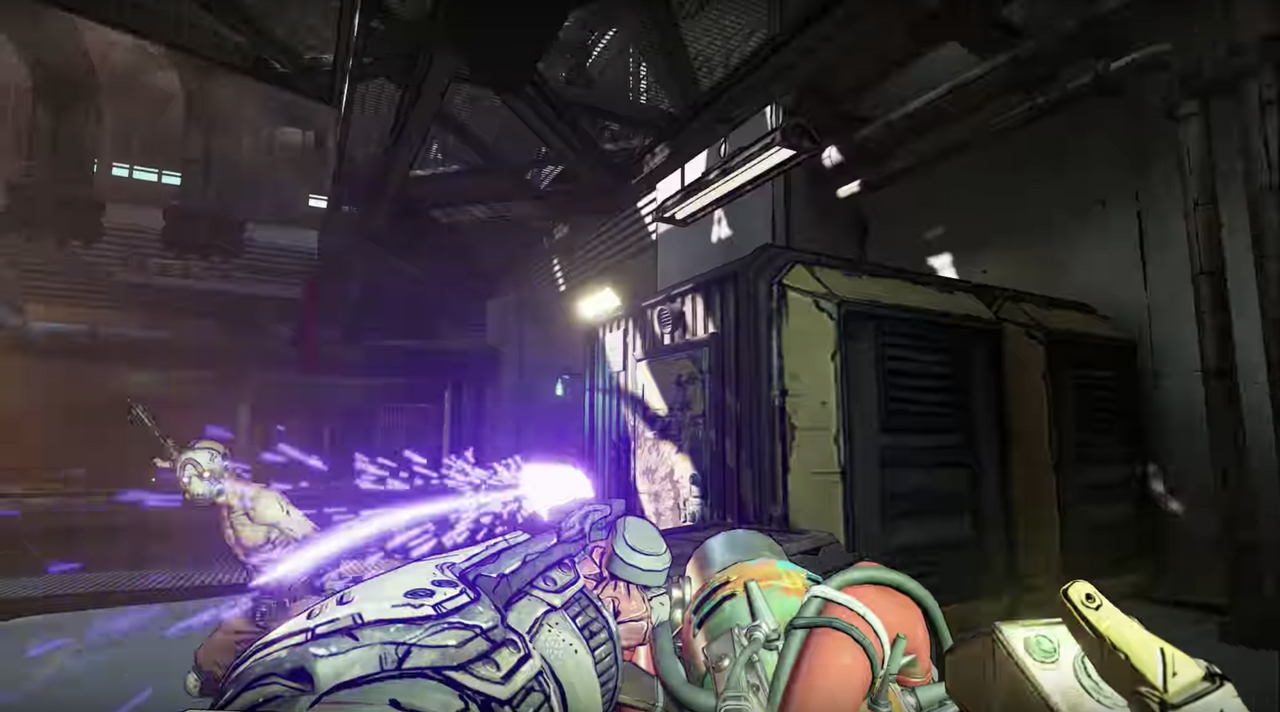 (Quick note: The gun in the first shot has glowing rods on it, which can be seen in several other types of guns throughout the trailer. New manufactuer, perhaps?)

There's this little handgun that has a shot the likes of which I've never seen. Some kind of ball being unleased from a vortex? A new kind of laser gun or perhaps an entirely new type? 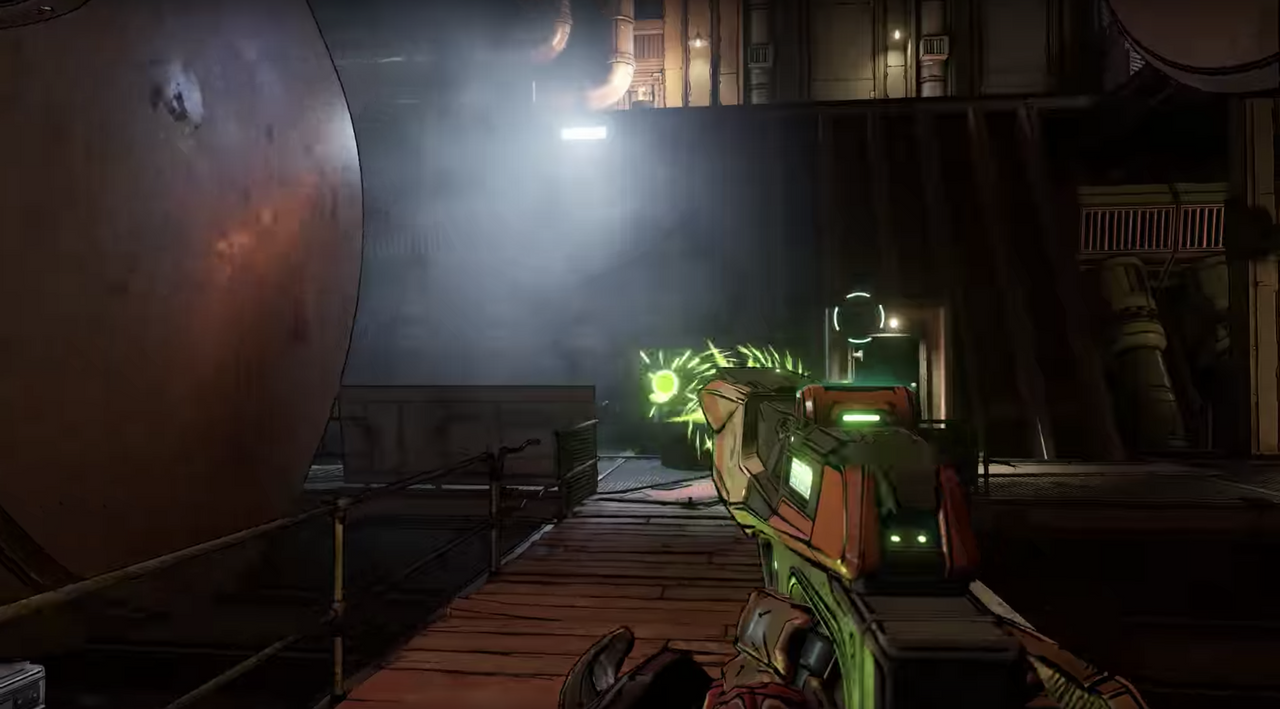 This huge gun looks like it's been corrupted or something. Perhaps a new eridian weapon? 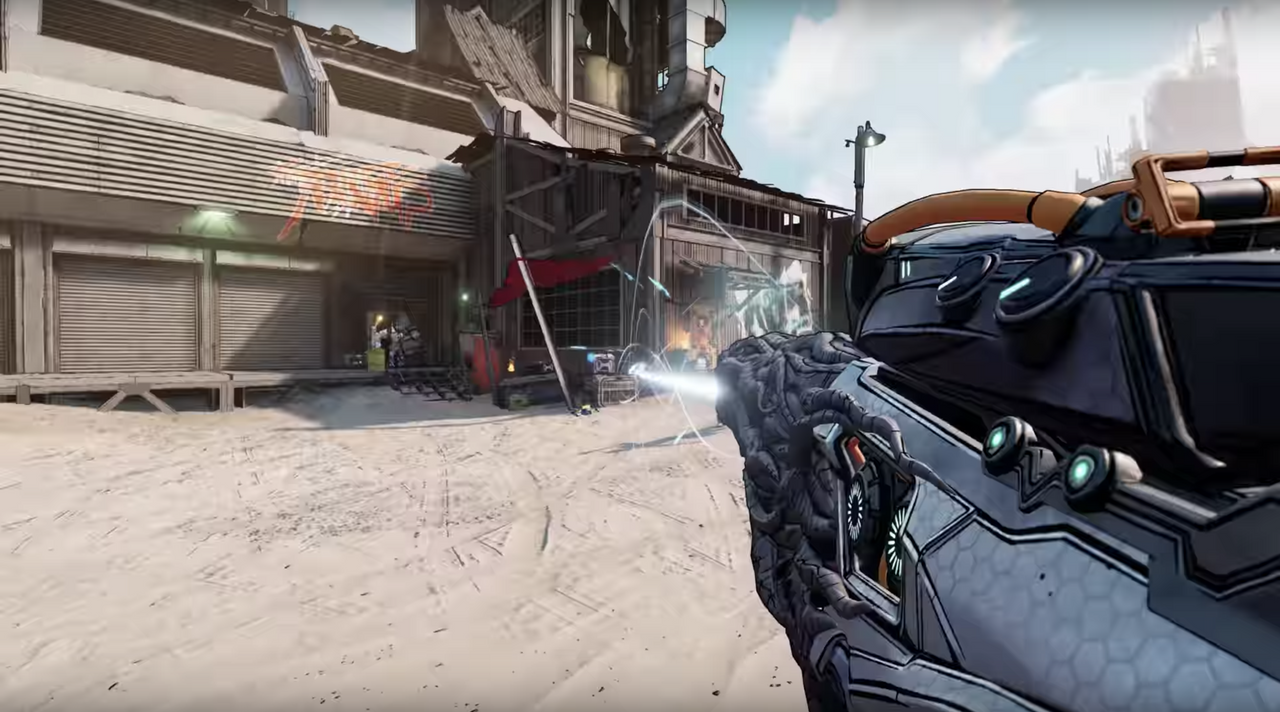 The pshyco in front of these magical floating trees might be wielding a flame thrower. Randy aluded to flame throwers on Twitter once. 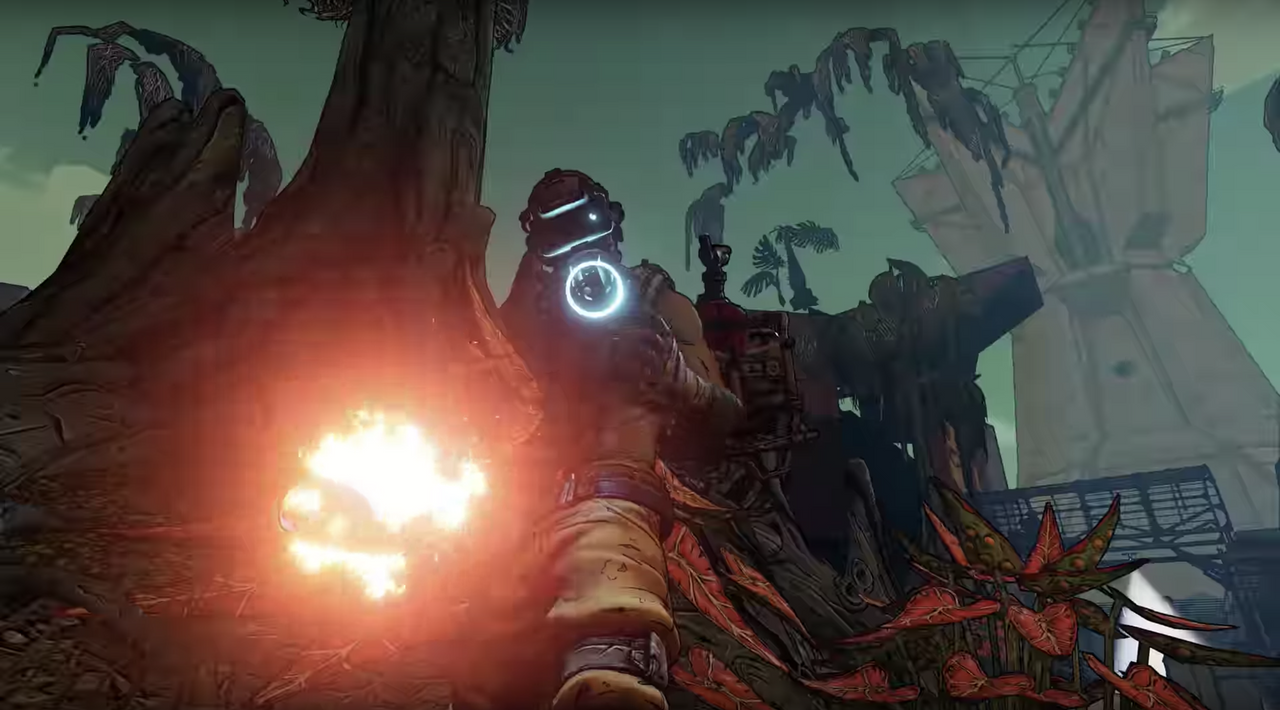 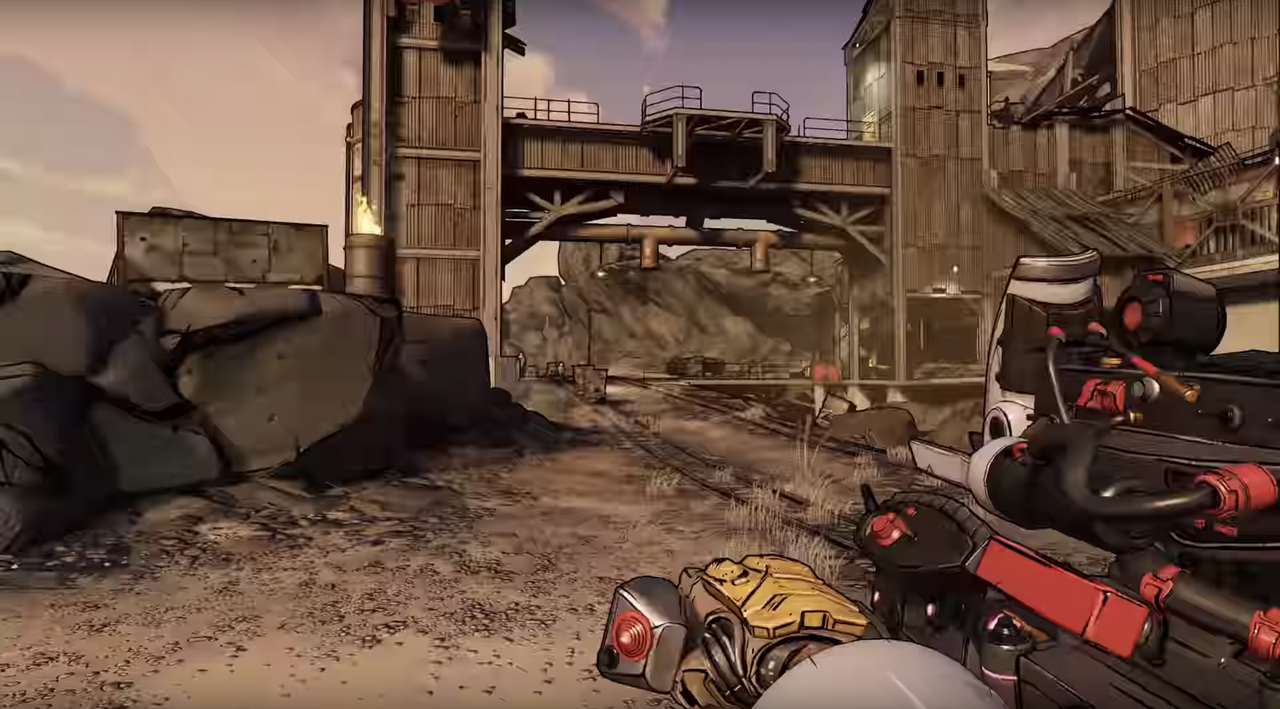 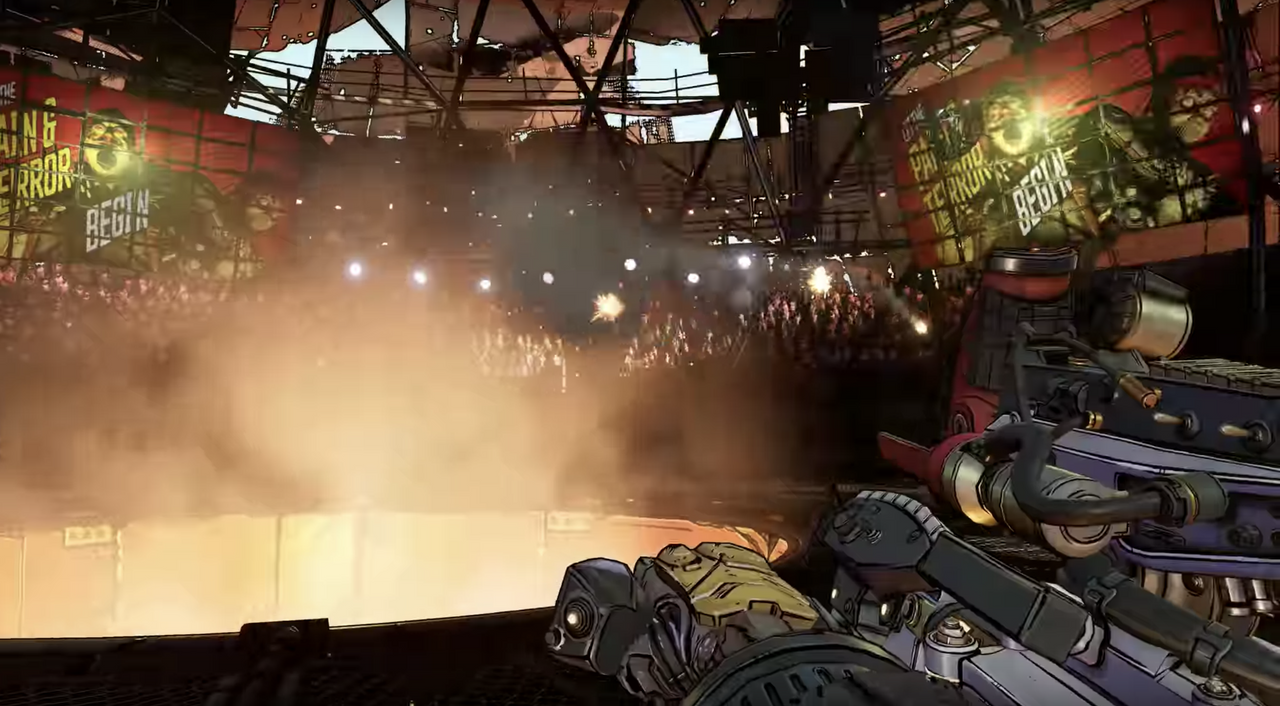 I saw speculation that this is one of Iron Bear's guns, but that is clearly wrong and stupid. First of all, Iron Bear's guns don't look anything like that. Plus, there's two of them, and you'd expect the whole thing to have a unique HUD while piloting it. We see this type of gun several times in the trailer with different designs and being used by at least two different characterst, so it seems more like a new type of weapon rather than a character skill. This one looks like some kind of launcher. However... 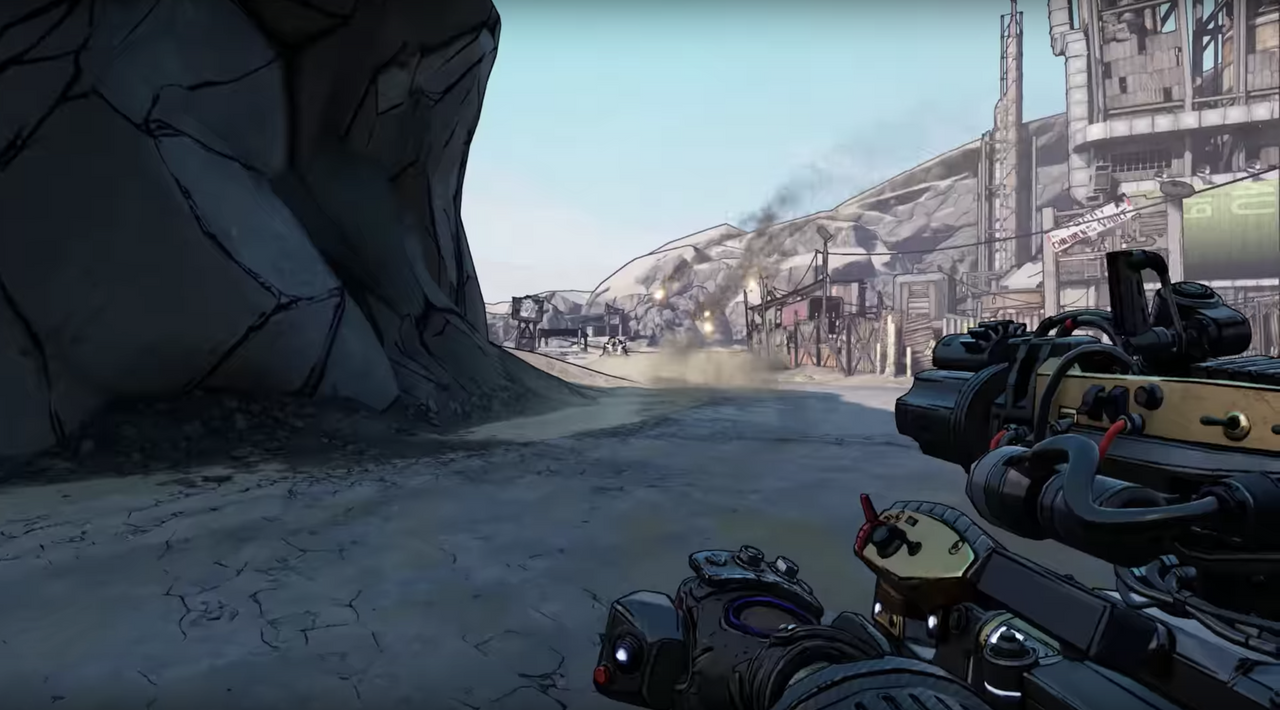 This one has a completely different barrel. 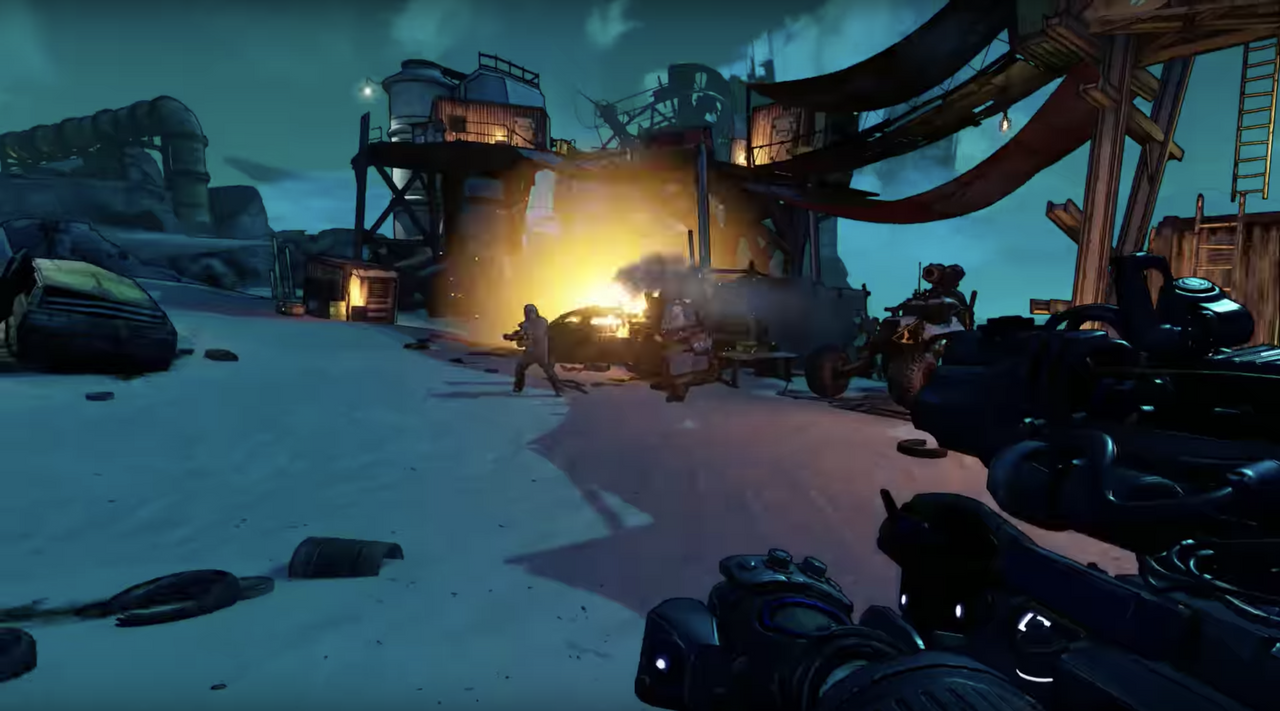 It's interesting to note that the two distinct types we see are used by two different characters. Coincidence? Maybe, or it could have some deeper meaning.

Finally, did you notice you can slide while shooting now? 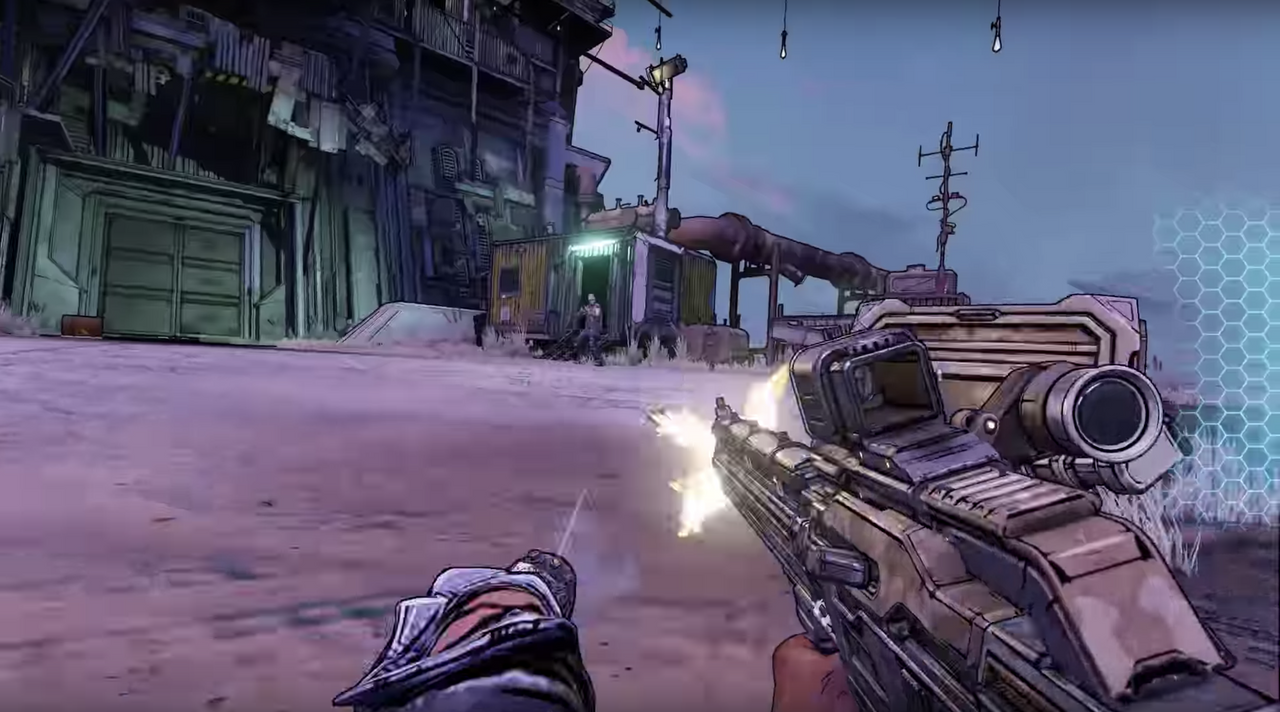 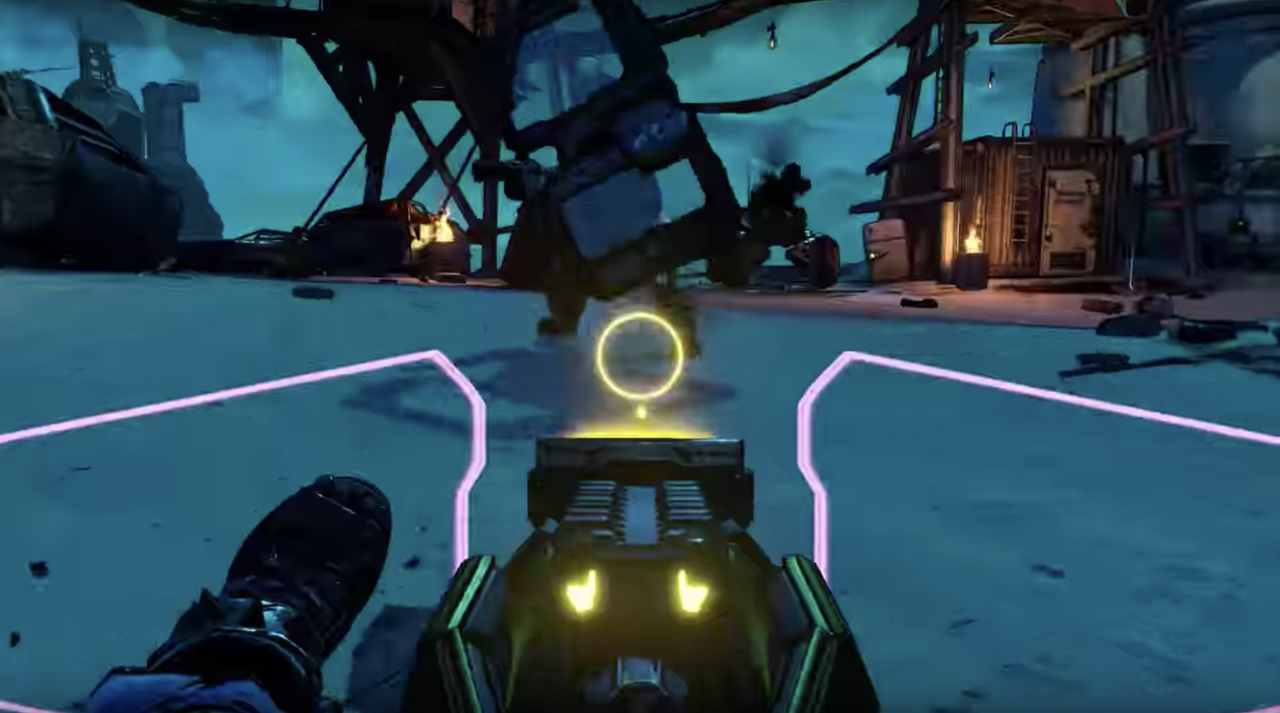 It's total insanity! Between having multiple skills per character, all these new types of guns, and being able to travel to multiple worlds, Borderlands 3 looks crazy huge compared to the last game!