When I was a kid, I only had a few games but all the time in the world to play them. Nowadays, the ratio is reversed. I’ve got lots of games but not enough time to play them all. That of course leads to the dreaded "backlog." In my case, I’m usually pretty good about playing the games that I buy directly, but my backlog has been growing anyway, thanks to bundles and freebies (I’m looking at you, Epic store!).

In the past few years I’ve really been working towards understanding and overcoming my anxiety in all its forms, so when I realized that video games, historically my escape from the stresses of everyday life, were sometimes actually contributing to my anxiety, I started to really examine the issues, and figure out how to tackle them. I think I’ve gotten to a better place with it and I thought that some of you might benefit from what I’ve learned so far. So without further ado, here’s my advice for conquering your backlog.

STEP 1 – REFRAME
The first step, before we actually start trying to reduce the backlog, is to take a step back and really understand the issue. If you think about it, the problem is that you are a gamer and you have a lot of games you can play. Hmmm. That actually sounds like a good thing when you phrase it that way, doesn’t it? So why is this a problem? For some people maybe it’s guilt because you feel like you’ve wasted money on games you haven’t played. I understand that for sure, but you just need to accept that that money is gone. Let that go and instead focus on preventing buyer’s remorse in the future (covered in Step 2). For me, the money can be part of it, but it’s usually more of a feeling that I have a huge to-do list of games that just gets bigger and bigger. I feel like I should be playing them. I think that “should” is the real issue. Instead of looking at your unplayed games as a backlog of things you have to do, look at them as your own personal treasure trove of games you get to play.

Look at all the games!

Would you rather try to make a dent in your backlog or dip into your cornucopia of games? They’re technically the same thing, but the former sounds like a chore while the latter sounds like a good time. You might think this is just pointless semantics, but I think that if you can pull off this bit of emotional jiu-jitsu, it turns the anxiety around your unplayed games into excitement, which makes it a lot easier to stop procrastinating and maybe even helps you to enjoy them more.

STEP 2 – PREVENT
While we’ve established that having an armory of games is great, you can still have too much of a good thing. So how do you prevent making purchases you'll regret? A simple rule is to only buy a game that you have immediate plans to play. You can decide for yourself what timeframe makes sense for you, but I think a week is a good rule of thumb. If you aren’t going to play a game within a week of purchase, no matter how good the sale is, don’t buy it. Remember, sales only get better over time, so unless it’s free, there will eventually be a deal that is as good or better. Besides that, modern games are often improved over time thanks to performance patches and free additional content, so you might be better off playing it later anyway.
So, if there’s a game you really want to play right now, by all means, buy it and play it now. But if you’re buying it because it's on sale and you want to play it eventually, maybe hold off until the next round of sales. They come around frequently enough and besides, you already have a cache of games you can play in the meantime, right?

STEP 3 – PLAY
If you want to reduce the size of your game hoard, there’s only one thing left to do, and that’s to play games! 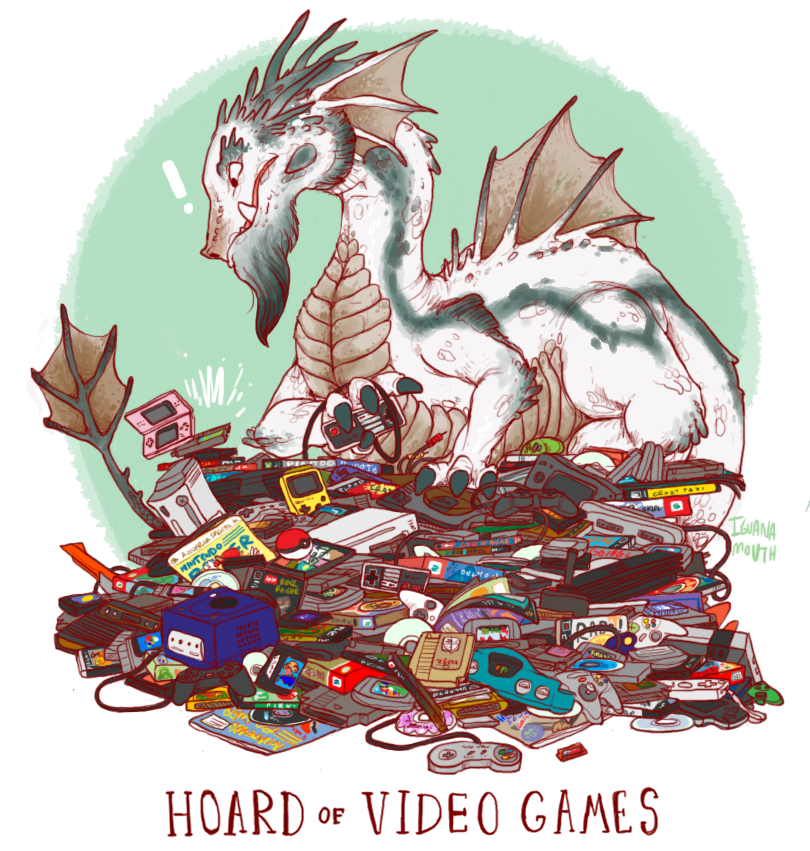 Ok, so that’s not exactly a revelation, but here are a few things to keep in mind when you’re approaching this. They all stem from this cardinal rule. “Games should be fun.”

All that’s left now is to pick a game and get playing. Personally, I’ve been going through by oldest in my game reserves to the most recently added, but you can choose any way you want. If there’s one that you’ve been particularly wary of, it might be worth trying that first, just to break the spell. The rest will seem easy after that. Or you can just pick whatever tickles your fancy at the moment.

Well, that’s about it from me. There’s a lot more I can say about this topic, but I tried to keep it as concise as possible. Let me know in the comments if any of this is advice is helpful to you or if you think I’m way off the mark.