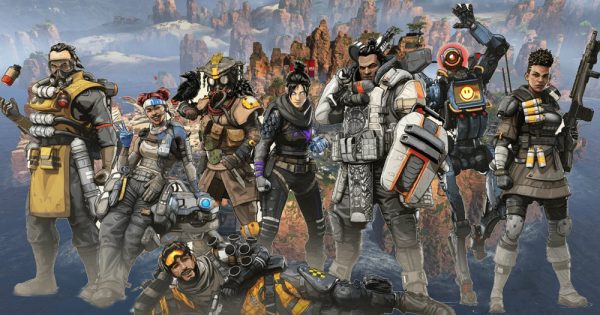 nce is a virtue.

Apex Legends, Respawn Entertainment and EA's recently surprise released free to play entry into the ever-growing catalogue that is Battle Royale, has been well received by casual gamers and critics alike following release. So I thought I'd spend some time with it and see if it introduces any welcome spins on the well-established norms of other Battle Royale games. I have to admit while it was downloading I questioned how willing I was to invest time into another potentially hour-sinking title right now, I also wondered if I was burned out on all this Battle Royale action recently. Turns out I'm not.

I'm usually cautious of diving into yet another battle royale timesink commitment due to playing Fortnite for 5 seasons and a considerable amount of COD:Blackout before relegating BLOPS 4 to almost only zombies and multiplayer (the upcoming additions in Operation Grand Heist may change my mind on blackout though). Wary of being duped by the latest low-effort attempt a successful studio churned out to make a quick buck, I further investigated Respawn's latest offering to the pleasant discovery that it was teamwork focused, class based gameplay, a unique offering in a Battle Royale.

Visually, Apex instantly reminds me of the Borderlands series due to the cell shaded art style; even in the environemental terrain and weapon choices I can't help but see a major Borderlands influence. Nothing insanely impressive on the visual side but a game like this doesn't need to look incredible, as long as the gameplay is solid, smooth and engaging I'll keep coming back to try and scoop a few dubs amongst the chaos. It's also nice to see a major studio prioritize fluid gameplay over high poly counts in favour of stabilizing framerate. I've also found myself appreciating the sound quality in this title. All the explosives, guns, "ring closing" notices sound well fleshed out and impactful.

The unique approach Apex offers through it's character system is a welcome addition to the BR setting. In a weird way, the focus placed on each characters personality and how role-specific each class reminds me of Overwatch'. Coupled with the televised hero deathmatch aesthetic the concept universe is very appealing to me. Customizing your playstyle by selecting one of 8 legends to provide specific abilities to support your 3 member cohort is the highlight here. So far I've spent a good chunk of time with each Legend and each of their abilities are suited well to displace, confuse, misdirect or output heavy damage on enemy squads; other roles are focused on protecting your team. Aerial missle strikes, to decoy holograms, healing drones, to ziplines to poison wielded by the ever-toxic Caustic keeps gameplay fresh. Caustic is one of the unlockable characters (there are two) by way of in-game currency that isn't too ridiculous of a grind to earn without spending cash. The other character is Mirage, the decoy character.

Gameplay itself is very similar in practice, drop-in, loot, encounter, get better gear. I think Respawn has improved on the model by introducing no fall damage allowing for quicker transit, allowing you to increase your run speed when trapped outside the ring by holding Y. The Respawn Beacon concept is great (a mechanic present after your ally dies, you can fetch their banner which is taken to nearby beacons to be brought back into game). Wall running and climbing are also appropriate additions seeing as Respawn worked on Titanfall. All of this rounded out by how well they nailed the gun play. Shooter bliss. The reason I fell in love with the Battle Royale games (apart from grinding out challenges) undoubtedly was the time-after-time intensity of close-combat encounters. My favourite loadout as of right now in Apex is the VK-47 Flatline AR and the Peacemaker shotgun using the Bloodhound or Gibraltar characters. The ability to ping the location is also a useful feature especially when playing with an unmic-ed team.

The progression system is more or less standard competetive fare for a Battle Royale, cosmetic focused unlocks; If you're the type of person who likes grinding for currency to buy skins the Apex checks that box. But Respawn has innovated cleavily with their calling card system here. Each character's stat listing display is unlocked as you continue to use them. Meaning the time invest can result in a pretty impressive accolade banner and a customizable character (quotes activated upon character selction or following a kill, along with final blow animations). This works particularly well; as you play you're unlocking further details regarding that characters personality and rewards players for their investment of time.

If you liked other Battle Royale games chances are you'll find something that appeals to you in this title. If you found the time for Fortnite, PUBG or even going back to H1Z1 look at this as a well-fleshed out follow-up to those titles. I think Apex serves perfect for those tired of BR's they've already clocked hundreds of hours on. It successfully builds on it's predecessors by trying to introduce oppurtunities for strategy focused play and heavier emphasis on role specific teamwork.

Roughly 15 hours of Apex Legends later, safe to say I've thoroughly enjoy my time with it. I've also uninstalled Fortnite (nothing against it, just a stale formula for me at this point) and think I'll probably stay playing Apex instead for the foreseeable future (even though I'm chronically bad at it right now), especially if they keep growing the character roster. There's definetely a learning curve present but that's too be expected with any competetive shooter due to countless players familiarizing themselves with successful approaches and like I said before I'm pretty trash haha.

All up Apex Legends is a well-deserved 8. A more than solid attempt to continue evolving Battle Royale. Respawns maintanience of the community and player base will most likely dictate if they are able to sustain the crowds coming over from other BR's to see what they can offer and I'm excited to watch them try. So far it's been worthwhile.

Some guy who's opinion you shouldn't care about writing about stuff to get better at it. discussion always welcome. Switch, Xbox One, PS4, Bojack Horseman. Still a big Call of Duty zombies fan, Huge smash fan, One Piece is dope also.