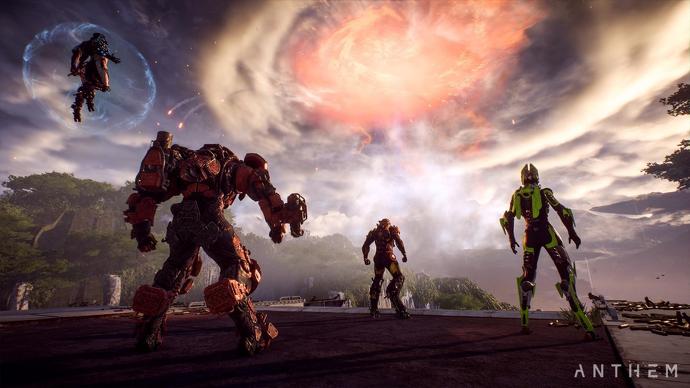 The demo's woes coupled with my own general concerns about another contender for the crown of perennial Shooter MMORPG throwing it's hat in the ever-crowded ring had me doubtful I'd even be picking up this title. That's changed since getting hands-on with the Ranger and Interceptor Javelin suits and navigating, with ease and convienience the well constructed, diverse environments throughout the currently unnamed, beautiful world of Bioware's Anthem through EA Access.

I'm currently running this on a launch Xbox One at 1080p and it looks and runs immaculately. The amount of detail and variance in terrains makes traversing an absolute joy; often I'll catch myself losing focus of the task at hand to look around the vast landscapes in awe of the impressive scale present throughout much of the games early hours. From what I've seen of the map so far, it certainly has the general size of similar games in this genre (The Borderlands Series, Destiny) but here's hoping it expands from the initial areas available in the first 10 hours. Visually and artistically there isn't a complaint to made about this title. Also the sound production is top notch, but the choice to keep audio dialogue between characters in the Javelin suits distorted is a headscratcher and at times comes off as over-saturated and impacts how effective the voice acting can be.

Anthem's gameplay heavily revolves around well-established MMO mainstays such as fetch, spot protection and key item retreival quests to advance the story, level your character and get better gear. There's been enough substance in what I've played so far to keep me entertained and intruiged as to how I can improve my Javelin's abilities, weapons and advance the (to my surprise) reasonably well-serviced narrative that's been weaved. Here's hoping it's expanded upon considerably throughout the duration of the full game. It's feeling like a classic MMO and that's not something I'm upset about. There are daily and weekly challenges present amongst main quests known as contracts.

The combat in this game is possibly it's most unique offering. the multiple options and approaches available when engaging in an encounter in unlike any other shooter I've played. There's a lot of fun to be had with each encounter (especially if you're up for the challenge of the harder difficulty setting; which I'm sure will have a bigger role during endgame character maxing due to the highest difficulties being locked).

Although at times I doubt the longevity of any shooter of this nature due to the high possibility of spending hours slogging through repetitive gameplay littered with bullet sponges and one-dimensional combat sequences; Anthem has me sold on it's combat. The suit is the highlight of this title due to it's customizable abilties, flying barrel rolls and boost dodging deliciousness but ultimately, how EA and Bioware have handled the later game and plan to maintain improving it after launch will determine if it will be worthwhile to sink serious time into a brand new IP with so much other stuff to play. That being said, I've definetely appreciated the high-octane take on this type of shooter. The progression system has held up so far in terms of providing ample oppurtunity to upgrade, plenty of loot that's continues to boost your suit's level and your armor level. the endgame is what I'd need to see to judge the progression system all up, but it's been more than adequate throughout the first portions of the game.

Without a doubt, the first 10 hours of Anthem have me curiously considering the game's long term potential as it stands while simultaneously hoping Bioware has packed it to the brim with sustainable endgame gameplay models. That being said, I've been pleasantly surprised during my time with Anthem so far and look forward to playing plenty more of it at launch. As long there are efforts made to keep the gameplay evolving and difficult I'll stick around to see where Anthem goes. There's potential here, let's hope there's depth.

Some guy who's opinion you shouldn't care about writing about stuff to get better at it. discussion always welcome. Switch, Xbox One, PS4, Bojack Horseman. Still a big Call of Duty zombies fan, Huge smash fan, One Piece is dope also.